There was a fascinating article in a British newspaper recently that suggested that 6 out of 10 people surveyed said that they were “rubbish” at recycling. In the UK it seems, this is more to do with the ever more complicated rules and regulations of recycling rather than a rejection of the concept of sorting out household waste properly. Naturally enough, as we are talking of the UK in this matter, we would expect that if a local authority nose-poker would seek to make the whole process a little more complicated than it should be, because they would have a whole department to which they had to justify its existence. I wonder whether here in Majorca we could do with a little of this ‘jobsworth’ mentality, so as to encourage more of us to re-cycle? I am told that I have become a total bore when it comes to our household waste disposal.

At the moment I’ve got six different bags of waste material on a weekly disposal loop; that includes everything such as - plastic, glass, tins, newspaper/paper, food waste and general garden material. If someone (she knows who she is!) should seek to place an empty tin of tuna in the ‘plastic’ receptacle stand by for trouble and a long lecture whereupon I accuse her of environmental vandalism. Unhappily, she repeats a long held fragment of negative propaganda where it seems that here in Majorca no matter how much we recycling loons compartmentalise our waste, it all gets thrown together because that’s what they do in Spain i.e. pretend to do one thing and then do the complete opposite. Will someone tell me that this isn’t true please? You know, it’s just an urban myth put about by those who seek to faze all of us who try our best to do our duty rubbish wise?

By the way - when I was a lad our family unit consisted of mum and dad plus four kids. Once a week on a Wednesday a whistling bin man would pick up a medium sized metal dustbin and that would be it for another week. Consider this; there are two of us at ‘ours’ and we generate as much rubbish in a day than a family of six would in a week - in the olden days!

ON THE BEACH!
I received the email below from Bulletin reader, Dorothy Grimshaw, about an aggressive beach attendant charging a young couple who happened to lay in the shade on a Calvia Beach. I wonder if her story is that of an individual over zealous beach attendant ‘getting it wrong’ or is it council policy to charge for a towel randomly placed on a beach? If so - I think we (or the targeted tourist) should be told, don’t you? I always thought that island based, beach-bed and umbrella charges were more than a little expensive - but to charge people who aren’t even using the furniture? Come on - perhaps someone at Calvia Council should have a quiet word in the operators about this - as I will be more than happy to clarify the situation via this column. Thank you Dorothy.

Dear Frank,
Having had a holiday home here in Palmanova for 35 years I was horrified to witness a young couple put down their towel to go for a swim at 17:50. As you can see they put their towel in the shadow of the beach owned umbrella, in less than 2 minutes the beach attendant descended on them and told them they could not use the shade of the umbrella to leave their towel to go for a swim, they must pay 13.50 euros for two beds and an umbrella.The beach was empty. Majorca needs tourists! How can anyone ask two people at 17:50 in the afternoon to pay for sun-beds etc? when all they wanted was to leave their towel to have a swim- they didn’t even lie down. As an avid reader of your page in the Bulletin - I bet this one takes the biscuit!

LIVING WITH A LOW LEVEL POUND
You may not realise it, but within the British ex-pat community here in Majorca, there are scores of older people living a life of genteel poverty. I say genteel poverty, because that’s what it amounts to, as a widows pension shrinks at every payment. The pension that the ladies late husband secured through a lifetime of work, is evaporating before her very eyes. Naturally enough this problem isn’t merely about older women, but those who know about these things tell me that it is a real problem that is growing year on year.

It would be silly of me to point to Brexit for all the ills of British pensioners living in Spain, but this steady decline in the value of the pound/sterling is not an imaginary side-effect but is very real indeed. I have been told stories of British pensioners living on pitiable amounts of money, yet were from a generation who wouldn’t like to “make a fuss,” and so make themselves socially and economically invisible.

Think about that the next time a comfortably fat and complacent politician proclaims “A low pound is very good news for our exports.” As if to add poignancy to their plight, we all know of people of a certain age living on this island who were rather keen on Britain exiting the EU as quickly as possible for all sorts of reasons - sadly, the first consequence of their wish coming true could well be their own financial discomfort.

IT’S NOT WHAT YOU SAY….
My pal Donald G made me laugh out loud the other day over a coffee when he told me that he is going to a wedding in Marbella at the end of the month. Anyway, he told me that anyone who is anyone - apparently refers to Marbella as ‘Marbs’ in that throwaway fashion that is so poplar with Z list celebrities nowadays.

This immediately reminded me of a conversation, that frankly, I wished I hadn’t overheard, whereupon our lovely island was labelled ‘Madge.’

For instance, in a half heard conversational fragment at Bristol airport recently, I pricked my ears up over the following - “Yeah, I’m like - flying to Madge…we’er staying in Maga - it’s going to be Mega.” 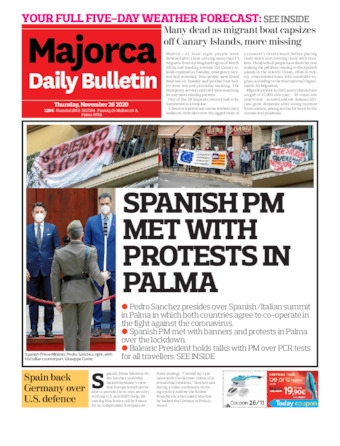