Eat Peruvian when the heatwave is on in Palma

The stuffed mussels were most refreshing. | Andrew Valente

Those who find it difficult (if not impossible) to eat less and lose some weight, should try living in heatwave conditions that last for several weeks. Their weight would soon take a dive and there would be no hunger pains along the way.

Every summer, mainly during July and August, I rediscover that heatwave temperatures not only keep us from sleeping, they also numb our tastebuds to such an extent that we not only stop eating, we don’t want to eat…and so we lose a little weight. 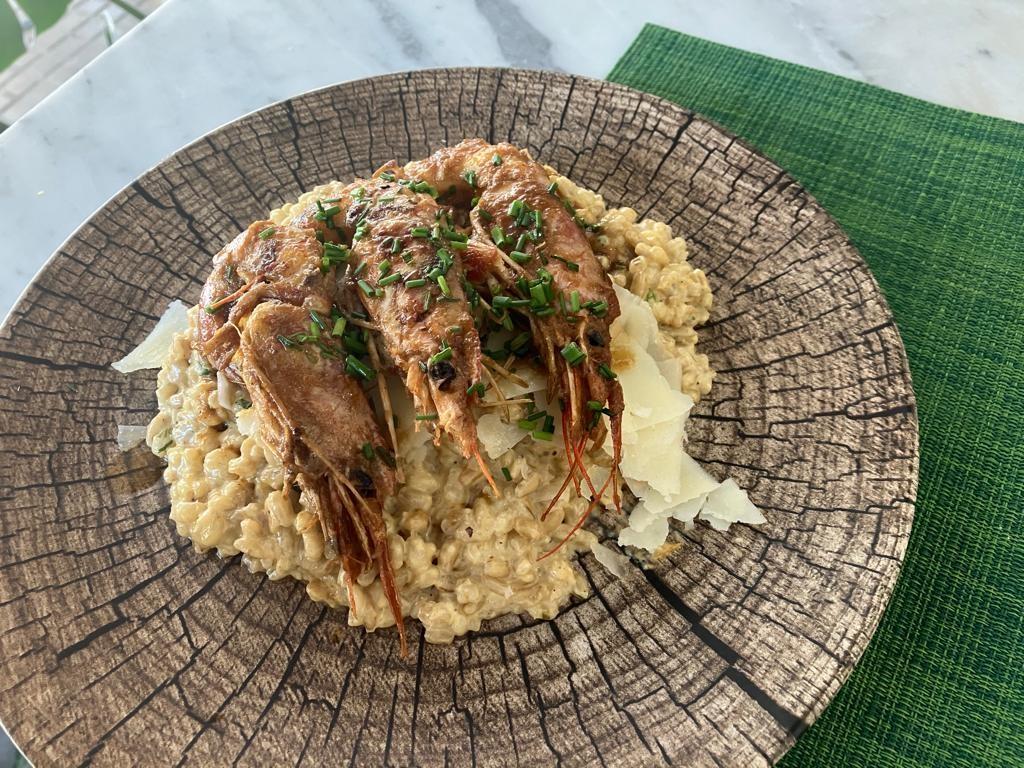 But even during a heatwave I like to sit down for a meal and on the most stifling days I find there’s nothing better than citric-flavoured food to make the digestive juices flow fast — and sometimes furious.

And ever since the Munay Peruvian restaurant opened a few years ago, I can have menús del día in which the citrics are very much upfront, but in small interesting doses. The €16.50 menú del día is served from Monday to Friday and includes a choice of two starters, two mains and dessert. 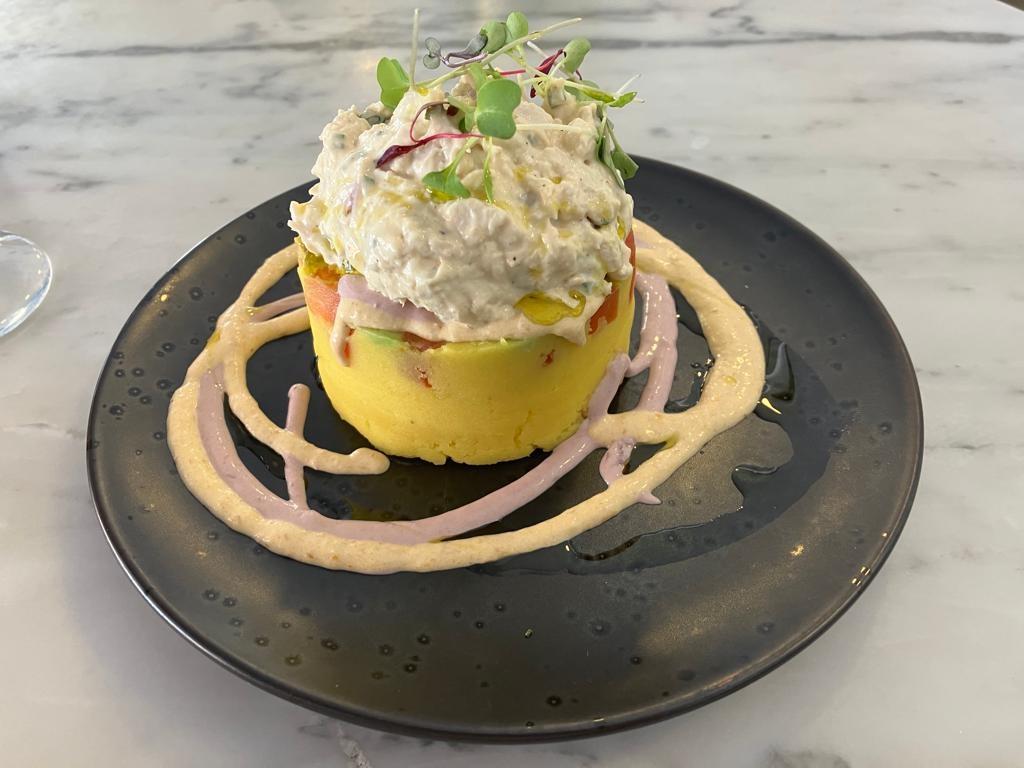 The traditional dishes have names that don’t mean anything to most of us, but each one comes with a little description of the ingredients. We ordered both starters and mains and shared them.
Peru gave the world potatoes and the country has some 200 varieties to choose from. They can be as small as a hazelnut or like a large grapefruit, and they come in an incredible variety of colours and shapes.

Our first starter was a famous cold potato dish called causa limeña. Apart from mashed potato, the dish is made with yellow peppers, a touch of lime, tomato, avocado and a small amount of chicken mousse. 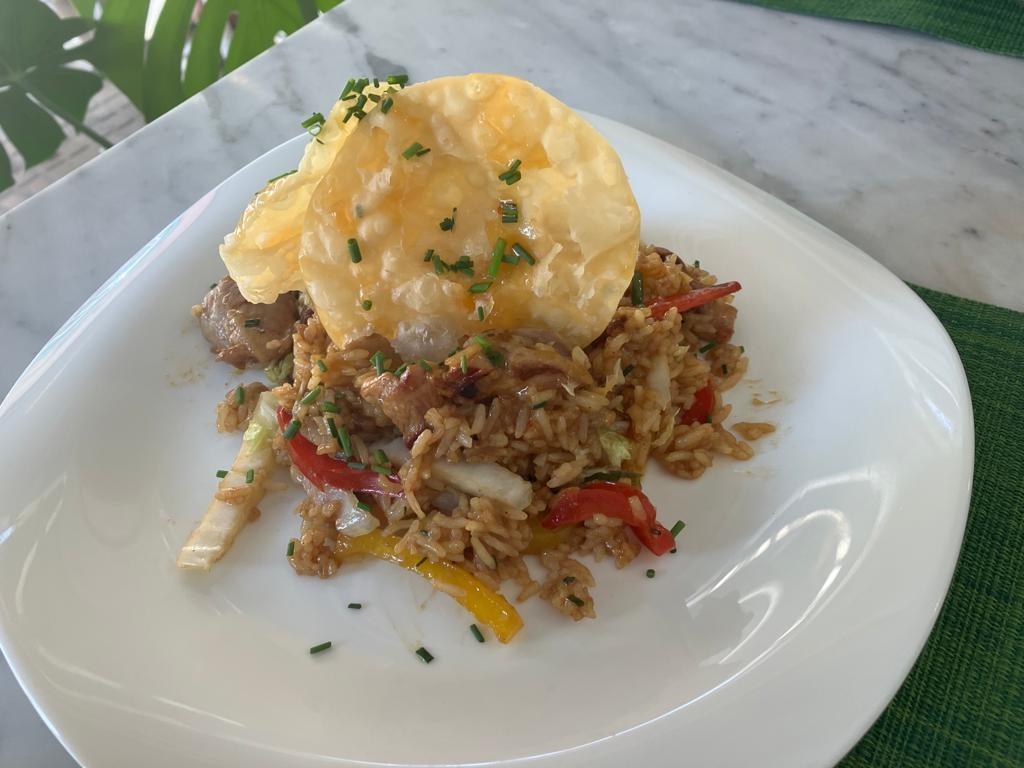 Mashed potatoes are often somewhat filling, but causa limeña is very light, tasty and with a tiny amount of citrics. It was all very moreish and a half portion disappeared very quickly.
The other starter was the perfect dish for a hot day: light, easy to eat, citric, with a touch of spicy heat and lots and lots of crunchy textures.

It’s another famous Peruvian dish, choritos a la Chalaca. Choritos is a diminutive of choro, which means mussel, although in this case the mussels were of medium size. Chalaca means from El Callao, a Peruvian city and province. 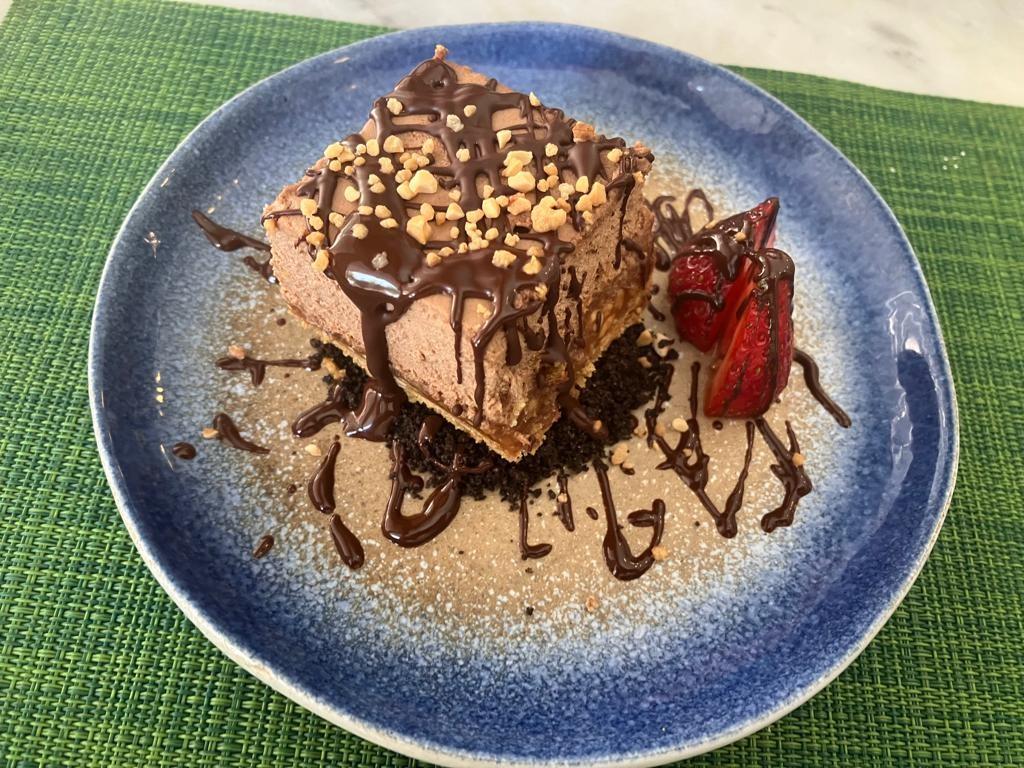 The mussels are served on the half shell and they are spread with finely chopped tomato, peppers and red onion, the crunchy textures coming from two kinds of corn.

It all adds up to exquisite textures and flavours, with the toasted corn kernels, which aren't exactly my favourite flavour, suddenly tasting rather good. Perhaps I’m acquiring a taste for them.
There has never been any need to acquire a taste for Munay’s desserts: they are always highly memorable. 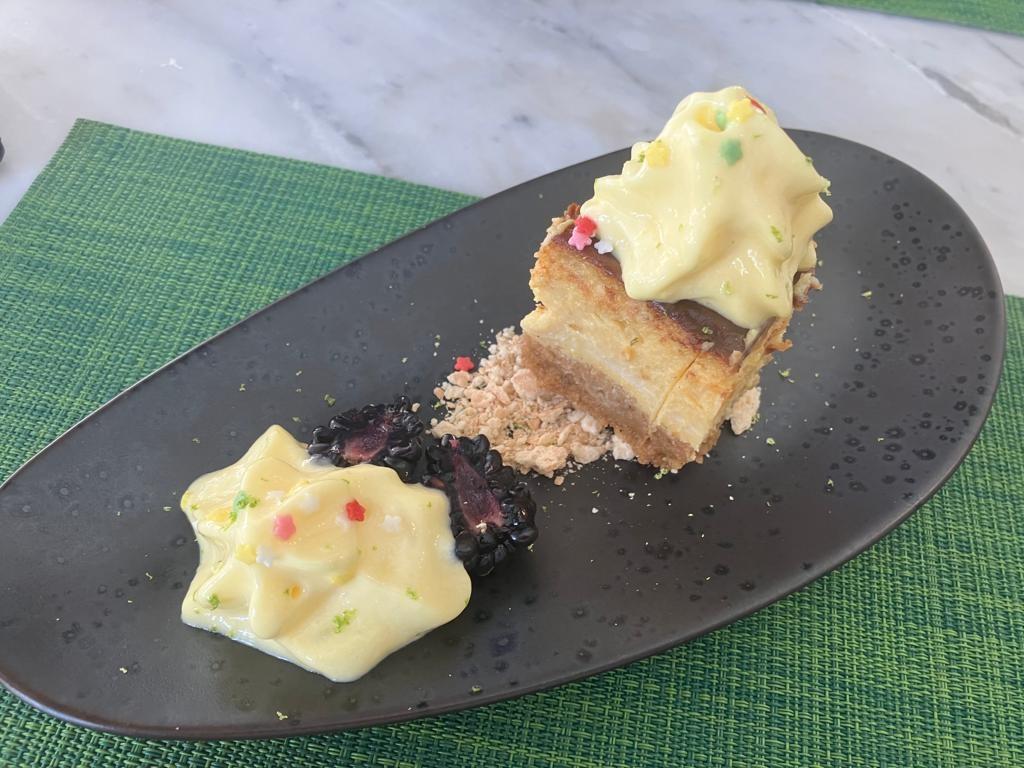 The desserts aren’t actually on the printed menú del día: the waitress simply mentions a couple of names and gives quick thumbnail descriptions. As we’re having one of each, I simply nod my head to both and the descriptions don’t sink in. So I’m never really sure of what I’m eating.
But I do know that both are delicious and the one that could be a kind of Peruvian cheesecake is extremely light and has lovely citrus notes in the background. The one that could be a Peruvian take on the chocolate cake was a more robust and richer affair and it would have been even more memorable if I were having it with my morning coffee.

Next time I’ll get them to wrap it up and I’ll have it next morning with my cafe con leche at the Bulletin.

Restaurante Munay is the place to go for interesting Peruvian dishes. You can have menús del día in which the citrics are very much upfront, but in small interesting doses.

Of the South American cuisines I know, the Argentinian is the one I prefer, but the one I find most interesting is the Peruvian. That’s mainly because of the mixture of different influences, such as the Creole, the African, and the Japanese, among others. Causa limeña, a famous mashed potato dish, was a huge success, partly because the mash was so light and tasty and not at all filling, as it so often is in other dishes. The mussels on the half shell with their citric flavours and crunchy textures were most refreshing, a perfect appetiser for a hot day. The two mains could easily have been somewhat heavy for a heatwave day, but they were also amazingly light. Arroz chaufa was a rice dish with strong Japanese influences but the rice was loose and feathery and didn’t leave us feeling overfull. The same could have happened with a wholewheat dish called trigo cremoso. It came with parmesan cheese and three large gambas but it went over very easily and at no point did we feel overstuffed. I had no complaints about this meal so the full menú del día gets a 10-out-of-10 rating.

Restaurante Munay, Carrer Arxiduc Lluis Salvador 4, Palma. Tel:677-321718. Closed on Sundays. This place is very popular and it can fill up on any day of the week so you should always reserve a table.