Pomegranates are rich in antioxidants and flavonoids, both of which prevent free radicals from damaging human cells

The pomegranate used to be an autumn fruit par excellence and you didn’t see it at the market until about mid-October. But like many other popular fruits, its season started to get earlier and earlier and this year I noticed the first arrivals in mid-August.

The pomegranate has a cherished place on the Mallorcan culinary calendar, and islanders are very fond of them. They are eaten straight as a dessert fruit and the seeds and juices also find their way into salads, desserts and other dishes. Whether used as a dessert fruit or as a means of adding visual impact, textures and flavours to a wide range of dishes, before we can make use of this fruit we have to access its seeds.

In most fruits the seeds are a bit of a nuisance but in the pomegranate the seeds are the fruit and they make delightful eating. We all have different ways of getting at the seeds so you must also pick one you find easy and which doesn’t cause too much of a seedy mess. If a pomegranate is at its proper degree of ripeness you can cut off a small slice at each end and then carefully peel it and scrape off all traces of pith. The clusters of seeds can then be broken up and used. 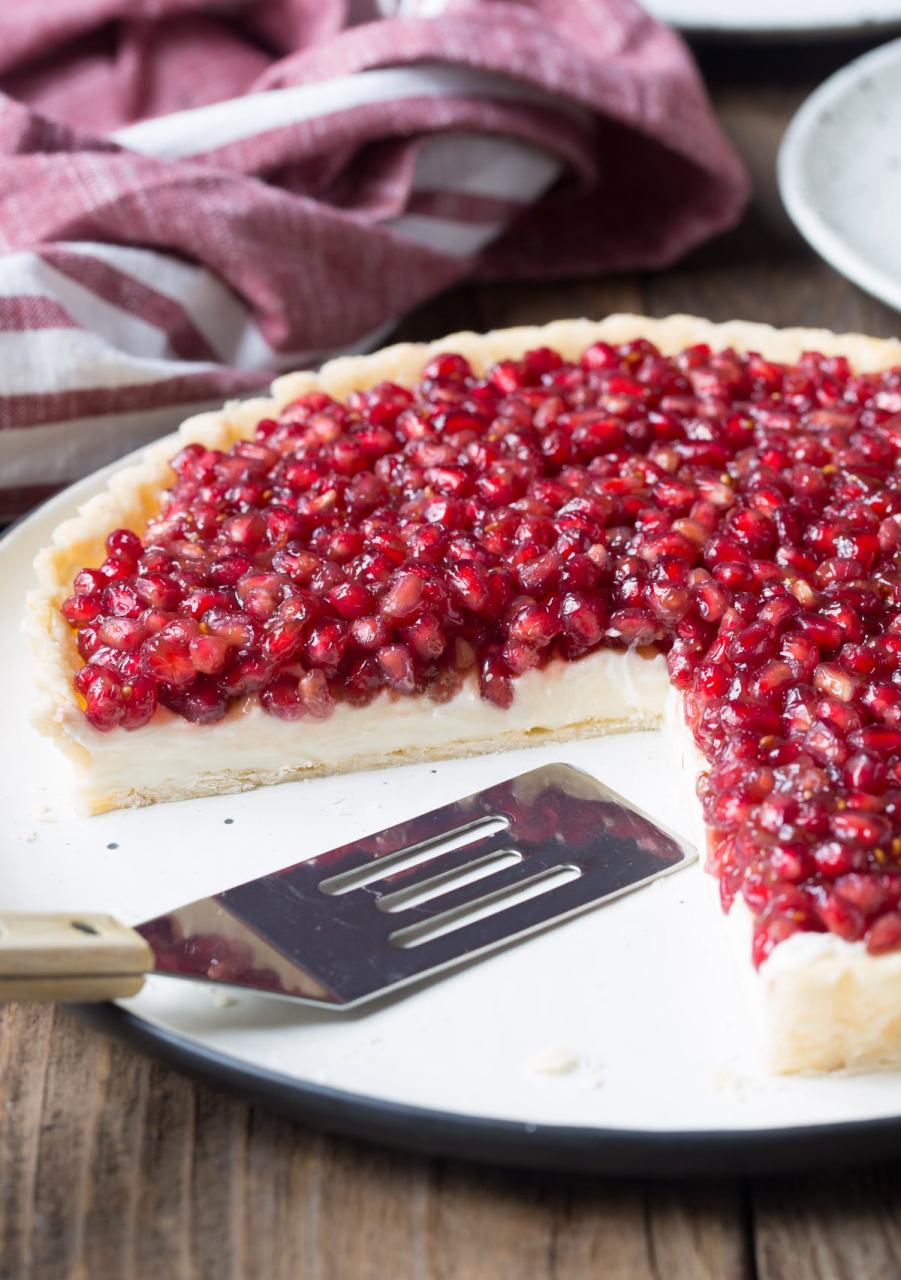 Another way that works well is to slice the unpeeled fruit into wedges, separate the clusters from the skin and then pick off the pith. I’ve never seen Jamie Oliver deseed this fruit but I’m told he simply cuts it in two, gently presses each half with his fingers, holds it over a bowl, taps the skin firmly with the back of a spoon — and the seeds come raining out. Once you have the seeds in a bowl, glistening like tiny precious stones, you can add them to salads as crunchy textures with lots of taste, use them as a sparkling topping for desserts — make fresh pomegranate juice.

You can also eat the seeds on their own. Several of my Spanish friends simply put them into a suitable small bowl and then get to work with a teaspoon. There’s something very sensual going on in your mouth when you crunch your way through them. Possible dishes include a salad of warm sliced aubergine, the seeds and chopped and sautéed red onion. This make a delish spread for toasted pita bread. Nuggets of boneless chicken can be sautéed over a high heat until tender and juicy and then finished off with plenty of seeds and roughly chopped fresh mint.

Any of the winter salad leaves, especially the colourful radicchio, can be mixed with crushed walnuts, sprinkled with the seeds and finished off with a fresh minty vinaigrette. If you reduce pomegranate juice to a thick syrup you will have what is known as pomegranate molasses that can be used for adding a bit of tangy zing to dressings and marinades, as well as giving a fruity glaze to roast chicken and lamb. The molasses can also be stirred into stews and casseroles 10 minutes or so before they are ready, and the plain juice is great for basting roasts of all kinds. 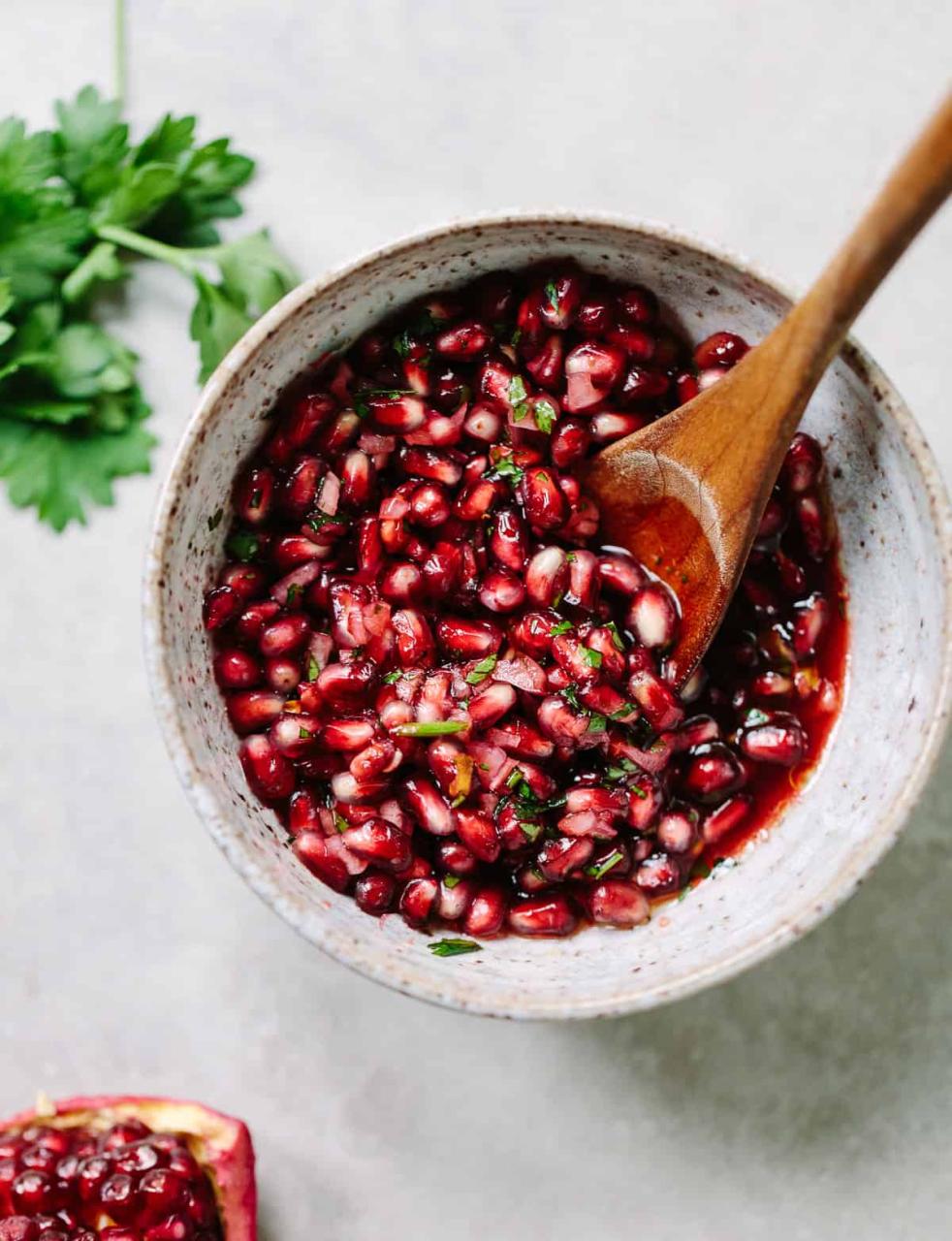 Veggies that are roasted in the oven or on a hot plate can be given a lovely sticky glaze with the molasses. Lightly crushed black grapes would add a dramatic touch of colour and a note of extra sweetness. Any Middle Eastern stuffing you use for roast chicken or boned leg of lamb will look absolutely splendid if you add a good handful of seeds.

A most nutritious and tasty vegetarian luncheon or supper dish can be made by roasting thick slices of feta cheese on a bed of cherry tomato halves, everything well drizzled with virgen extra olive oil and with a good sprinkle of fresh or dried herbs of your choice. When you have baked or sautéed spicy shoulder or leg of lamb nuggets, serve them atop cous-cous flavoured with warm Middle Eastern spices and a tiny touch of harissa.

An Asian street food dish called bhel puri is made by mixing the seeds with roughy chopped roasted peanuts, a little cracked wheat, any kind of broken buckwheat pasta, puffed rice and Oriental herbs and spices of your choice. The pomegranate tree is native from Iran to the Himalayas in northern India and has been cultivated since ancient times throughout the Mediterranean region of Asia, Africa and Europe.

Along with vines and figs, pomegranates were among the first fruits cultivated by early humans in Asia Minor. Excavations in Mesopotamia show they were already part of the human diet 5,000 years ago. The Phoenicians introduced pomegranates to the African continent when they founded Carthage in 814BC.

At one time pomegranate seeds were said to number 613 — one for each of the 613 laws in the Torah, the law of God as revealed to Moses. But the fact is that the pomegranate’s seeds can number from as few as 200 to as many as 1,400. Pomegranates are first mentioned in the Bible (Exodus 28:33-35) as part of God’s instructions for the making of priestly garments. Brass designs were later featured in the building of Solomon’s temple. These ornate pomegranate sculptures were part of the plunder carried off to Babylon when the temple was destroyed (2 Kings 25:17; Jeremiah 52:22-23).

Pomegranates are rich in antioxidants and flavonoids, both of which prevent free radicals from damaging human cells. In some studies, pomegranates show potential to be effective in preventing prostate, breast, lung and colon cancers. Regular consumption helps in improving gut health and digestion. As with most foods, we should eat pomegranates in moderation. A serving of 100 grs contains 64 calories, 14 grs of carbohydrate and 14 grs of sugar. But don’t let that put you off too much. That serving also contains 7 grs of fibre, 3 grs of protein and 30 per cent of the recommended daily amount of vitamin C. Just don’t get too hooked on them.