Picota: The Red diamonds of Spain

Cherries on a tree.

In the Jerte Valley in Extremadura, there’s one time of year where a million trees swell with tiny red fruit. These little, shiny cherries are only available from June to the end of July, but they’re some of the best in the World, so much so that they have Protected Designation of Origin (PDO) status. They are Picota cherries and they are in season right now.

Cherries have been grown in the Jerte Valley for centuries, but since the 1960s they’ve become a tourism attraction in their own right. Much like the sakura cherry blossom in Japan, Picota cherry trees blanket the valley in white petals, creating a stunning scene that attracts people from across Europe. But what makes them so special?

The first thing you’ll notice is they’re sold without stalks as the cherries are left to ripen fully before being picked by hand, which means the stalks drop off during the harvest.

The second thing you’ll notice is the unique shape of the fruit itself. Unlike other cherries, which are round, these ones come to a natural point, hence the name Picota (pico is Spanish for peak, or point). And when you taste the cherries, it’s impossible to ignore the incredibly intense, sweet flavour. This is thanks to how the cherries are grown; they are left to mature for twice as long as usual, basking in the Spanish sun which allows the fruit to develop its flavour and colour.

Fresh cherries are high in energy-giving carbohydrates and are an excellent source of vitamin C. Picota cherries have floral and spicy notes making them perfect partners for sour cream, vanilla and lemons. They also work well with almonds, brandy, coffee, mint and, off course, chocolate.

I love to serve them in one of my classic dishes at the restaurant with smoked rice, eel & spiced cherries. A big bowl of fresh cherries are also the perfect accompaniment for cheese and help to cut the richness of wild game, duck and Foie Gras. Preserved cherries are normally, horribly sweet and glaceed cherries are possibly one of the most awful ingredients ever invented, so buy them fresh and enjoy the fantastic flavour on offer in the all too short picota cherry season.

This French classic with cherries is delicious when served slightly warm from the oven.

Whisk the eggs, egg yolks and sugar until light and fluffy. Open the vanilla pod and scrape out the black seeds. Add the cornflour, vanilla seeds and cream to the egg mixture and whisk until well blended. 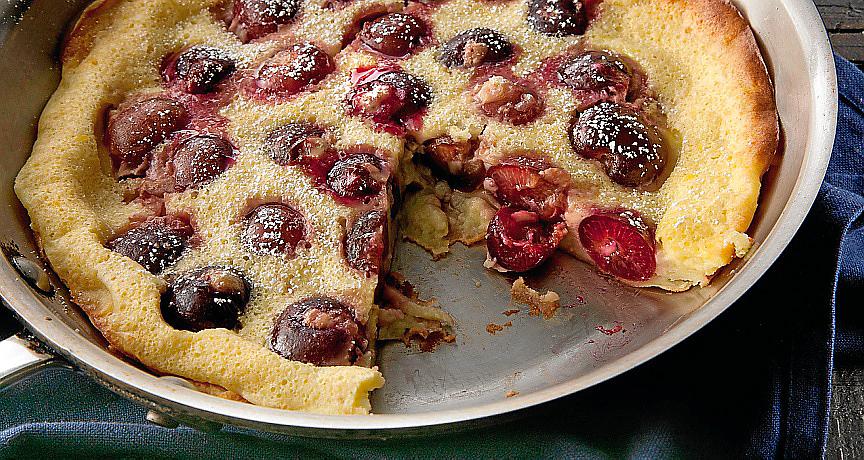 Heat the cherries in an ovenproof dish until they start to soften. Add the batter mix and bake in a hot oven (220ºc/gas7) for 25-30 minutes until golden and firm.
Leave to cool slightly, dust with icing sugar and serve with creme fraiche and chocolate sorbet.

Melt the chocolate in a bowl covered with cling film set over a pan of warm water. Whisk the egg yokes, lemon juice, lemon juice and sugar in another bowl set over simmering water until light and fluffy. Carefully fold in the melted chocolate and leave to cool. 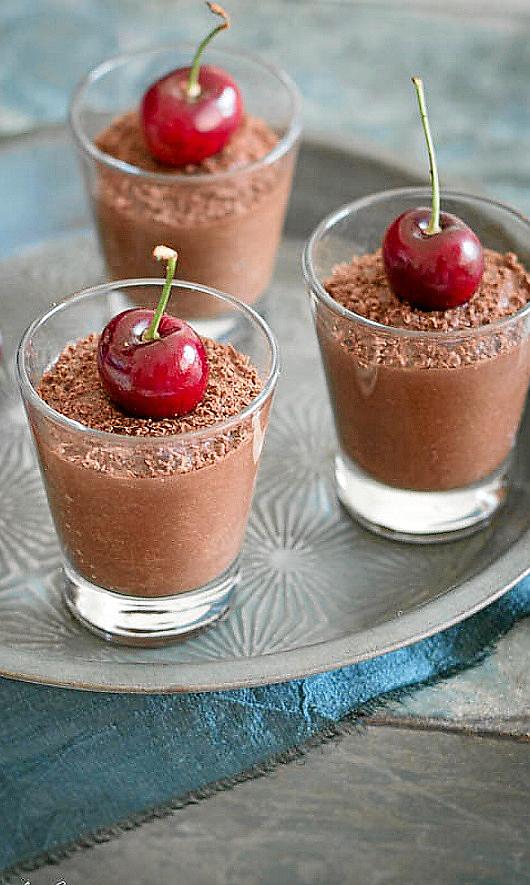 Whisk the cream until it forms soft peaks. Then fold into the chocolate mixture.
Divide the cherries between 4 glasses and top with the white chocolate mousse.
Leave to set in the refrigerator for at least 2 hours.