Confectionery from Majorca: Delicious treats all year round

Majorcan cuisine has a wide range of choices for the most discerning palate. For food lovers, there are not just the starters and main courses on the Majorcan menu, there are also the desserts, sweets and pastries. It used to be the case that there were treats for specific seasons; now they can be found whether it's summer or winter, and individual villages have their own specialities.

The various types of pastries require careful preparation, but the effort is most definitely worth it. Majorcan almonds are used often, as are lemon peel and orange juice.

Ice-cream obviously comes into its own in summer, but it has its role at other times of the year, while the winter is what established the long tradition of Majorcan almond ice-cream.

From the sixteenth century, ice was brought to Palma from the Tramuntana Mountains. Snow was stored in "cases de neu", snow houses made with dry stone. The "nevaters", snow carriers, would collect the ice from the pits in these snow houses; these were efficient enough to store ice even into the summer. In the early eighteenth century, almond ice-cream was invented in Palma by mixing ice and almond milk. Once upon a time, doctors used to prescribe it. Nowadays, almond ice-cream is available at ice-cream parlours all over Majorca. 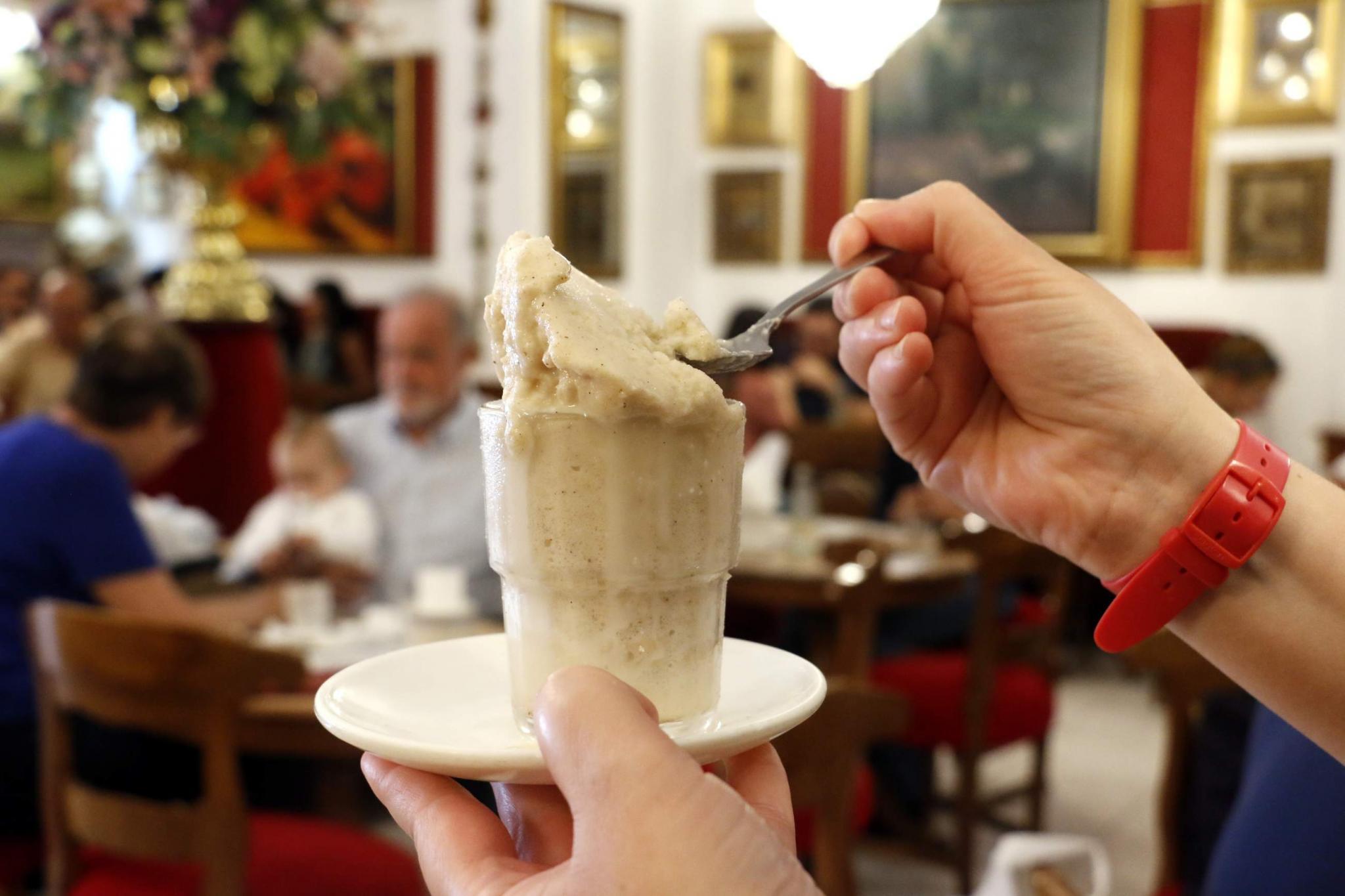 Local ingredients - almonds and their milk, lemons and cinnamon - combine in creating the outstanding taste of "helado de almendra" or "gelat d'ametlla". The ice-cream is popular after Easter services and it is a great accompaniment to one of Majorca's classic products.

The ensaimada is regarded as one of the island's wonders; it has geographic identification protection. For breakfast, with afternoon coffee, as a dessert, the ensaimada is highly versatile. As well as ice-cream, hot chocolate is often an accompaniment, especially in the winter, such as after Christmas Eve services. There is now an ensaimada "world championship". This takes place to coincide with Balearics Day on the first of March; a bakery in Buger was this year's champion. 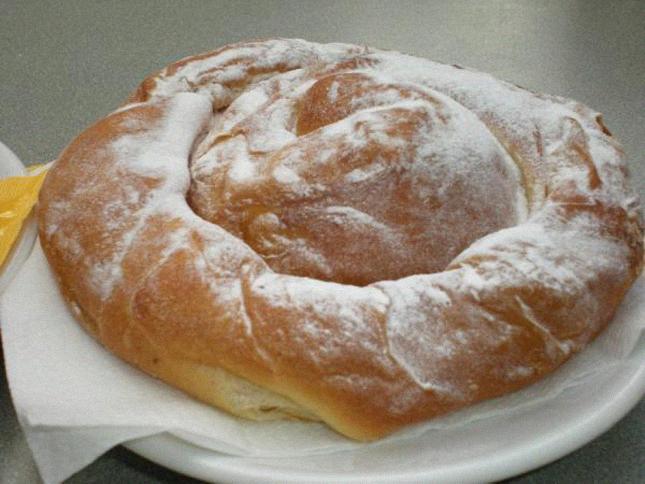 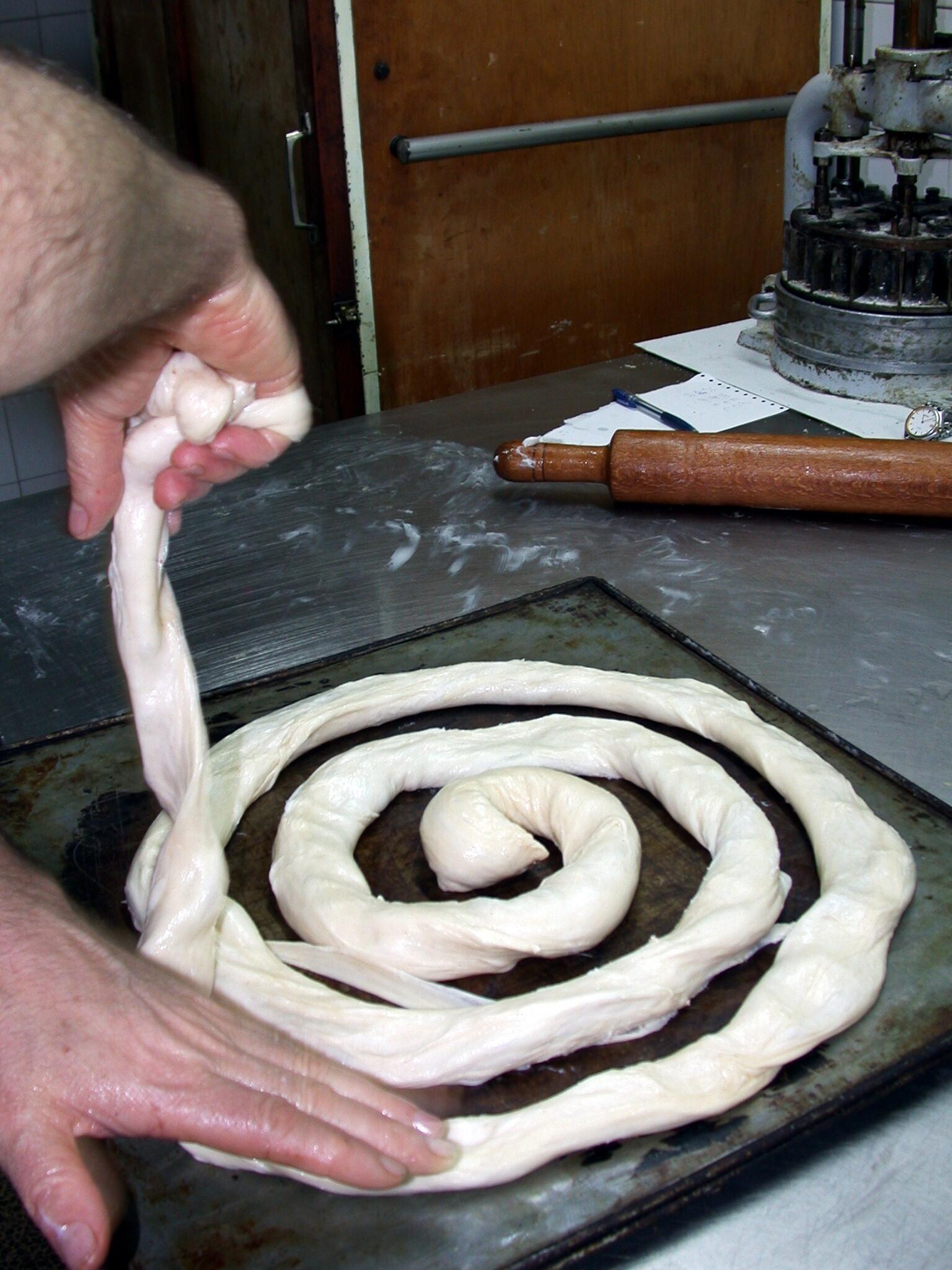 Are pastries which date back to mediaeval times. Their fillings vary; every household can seem to have a different recipe. Angel hair and vanilla cream are typical fillings, to which Moscatel fortified wine and aniseed can sometimes be added. 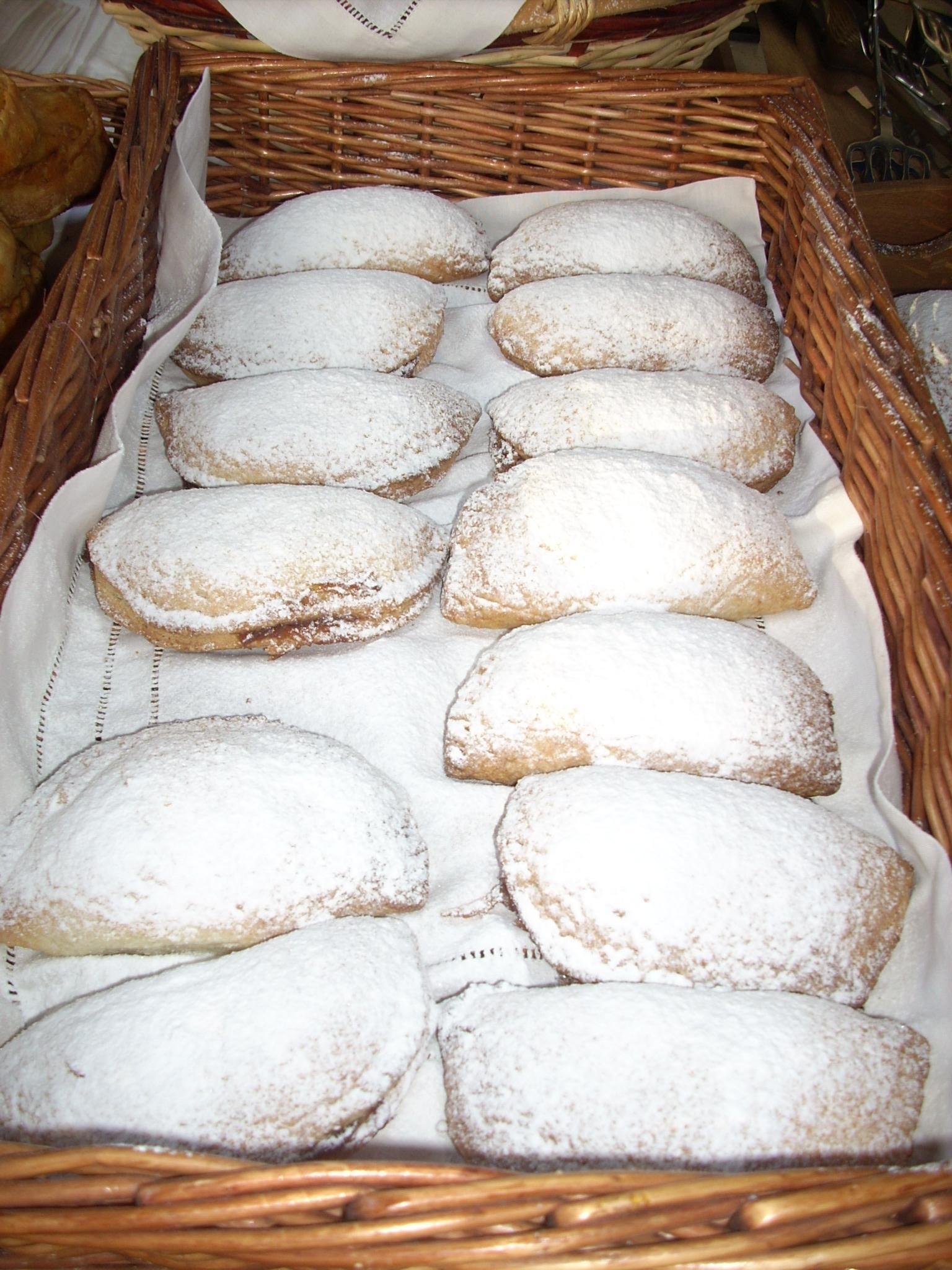 Are another treat for Easter. They can be shaped like stars or hearts; newer variations include animals and Majorca itself. These classic pastries consist of sugar, butter, egg yolk, orange juice, lemon zest, a pinch of cinnamon and of course flour. In Alcudia a special form is baked from lard, eggs, cornflour, sugar, orange juice and yeast. A circle is formed which is brushed with egg and sprinkled with cinnamon, lemon peel and sugar. Another layer of dough is placed on this bed. 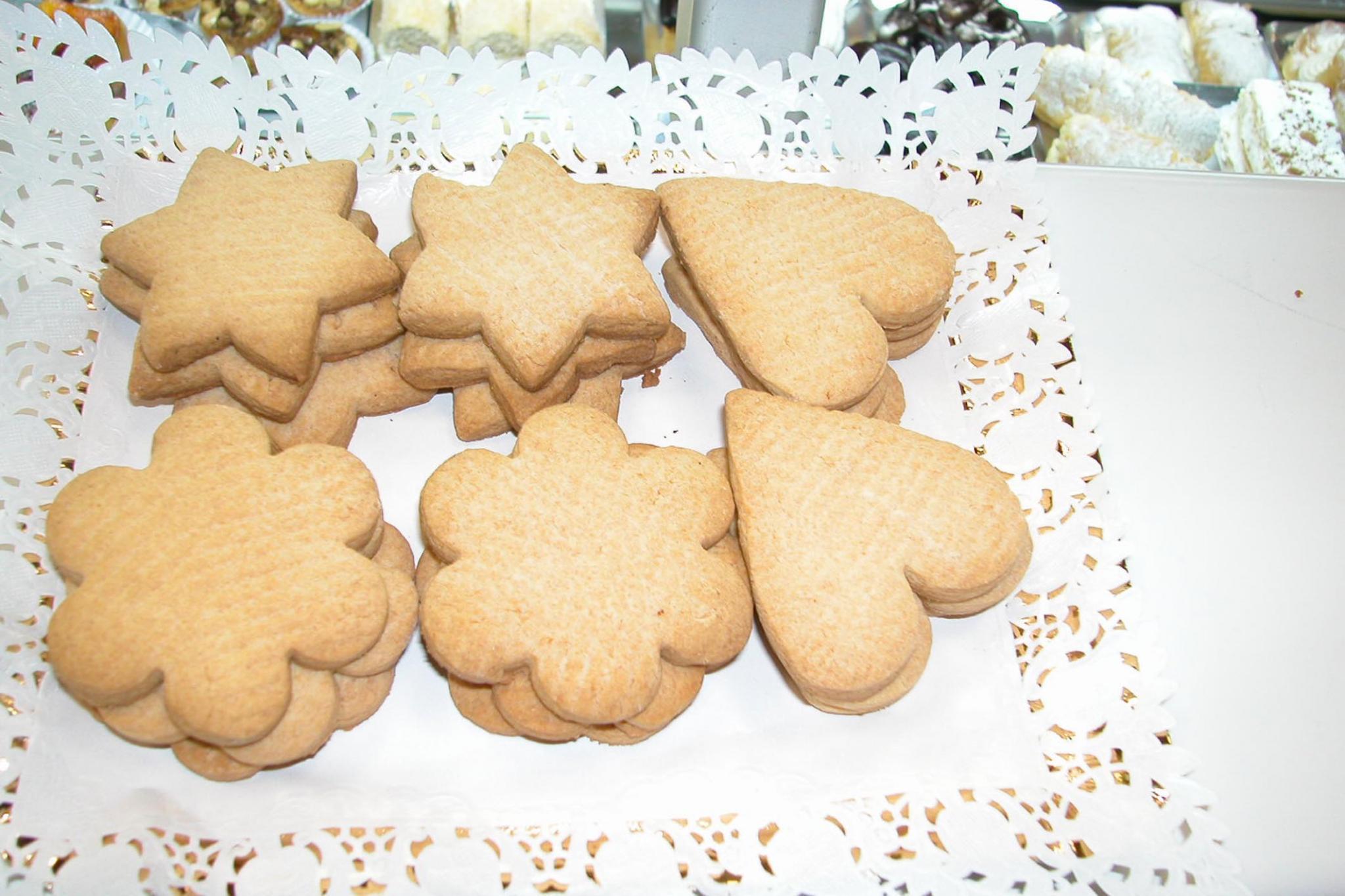 Bunyols: For the cool season

When it gets cooler, it's time for bunyols, although they can be bought all year round at weekly markets and celebrations. They are especially popular in October and at the beginning of November to coincide with the fiesta of Saint Ursula on 21 October and with Halloween and All Saints. In many districts of Palma and in the villages, stalls specialising in bunyols only appear around this time of the year. Queues can be quite long at these stalls, such is the demand. Nowadays they tend not be made at home, but where they are, families stick to proven recipes handed down over generations. 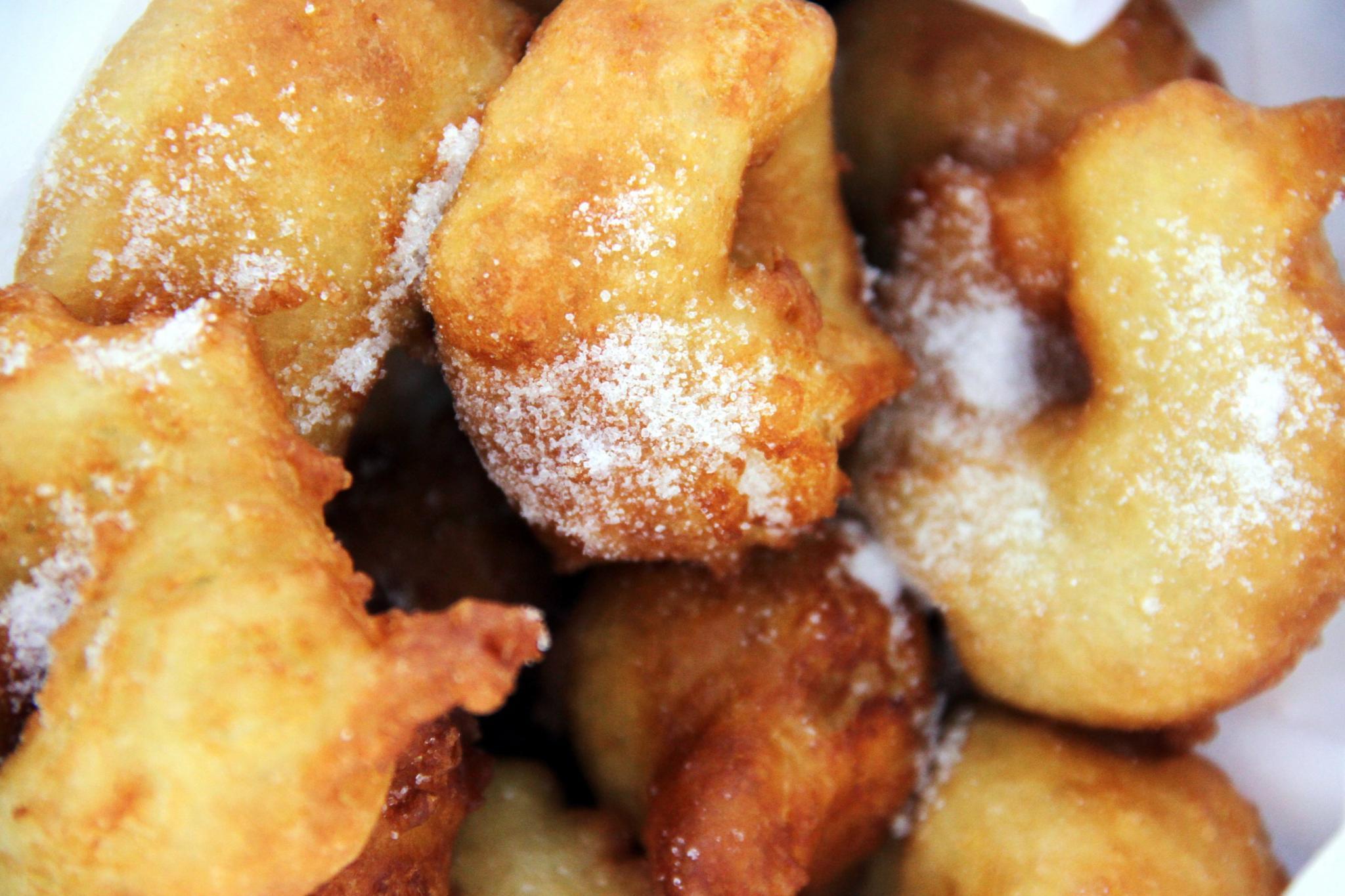 The classic bunyol comes with a hole, just like a doughnut. This is made from potato yeast dough, sizzled in fat and sprinkled with sugar. It may affect the waistline, but it is delicious, especially when the temperatures are a bit cooler. Bunyol bakers have well-practised skills, creating the hole with thumbs and index fingers.

Variations include "buñuelos de viento" ("bunyols de vent") or "profiteroles". Made from choux pastry, they are like cream puffs and are available with or without fillings. Where fillings are used, vanilla or chocolate truffle creams make them especially appetising. 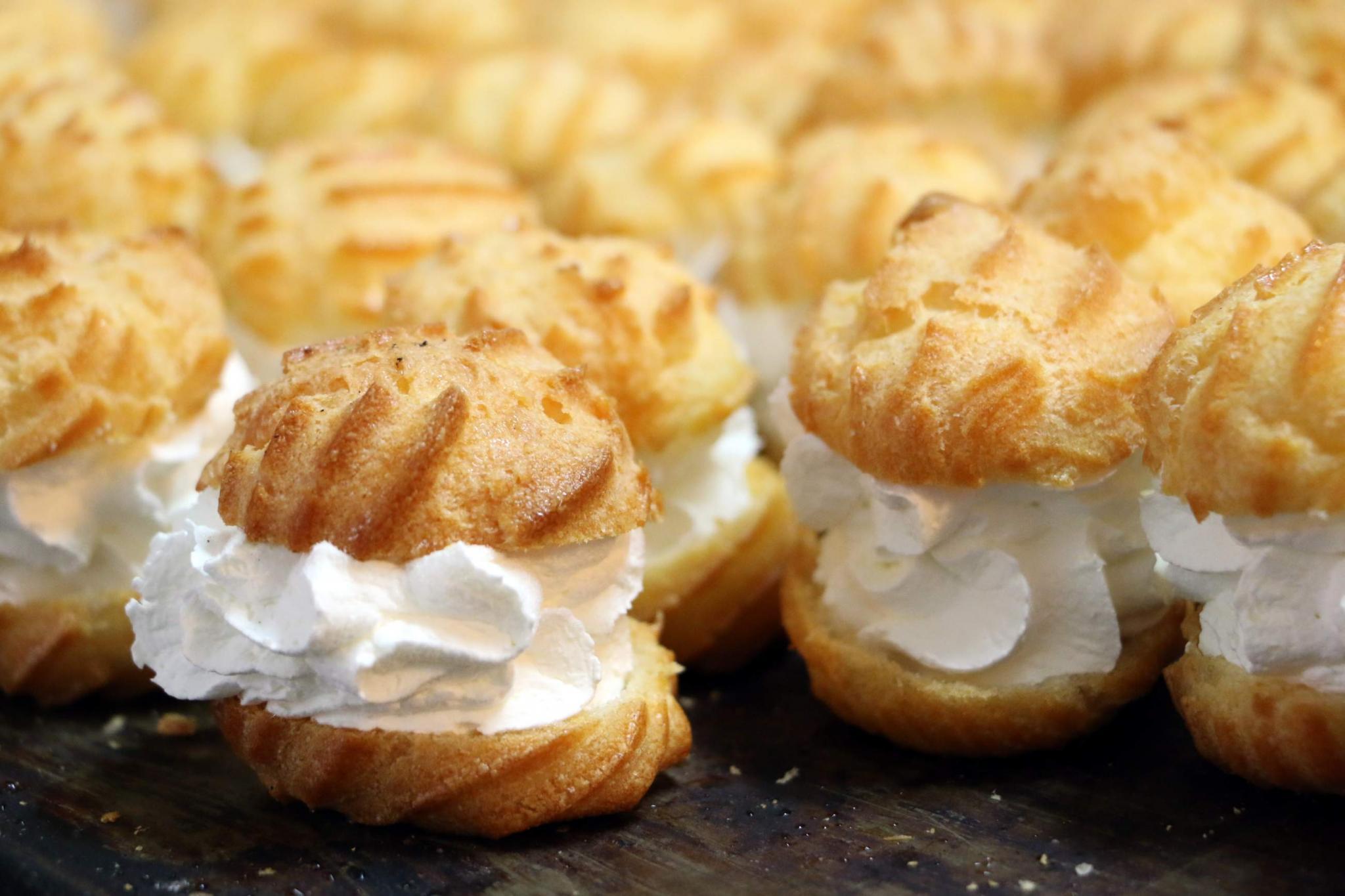 It is no surprise, therefore, that children are particular fans, especially the youngest, who look forward to bunyol time. In schools and kindergartens, there are breakfasts with freshly made bunyols, and in some instances the boys give the girls red carnations and receive bunyols in return. This stems from an old custom of serenade. Young men would sing beneath the windows of their beloveds. If the singing was successful, the young men would be invited in and given bunyols and dessert wine.

Is the name of a pre-Christmas event dedicated to the art of confectionery at convents in Majorca. It is held at the Balearics Centre for Military History and Culture, which is at the Convent of Santa Margarita. Nuns from Calvia, Manacor, Valldemossa and Palma sell their products, among which is the marzipan cake "Pez Real de Mazapán". There is almond chocolate in grandmother's style, made with egg yolks and nuts in chocolate, and there are Advent cookies and biscuits made from typical Majorcan lard dough. 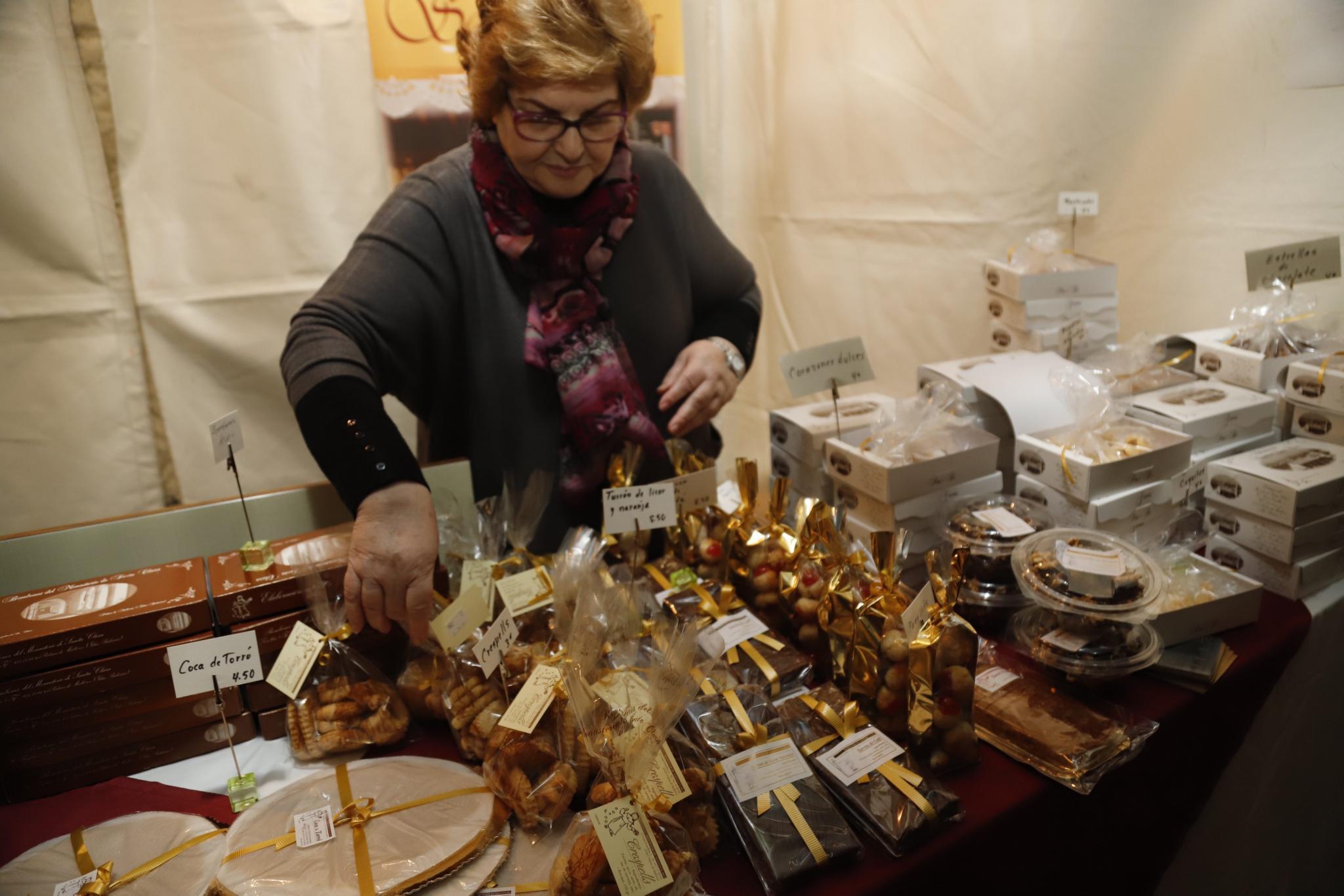 A classic of the Christmas season across the whole of Spain and most certainly in Majorca is "turrón". It is a variant of white nougat that is made from almonds, honey, sugar and egg whites. It can come with chocolate and candied fruits. Firm turrón features peeled almonds and white wafers. The softer version is a mixture of ground almonds, honey, sugar and egg white. 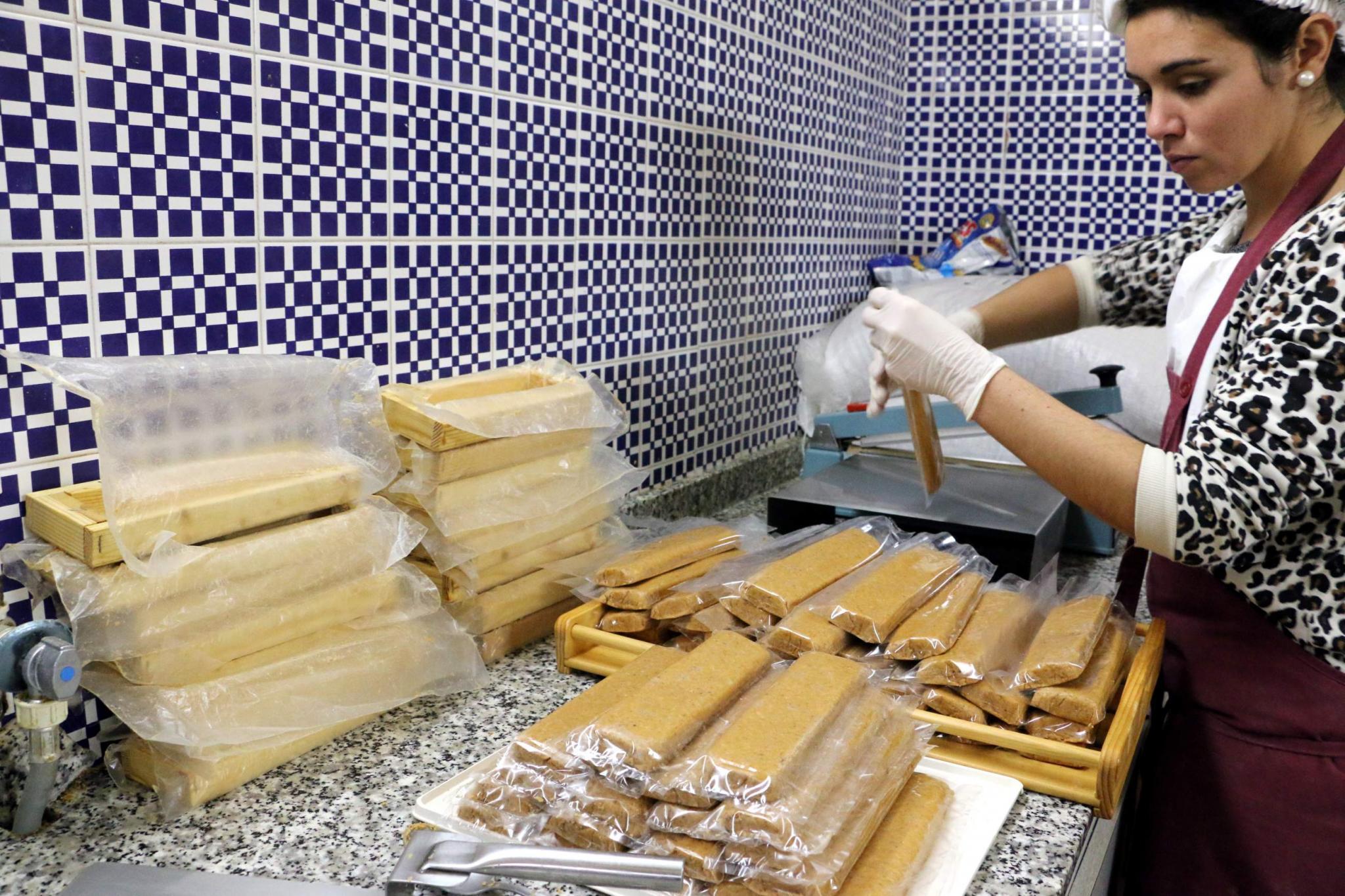 Turrón can be bought from any supermarket over the Christmas period, but it tastes better handmade by a traditional Majorcan bakery or by the nuns. 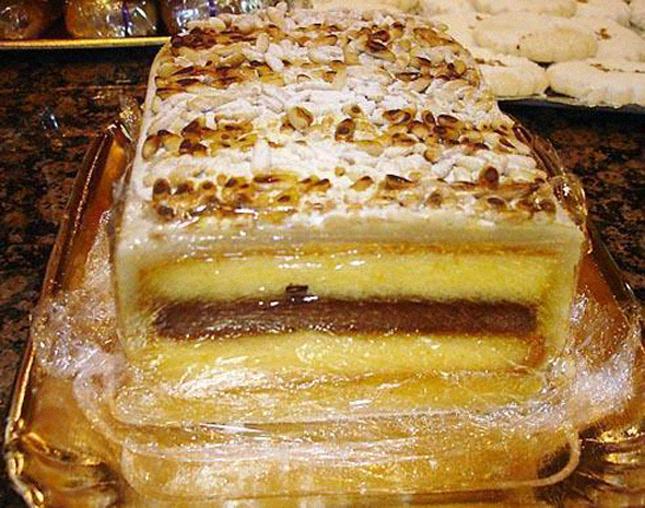 Cocas for every season of the year

Coca is a kind of pastry that is available in different varieties all over Majorca; it can be savoury and of course sweet. In Valldemossa, a typical version is "coca de patata", a form of roll made with potato dough and dusted with icing sugar. 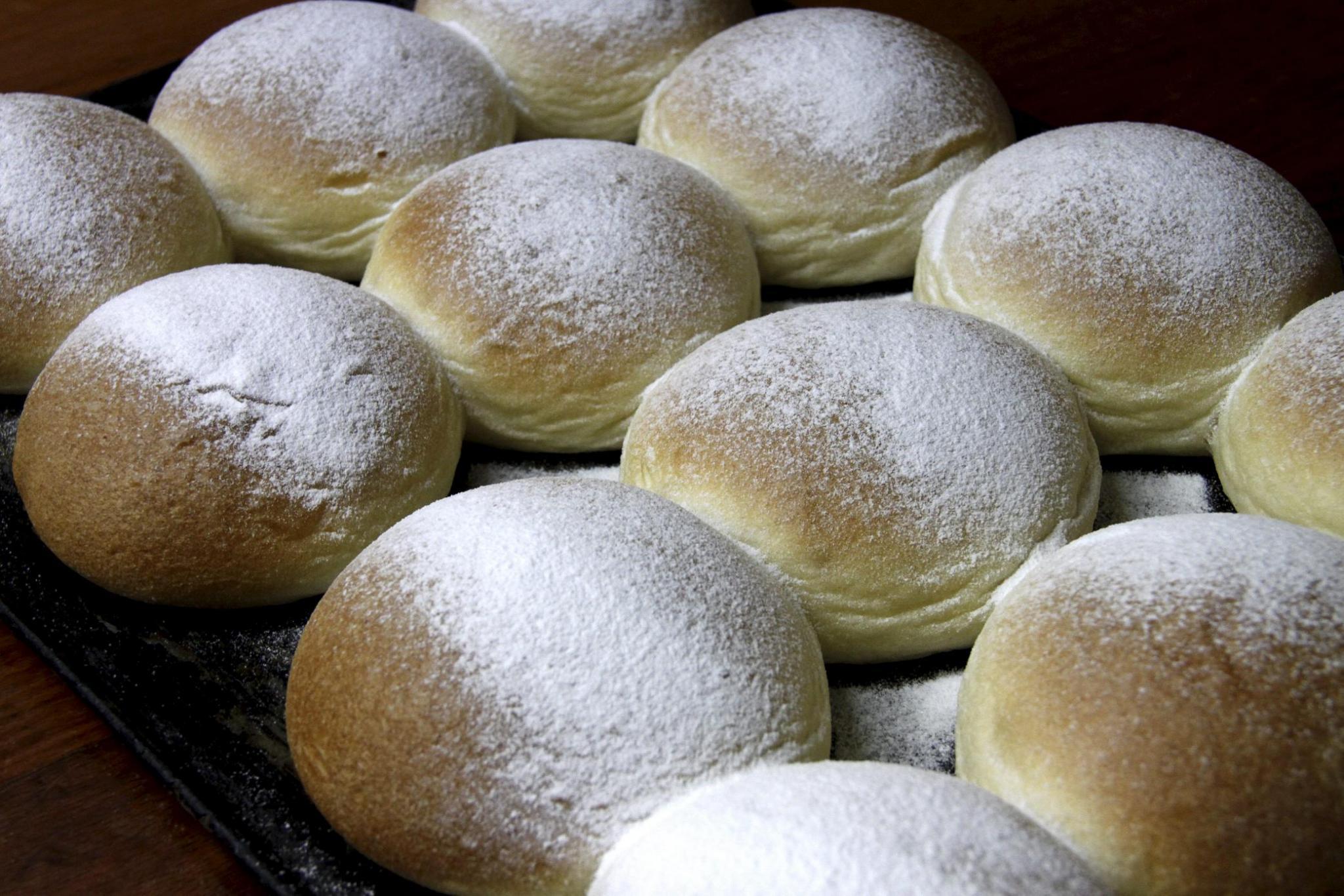 Another is "coca de Sant Joan", which is traditionally produced for Midsummer's Eve, St. John's Eve (John the Baptist), but is now also available all year round. It consists of flour, sugar, eggs, salt, yeast, lemon peel and lard. Water or milk are mixed in. The oval or rectangular cake is then rolled out and baked until it is juicy on the inside and golden brown on the outside. It is embellished with candied fruit or vanilla cream.

Then there is the Majorcan sponge cake known as "coca de cuarto" or "quartos embetumats". It consists mainly of egg, sugar and potato starch. It is filled with vanilla cream and can include a generous spread of meringue. Cuarto is available in Palma in particular.

Local delicacies: The best from the villages

Lloseta, in the centre of the island, is worth a visit for several reasons: it is a starting-point for walks into the Tramuntana, it is famed for its shoes, the restaurants are excellent, and there is also a Lloseta pastry - the Cardenales. Filled with cream, it is one of Lloseta's treasures. A walk into the mountains, for some, might be needed ... 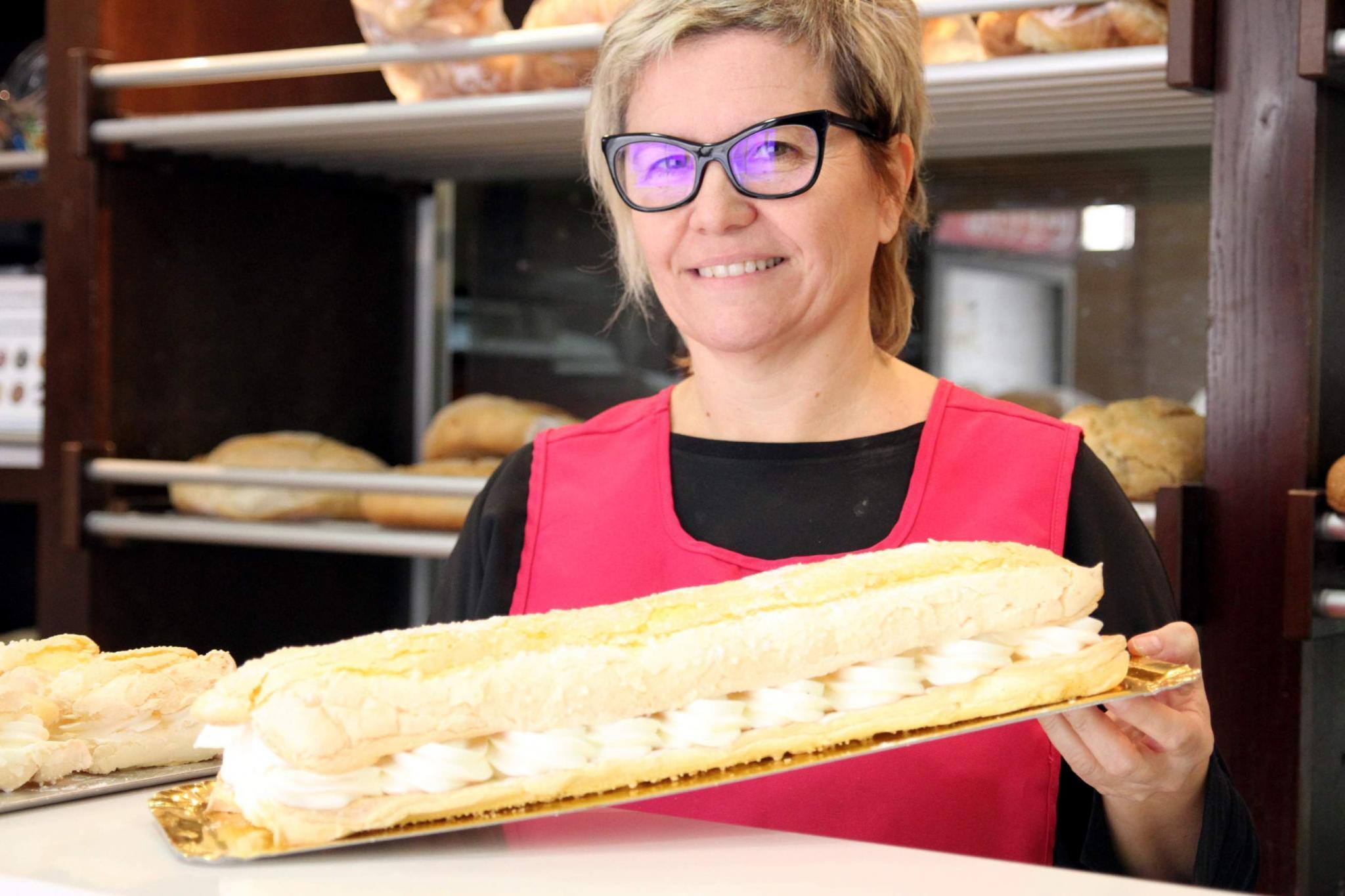 Typical Majorcan almond cake is "gató d'ametlla"; Valldemossa's bakers are particular experts. They and others know that the cake has to be 'startled'. After baking, they drop the cake onto a tabletop, which loosens air bubbles and makes the cake nice and even. The gató may look simple, but it has a very special taste of lemon, orange and, of course, almond. 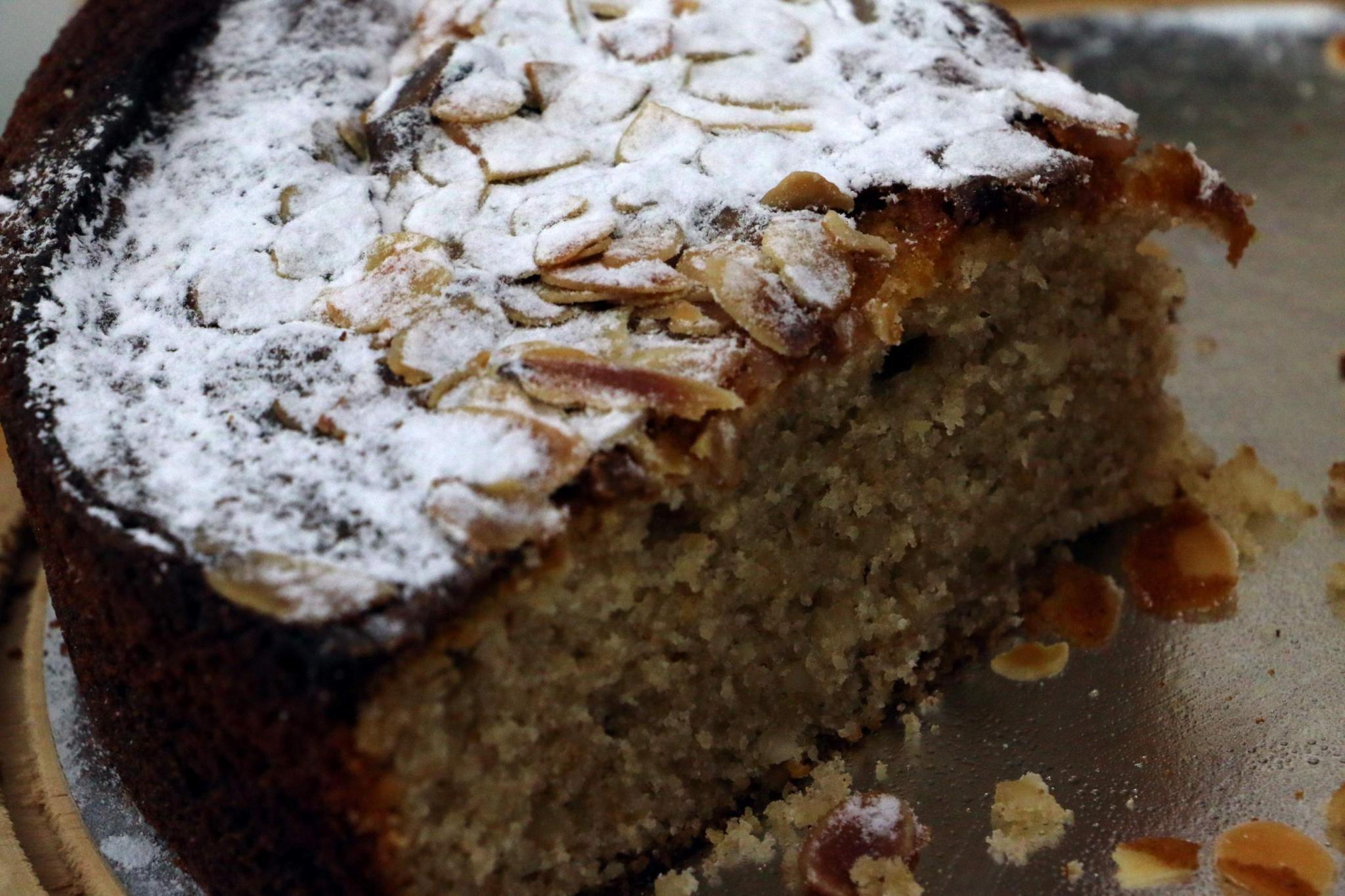 The dessert "postre de músico" is not only intended for musicians. It is made with Majorcan figs and almonds. Refined with anise, "figues seques amb anís" is created. Experience and time are needed for its making, as are dried figs and a dash of anise liquor. In the past, figs were dried in the sun, but today they are put in a special oven. A splash of salt water is an additional preservative for the fruit. Sugar and fresh almonds are added as well as, if you wish, a spot of Moscatel. 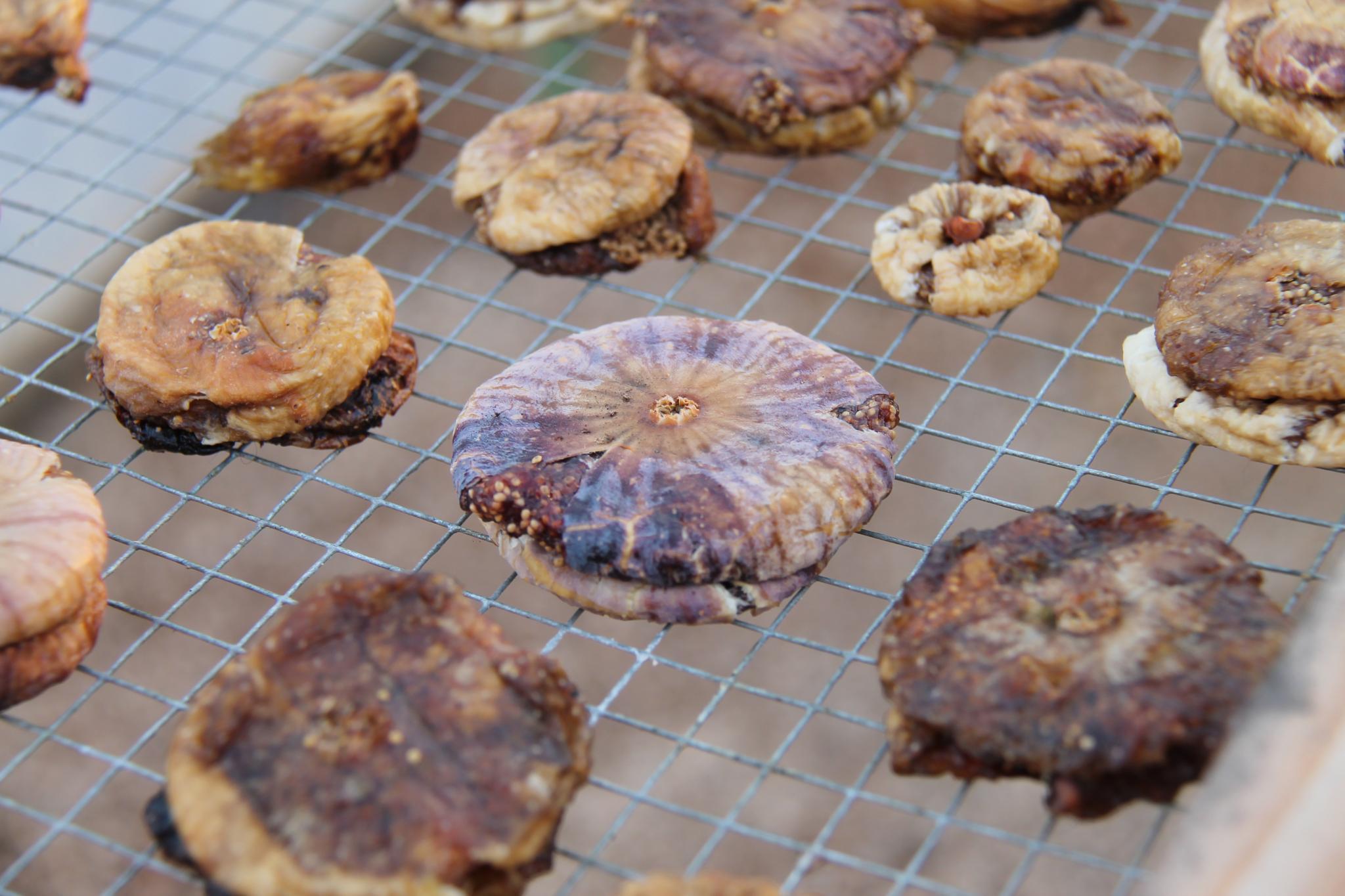 Olive oil crackers are produced in many Majorcan villages. They are crumbled and mixed with a "pudding" dough. For Majorca pudding, milk is boiled with sugar, cinnamon sticks and lemon peel. Beaten egg cream is then added. It is a popular dessert for the whole year and can be made with einsaimada or bread.

And a final mention should go to a fair at which all manner of confectionery - pastries, sweets, chocolates - can be sampled and bought. This is the Sweets Fair in Esporles at the beginning of October.

More information can be found at www.infomallorca.net.