Tomatoes And Straw: The Neo-Fiesta

The Tomatina of Buñol in Valencia. | EFE

The Tomatina of Buñol in Valencia has its origins in an incident which occurred in 1945. The village’s summer fiestas are in August, and during the fiestas 74 years ago, there was a procession of giants and bigheads. This procession included the “committee”, a body associated with fiestas which is largely responsible for organising them or specific events that take place over the days of fiestas.

So far, so unremarkable. But what happened at the time of that procession was to give birth to what is the most celebrated of fiesta fights - the Tomatina. There were a number of village youths in the square as the procession and the committee filed past. These youths fancied taking part in the procession. This was not permitted. They were not members of the committee. The youths didn’t take kindly to this, nor did the committee, whose procession was being invaded by interlopers. A fight broke out, and during the course of it some vegetables were thrown.

The following year, much the same thing happened, except this time there was greater preparation. Tomatoes were hurled at the committee from balconies. The local police became involved, as did other authorities, and the throwing of tomatoes - or indeed anything else - was prohibited. The ban wasn’t terribly successful, and so eventually - 1959 - the authorities relented. Certain rules were drawn up, and the Tomatina was officially born. Sixty years on to the month, and the alternative fiesta of a small village in Valencia is the template for what will happen this coming Sunday in Majorca. Or is it?

The origin of fiesta fights in Majorca is somewhat disputed, but Binissalem can probably lay claim to it. The grape battle takes place each September during the fiestas for the grape harvest - the Vermar. Vilafranca might put forward the case for its melon fight. Both have their elements of ritual in addition to the hurling of fruit, but neither are perhaps as ritualistic as what has emerged in several other villages. 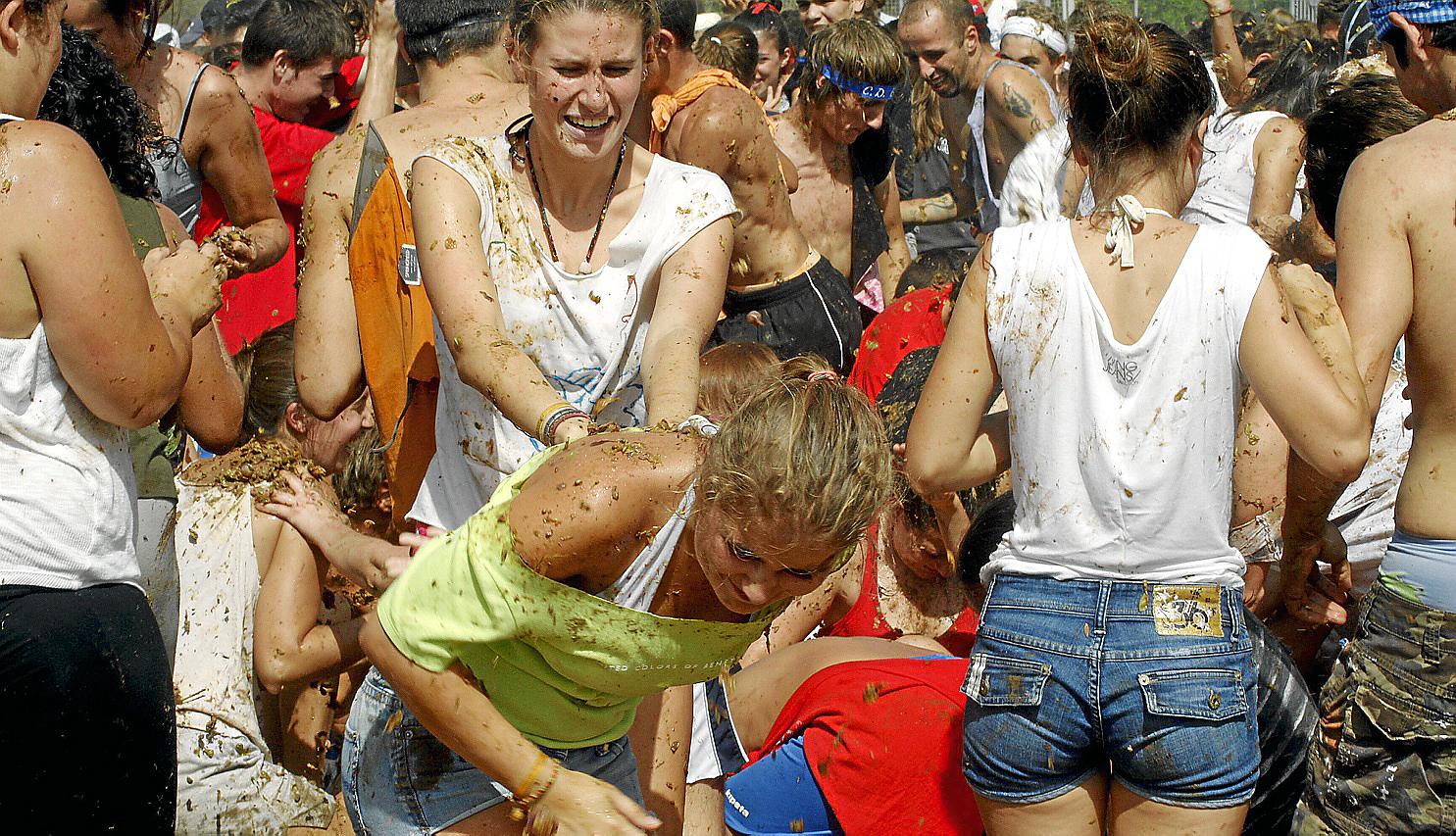 The Tomatina would seem to be the model, but a Majorcan take on these alternative fiestas, referred to as “neo-fiestas”, has been promoted by a writer named Marcel Pich. He has written a book about them and has examined the cultural, societal and political motives for their development; the Tomatina, as such, doesn’t appear to be a significant factor.
Fruit and veg are not obligatory, and this is the case with Sunday’s fight. In 2006, the young people of Sencelles decided that they wanted to have an alternative to the normal schedule of fiesta events. They came up with the Embala’t. Two teams, male and female, head off to the fields. There is a race to return with bales of straw. Once in the assigned square, there is a fight - straw and a whole load of water. There isn’t really a winner; it’s just an excuse for fun and for creating a mess. 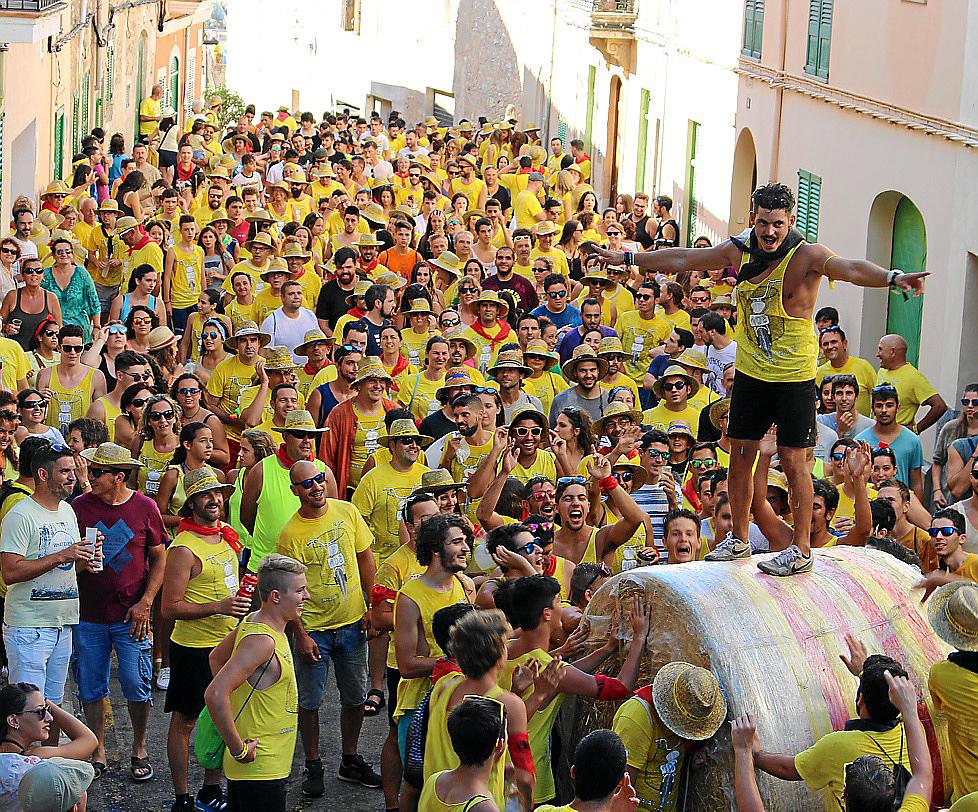 Pich’s arguments about how these neo-fiestas came about do contain echoes of the Tomatina. The most obvious one is that young people felt excluded from fiesta organisation and from the staging of celebrations. There was a fiestas’ vacuum that needed filling. But Pich goes much further in considering the association with traditions. The day after the Sencelles Embala’t, the Mucada of Sineu explores these traditions more than other neo-fiestas. Its justification is a folk tale about the bull-like figure of the Muc, and it has become the most lavish of the neo-fiestas, a grand all-day event that attracts people from across the island. 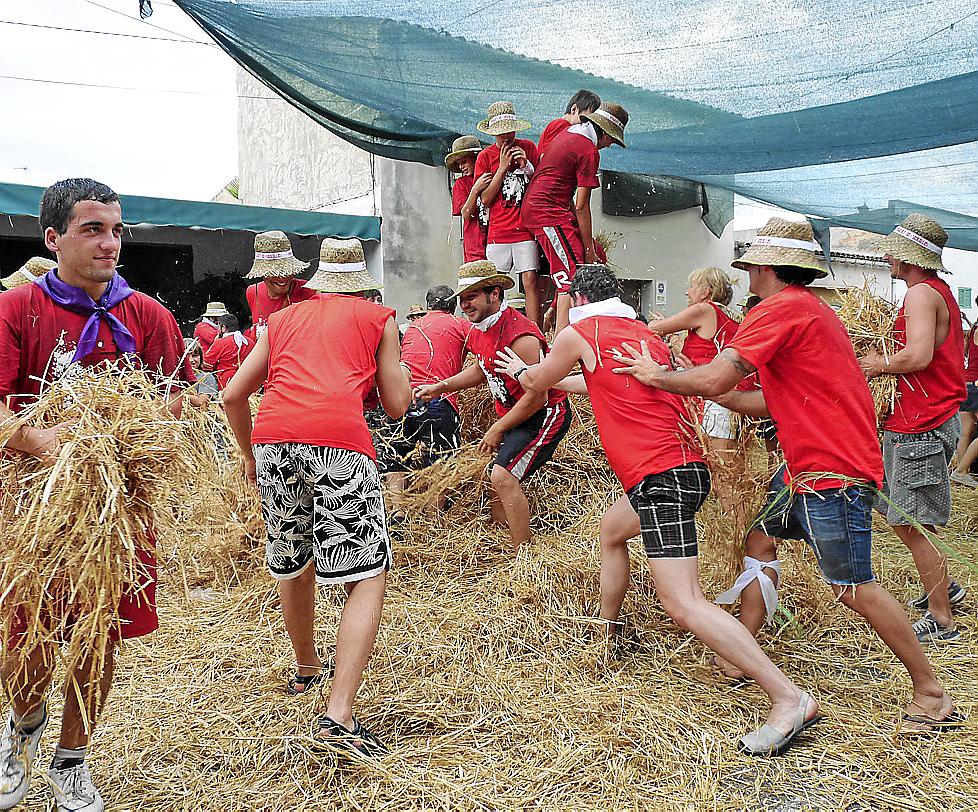 For Pich, the roots lie with ruralism and its associated traditions. The neo-fiestas are a statement about the island’s rural heritage, a reclaiming of something that was broken down by tourism. They can also have their targets - the principal institutions of Spain, such as the monarchy and the church. There is a Catalanist character, and in one instance - that of Son Macia in Manacor - it is about declaring the village an independent republic. This political element, Pich believes, was strengthened during the period of the Partido Popular regional government from 2011 to 2015. Catalan symbols appeared in defiance of legislation which sought to ban them. Other political statements include the denunciation of Francoism during the Clovelles of Petra, a fight with almond shells and water.

The neo-fiestas have developed their rituals, some of which appear to parody traditions of fiesta organisation. And one of these is the committee. The Embala’t, for example, has its committee (they call it a commission in fact), and it was the committee - whether admitted in Majorca or not - which was at the centre of the neo-fiesta fight. In Buñol, there had been a fight, a proper one, before the tomatoes became an institution.