Butterflies are extraordinary little things, not just because of their shapes and vibrant colours, but some in particular make some incredible journeys to get here, and when you consider they are such delicate things, it makes them even more remarkable and impressive. Majorca has a good range of butterflies to see with my favourites being the Swallowtail and Clouded Yellows.

So what is a Butterfly?
Butterflies are insects from the order Lepidoptera, which also includes moths. Adult butterflies have large, often brightly coloured wings, and a conspicuous, fluttering flight action. There are butterfly fossils that date to the Palaeocene, which was around 56 million years ago. Butterflies have the typical four-stage insect life cycle. Winged adults lay eggs on the food plant on which their larvae, (known as caterpillars), will feed. These caterpillars grow quite rapidly, and when fully developed, pupate in a chrysalis. When metamorphosis is complete, the pupal skin splits and the adult insect climbs out, and after its wings have expanded and dried, it flies off. Most species tend to have a single generation.
Many species make use of camouflage and mimicry to evade predators. Some, like the Painted Lady migrate over long distances. Many butterflies are attacked by parasites including Wasps, Flies, and other invertebrates. Some species are pests because in their larval stages they can damage domestic crops or trees; other species are pollinators of certain plants. Larvae of a few butterflies eat harmful insects, and a few are predators of Ants. 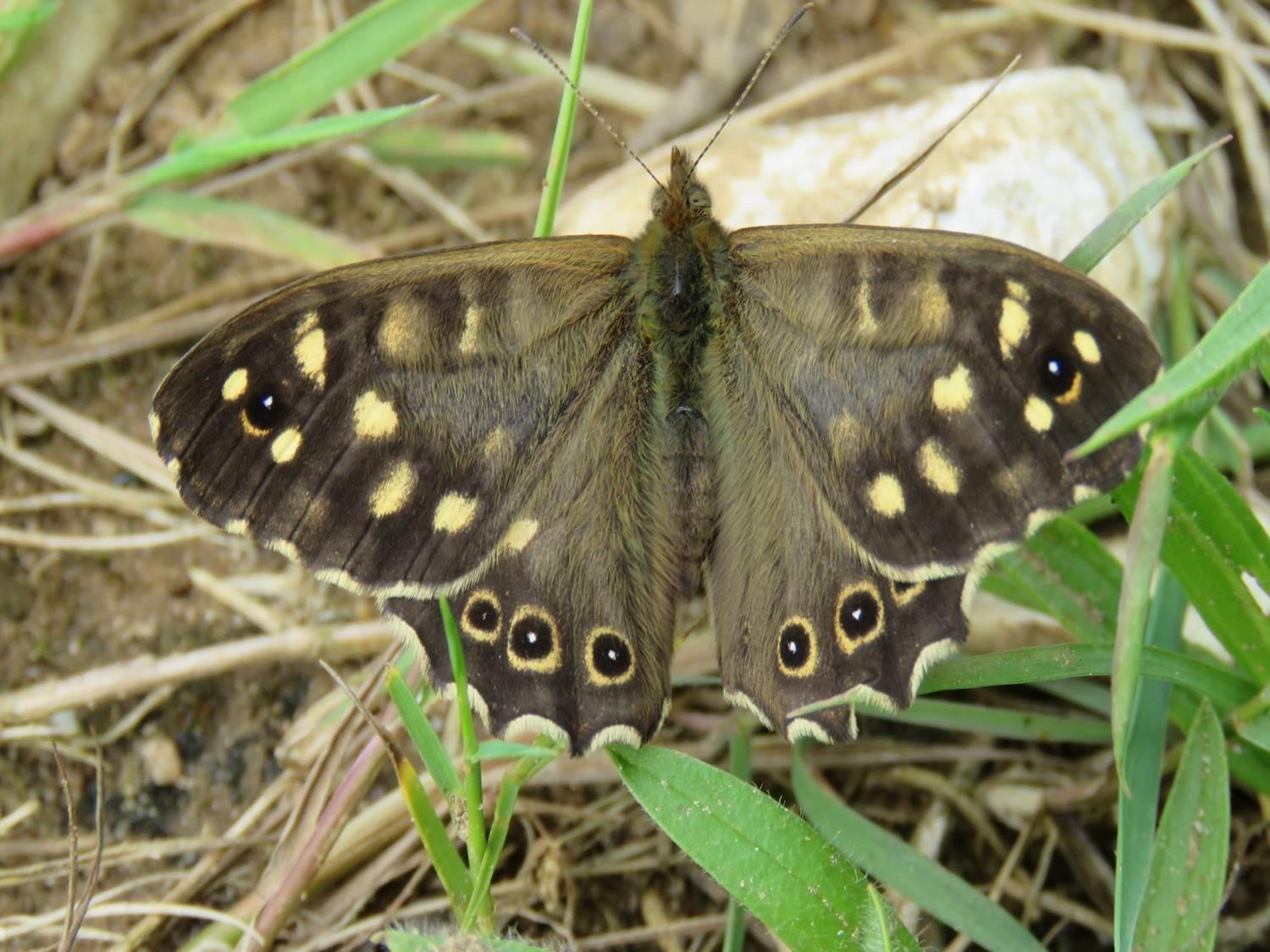 Painted Ladies arrive in May and June where they have migrated from south-west Europe and North Africa - a distance of more than 600 miles (1,000km). Now that in anyone’s book is an impressive feat of flying. Some years they can be scarce and yet in other years they can be seen in vast numbers. Take 1948 for example where over 30,000 were recorded in the UK. Other notable years have included 1952, 1966 and 1969. They are however a powerful flyer and reach speeds of around 8 or 10 mph.

In July and August, these little brown beauties will be a familiar sight amongst the meadows and open fields of Majorca. They favour long grass with plenty of wild flowers – and Majorca has no shortage of these habitats, thankfully. Favoured plants include Mayweed, Fleabane and Thistles. They use tall grasses as vantage points from which they can fly out to conduct sorties against other insects that trespass on their territory. Small Skippers are very alert butterflies, which only live for around twenty days, so understandably with such a short life cycle, there will be plenty to do. When they are resting, they sometimes hold their hind-wings slightly backwards – as can be seen in my picture. 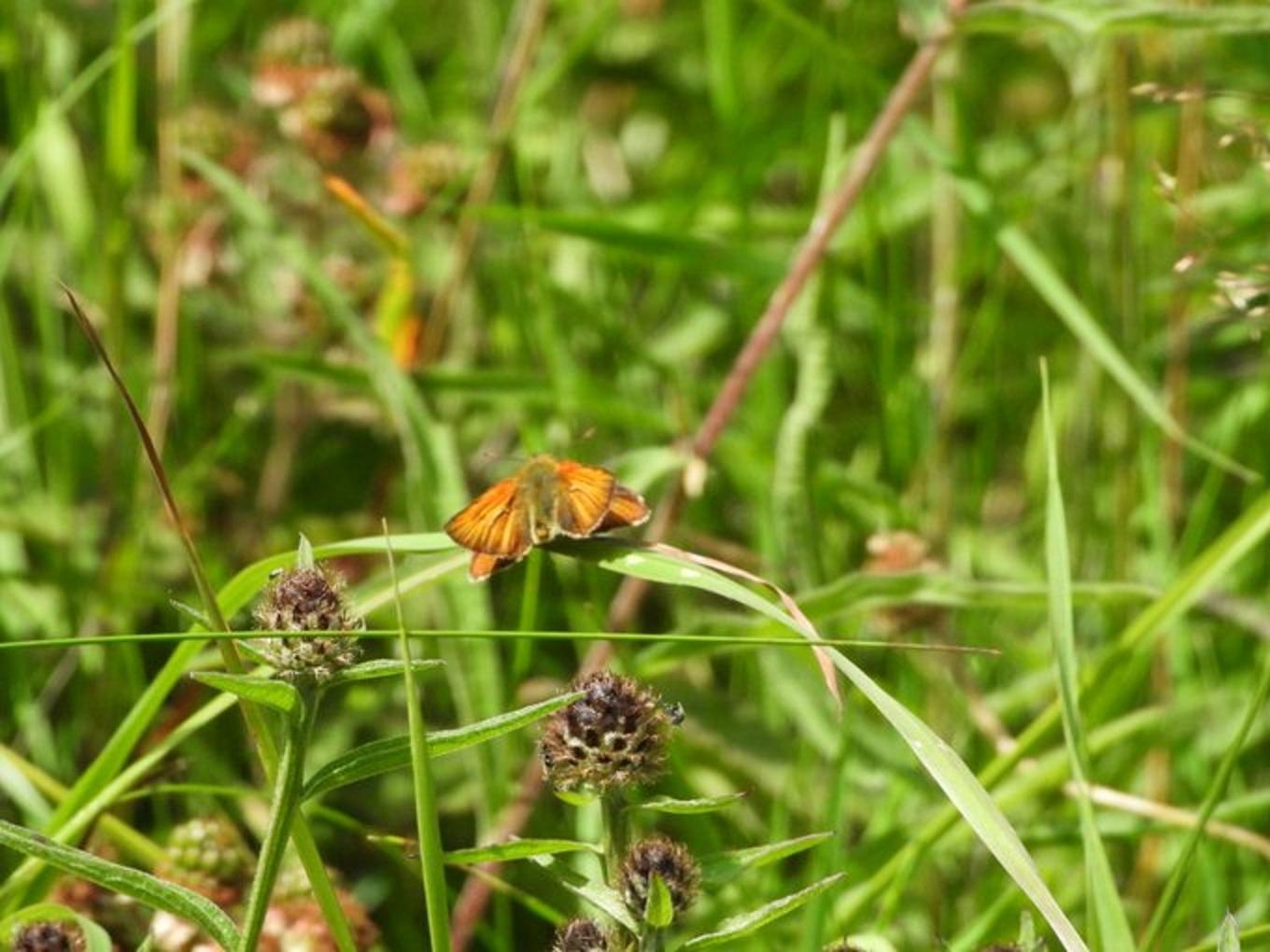 I do like this little butterfly, not because of any bright colours because it certainly lacks those, but for when it is resting, and the under wing in particular shows off a line of rings - hence its name. These false eyes or spots - three on each fore-wing and five on each hind-wing, confuse birds as to the position of the butterfly’s vulnerable body. They can vary in both size and colour too. Found from late June to August in wet grassy places, the corners of fields, ditches and woodland glades, they have a life span of just two weeks. Although they fly on warm days, they will also fly on dull days and even in the rain. Time is certainly of the essence.

The caterpillars, which live for about eleven months, usually feed on grasses during the night. If disturbed, they will drop onto the ground and lay very still. Now here is a fascinating fact - the females lay their eggs in flight, which they drop onto the grasses which the young will then eat in the autumn. Nature never ceases to amaze me. It is also impressive to see species of Tortrix Caterpillars hanging on a silk thread in mid-air from the canopy of the Oaks. This is a clever defensive measure that ensures that the small birds such as the Great, Blue and Coal Tits can’t usually hover to pick them off – probably just as well when you consider a single Blue Tit alone when feeding a hungry brood can catch up to 3,000 caterpillars a day. Nature certainly has to adapt. 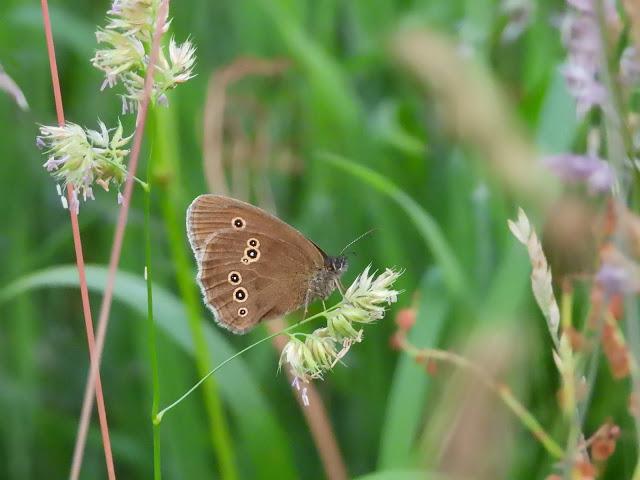 Probably one of the most easily recognised butterflies - their large size and bright colours make it unmistakable. These bright colours earned them their 18th century name of ‘admirable, from which the modern name evolved. It is fast flying, patrolling its territory constantly, and seems to prefer flowers which are either purple or blue. They often rest and ‘sun’ themselves, and unusual for a butterfly – they sometimes fly at night. They have a wingspan of two and a half inches, quite a size for a butterfly. I enjoy seeing any butterfly species, but with this one in particular, I never tire of watching them.

Rotting fruit on the orchard floors doesn’t go unnoticed, and Red Admirals will happily take advantage of this rich food source, sharing the fruits with Wasps and other insects. When feeding, they constantly open and close their wings. After spending seventeen days transforming from a caterpillar to a butterfly, a Red Admiral will emerge from its chrysalis. The pathway leading down to the Bishops 1 and 2 hides in the Albufera Marsh can sometimes be alive with this species. Its spots and connections with woods gave it another name in the 18th century of ‘Wood Argus’ after the many-eyed hero of Greek mythology. They establish their territories in sunny glades which they defend vigorously. There are two to four generations a year, with autumn caterpillars living through the winter and feeding during warm spells, and can take eight to nine months to become fully grown. The majority of birds will not contemplate eating a butterfly, not just because many have adopted a defence mechanism of ‘false eyes’ on their wings, but because they have fine hairs and are general distasteful. The Cuckoo is one such bird which can tolerate them as their stomach is lined to specifically deal with a multitude of insects. Another species which can certainly handle eating butterflies is the summer breeding Spotted Flycatcher on Majorca – my chosen bird of the week. 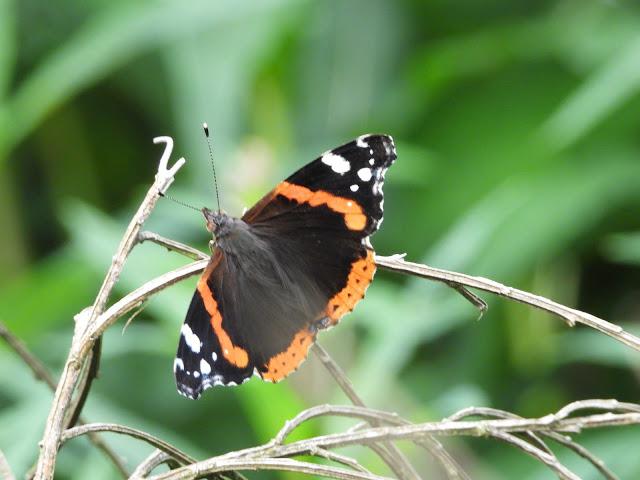 Brid of the week in Majorca: Spotted Flycatcher

l This tiny flycatcher is a welcome sight each year on Majorca, where little groups can sometimes be seen feeding together when they first arrive. It is a familiar sight to see them darting out from a branch or from a fence post, to catch an airborne insect and then quickly return to its perch. 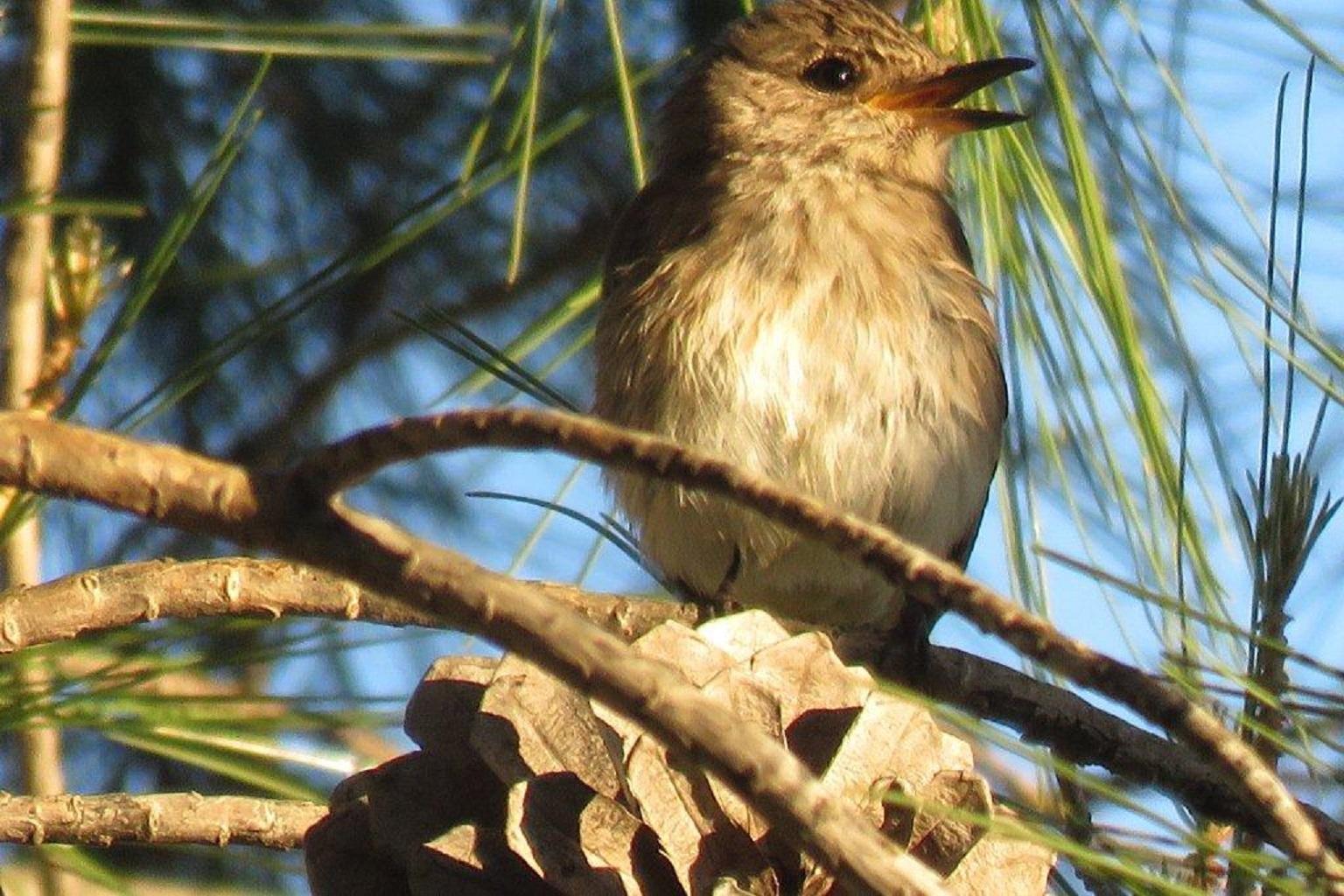 The call is a ‘tzee zuk zuk’ which is quite short and almost squeaky. They are a mere 14.5cm in length with a wingspan of 23 – 25.5cm and a weight of 14 – 18g. Woodland edges, parks, glades, Pine forests, Oak woodlands and groves and orchards all form their habitat and they can sometimes be seen at higher altitudes (I have seen them around Alburcutx Tower for example.) The nest is in a tree-fork, crevice or creeper, with plant material and twigs forming the nest lined with fine hairs and feathers. 4-5 very pale blue eggs are laid, with blotches and mottles of purple and reddish. Flying insects form the bulk of their food, especially Flies and even Bees, with Butterflies also being taken at times.

This is the only flycatcher species with streaked underparts. The upper parts, wings and tail are entirely grey-brown and will appear unmarked form long range. Both sexes are similar, and the forehead and crown are streaked black and outlined in white. The underparts are white, washed with brown on the sides of the flanks and breast. At close range, the throat, the side of the breast and even the flanks will show dull-brown streaks. Even the bill is a dull grey-brown with the legs either brown or black.

Members of the first brood are unusually known to help feed the second brood which gives both broods a good chance of being to migrate in the early autumn. It is indeed a drab looking little bird, but it is nonetheless an excellent hunter of insects. It certainly has a lot of charisma and its feeding actions make it quite recognisable. Despite its lack of colours, it is certainly worthy of being ‘bird of the week’. Look out butterflies.