The return of the fig

One of my favourite Mediterranean summer treats are delicious, fresh figs. Sweet, fragrant and juicy…they are one of life’s finest fruity pleasures. Ideally they are consumed sun-warmed straight from the tree and I must confess that occasionally, while I’m driving around the island and see a beautiful tree fat with ripe figs, I just have to pull over and devour a couple before happily continuing on my journey.

Apparently, Majorca was one of the largest fig producers worldwide some years ago and near the village of Llucmajor, you’ll find Son Mut Nou, an experimental farm of 15 hectares specializing in the cultivation and study of figs and fig trees. Thousands of fig tress grace Son Mut Nou finca and there are over 600 varieties hailing from all corners of the Balearic Islands, the main land, and other far away, exotic lands such as China, Syria, Cyprus, Greece, Egypt, Italy, Australia, South Africa, Israel and Japan, including one from Fukushima!

“Higos frescos”, as they are known in Spain, are one of the oldest known fruits known to man. There was a fig tree in the Garden of Eden, and it is the most mentioned fruit in the Bible. They are high in energy and early Olympic athletes were given figs as a training food. They were also given as laurels to the winners of the first Olympics as a “medal”. There are many amazing varieties, but figs are generally classified by colour: green, gold, black and purple. They can be simply roasted with honey and work well with salty feta cheese, orange, port, ginger, strawberries, almonds and chocolate. Good quality, thinly sliced Serrano ham with crusty bread and fresh figs makes a fabulous snack or light lunch. They are perfect partners for foie gras, duck, smoked meats; pâtés and they can also brighten things up no end when thrown into a salad with blue cheese and walnuts.

When buying figs, it’s worth noting that they do not ripen after picking, so choose the ripest fruits you can. Look for figs with rich colouring, and those that are plump and yield slightly to pressure. Smell is important too; avoid any figs that have begun to smell slightly sour. Fresh figs have an extremely short shelf life. Thin-skinned and easily bruised, they need careful handling and should be wrapped in tissue for travel. Ripe figs are highly perishable and will not keep for longer than three days in the fridge. Bring out their delicate scent and flavour by leaving them in the sun for an hour or so before serving.

This recipe is from my new cookery book; Modern Mediterranean-sun drenched recipes from Mallorca & beyond.

To make the glaze: Lightly toast the fennel seeds in a pan. Add the rosemary, maple syrup and water and bring the boil. Reduce to a light syrup and remove from the heat.

Heat a heavy bottomed frying pan and season the duck breasts. Place them skin side down and fry gently until crisp and golden. Turn over the duck breasts and place them on a baking tray. Using a pastry brush, coat the duck skin with the glaze and roast them in a hot oven (200ºc/gas6) for about 4-6 minutes until just cooked and pink in the middle. Remove from the oven and rest in a warm place for 2-3 minutes.

Heat the olive in a heavy bottomed saucepan and add the onions and garlic. Sweat over a gentle heat until they start to soften. Add the paprika, cayenne pepper, cumin and rosemary and cook for a further minute. 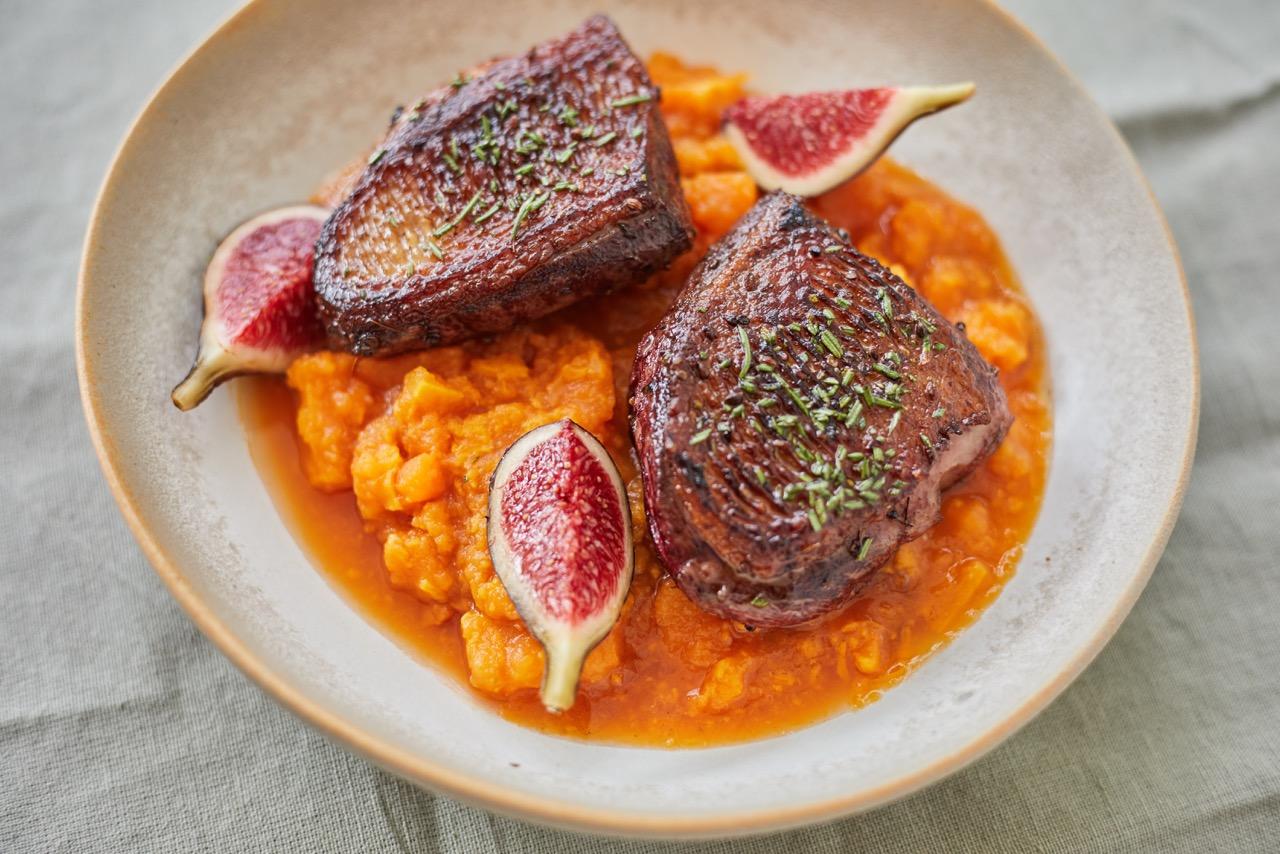 Add the diced sweet potatoes, chopped tomatoes and sherry vinegar and cook over a gentle flame, stirring occasionally, for 25 minutes until the potatoes are cooked. Season with salt & pepper and serve with the glazed duck and fresh figs.

Preheat the oven to 180C/350F/Gas 4.
Place the figs on a baking tray. Using a sharp knife, carefully make an incision halfway down the figs in the top in the shape of a cross, so the top of the fig opens up when squeezed lightly.

Crumble the cheese into the exposed centre of the figs and bake them in the oven for 3-4 minutes, or until the cheese starts to melt. In a bowl, mix together the rocket and tomato with the lemon juice and season with salt and freshly ground black pepper. To serve, arrange the rocket and tomato salad on a serving plate and place the baked fig on top.

Spices have a great affinity with fresh figs and this is such a delicious, simple dessert that can be prepared in just minutes. You can substitute the vanilla mascarpone for ice cream to make even simpler.

Heat oven to 200C/180C fan/gas 6.
Place the figs in an ovenproof roasting dish, dot over the butter and drizzle with honey. Sprinkle over the sugar and ground cinnamon, then pour over the orange juice and mix lightly. Add the star anise and fennel seeds and roast the figs for 15-20 minutes.

Meanwhile, scrape the vanilla seeds from the pods and mix them with the mascarpone & icing sugar.

To serve, place 4 fig halves, drizzled with syrup and spices on a plate and add a spoonful of vanilla mascarpone. Serve immediately.

I agree that Mallorcan figs are wonderful nut they are also very expensive. I do wish that people wouldn´t ravage wild fig trees before the fruits are ripe, then discard the fruit on footpaths.