Here's a great British sports car which made it to the finish, Jaguar XK Coupé. | Helen Pitt

The Classic Car Club runs monthly events throughout the year. In the heat of the summer, from June to September, the focus is on car shows, BBQs and picnics in the evenings, involving an easy and cool evening drive, rather than challenging driving events. These tend to be hot work even in temperate weather such as the recent rally at the end of September. Hot work not just because of the temperature outside the car, but inside too, when discussions between navigator and driver can become a touch heated.

Such was the challenge posed by Lou Sutton and Nick Cutler who very ably organised The Scramble Rally, their first event for the Club since becoming members a year ago. On the last Sunday in September, 27 cars carrying 51 people, you can work that out for yourself, started from the car park at Es Cruce Restaurant near Manacor. The route was attractive and pretty tricky to follow with questions along the way and Scrabble tiles to find at set spots.

Almost from the start, navigating around Felanitx was a challenge, but it was nothing in comparison to Manacor. Most people struggled to find the route here and were thankful to be out of the other side and on their way. Cars were seen going backwards and forwards around the same area trying to find Cami de Bendris. We passed several cars at least four times going in different directions. If you live there you can laugh because you’ll think it was simple, but to us it wasn’t. This is where the attrition started, our club president Pam and Stan her navigator, in their Cobra, left Manacor on the wrong road. 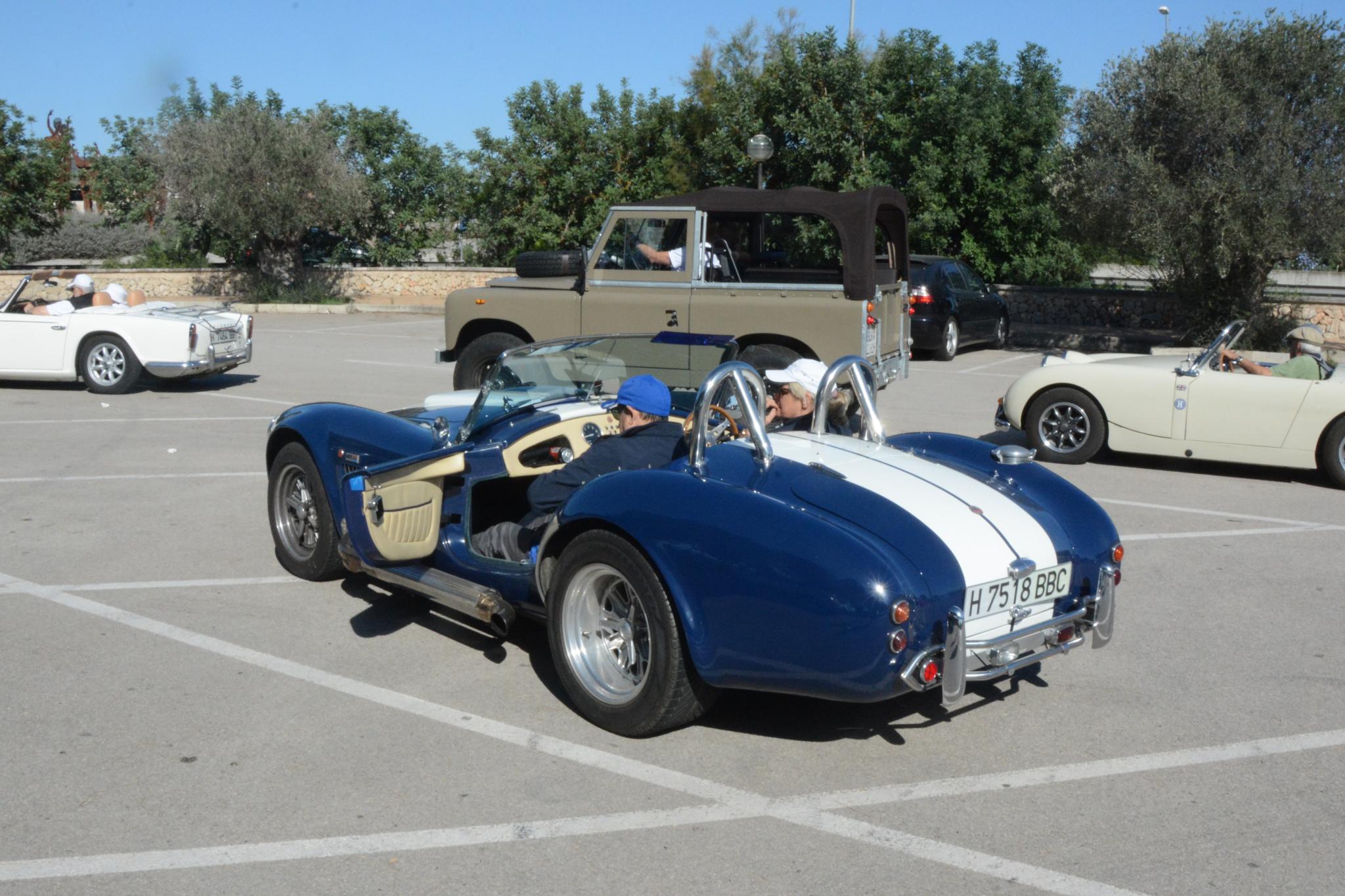 Even in a quick Cobra you can take the wrong road.

After some time, realising that they had no hope of getting back on track, a decision was made to head directly to the finish. This navigational hiccup is no reflection on their ability, I mention it only to illustrate to you how challenging finding your way on a Classic Car Club rally can be. So one contender down, 26 to go, but at least they made it to lunch. Next the route took us through some of the inner farmlands on roads we don’t often travel. Not much traffic, great views and quiet villages, lovely roads too. It took concentration to follow the route and to answer the question along the way. This is where we lost the club membership secretary Ray and his better half Sue to an electrical glitch in the ignition system of what is normally a bullet proof drivetrain known for its reliability. I’m talking about a small block injected Chevy Camaro which was eventually taken home on a truck. So 2 down and 25 cars to go and no lunch for them.

Along the route we also had to find 3 bags containing scrabble letters, to be used later on to create words as yet unknown. This is where the rally lost yours truly and the blonde in her trusty Mercedes 380SL. Also known as very reliable cars whatever their age. However this one was obviously finding the navigation too much. A really, really unusual failure of the vacuum actutor on the auto trans resulted in oil being sucked into the engine producing voluminous clouds of white smoke. Imagine a steam train on full throttle but with the addition of the smell of smouldering oil. So 3 down 24 to go. Never made it to lunch, limped home hungry and smelling of oil. Just two kilometres from the finish the fourth hiccup took its toll. The electric fuel pump on Seppi’s Jeep Cj7 packed up. Luckily, and for reasons unknown, he still had the original working mechanical pump on the car so it was an easy fix to swop back. Especially for one of the best mechanics on the island. So he and his girlfriend made it to lunch.

Most of this story is recounted by our photographer of the day, Helen Pitt. She adds that if you missed one of the questions en route it was hard to know where to pick up again because they were all consecutive and the directions depended on finding the previous clue.

Arriving at the finish in Selva at the restaurant Foc i Caliu the competitors were faced with a final challenge, making up car names using the 7 Scrabble pieces collected en route. Each letter had a different value as in the board game. Even this part wasn’t so easy, especially if you hadn’t managed to find the bags of letters on the way. The restaurant did a great job with fine food and service. And there were 4 less for lunch.

First place went to Nick Scantaberry and Jim Bell in Nick’s Chevy Nova. Second were Pedro and Anne Alomar in their Saab and in third place, Michael and Sabine Lobecke in their Alfa. More on how we got on fixing the blonde’s car next week. I hope!