Scene from The Mallorca Files. | BBC

That's all folks! Series one of The Mallorca Files drew to a close on Friday. But don’t worry, on Friday the cast and crew called it a wrap in Majorca for a two week festive holiday before they return to the island to continue filming series two - two episodes of which have already been shot on the island - and male lead actor Julian Looman told the Bulletin on the eve of the final day’s filming in the mountains that he and his colleagues cannot wait to get back to Majorca in the New Year.

The first episode of the ten part series broke all daytime TV records for the BBC when it premiered on BBC1 two weeks ago.

It pulled in some two millions viewers and the audience continued to grow on a daily basis - much to the delight of the cast, crew and producers. Now, having been sold to over 60 countries, series two is already being filmed and the producers are hoping that there will be more to come.

For the two main stars, Julian Looman and British actress Elen Rhys, who plays detective Miranda Blake, it has been a tremendous learning curve and a wonderful experience, according to Julian. Their dynamic – sometimes in sync, but mostly not – sets the rich humour and playful tone of the series, marked a welcome return to the police caper and Julian said that they have had a great time working together and seeing their on and off screen chemistry develop.

“It’s been hard work, exhausting at times, we’re always the first to turn the lights on and the last to turn them off every day, but having seen the audience figures and how well the series has been received and reviewed has not only been a pleasant surprise but also, in my opinion, a just reward for all the hard work the whole team has put in to the first series and is channeling in to the second."

“Obviously, we’re both two very different human beings and sometimes it was hard for us to judge how we were coming across together on screen. But we have formed a good bond and it’s a great experience working with her, she’s very inspiring,” Julian said.

“I’ve been blessed in every way! She was in the same situation as me with a baby, and from day one, we have really supported each other. We think about the same things, and we are both sometimes sad that we are not at home more. But it’s great to have this joint experience and to enjoy it together."

"Before filming began, we had ‘chemistry readings’ at the auditions in London. I tried out with a couple of different Mirandas, but it was immediately obvious that I had the best chemistry with Elen. As soon as we read the script together, it all fell into place. And, we’ve now completed two episodes of the next series."

“We’ve filmed in Palma’s beautiful theatre and been up in the mountains over the past few weeks."

“I have to admit I did have a preconceived idea that Majorca was all about hen and stag parties before I came here but I have fallen head over heals in love with the island. Spending seven months of the year working here is a total luxury. The island has so much to offer and every location is so different and exciting."

“It’s amazing that such a tiny island can offer so much and we are doing all we can to get the very best out of what the island has to offer. Places like Lluc, the mountains and Palma which is so cosmopolitan, it’s got this great international flavour to it and the crew is made up of people from all over the world so there’s a real international feel to the set and team. It’s such a pleasure, as an actor, to be able to work with such great people in such a wonderful location. I guess there’s a B side to everything but I haven’t come across it yet."

“Now we have two weeks off for Christmas and then it’s straight back to work and I can’t wait to come back."

“I am also looking forward to the series being broadcast in Germany. However, in between filming blocks here I have to keep popping back to Munich where I spend eight hours every day in a small dark room, all alone, watching myself on screen while I dub my parts in German. I wanted to do it in my own voice, so in a way I am having to act out series one all over again. But it’s the best option. I know the location, the stories, the humour and I think it will go out in the Spring. Across the rest of the world, it will be broadcast with subtitles, but not in Germany obviously,” he added. “ I couldn’t stand the idea of someone else’s voice over mine."

And, apart from having developed and expanded his acting skills he has also learnt some new tricks and never been healthier.

“As viewers will have seen, there’s plenty of action, running in particular and I’ve never been so fit,” he joked. 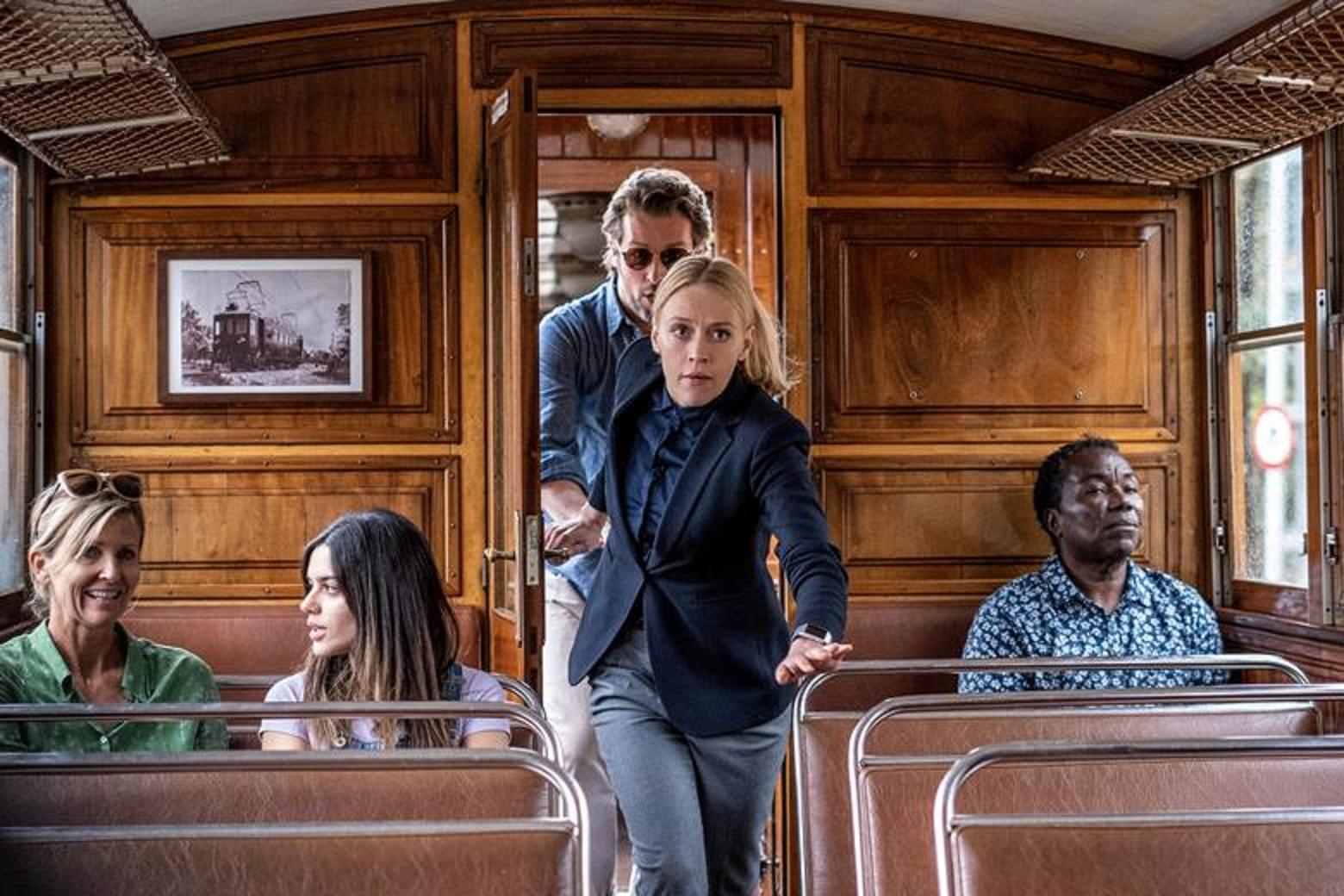 “I’ve also really enjoyed doing my own stunts and the driving, like I said, it’s been, and is, a huge learning curve and I’m extremely grateful to have been cast as Max. We are all well aware that this is not a really dark crime thriller, that’s not the idea behind this production.
We don’t particularly want to be taken too seriously."

“It’s supposed to be fun, entertaining, something different to the rest of the series which are on TV at the moment and of course, we’ve always got the sun shining over our heads...”

“I think the series has a really good and positive vibe to it and I hope that has come across in the first series. As we’ve developed, the story lines have become more grittier, but I think the banter and relationship between the two detectives is also very key to the overall flow of the series,” Julian said.

“When I first read the script, what I really liked about it was the Moonlighting aspect. These are not only crime stories, they are also about an ongoing relationship and I am glad the audience have been enjoying it.”

Now, with millions of Britons about to start thinking about their summer holidays for next year, there is no doubt that The Mallorca Files has given the island priceless publicity.

terry peters (canada) | about 1 year ago

A most enjoyable show. Hope there will be an episode with Mr. Looman doing at least one aria. Our cruise ship only got to Palma, of course, so I didn't do much more than explore a little of the city, but the episodes illustrate why my late parents used to go every year. Keep up the good work.

Valerie Henderson | over 2 years ago

Can't remember which website I enthused about this series but here I am again. With the long, dreary dark nights in Europe, this is such a tonic. Sunshine, a bit of will they, won't they (probably not allowed in this day and age) but TV series need a HUGE influx of European actors (actually from most countries) Looman speaks several languages and sings. Actors need to up their game!More, please.

Valerie Henderson | over 2 years ago

I just loved this series, great for the long, long, endless winter nights. Sunshine, all a bit silly will they, won't they... should we say this, in this day and age, but it certainly cheered me up. Wonderful scenery and I have been to Mallorca so am familiar with many of these places. look at Looman's background, several languages, an opera singer, honestly I could sink to my knees with gratitude as a bit of new blood is pumped into the slowly stagnating, endlessly repeating TV Channels for which we pay a licence. More, please