The oxtail was one of the best and worth a 10. | Andrew Valente

There has never been a time when I needed a reason for visiting a Chinese restaurant: I had my first Chinese meal when I was 13 (in the university area of Edinburgh during the Festival) and I have adored the Chinese style of eating ever since.

But when I went to Hemudu last week, I did so for two reasons: having tried their superb €18.50 menú del día last September, I wanted to check out their à la carte dishes — and it was the start of the Chinese New Year.

The Chinese are the most superstitious people in the world and the dishes they eat during lunar new year meals are loaded with symbols that will bring good fortune, happiness and wealth during the coming year. Anyway, that’s the belief. Although I’m not a believer I nonetheless went through the motions and ordered dishes that had some lunar new year symbolism.

Spring rolls are a must at the new year because they symbolise the old imperial gold ingots and, therefore, future wealth. As I had already tried Hemudu’s spring rolls (and gave them a 10) I went for rolls filled with roast duck.

Filled? They were packed tight with slivers of duck that were tender and moist and really tasted of duck. I’ve never had such a well-stuffed roll and seldom has a wrap been so crunchy. I don’t know that oxtail has any symbolic role in a new year meal, but what I do know is that Chinese cooks work wonders with all cuts of tough meat — even with sinews, which they do as soft as butter on a hot August day.

Oxtail is like shin of beef (which signifies stability on the new year table) in that it needs long slow cooking to break down the tough connective tissue in those cuts of meat.
However, there’s a knack to doing these sinewy cuts: they need an extensive cooking time, but there comes a moment when the cooking has to stop. If it doesn’t, the meat’s collagen, which holds the fibres together, will melt away and leave nothing but unappetising strings of tissue.

This is what Chinese cooks are so good at: they can get the meat on an oxtail to be butter soft but with enough collagen to bind the tissues and preserve the meat’s density.
The bony knobs of tail were cut through with a clever so the meat was clinging to smallish pieces of bone and could be picked off with chopsticks.

This was a scrummy dish and one of the best pieces of oxtail I have ever eaten. I had no hesitation in giving it a top 10 rating. You’ll love it, Monro.

Two superb meals in the space of less than four months confirm Hemudu as one of the best Chinese restaurants Palma has ever had. It is superior on all counts: the dining room is stylish, cooking standards are high, portions are more than generous and there is an excellent choice of dishes. It comes as a bit of a surprise that prices are most reasonable — and sometimes downright economical. The duck rolls were fabulous: moist slivers of duck packed into crunchy wraps as tightly as sardines in a can. 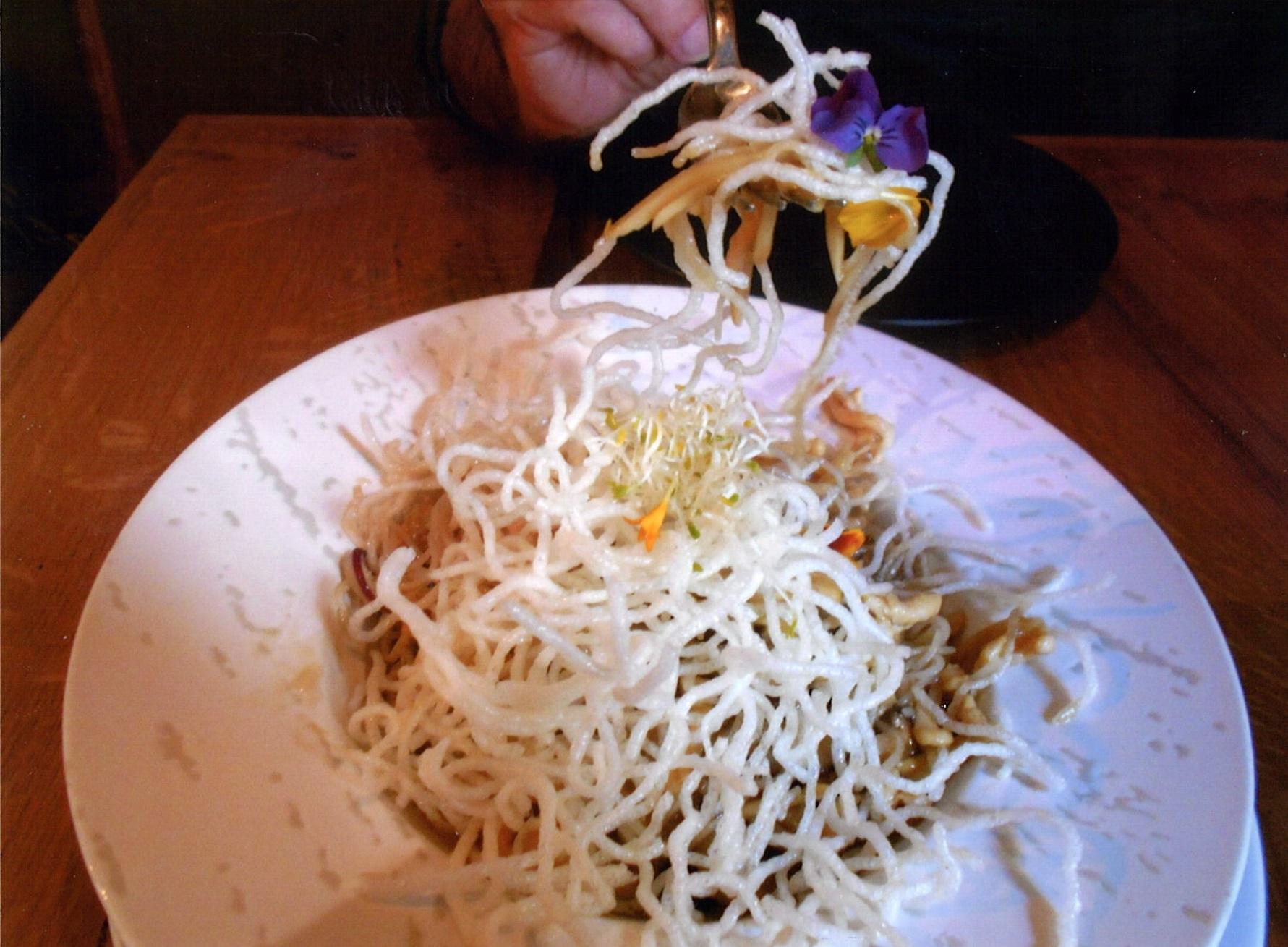 The dish with crispy and soft noodles plus snippets of chicken in a tasty sauce was different and delicious. The oxtail was one of the best I’ve ever had and was worth a 10.

Open every day for lunch and dinner. They do an excellent €18.50 menú del día from Monday to Friday. The dining room isn’t very big so it’s best to book, even for lunch on weekdays.