There are some magnificent women in the nautical world. How about Laura Dekker, the Dutch sailor who circumnavigated the globe singlehanded – finishing in 518 days at the tender age of 16. Or Captain Belinda Bennett, who was not only the first female captain at Windstar Cruises, but also the first black female captain in the commercial cruise industry. Then there’s millionaire businesswoman Angeliki Frangou, the Greek Chairman and CEO of global shipping and logistics company Navios Maritime Holdings. And Carol Howle, the low-profile head of BP Shipping, responsible for a fleet of more than 90 ships, including 14 liquefied natural gas carriers and 25 crude oil tankers. We also have Jan Swartz, President of Princess Cruises, overseeing a global company with a fleet of 18 ships that carry 1.8 million passengers annually. But, and you knew there was going to be a but, these leading ladies are in a lonely minority.

Overall, the shipping industry as a whole remains entirely male dominated. Women employed on ships comprise only 2% of the total workforce, with most of them found on cruise ships and domestic ferries. We need more women. And, thanks to the concerted efforts of many, they’re coming.

In a touch over four weeks, the world will be celebrating International Women’s Day. And in a barrier-breaking, history-making move, that very same day, Celebrity Cruises will be setting sail with a first-ever all-female bridge and officer team. They’ve even created an accompanying hashtag - #BRIDGEthegap.

Celebrity is no stranger to female empowerment. Starting at the top, the President and CEO of Celebrity Cruises is the very female Lisa Lutoff-Perlo. Appointed in 2014, she became the first woman to lead one of Royal Caribbean Cruises’ brands and is the first and only female CEO of a cruise line listed on the New York Stock Exchange. Lisa is an outspoken champion for diversity – especially in the recruitment of women to leadership roles. Barely a year later, this championing was evidenced in the naming of Captain Kate McCue as the first American woman to captain a cruise ship.

In August 2015, a 37-year-old Captain Kate McCue took the helm of Celebrity Summit, a 91,000 ton 965 foot ship accommodating 2,158 guests and 952 crew members. In 2018, she left Celebrity Summit for Celebrity Equinox and then, in 2019, she was given the distinguished honour of commanding the newest ship in the Celebrity Cruises fleet – the billion-dollar Celebrity Edge. At 129,500 tons and hosting 2,918 guests, she’s another step up the cruise ship ladder for role model Kate. 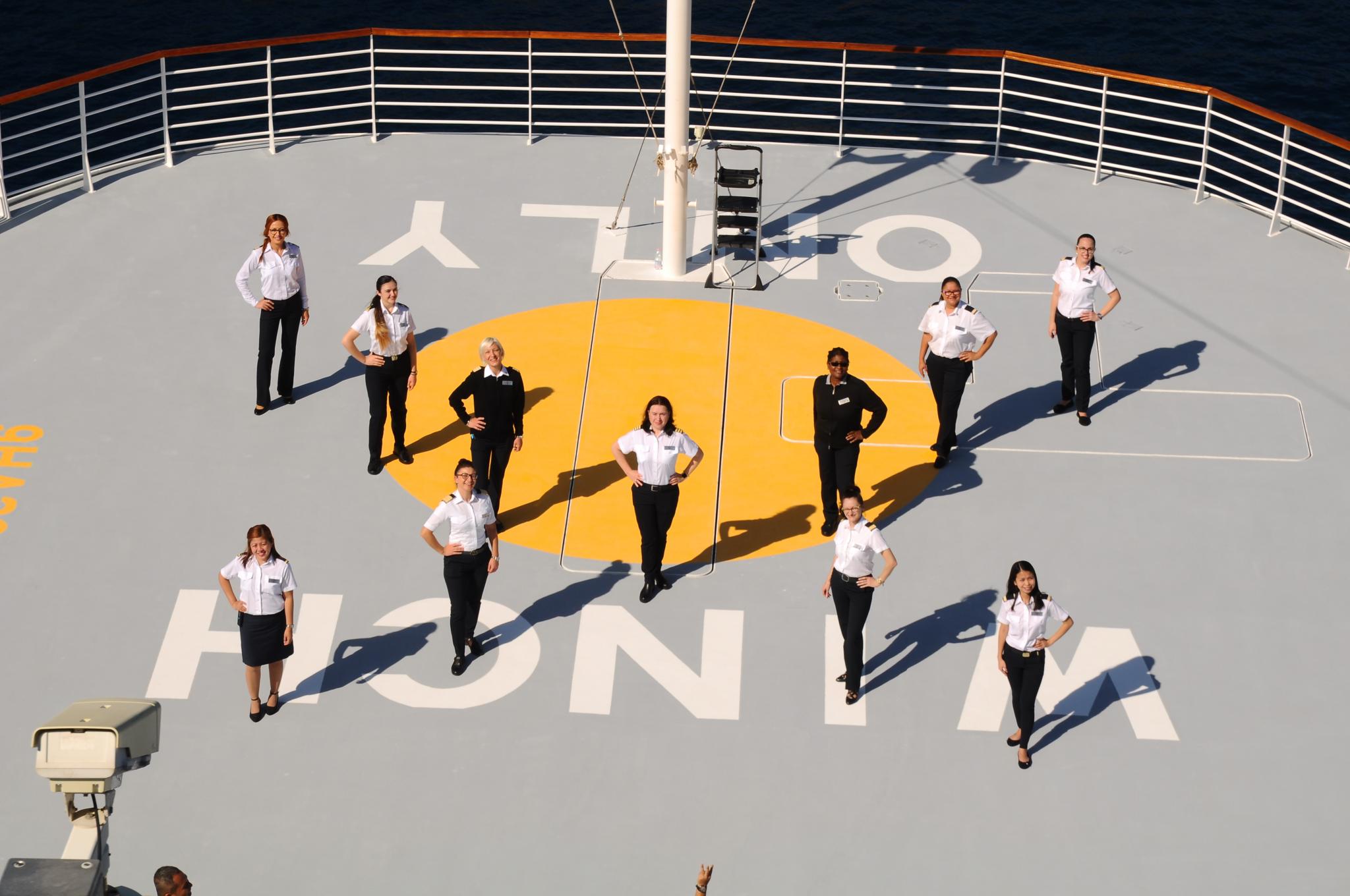 Speaking of role models, while Kate was the first American woman to lead a cruise ship, she had several other trailblazers to look up to. In 2007, Swede Karin Stahre-Janson was named captain of Royal Caribbean’s Monarch of the Seas, making her the first woman to ever be in command of a modern mega cruise ship. Inger Klein Thorhauge from the Faroe Islands became captain of Cunard Line’s MS Queen Victoria in 2010 and Sarah Breton from Essex became the first female captain of a British cruise ship the same year when she took on P&O Artemis. In 2011, Dane Lis Lauritzen followed in Karin’s footsteps and became the second ever female captain for Royal Caribbean on Vision of the Seas, while Margrith Ettlin from Switzerland took on Silversea’s Silver Explorer in 2013. And don’t forget the aforementioned Belinda Bennett who took up her noteworthy role in 2016. Needless to say, they still remain a minority.

Back to #BRIDGEthegap and the International Women’s Day sailaway. For this historic milestone, Kate will be joined by 26 other incredible women from 17 different countries. These include Staff Captain Maria Gotor from Spain, Guest Relations Director Julie Sherrington from the United Kingdom, and Second Officer Nicholine Tifuh Azirh who herself was the first West African (she is from Cameroon) ever to work on the bridge of a cruise ship when she was hired in 2017.

“We are all passionate about closing the gender gap,” said CEO Lisa Lutoff-Perlo. “Over the last few years, we have worked hard to diversify the crew on board and bring more women than ever into our industry. None of this could have been possible without the leadership and shared vision of the extraordinary men and women I work with every day, led by Patrik Dahlgren and Brian Abel who take this challenge to heart and have made it possible. We are fortunate to have many incredible, experienced and beyond-qualified women who have worked tirelessly to achieve these positions. And we also celebrate the many men who continue to support them and help champion having more women crew onboard.”
Senior Vice President of Global Marine Operations for Royal Caribbean Cruises Ltd, Patrik Dahlgren, who has spearheaded Celebrity’s bridge diversification efforts under Lisa’s leadership, added: “Since 2015, we have raised the percentage of qualified women on our navigational bridges from 3% to 22%. Now, we hope this all-time industry-high will continue to grow; we just need more women to raise their hands for careers at sea, especially in engineering.”

And Captain Kate McCue had this to add: “Excitement does not even begin to describe how I’m feeling about working alongside these incredible, barrier-breaking women on Celebrity Edge for this truly historic sailing. I am inspired every day by the amazing women we have working throughout this organization – both on land and at sea. They’re proof that there’s power in diversity.” 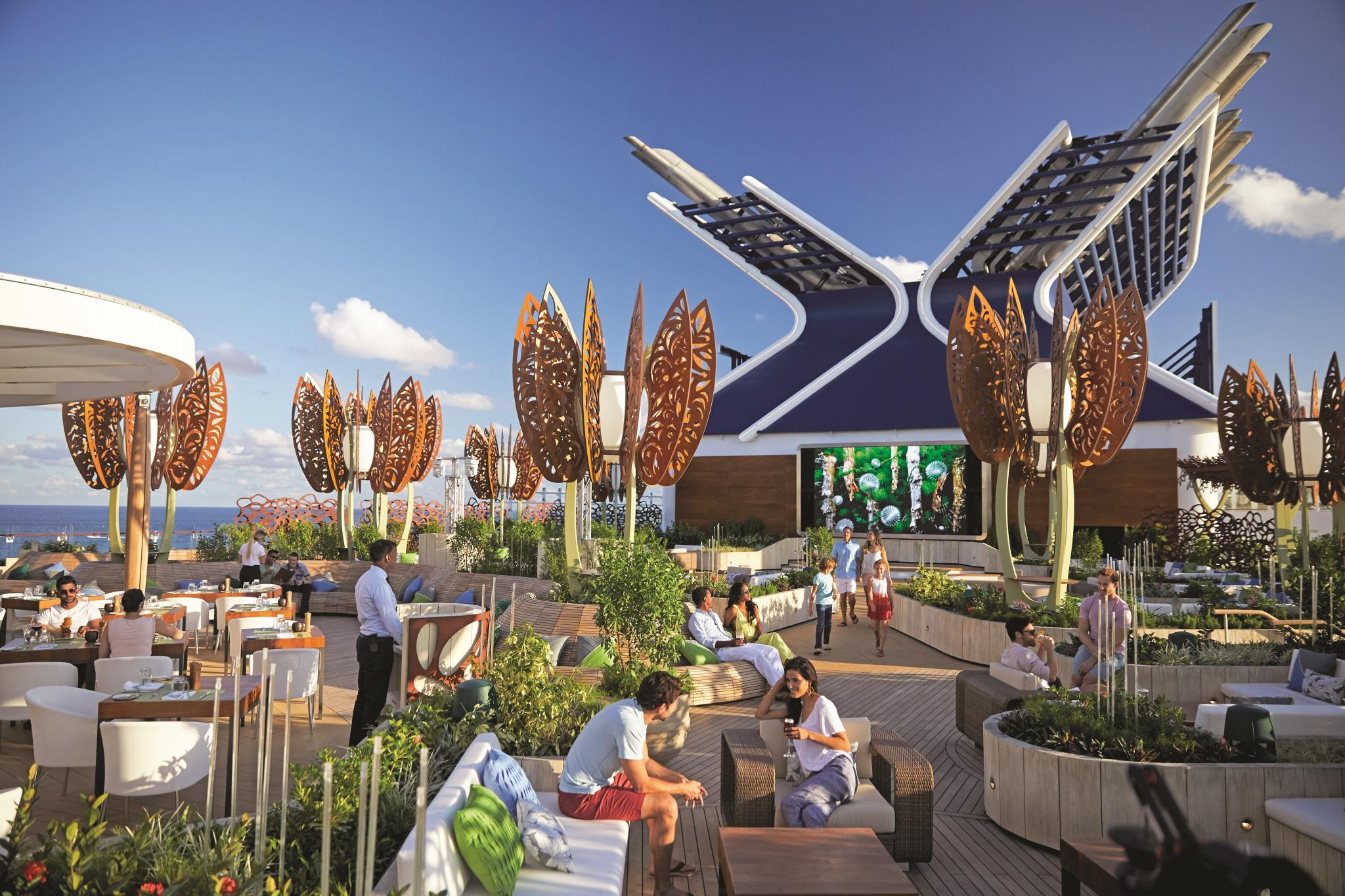 Just to round off this large dose of girl power, it’s worth noting that Nobel Prize laureate Malala Yousafzai is Celebrity Edge’s godmother. The Pakistani human rights activist named the ship at a ceremony in Florida in 2018, sending out a powerful message to crew and guests from all over the world. Meanwhile, the ship’s interior design has resulted from the work of women designers Kelly Hoppen and Patricia Urquiola.