Horacio and Pilar are Humans of Majorca: Art for Arts sake

The drive to see the artist took me to Ses Salines, a traditional small village in the South East of Majorca. Many will know the route to the salt mines and the Puerto Colonia St Jordi. A different landscape without the dominance of a mountain range. As I arrived into the village an iron conch shell was the ornament on the roundabout with a series of little houses at the entrance to the shell. I found it delightful and at that time I did not know it was the work of the artist I had crossed the island to visit.

My destination was to the workshop and inspiration of Horacio Sapere. Hopefully a chat with him and his dynamic wife Pilar was the order of the day. A huge barn awaited with paintings and sculptures in various stages of creation all around. In one corner a roaring fire and a table laid with the serrano, sobrasada, grapes and bread. This was to be no short visit but a total artistic experience.

Horacio is hard to define except to call him an artist in every sense of the word. A Poet, A Playwright, A Sculptor, An Artist… 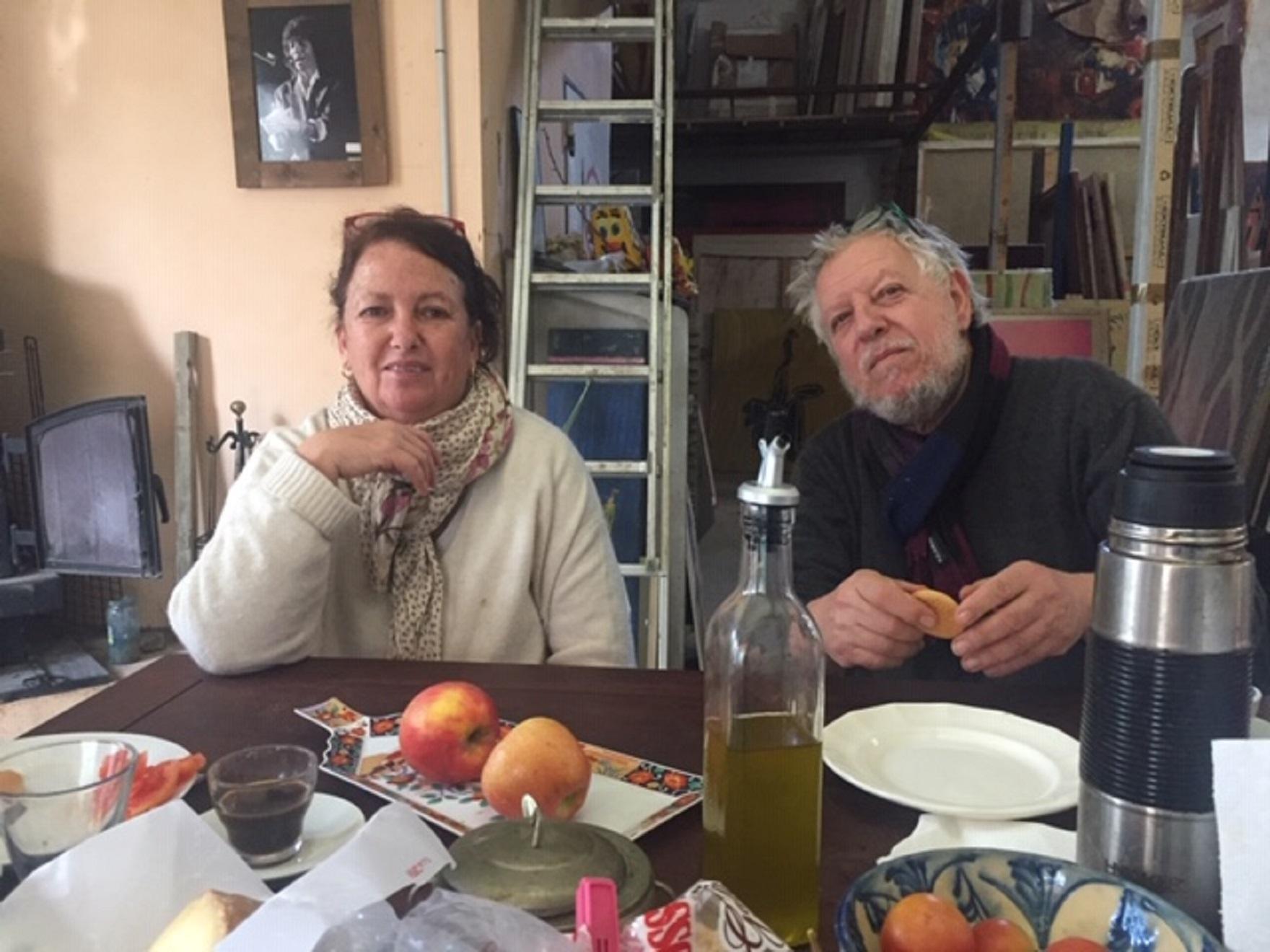 His dynamic constructions of chairs, tables, rooms, and dwellings and their placement in larger communities, landscapes and private psychological spaces range from architectural to poetic.

The Horacio of today has served a life apprenticeship to be where he is now. His childhood in Argentina became a problem in his early twenties when he was working in the arts and theatre in particular. His views were not shared by the majority and he was under some scrutiny. He had family in Europe and left his life behind in Buenos Aires to join them.
The rest, they say is history and now he is defined by an international career. Horacio Sapere’s work has been sold throughout Europe and North and South America. He is the recipient of numerous public installations and commissions in Spain and abroad for the last thirty years. He is also an active poet and playwright currently living in Ses Salines on the island he has called home for the last thirty-five years.

He met his wife Pilar when she visited a gallery in Palma showing some of his work. Thirty-five years of marriage later, two sons and the delight of living in Majorca still continues. Central Palma living has given way to a huge rural space with plenty of space to work. The direction of each day is defined by whichever way the artist is inspired. Horacio’s prolific work is filed in trays ready for those who want to choose original art to view and buy.

Some lucky people are allowed in to see the process and the finished work. His cooperation with an agent in Soller means that many of his original pieces hang in the beautifully renovated homes of the Soller Valley.

Exhibitions take him and his work to many places. In 2020 it is Montreal which will enjoy a Horacio Sapere Exhibition. Much the work I viewed on my visit will soon be en route to his legions of admirers in Canada. Meanwhile back in Palma, Finis Africae has opened under the talent of Pilar Esteve Gamundi – Horatio’s wife. She is very happy to be situated near the graphic design studios and enjoys the interaction the space has with all forms of the collective experience of art and literature in Palma. Fleming Square, in the Es Capitol district of Palma, has a new cultural space. It has been promoted by Finis Africae, and wants to become a landmark in the neighborhood. In recent years, Palma has seen the closure of historic bookstores, and others have been relocated. But in Finis Africae they see the sector optimistically. 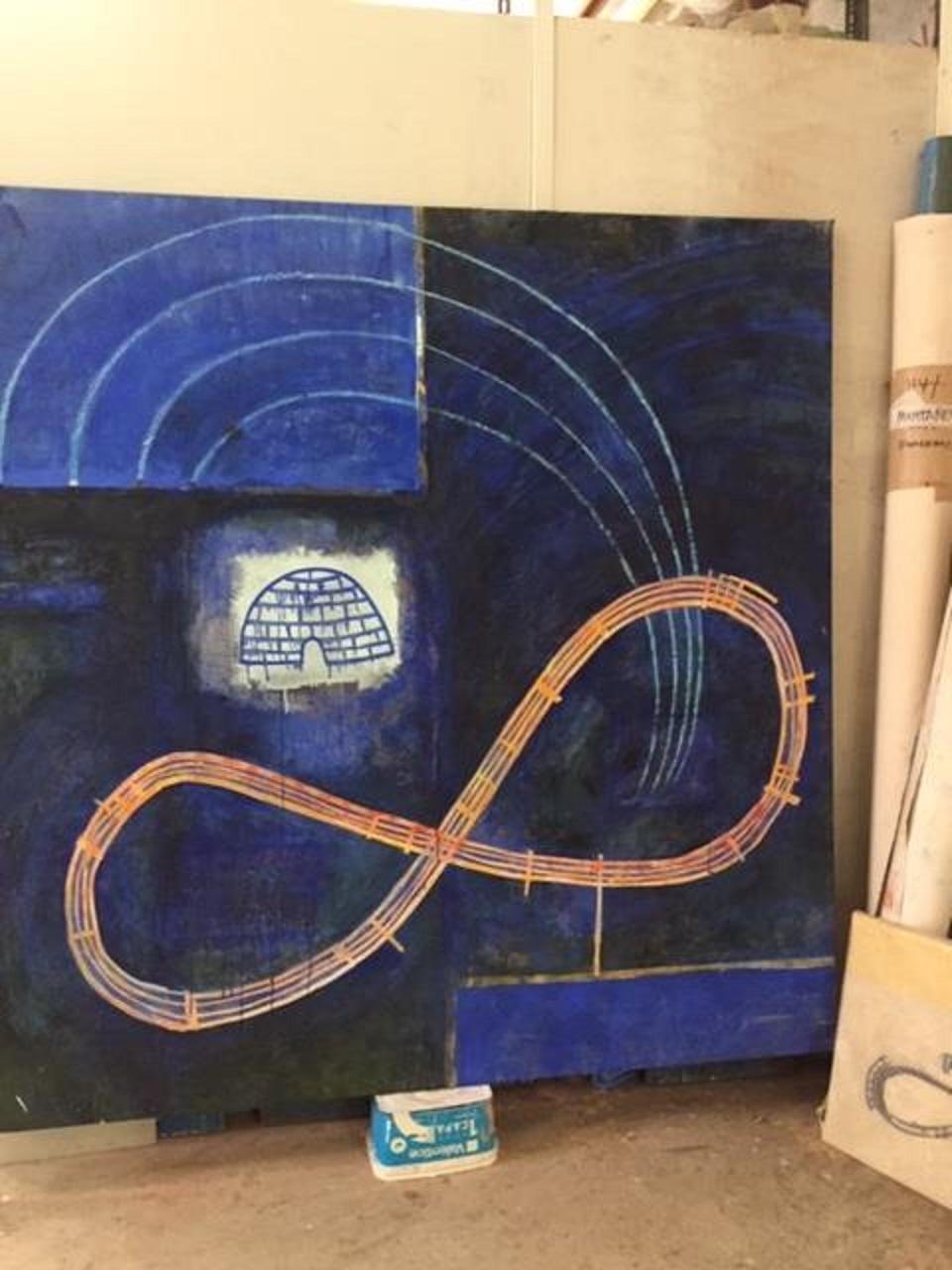 Finis Africae has opened its doors with the exhibition Stories of Outer Space by Pato Conde. At the same time, it presented the second visual book of the Sa Soll project. Finis Africae will continue to focus on culture. In March, Horacio Sapere and Maria Victoria Secall will be exhibiting, and in April the Ibizan photographer Pep Tur. A new space in Palma where literature and art become one.

Pilar is the light behind all this as well as running a publishing company and controlling the artistic world of her husband. Children’s book publishing is a particular passion but everything is fluid. The space she has created as Finis Africae will bend with the wind to include the reaches of all artistic endeavour. To be in the presence of such talent and talk of the past when Pilar left school in Majorca to go to University in Barcelona was enthralling. This was the era of uprising and challenges as the Franco era was ending. To be a student with freedom of expression was liberating for her and all her fellow students. Then to return to a Majorca also asking questions, developing and talking through art was a very exciting place for her to be. No wonder when she walked into that gallery where Horatio was exhibiting it was love at first sight. The artistic flows from Ses Salines and from Finis Africae, in fact wherever these two are the art in all its forms is there. Our discussion on my visit took us into the world of Visual Poetry and Mail Art. Concepts I had not really understood until it was explained by the roaring fire. In fact, I left thinking that absolutely everything is art in one form or another.

Horacio Sapere’s surname means ‘dare to be wise’ and I think he and Pilar are just that and live up to their name. The pleasure in meeting them was all mine… Finis Africae can be found at Alexander Fleming 17, 07004, Palma. Horacio Sapere can be contacted on Facebook.