The porco celta meats with potatoes and cabbage. | Andrew Valente

His name is Antonio Seijas but most Majorcans have heard of him by his well chosen nickname: the ambassador of Galician cuisine in Majorca. He gets this name because he combines being owner of the Hotel Cristobal Colon in Playa de Palma with organising annual events based on Galicia’s best known dishes, especially those featuring the region’s incredible range of fish and shellfish.

All connoisseurs of good eating also know that Galicia is famous for its red meats, which are among the best in the world. You’ll find these meats at any island restaurant specialising in chargrilled red meat. No decent red meat menu is complete without at least one of Galicia’s splendid cuts. 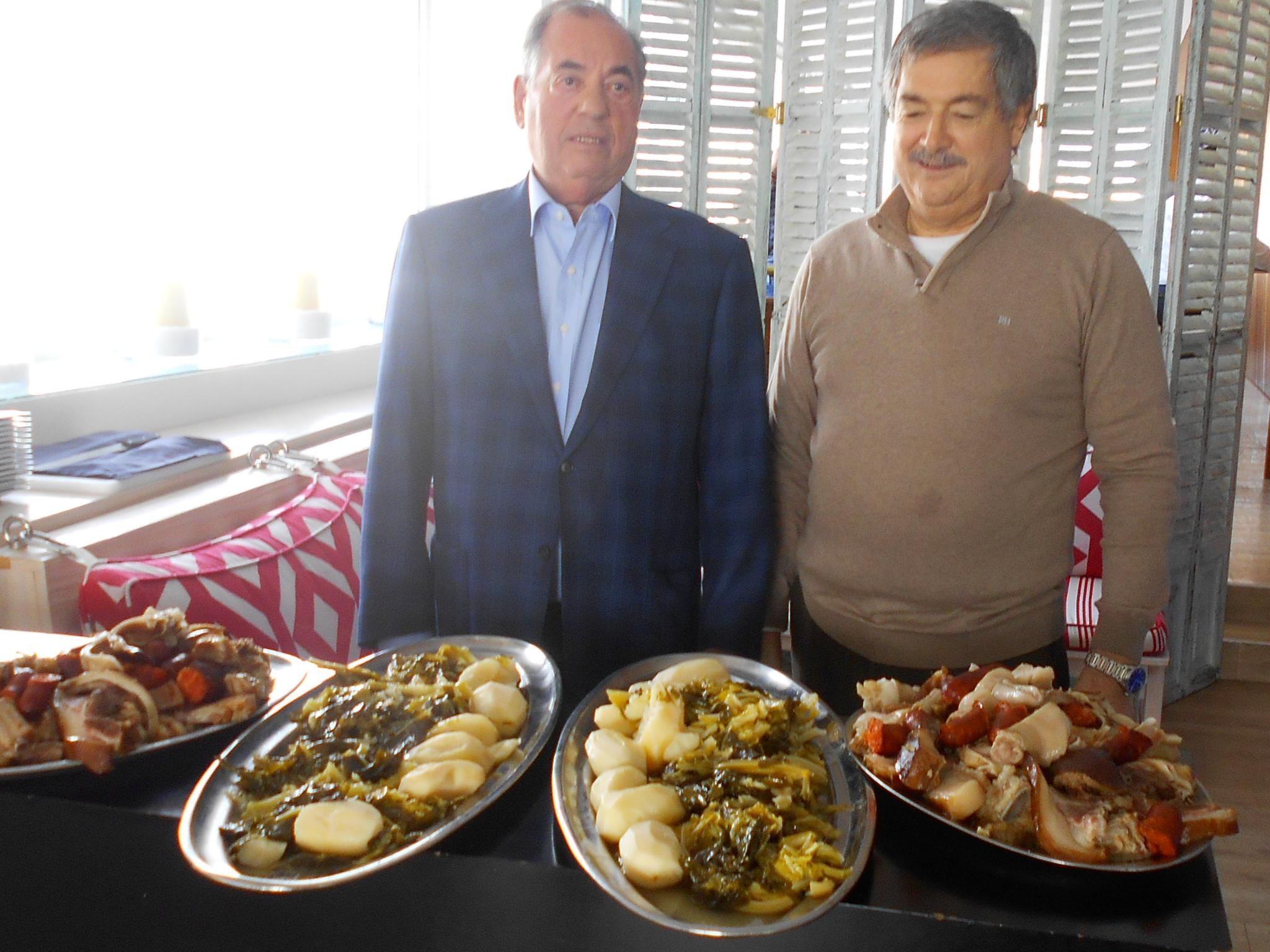 However, there’s another Galician meat that very few connoisseurs have tasted — and some don’t even know it exists. It’s called the porco celta pig and it’s native to Galicia. The reason we haven’t heard of it is that it went out of production a long time ago and it’s only in the past five years that breeders have started to resurrect it.

For the moment, it’s probably the most exclusive meat in Spain: no butcher in Majorca sells it and no Majorcan restaurant has it on the menu. It’s even unavailable to the vast majority of Galicians. It’s an unusual pig in that it has black and white skin. One ear is white and the other is black.

But thanks to Antonio Seijas in his role as ambassador of Galician cuisine in Majorca, last week a group of us sat down to cocido de porco celta — a unique hot pot that featured every cut of the pig as well as chorizos made with its meat and flavoured with Galician spices.

The meal was at the Real Club Náutico and it was cooked by Antonio’s retired Galician head cook, Arturo Ojea. The meal was special in that it was Antonio’s tribute to the late Bulletin founder Pedro Serra. Those invited to the lunch were old friends of his.

The porco celta cocido is like other Spanish regional cocidos in that it is split into various parts. First a soup made with the stock from boiling all the different cuts. It included tiny pieces of pork as well as broken vermicelli. Unlike the other cocido soups, this one was light in colour and texture. It was the most elegant soup of its kind I’ve had and it was ideal for the gargantuan platter of boiled cuts that followed. 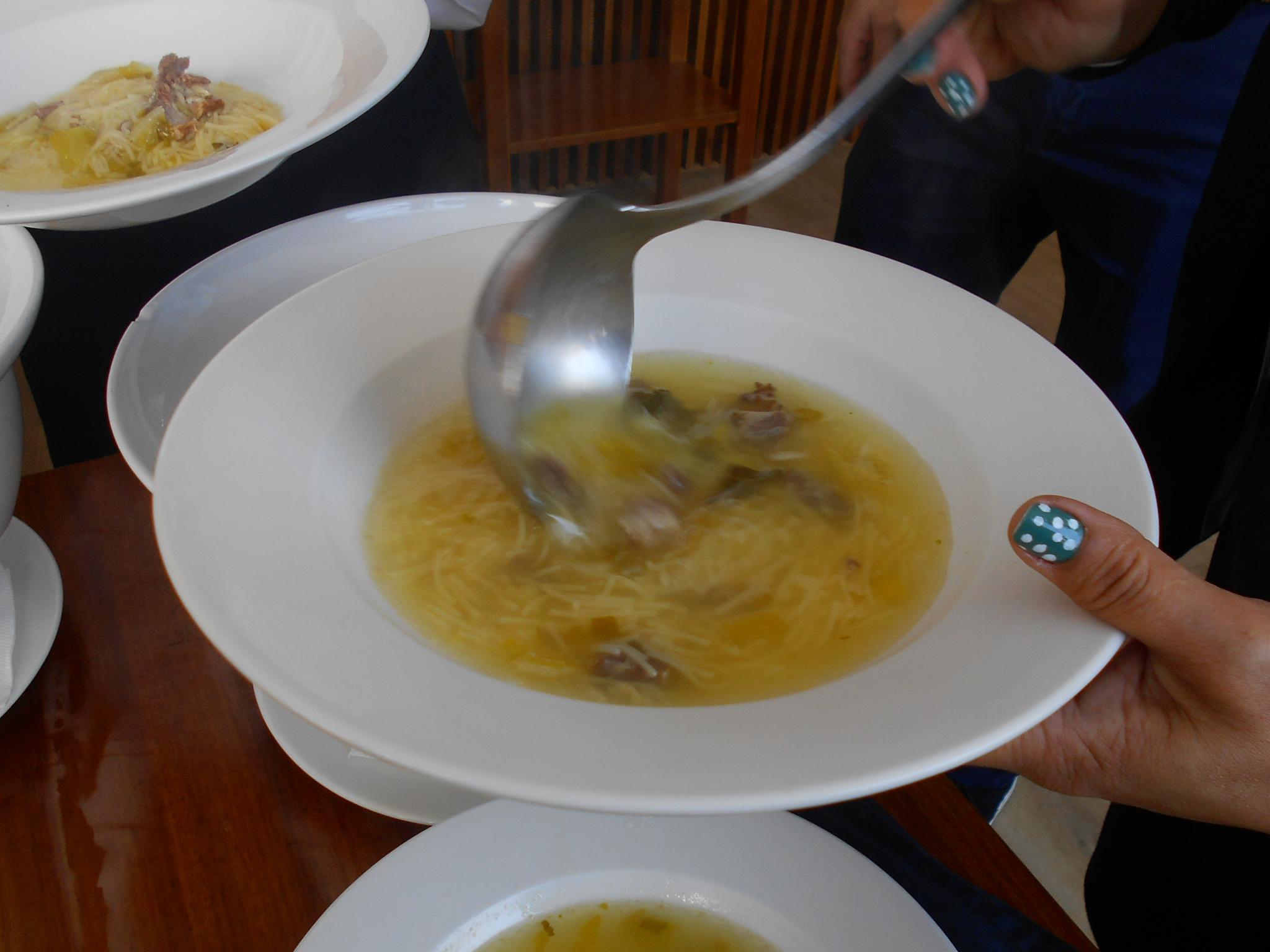 There was a platter of Galician potatoes and the leaves of one of the very green cabbages you get in that region. On the veggie side there was also a tureen of plump chickpeas.

The large serving dishes with the meats was a hotchpotch of the different cuts, including tails, ears, cheeks, spare ribs, chops and others. I was especially fond of the extremely meaty spareribs, the white ear and the lacón, the Galician equivalent of gammon.

One of the wines was Galicia’s famous albariño, one of the world’s greatest whites. I never tire of drinking it. The other was an incredible red. It’s called Pintia, a young wine (that is, it wasn’t aged in wood) but the date on the label was 2006 — it should have been well and truly over the top, but it had a beautiful taste.

How could this young wine from Toro still be so drinkable after 13 years? I don’t know, but I’ll try to find out and I’ll report back on the Thursday page.

Galicia is an Aladdin’s cave replete with gastronomic gems. The cooking is of an extremely high standard and it is based on products that are among the best in Europe. So much of what is truly excellent about Spanish cooking comes from Galicia and it is difficult to know where to begin.

For many people, Galicia means fish and shellfish — and rightly so, because the best of the sea is available off the Galician coast. The area’s seafood is so varied that a selection, no matter how vast, would still leave so much untried — at least until the next meal.

Most of the mussels eaten in Spain come from Galicia where fresh and canned ones form one of the area’s top industries. Galicia’s clams (almejas) are also superb and widely available.

In Galicia you will be served clams on their own or done in various ways, but also as an integral part of other fish dishes such as merluza (hake) or congrio (conger eel).

Percebes (goose barnacles) are also abundant in Galicia, although not so much as mussels, which means they are one of the more expensive shellfish. They are simply boiled and eaten cold — ideally with a prickly local white wine.

One of the great dishes of Galician cuisine is the pulpo (octopus) which many British people are reluctant to try because they think it will be as tough as old rubber galoshes.

But Galician pulpo — which you will see on restaurant menus as pulpo gallego, pulpo con cachelos or pulpo a feira — comes in thinnish circular slices and is as soft as butter and with a delicious taste. It is served lukewarm and on wooden plates. The slices of pulpo are sprinkled with paprika (usually slightly piquant), good olive oil is drizzled over and a couple of pinches of sea salt crystals are scattered over the surface.

I’ve had pulpo so soft I could masticate it simply by pressing it against the roof of my mouth with my tongue. It’s a dish full of textures and flavours but you should always have it at a Galician restaurant or one with a Galician cook. Nowadays all kinds of restaurants have pulpo on the menu but it’s bought in pre-cooked and what arrives at your table may not be as good as what you’d get at a Galician restaurant.

Galician waters are also teeming with fish and these give the local cooks and housewives a chance to show their culinary skills — although for the most part Galician dishes are noted for their simplicity.

Sardines in Galicia are a speciality and are larger than those in the Med. At the Mercat d’Olivar they are usually on sale as ‘sardina del norte’ but you don’t need that tag to tell you which are the Galician sardines — they are always so much bigger than the others.
Galicians are extremely fond of sardines grilled over wood and will eat huge amounts of them as a starter. Chargrilled sardines are sometimes served with boiled potatoes and strips of roasted red peppers.

Most of the other fish that come from the sea, river or lake are found in Galician markets and restaurants, including some of the lesser known ones such as lamprey, one of the most primitive of living vertebrates. Legend has it that King Henry I, son of William the Conqueror, died of a surfeit of lamprey. So if you come across lamprey be sure to eat it in moderation.

Galicia is also fortunate in having fresh water fish, especially trout, salmon, eels and some of the crayfish family. It is also famous for its oysters (ostras), razor fish (navajas) and winkles (bigaros). And then there is the most celebrated shellfish of them all — the vieira or scallop, sometimes called the great scallop or pilgrim scallop.

The vieira is now one of the most expensive bivalves but centuries ago it was cheap, as were oysters both here and in England. The scallop is intimately associated with Galicia in countries all Europe because medieval pilgrims who did the route to the cathedral in Santiago de Compostela returned home with scallop shells sewn on to their hats. It was proof they had completed the pilgrimage.

Scallops are luckier than most creatures in that they are complete hermaphrodites —they have male and female genital glands and can take either role. Now, if that isn’t having the best of both worlds, I don’t know what is.

The orange-red part of the scallop is the roe, or coral, which is edible. The white edible part is the abductor muscle. Scallops move around by opening and closing their shells, thus propelling themselves through the water at amazing speeds and with incredible agility. The abductor muscle is used for this means of propulsion, so it’s a large well-developed piece of flesh that makes delicious eating.

You occasionally see fresh scallops at the Mercat d’Olivar and El Corte Inglés. If you have to open fresh ones, put them into a big saucepan over a source of heat for a few seconds. The shells will open and you can take out the edible parts of wash them.

As always with shellfish that has a delicate taste, the simple ways of cooking them are best. In Galicia, ‘vieiras al natural’ are the red and white part of scallops cooked in their shells. The coral and the abductor muscle are covered with a small amount of finely chopped shallots, a dash of wine vinegar, a drizzle of good olive oil and a little salt. They are put into a less than medium hot oven for about 15 minutes and are eaten hot.

Galicians also serve them in the bottom shell on a bed of chopped mushrooms cooked in butter, the flesh of the scallops having been gently cooked in cream and albariño white wine.

The white and red parts of the scallop can be coated in seasoned flour and gently sautéed in butter. You can also do them without the flour coating. Be sure to use plenty of butter and don’t have the heat too high.

Scallops can be cooked on skewers with thin pieces of fatty bacon, tomato, mushrooms and bay leaves. You can also sprinkle the scallop roe and flesh with herbs of your choice, wrap them loosely in tinfoil and bake them in the oven. This is one of the tastiest ways of doing them and also one of the simplest.

However, Galicians don’t live on seafood alone — they also have superb meats and poultry to fill out the daily menu. Galicia is Spain’s only autonomous community with two red meats that have ‘denominación especifica’ which guarantees its authenticity and quality.

These two meats are ‘carne de rubia gallega’ and ‘ternera gallega’, both of which come from cattle that thrive on the lush pasturelands. Large herds of cows not only mean a high production of meat but also an abundance of milk — and that means high quality cheeses. Galicia has four cheeses with ‘denominación de calidad’ status that guarantees its quality.

They’re on sale at El Corte Inglés and well-stocked cheese stalls at the municipal markets.
Ducks are also plentiful and capons are a speciality. Capons from Villalba are considered to be among the best in Spain. They are usually simply roasted in the oven and served with a chestnut purée. As I wrote on these pages in November of last year, Galicia cultivates Spain’s best chestnuts.

Galicia is such a wealth of gastronomic delights that I cannot possibly cover them in one article, so I’ll come back to them at a later date.