I’ve been celebrating Pancake Day all this week and indulging in some of my favourite sweet treats. Known as Shrove Tuesday, it is the traditional feast day before the start of Lent on Ash Wednesday, which is celebrated in some countries by consuming pancakes, as it was the last opportunity to use up eggs and fats before embarking on the Lenten but as far as I’m concerned, everyday is a good day for a pancake.

Pancakes have a very long history and feature in cookery books dating as far back as 1439. They have been popular in some shape or form the world over for centuries and Archaeological evidence suggests that pancakes are probably the earliest and most widespread cereal food eaten in prehistoric societies dating back to 5th century B:C!

From Indian dosa to Ethiopian injera, Vietnamese bánh xèo to Austrian Kaiserschmarm and Russian blini, the world loves a pancake, but perhaps nowhere more than the US, where fluffy stacks drenched with maple syrup are the weekend breakfast of choice for millions – not least because they’re simplicity itself to make. With their beautifully freckled surface, glistening straight from the pan, pancakes are delicious eaten simply with lemon juice and sugar, but they can be filled with a variety of sweet ingredients such as maple syrup, fruit, ice cream or chocolate sauce. They also make a good base for savoury fillings too, such as fried mushrooms, cheese, spinach, chicken and seafood – anything goes really.

If you invest in a proper crêpe pan, preferably non-stick, it can make preparing successful Pancakes easier – it’s a short-sided frying pan about 20cm across. Pancakes can be served as soon as they’re made but they can be made in advance. If making crêpes in advance, layer each crêpe between sheets of greaseproof paper, then wrap them in cling film. Store them in the fridge (for use the next day) or in the freezer for up to one month. More often than not, the first one out of the pan is always less than perfect. The up side of this phenomenon is that the cook get’s to eat it warm, straight from the pan while the second and third are in progress. In practice, that first pancake seasons the pan, leaving a light film of butter on which those that follow will slide. Don’t worry if your first attempts aren’t perfect; you’ll get better with practice When you see how simple it is to whip them up from scratch, you’ll wonder why you never did it before. 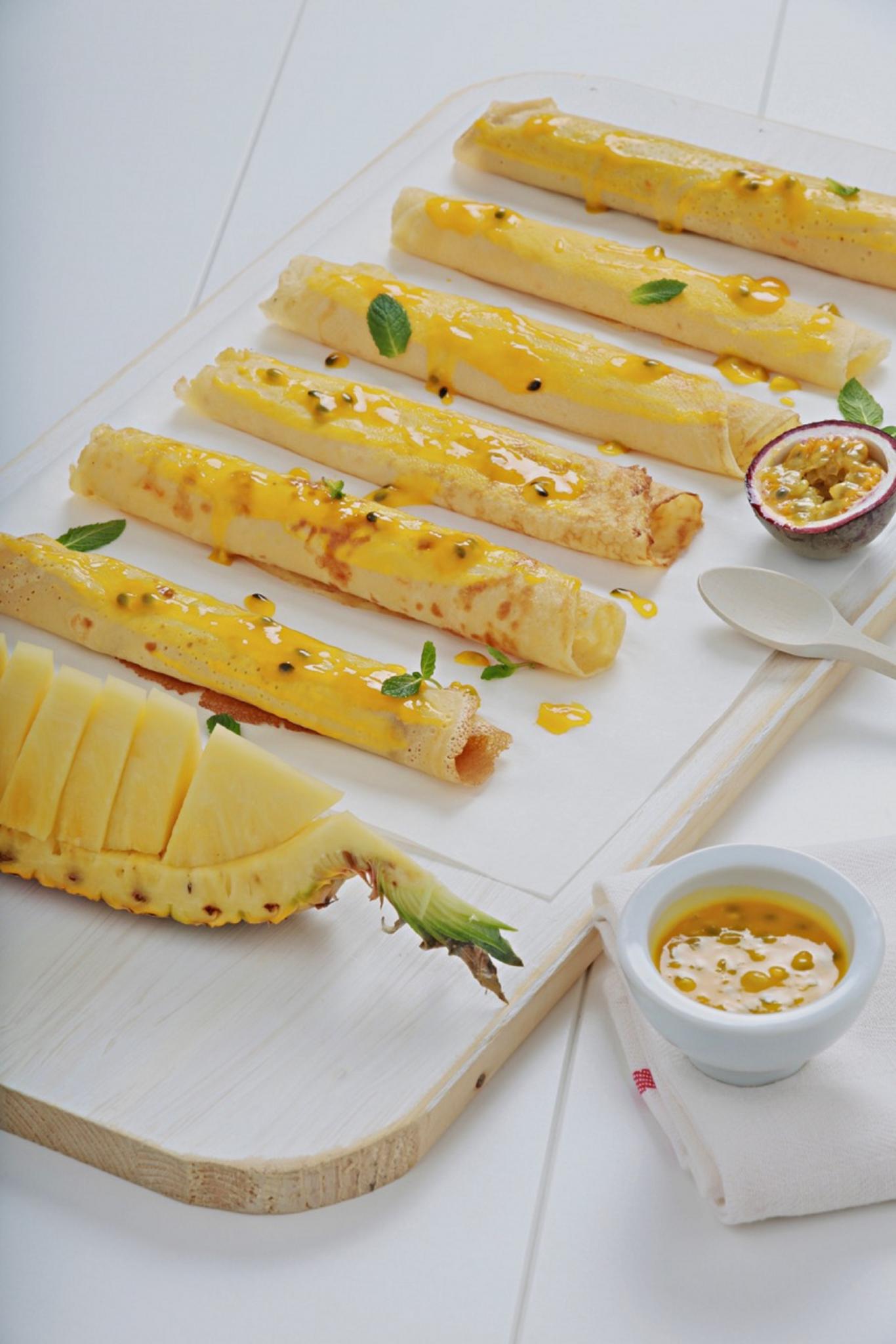 INGREDIENTS
Serves 4
16 pancakes (made from the basic pancake mix)

For the crêpes (basic pancake mix)

For the sauce
Place all the ingredients in a saucepan and bring to the boil. Simmer for 5-6 minutes until the sauce starts to thicken.

Roll the pancakes and place them in the sauce to warm through. Serve with crème fraiche or vanilla ice cream.

Mix together the flour, baking powder, vanilla extract and a pinch of salt in a large bowl. Blend in the, eggs, milk and melted butter to make a thick smooth batter. Lightly oil and heat a non-stick frying pan. Drop in 2 tbsp batter per pancake. Cook for 1 ½ - 2 minutes, until golden underneath and bubbling on top. Flip over and cook for a further 1 to 2 minutes. Serve with maple syrup, fresh blueberries & crème fraiche. 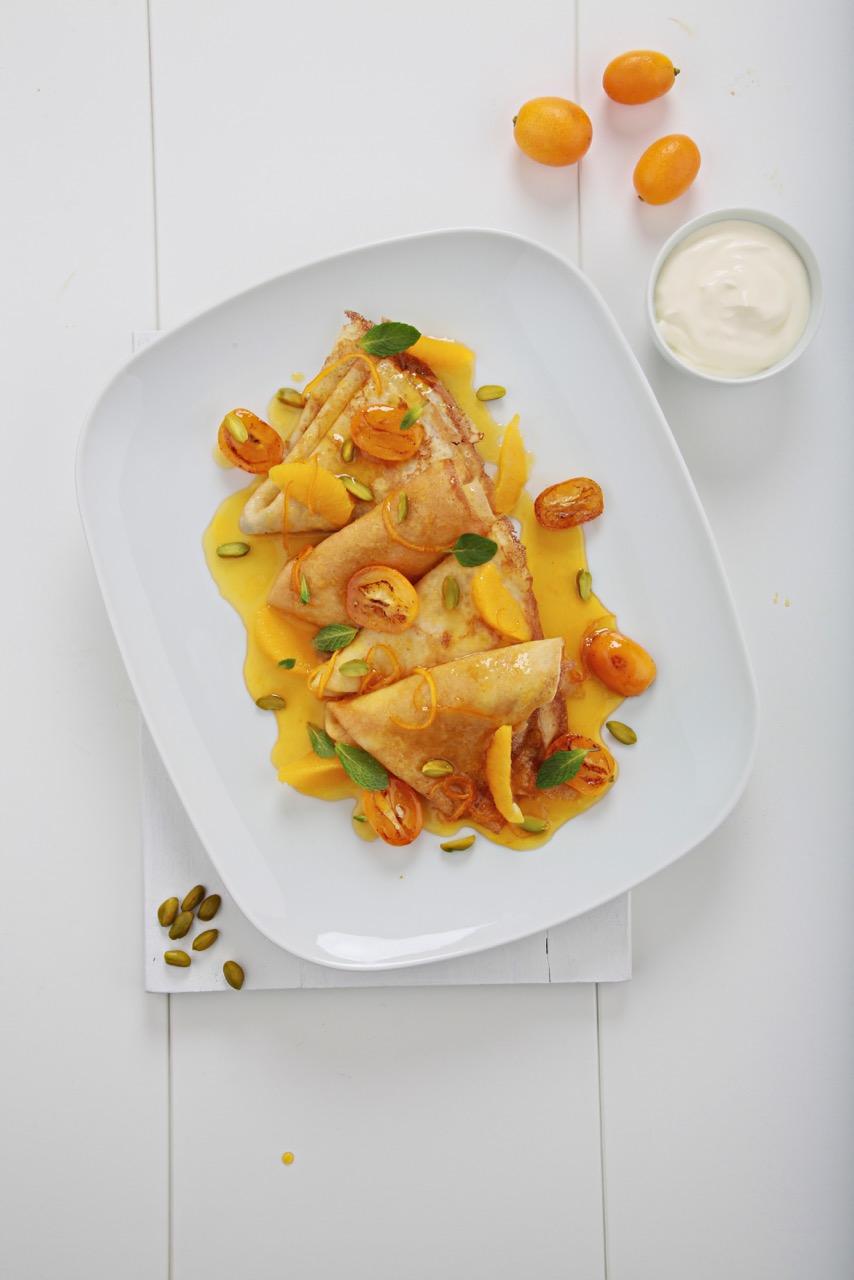 For the sauce
· 200ml orange juice
· 1 medium orange, grated zest only
· 3 tbsp caster sugar
· 3 tbsp Grand Marnier or Cointreau
· 12 kumquats cut in half
· Segments from one orange
· A handful of peeled pistachio nuts