Batters that work well are godsend

Batters are one of the trickiest chores in cooking and even some great cooks cannot be relied upon to get them right. One of the reasons I usually order batter-fried calamares when doing the restaurant review is that they give me a good idea of what the rest of the meal may be like.

They are also an indication of the cook’s culinary abilities. If he or she has mastered batter-fried food you can be sure their repertoire of recipes includes other simple dishes that are also difficult to get right.

I know many cooks (including myself) who are always on the look out for batters that work. In my case I have a couple that cover my needs nicely, but I’m always interested in variations on the basic theme. And sometimes it seems as if there are as many ingredients and methods as there are cooks who make batters.

In my experience, one of the nice things about people who can do superb batters is that they are always willing to share their secret ingredient or magic touch trick with a whisk that leads to perfection. One young cook who had had a chippy in England opened one in Santa Ponsa and his batter was one of the best I’ve ever had. He said it was an ordinary beer batter but that he added a tablespoon of vinegar and that was what made all the difference.

On the other hand, my sister also made one of the best fish batters I’ve ever tasted and it consisted of nothing but water, flour and salt. And over the years it worked every time. I used to watch her do it, taking note of everything she did, but when I tried it at home it was a flop. Perhaps her batter depended on the Scottish flour she used, or the soft water in her part of East Kilbride. These little things can often make a huge difference.

If you’ve found a batter that always works for you then you are fortunate and should stick to it. But there are hundreds of batters out there and one of them may be the one you have been searching for. Here are a few that give good results and which you may want to try.

Beer batter
I start with this one because it is my favourite, the one that always produces a light crisp covering, with the beer giving it an interesting taste.

It is especially good with all kinds of fish and shellfish. Pieces of cod fillet, always available at El Corte Inglés, fried with this batter make a neat version of British fish and chips. 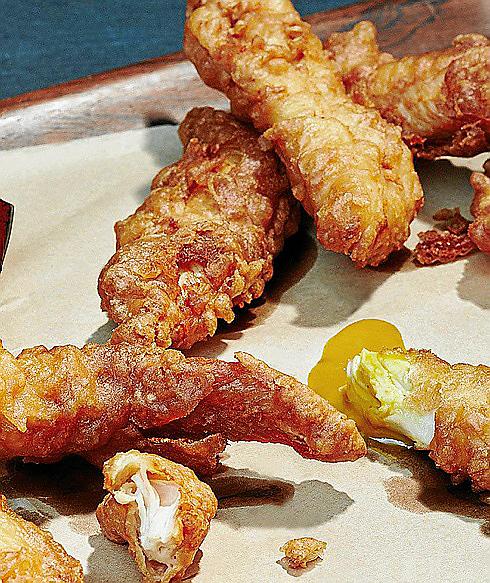 Put the flour and the salt through a sieve into a biggish bowl. Make a hole in the centre and pour in the oil and the beer. Gradually stir in the flour until you have a smooth mixture. Leave the mixture to rest for two hours. When ready to use, beat the egg white until it is light and fluffy and fold it slowly and carefully into the batter. Use immediately.

Japanese batter
This is a version of tempura batter, but not as minimalist as Japanese cooks make it. You will need: an egg, 300 mls cold water and 230 grs flour. Sift the flour into a bowl and lightly mix in th water and the beaten egg. Tempura batter is always meant to be used as soon as it is made. It is not important to beat it until smooth. A few lump are quite acceptable and some Japanese cooks create a good amount of lumps to give the batter a rough finish. This batter is for fish and shellfish. Use slightly less water for vegetables. 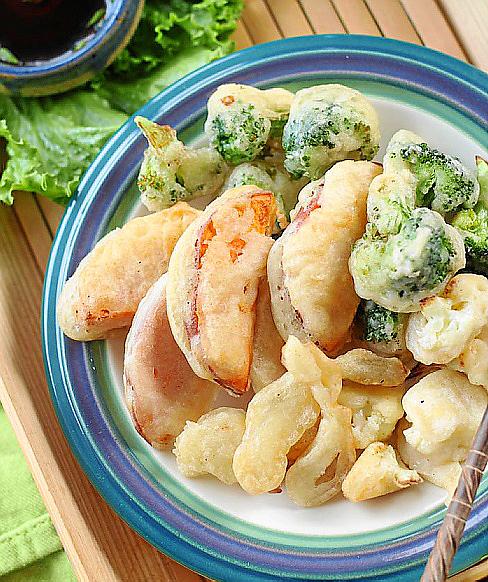 Chinese batter
The Chinese have dozens of batters depending on the main ingredient. This is a fluffy one for gambas and langostinos. You will need: 2 egg whites, 2 tbsps cornflour (maizena, on sale at all supermarkets) and a pinch of salt. 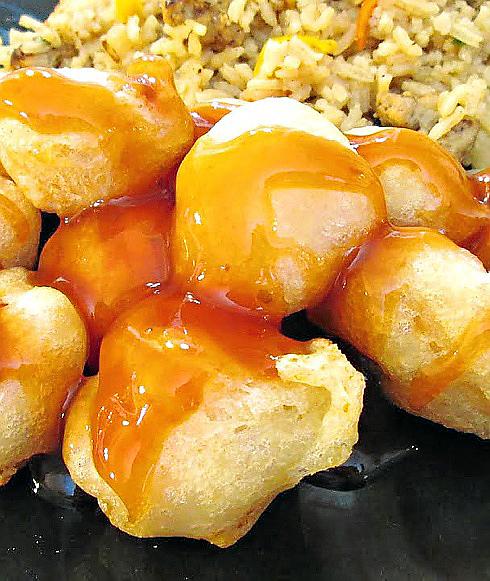 Whisk the egg whites until stiff but not too dry. Add the pinch of salt and fold in the cornflour, gently but thoroughly. This batter is excellent for gambas and langostinos but because the batter is so light it doesn’t always stick to the shellfish and you may have to use a teaspoon to heap it on. Holding the shellfish by the tip of the tail, lower it carefully into the hot oil and fry until of a pale golden colour.

Carême's recipe
Antonin Carême (1784-1833) was the great French chef and cookbook writer who is considered to be the funder of classic French cookery.

“Put 12 ounces of sifted flour into a bowl, dilute it with slightly warmed water in which you have melted two ounces of the best butter."

"Tip the pan and blow on the water to make the butter pour out first. Pour on enough water to make a rather soft paste, from lumps. Add a pinch of fine salt, two tablespoons of brandy, fold in two stiffly beaten egg whites and use at once.”

Provençal batter
This is another Carême recipe. “Into a bowl put 12 ounces of flour, two egg yolks, 4 tbsps of Aix oil, and enough water to mix the flour into a soft paste. Add a pinch of salt, two stiffly beaten egg whites and use.” 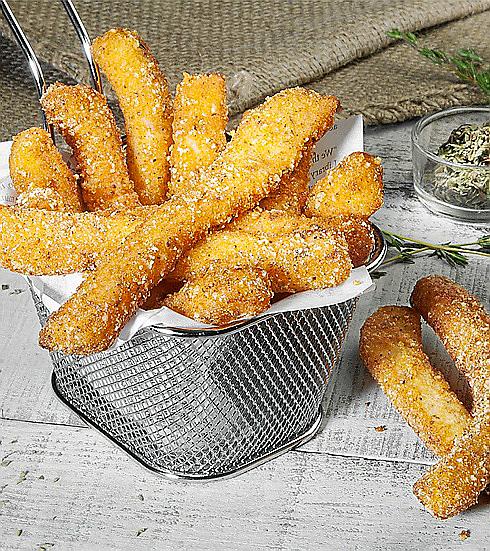 French batter
French cooks have some good batters and this is one worth knowing. You will need: 30 grs butter, 75 mls boiling water, 425 mls cold water, 170 grs flour, an egg white and a pinch of salt. 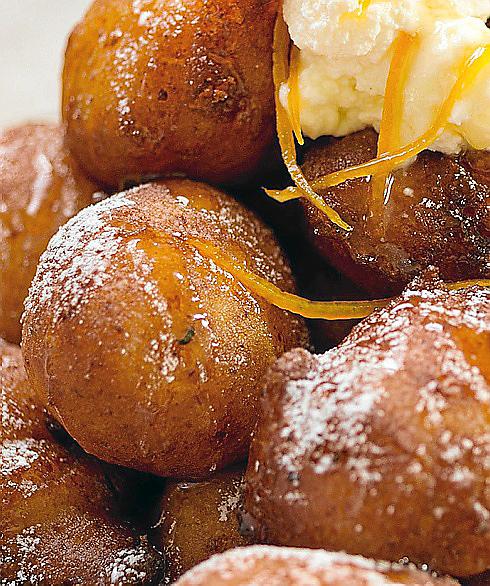 Put the butter into a suitable bowl and melt it by pouring over the boiling water, then cool the mixture by adding the cold water. Mix it gradually and smoothly with the flour. If the batter is savoury add a good pinch of salt and less if it is for fruit. Let it rest for an hour. Beat the egg white until it is frothy and fold into the batter. Excellent for apple, peach and orange fritters.

Italian batter
The Italians have always been good at deep-frying so their batters are interesting and worth trying. For this one you will need: 2 eggs, 300 mls white wine or cider, orange blossom water, 350 grs flour, 2 tbsps olive oil, 1 tsp salt and 2 or 3 egg whites. Beat the eggs with the wine or cider and add a little orange blossom water. Add this to the flour with the oil and the salt. Blend the batter with a wooden spoon until it is smooth and creamy and let it stand for at least an hour before using. At the last minute beat the egg whites until they are stiff and fold gently but thoroughly into the batter. 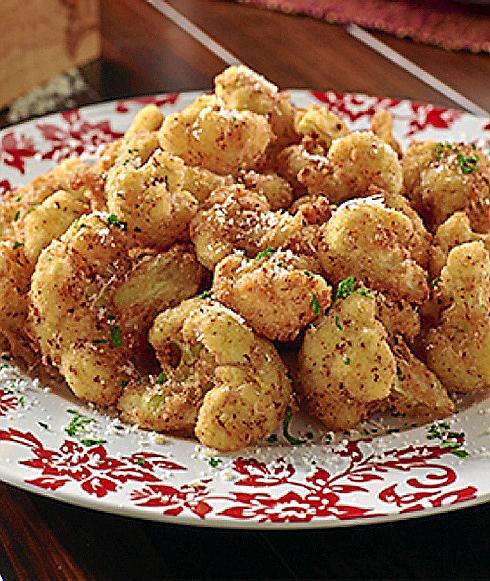 Veggie batter
Batter-fried veggies make a delightful starter for lunch at any time of the year, especially when the batter is light and crisp. Mix 250 grs of sifted flour in a bowl with four tablespoons of melted butter, two whole eggs, a good pinch of salt and enough water to make a batter that is not too thick. Let the batter rest for at least an hour before using. 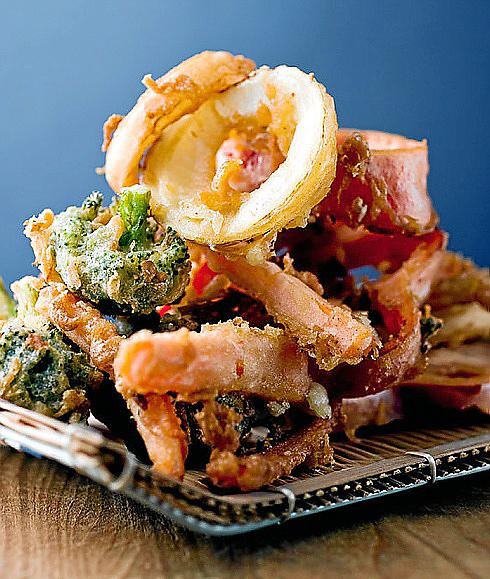 Fruit batters
If you have ever eaten Chinese fruit fritters such as those done with bananas as a dessert, you will know they can be absolutely scrummy. Sliced fruit of all kinds can be done as fritters, so there is great scope for variations. Try this batter for which you will need 250 grs sifted flour, 2 tbsps melted butter, 1 tsp salt, 150 mls lager-type beer, 250 mls warm water, 1 tbsp brandy and two egg whites. Put the flour, salt and melted butter into a biggish bowl and mix in the beer and the warm water without stirring too much. Let it stand for an hour and just before using fold in the stiffly beaten egg whites. 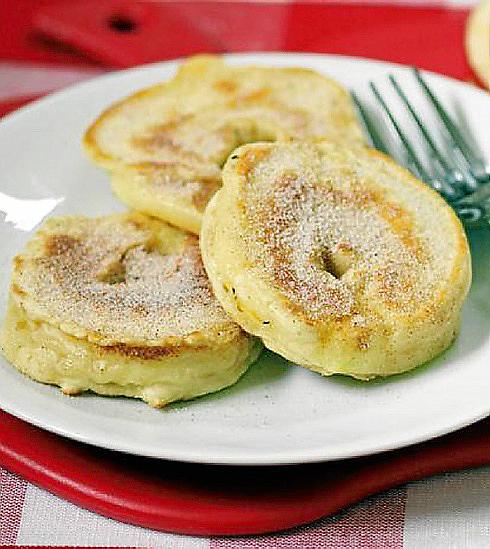 Yeast batter
One of the nice things about yeast batters is that they will at least be light, even when only a small piece of yeast is used. For this one you will need: 125 grs flour, pinch of salt, (1 heaped tsp of caster sugar ONLY when making sweet fritters), one piece of yeast the size of a hazelnut, 75 mls warm water, about 75 mls lager-type beer, 1 tbsp olive oil and the white of a small egg.

Sift the flour into a warm bowl and add sugar if using batter for sweet fritters. Dissolve yeast in warm water and leave it for 10 minutes. Make a hole in the flour and add the yeast, the oil and the warm water. Draw in the flour a little at a time.

When it has been absorbed gradually add the beer, stirring with a wooden spoon.
Beat the mixture when it reaches a creamy consistency. Depending on the flour used, a little extra water may be needed.

Let the batter stand in a warm place (on top of the cooker, next to a sunny window or near a fire) for about 45 minutes. The batter should rise a little during this time. Just before using, fold in the stiffly beaten egg white.

The successful frying of food dipped in batter calls for a good properly made batter but there are other things involved and they have to do mainly with the oil and temperatures.

The oil is very much a question of personal taste — and also where we live. People in Mediterranean countries are inclined to favour olive oil, mainly because it has always been available in abundance.

But during the economic turmoil of recent years (the latest crisis is still very much with us and if you don’t believe me, just ask any restaurant owner), Spanish housewives have been buying more sunflower seed oil because it is much cheaper.

I agree that the price difference is considerable, but I am an incorrigible olive oil man and I use the virgen extra kind for everything — even deep-frying. I prefer to make spending adjustments in other areas so that I can always enjoy the flavour of a really fine olive oil.

Chinese cooks are inclined to prefer peanut oil (which is have never seen here) but they also go for sunflower, as do Japanese cooks. But what I cannot understand is how some cooks can use these tasteless oils for salads. For me the best salads are those in which cooks use the dearest virgen extra olive oil they can afford.

But regardless of which oil you use, there is one golden rule everyone must respect: the oil must always be scrupulously clean. Most oils cannot be used for deep frying more than four times, even when they have been carefully strained after each use.

The frying of food dipped in batter calls for high temperatures and relatively short cooking times. The oil must be very hot, but not smoking. At most, when you start the first batch, it should be giving off a light haze.

The summer months are a good time for doing veggies and fruit in batter, so we’ll take a look at both next week and see how to handle them and ensure the best results.