A time to reflect and a time to connect

How has this week been for you? Have you given any thought to improving the way you listen?

After writing the article last week I found myself with an increased and sometimes uncomfortable awareness of how I listen. Though I was making a real effort to listen actively, all my good intentions were lost the minute I became excited. Instead of ‘listening intently because I was interested’, when I was interested I became even more likely to regress to ‘listening to speak’. I am not proud of this but have admitted to myself (and now publicly) that for me, improving the way I listen is ‘a life’s work’.

When we do this without a thought can it be ‘thought less?’ I think so.

Years ago as a new headteacher, at the end of my first week, a member of staff told me parents were saying that I was ‘mean’. I took this personally and felt both upset and defensive. However, as luck would have it, I asked “Why?” Her response was “Because you’ve stopped them dropping off their children in the playground at 8 o’clock each morning.”

I was being called ‘mean’ because I was putting the safety and welfare of all our pupils first? I could cope with that! .

More recently (before lockdown) at our Escola Global monthly Parents Association Strategic Meeting, I noticed that the last item on the agenda: was ‘MM appointment and caution’. I was alarmed, this felt personal. The reaction I had all those years ago at being called ‘mean’ came flooding back. I waited very impatiently until the end of our meeting to see what this meant. As it turned out the word ‘caution’ was simply a concern about having a realistic workload.

We ‘feed back’ on various levels, with children, with partners, with family and friends, and at work. Do we use fundamentally different approaches with each or is there a good way that works across the board? I can’t imagine there is a perfect way but I can accept there is a better way.

One of the main reasons we avoid giving feedback is because we are worried about the other person’s reaction. We fear they might get angry, disagree, or fall out with us. Add to that, research shows that our brains are hardwired to react to negative stimuli faster, which was necessary for our survival in days gone by.

Having regard for all the above I think that, before we give any feedback, it is a good thing to at least take a breath and think about the outcome we are hoping for. But it is important to bear in mind that we can’t control the receiver’s reaction and it may not turn out the way we expected!

However if we are honest and show real vulnerability, more times than not, we might just spark the beginning of a new and interesting way of thinking which gives way to a positive change.

Giving planned feedback is different especially if we can consider the points below.

As we have read in my recollections above, receiving any feedback can be fraught with potential problems. However here are some points for ‘receivers’ to consider: 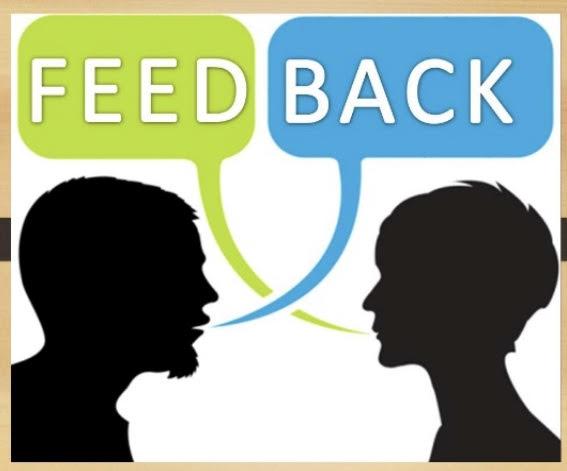 There is one more thing to add to the mix. At Escola Global we are becoming increasingly aware that, though many of our parents are fluent in at least two and often three languages, we are deeply influenced by our native culture and first language. A word that appears to easily translate into another language can sometimes have a very different meaning at a general and personal level. As an example from earlier, my interpretation of the word ‘caution’ was warning but in this case it just meant be careful.

So a word of caution! On our beautiful and quiet island, when we are giving and receiving feedback to each other, as well as having regard to the points above, let’s be extra careful with the words we choose and not become too defensive about the words we hear.

Next week it’s time to look at the very emotional, extremely interesting and highly relevant subject, how we manage change!

In the meantime I hope you keep well and stay safe.