Pollensa and the revival of the beach services' row

Pollensa town hall has once more managed to generate a row over beach services. Over the past three to four years, there has been barely a murmur about what used to be (or seemed to be) an annual event - the beach controversy. But now, in the midst of coronavirus crisis, the town hall has succeeded in reviving it.

Coronavirus does play a part. As Mayor Tomeu Cifre points out, the town hall is unlikely to recoup the 400 grand it has to pay the Costas Authority each year for organising beach services. Potential concession holders are unlikely to come forward, the mayor reckons, so there'll be no revenue from the charges levied on them with which to pay the Costas.

It's a fair point, although there is a good deal of pressure being brought to bear on Madrid to drop this payment that town halls have to make - for this year at any rate. Were this to be the case, then the mayor would have less justification for the decision not to bother with putting the concessions out to tender.

Ex-mayor Miquel Àngel March perceives matters rather differently. An erroneous request to the Costas caused a delay in the processing of the new authorisation for the beach concessions - which is needed every four years. Coronavirus or no coronavirus, the fact that the Costas hadn't in any event got back to the town hall and given authorisation was all due to town hall incompetence.

Now where we have heard this before? Precisely the same accusations about errors and delays have been made in the past, with incompetence always having been cited. When March was mayor, the situation was much the same; it was just that Cifre who was the one crying incompetence. The delay when March and Junts were in charge was attributed to the overhaul of the specifications for the beach services. Sunloungers didn't start to appear until June. The tender - by this time four years ago - had yet to be raised. "Chaos" was a word that was frequently used to describe the situation.

So, it is a familiar story, with the added factor this time that the town hall hasn't got round to sorting out the lifeguard service either, and this service - as March points out - will be additionally important this summer in ensuring that health standards on the beaches are complied with.

Meanwhile, another opposition party - the Alternativa - has suggested that much of the problem could be avoided if the town hall had direct management of beach services, which is the case in Alcudia, where the town hall doesn't have to bother with putting the services out to tender, has a clear plan for when these services will start, and has already got all personnel (plus lifeguards) in place.

Still at Pollensa town hall, and the opposition is again demanding that salaries for the mayor and executive councillors are reduced as a response to the coronavirus crisis. There is now a further suggestion that town hall funds for all political groups are also cut. The savings would be used for urgent social needs.

The handling of the crisis by the Tots-led administration is coming in for increasing criticism from the opposition, who point to examples elsewhere in Majorca - e.g. Calvia - where ruling administrations (and especially mayors) have been in constant touch with all political parties in keeping them informed and also in working on unified and consensual approaches to dealing with the impact of the virus. In Pollensa, the opposition parties maintain, this has not happened.

And there is also criticism of the fact that the 2020 budget, which has been initially approved, has not been published on the town hall website. The only way that citizens can get to consult the budget document is by physically going to the town hall. As mobility hasn't exactly been encouraged, there is some difficulty with doing this.

The Balearic Environment Commission has issued an unfavourable report in respect of the Alcudiamar project to increase the dry dock area.

The original plan had been for a doubling in size of the dry dock from the existing 12,000 square metres to 24,000. This was recently reduced to 10,000 more square metres, while the amount of dredging required was cut massively. However, these modifications have not satisfied the commission, which maintains that the expansion will have an adverse effect on sandbanks, posidonia and the shallow bay.

Moreover, the commission believes that the expansion, which would allow for longer boats, will increase marine traffic, potentially lead to spills in the sea and have an impact on wildlife because of greater noise and light. The area is classified as a ZEPA zone for the protection of birds. On top of this, the commission goes on, suspended solids will be produced by the construction and sediment will affect the seabed and the posidonia meadows.

Local pressure group Salvem el Moll has welcomed the commission's findings, as has the town hall. Mayor Barbara Rebassa says that the town hall had its own reports advising against the expansion and that concerns were forwarded to the commission.

The project has generated controversy ever since it was first announced. Alcudiamar has insisted that it has taken environmental considerations into account for a development that was a key investment element as part of the deal with the Balearic Ports Authority to extend its concession to 2030. 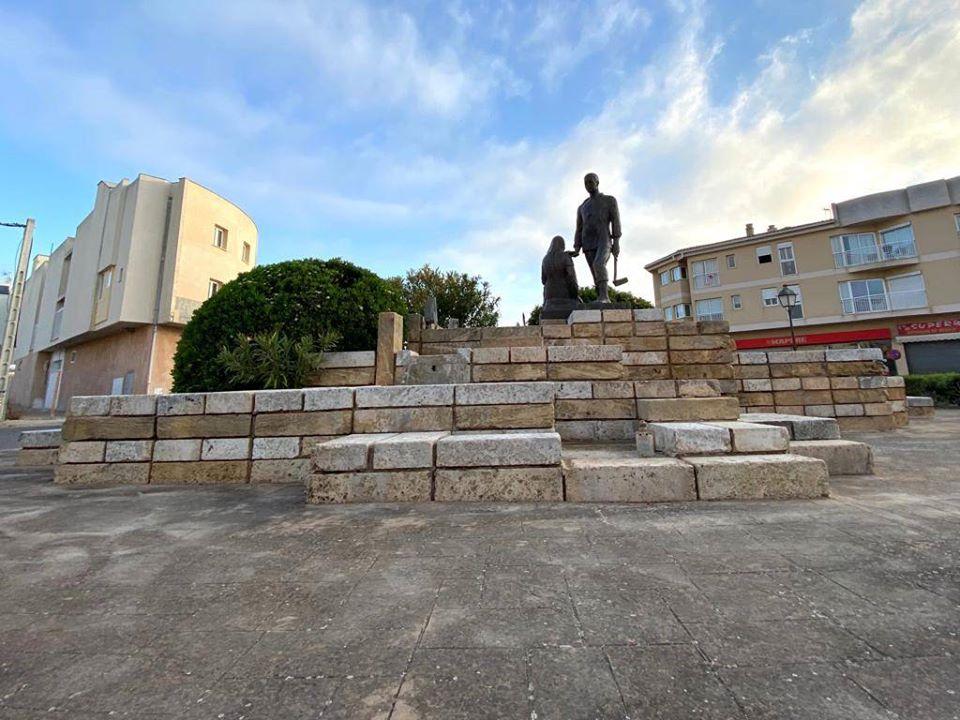 In Sa Pobla, there is the emblematic statue of the farmer and the farmer's wife. Its title is Monumento al pagès i a la pagesa de ses marjals and was the work of Palma-born sculptor Remigia Caubet González in 1970.

The town hall has undertaken a deep clean of the statue, and the couple - says the town hall - "look like never before". Well, except back in 1970 perhaps.