Is it hot enough for you? Plus - cloudy swimming pools and wasps!

People cooling off in the pool. | Antoni Pol

Today I will mostly be complaining about how hot it has been, even though these past two days we have been spared some of the worst excesses of a Majorcan summer. Before I start in earnest, I have to say that my son would find this whole business totally hilarious, as he would take the view that moaning about the heat in Majorca in July/August would be rather akin to complaining that it is was a bit chilly at the North Pole in December! Anyway, ignoring all that, as I’ve spent the past four years of late July and August in the United Kingdom, temperatures of 38oC are quite a bit removed from a blustery 18ºC on a Cornish beach with the grandkids. However, I do find it funny and a little strange that ex-pats based on the island find it necessary to take photos of their garden temperature gauges and post them online to convince us as to just how hot it is - yes, we know. Personally, I find the language used to describe the extreme heat, sometimes a little extreme and often hilarious.

Why is it always “stinking hot”? Indeed, why does a person have to proclaim that he is - “sweating cobs” or - one of my recent favourites - “sweating like a big girl in a cake shop”? Then there is the whole business of how extreme heat can change a persons personality. I am usually a calm, cool - and some would say a rather sophisticated man in his middle years(!) but during a heatwave I can turn into a vile, bad-tempered V sign waving maniac if you should ever nip in front of me in Mercadona’s carpark. Happily, we have air-conditioning at our place, so although I often complain bitterly, I can usually get to sleep at some juncture. However, I’m assured that like many other people, I have a distressing habit of going through my nights sleep - either con or sin air-con (if you see what I mean?) as if anybody is actually interested in how much I perspired last night between midnight and 4am. I have always wondered if it’s a British ‘thing’ as it seems that Spanish friends ignore it and Germans seem to want to lay in it all day long gently frying. The truth of it is - we Brits are obsessed by the weather - any type of weather and so when it gets really, really, hot - we can all purse our lips and shake our heads in outrage at the indignity of it all. As my son would have it - we’d do the same thing freezing in frost and snow at the North Pole in December - now wouldn’t we?

POOL WATER WOES!
As I am on the subject of extreme heat, can I share with you a deep concern that has been building-up in my mind over the past week or so? We have in our garden a compact and bijou swimming pool and during this recent heatwave I am having to constantly top up the pool because of evaporation - and even worse, it’s gone all cloudy. This may seem like a typically laughable ‘First World’ problem, but I assure you this is serious. As I have to buy my water via a 6 tonne truck and I am having to constantly back-wash, this is both annoying and very expensive. Indeed, I was reminded of the time that our two girls were teenagers and water trucks were parked up our lane in convoy if they should have a ‘date’ when holidaying with us. Many a time I was to be found banging on a bathroom door imploring them to stop wasting “My water.” Moreover, the youngest one still holds the world record for the number of showers in one day; I think it was eight and my knuckles are still scarred from my efforts to stop her. Anyway, back to my cloudy pool. It seems apart from the addition of expensive chemicals, I am to keep the filters on constantly - but alas, my electric meter gauge thingy is spinning like buggery and I could be bankrupt by the time we get to October. I’m thinking of renting it out. 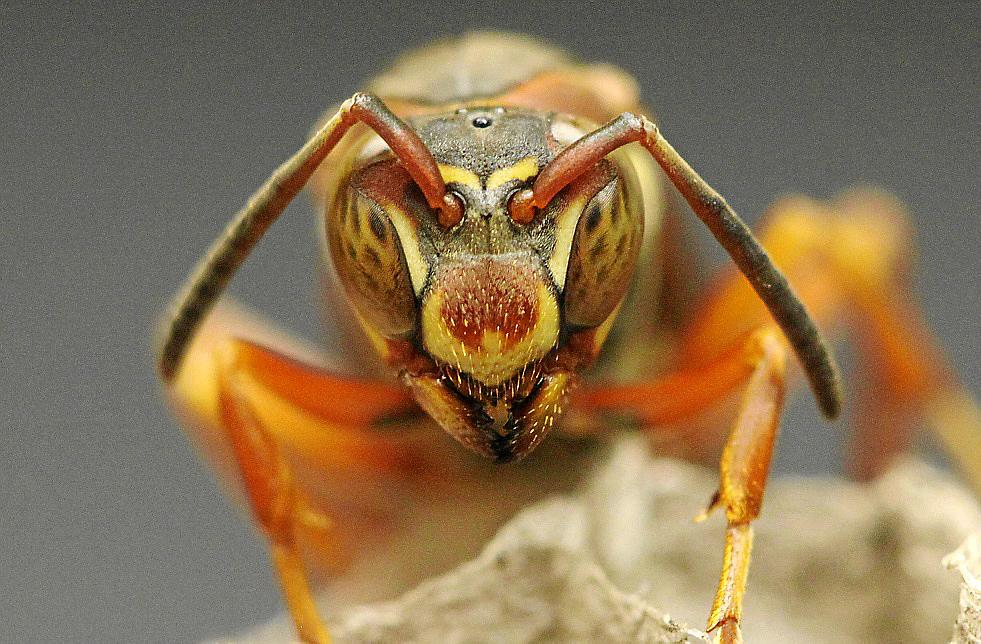 BUZZ OFF WASPS
Although I really don’t want to share my summertime woes with you - I will anyway. It seems that quite a few people have been having the same problem as us during the recent heatwave. The problem is Wasps - or, as my old west-country mucker would say - “Waaaasssppps!” Where do they come from and how do you get rid of them? We have checked on social media if anyone has the same problem - and it seems that wasps in a heatwave are a real menace. It seems that they like to gather in air-conditioning units, random corners of the house and various nooks & crannies for no obvious reason. That’s not true, because I was told that they are usually seeking moisture or water - but, I’m not so sure. Generally, I think that they are just out to get me. That being said, we have taken to placing various herbs in certain places to halt them - something we learned via social media on a very helpful self-help site. Apparently, the wasps will slowly disappear as the weather cools, but it is quite an unexpected phenomenon for many of us.

MIXED MESSAGES
And finally! Is it me, or is there an awful lot of either ‘mixed messaging’ or downright untruths doing the rounds at the moment as we get near to deadline time in terms of ‘Residency’? I say ‘deadline’ but even that seems to be the subject of debate. Unfortunately, most information that is put ‘out there’ is much the same, save for a key element that is different from other notifications official or non official. As a long time formal resident of the island, it is confusing even for me and I have refused on many occasions to add my own five pennies worth of confusion to an already overcrowded field. Even the MDB’s recent foray into residency clarification, was almost immediately contradicted by many other sources. We need certainty on this subject - and quickly.