The perfect little squid were worth a 10. | Andrew Valente

Ever since restaurants started to reopen after the virus confinement period, I have mainly been revisiting old favourites to see how they are faring after some three months of enforced closure.

Everyone has been very positive, even offering their old regulars some nice bargains. The Japanese Quinta Avenida dropped the price of their menú del día by €3 (to €14.90) without cutting corners and Casa Gallega included fillet steak and suprêmes of John Dory on their €15.50 menu.

El Viejo y el Mar, the best value-for-money Galician place I know of, has been worse hit than others. The dining room is small and to maintain their amazing low prices they need to pack in the customers — which they did for lunch and dinner five days a week.

But with the new post-virus seating regulations they’re now limited to 21 diners. They also have no bar service and for the moment are open only for lunch. They are trying to squeeze in two sittings, the first one from 12.30pm to 2.15pm. That means you can have an early lunch which is sometimes very suitable.

The dishes are exactly the same as before and one gets extremely generous helpings of classic Galician regional plates, with everything very nicely cooked.

The meal got off to an incredible start with a dish I’ve never had before at this restaurant: small squid known as chipirones that were grilled and then presented as in the picture: the chipirones round the edge of the plate and their chopped tentacles piled in the centre atop slices of delicious Galician potatoes.

This dish was sheer perfection in every way: even the slices of boiled potatoes, which are grown in Galicia, were impeccable. And look at the price — €10.50 makes this dish an absolute bargain. Little wonder I awarded it a 10-rating.

These chipirones, which are caught mainly in the north, are at their best in July and August so now is the time to have them — before they grow and become ordinary calamares. Not that there’s anything wrong with ordinary calamares.

We also ordered rabas de calamar because they are always so delicious.They are strips of the flesh of a calamar de pota, a large one that measures some 60cms in length. Being such large members of the calamar family you wouldn’t be surprise if their flesh was a bit tough, but it’s always butter soft.

Rabas are a speciality in Cantabria. They come in longish strips and the best way to eat them is with your fingers, nibbling off little bits between swigs of whatever you are drinking. The portion is so large it could be shared between four as a starter.

I wouldn’t like the little task of naming Palma’s 10 best restaurants (there are so many excellent places it would be impossible to select only 10) but if I had to do it El Viejo y el Mar would most definitely be there. The tavern ambience is delightful, the Galician dishes are authentic (with fish, shellfish and other products coming from Galicia), cooking standards are extremely high and it is one of only two places at which I have never had a disappointing dish — the other being La Bottega di Michele in Calle Fábrica. Add to that generous portions, amazingly low prices and a surprising number of dishes that have had a 10-rating and it’s easy to see why this place is so popular. As they cannot extend the premises in any way, they have now opened two other nearby restaurants. I’ll be visiting them very soon.

Taberna Gallega El Viejo y el Mar, Calle Aragón 86, Palma. Open from Tuesday to Saturday for lunch only for the moment. They aim to do two sittings, the first one being from, 12.30pm to 2.15pm. We didn’t know that and booked for 1.30pm and left at 3.15pm. Don’t go without a booking: every chair was reserved when I arrived at 1.10pm. Their very short menu has aways been on two black boards and their few Galician wines and prices are on another board beside the bar. On arrival, a waitress took our temperature with a laser device. 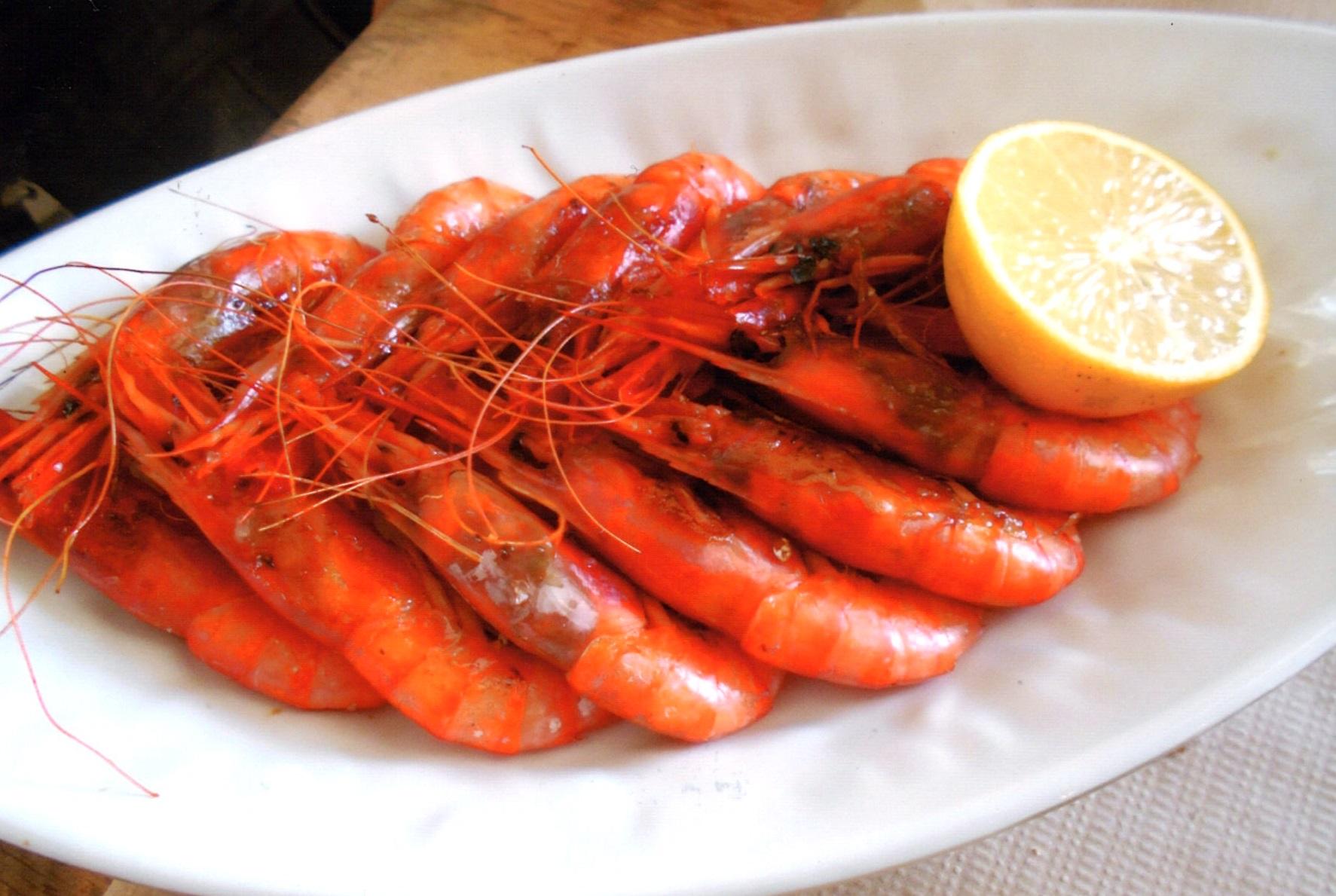 Basically there are two kinds of gambas in restaurants: the fresh ones and the frozen ones. The fresh are always expensive because they’re dear at the market. Most restaurant diners, including connoisseur gourmets, think frozen gambas are simply not worth bothering about.

Yet among the most memorable gambas a la plancha I have ever eaten were frozen ones done by Basque cook Fernando Yarza at his Baserri restaurant.

Fernando did a radio programme on cooking that had a strong humorous content. When he told me the gambas we had just eaten were frozen, I thought this was Fernando the jokester talking. I can tell when gambas are frozen…and Fernando’s were fresh.

Well, he eventually convinced me they were frozen, but were expensive ones that were slowly defrosted and then cooked over a high heat for a short time. It was the only time I had failed to spot frozen gambas.

I can usually identify frozen gambas just by looking at them — it’s the lively pink colour of the shells that is the first (and most reliable) sign that the gambas are fresh. If the flesh is sticking to the shell when you start to eat them, they are almost certainly frozen.

The last time I had gambas at El Viejo y el Mar was with friends Carolyn and Maggie on a Nordic walking visit from Winchester. On that occasion they were very fresh and absolutely scrummy.

But last week the dark reddish colour was enough to tell us they were frozen — but they were the expensive frozen gambas, they were expertly grilled, the flesh separated easily from the shell and they were delicious, just right for a summer’s day.

I discovered something on this visit. I never drizzle lemon juice over dishes like gambas or calamares because the juice is all-invasive and you taste little else. But by puncturing the flesh of half a lemon with a fork you can then rub a gamba or a piece of calamar on the surface and pick up a mere film of juice that gives a lovely tangy touch.