This week we finally got the restaurant up and running again and to be honest, it’s such a relief to finally open our doors and welcome back our guests after all the trails and tribulations of the last few months. It’s also a great feeling to be with our fantastic team again and to see them happy and motivated to finally return to work and do what they do best…cooking great food and giving warm Mediterranean hospitality in our cool, stylish oasis in the heart of the city.

I’m also really looking forward to cook with some of my favourite summer ingredients and as I wondered around the market again this week, all the fresh fruit looked really awesome and for a cook, the selection was truly inspiring. With luscious strawberries, stunning looking cherries, thirst quenching melons, the season’s first figs coming into season, along with apricots, nectarines and succulent peaches, but in the end I opted for a large bag of plums to take home.

There are few fruits that come in such a panorama of shapes, sizes and colours and I really think sweet-sour, aromatic plums, bursting with flavour are a very underrated ingredient. Plums are actually low-calorie fruits and do not cause unhealthy spikes in your blood sugar levels. They are a healthy way to satisfy your hunger because they contain high levels of vitamin C, which fortifies the body’s defences against infection and increases the amount of energy-giving iron that we absorb from food. They also provide delicious eating and can be used in so many different and interesting ways. They can be poached in sugar syrup with honey, cinnamon, vanilla and cloves or roasted and caramelised with brown sugar, almonds. Spoon over thick Greek yoghurt or vanilla ice cream or serve with a creamy panna cotta. At the restaurant this week we are serving a selection of fresh plums with our foie gras terrine, but for a simply lunch, try sliced plums with Serrano ham and some soft goat’s cheese crumbled over the top with a few dressed rocket leaves. Absolutely delicious!

Roast pork is also amazingly good with glazed plums and a chunky, sweet and sour plum chutney can really liven up cold meats, pâté and salads during the winter months, but I do think duck and plums are one of my favourite combos as they were simply made to go together. I especially adore Chinese style plum sauce when it is flavoured with five spice powder, star anise, Szechuan peppercorns, fennel seeds and a cinnamon stick…it is just about the most perfect marriage anywhere!

Season the duck breasts with the salt, pepper and five-spice powder. Fry the duck in a large frying pan, skin-side down on high for 1-2 minutes until crisp and golden. Turn over the duck breasts and place them on a baking tray. 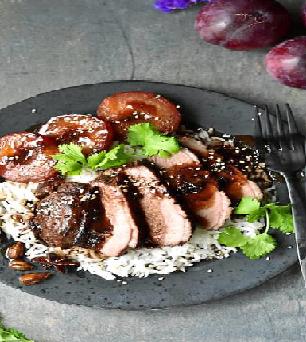 Roast them in a hot oven (200ºc/gas6) for about 6-8 minutes until just cooked and pink in the middle. Remove from the oven and rest in a warm place for 3-5 minutes.

For the plum sauce:

Cook the plums and ginger over a gentle heat for 2-3 minutes. Add the honey, soy sauce, cinnamon stick, star anise and lime juice.

Cook for 5 minutes, stirring occasionally, until juicy and softened. Remove the cinnamon & star anise; then blend to a smooth puree.

Slice the duck breasts and serve with the plum sauce and steamed pak choy.

Beat the yolks, whole eggs and the sugar until it begins to thicken. Add the corn flour and sherry. Mix well.

Bring the cream and mint leaves to a boil. Pass through a sieve.

Add the cream to the egg mixture.

Arrange the plums in a shallow ovenproof dish. Pour the mixture on top and sprinkle with the sliced almonds. Bake in a 180 degree oven for 15 minutes, until the mixture is just set.
Dust with icing sugar and serve with vanilla ice cream. 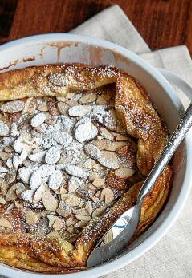