Sweet and sour and so superior

My first Chinese meal was in Edinburgh in the neat and clean university area of the city and during the Festival. I was 13 at the time and most receptive to anything that was new, so I fell in love with the sweet and sour pork served atop plain white rice. A Danish visitor, seated at our communal table (this was the university area, remember) had recommended it. It was bursting with unfamiliar and most attractive taste sensations and I was hooked.

But when Chinese restaurants started to become popular in Palma in 1968 they were soon serving an ersatz version that became a total cliché. I went off sweet and sour pork and stopped ordering it.

In the new eating-out post-virus normality, when printed menus are a hygiene no-no, I was looking at Hemudu’s menu posted on the window when a waiter came out and handed me their take home version, folded up into a small brochure. I took it home and had a long look at it. 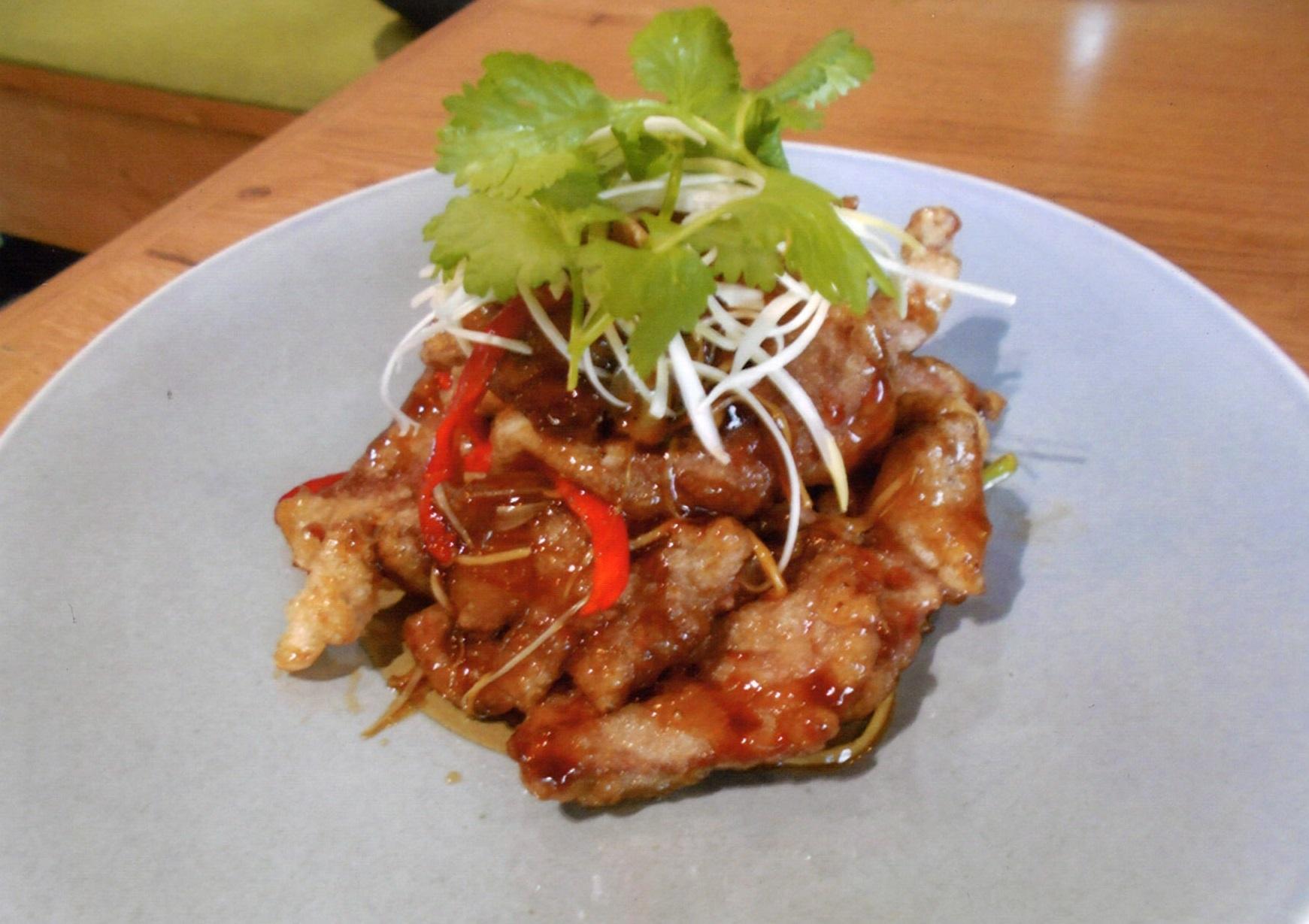 I soon noticed they have a sweet and sour pork dish and as Hemudu is one of Palma’s finest Chinese restaurants I knew it wouldn’t be a cliché version. So after booking a table the following week, I turned up knowing exactly what I was going to order — and one of the dishes was their sweet and sour pork. They do it with an Andalusian cut called ‘secreto’ — that was already a good sign because this is one of more than half a dozen special cuts that are always most tender and full of flavour.

Pork is often a notoriously dry meat no matter which method you use for cooking it. But these special Andalusian cuts are always succulent. That’s because they are butchered in a way that leaves the meat streaked with thin veins of fat. It’s the fat in meat that provides the flavour and helps to keep the tissues juicy and tasty.

I expected this version of sweet and sour pork to be very much to my liking, but even so I was surprised at how memorable it was. They didn’t skimp on the slices of meat and they served a most generous portion, so the €9.50 price was a good one.

But the cook’s best decision was cutting the meat in thickish slices — it was that more than anything else that made this dish so successful. And it’s easy to see why.

Thin slices of meat wouldn’t have given the veins of fat such an up-front presence: this meat’s superior rich succulence would have been missing. It was by far the finest sweet and sour pork I have ever had and it was worth a 10.

Hemudu is one of Palma’s finest and most interesting restaurants. They use high quality products, cooking standards are high and that always makes a huge difference. On the whole prices are in the medium range except for those dishes made with the finest fish, shellfish and meats. Their sweet and sour pork, done with the Andalusian cut called ‘secreto’, was superb, the best pork dish of its kind I have ever had and it was worth a 10. The chicken dish lacked juiciness because it was made with the breast, but the coating of slivers of deeply fried almonds gave it marvellous contrasts of crunchy textures. Another memorable dish. The gambas in a menú del día dish were terse and tasty and the spring rolls were crunchy and delicious.

Restaurante Hemudu, Carrer Rubén Dario 1, Palma (at the end of Calle Bonaire, off Avda Jaime III). Tel:971-327902. Open every day or lunch and dinner: 12.30pm-4pm and 7.30pm-10.30pm. This is one of the few restaurants where you can have an early lunch. They do a 13.80 € menú del día from Monday to Friday. Because of the new post-virus rules, table capacity has been reduced and it’s a good idea to book, even for lunch on weekdays.

Our other mains was something I have never seen in a Chinese restaurant — or any other place. It was a slice of chicken breast coated with a thin batter and then dipped in slivers of almonds.

When it was deep-fried the almonds slivers stuck to the slice of meat like scales on a fishand were beautifully brittle. 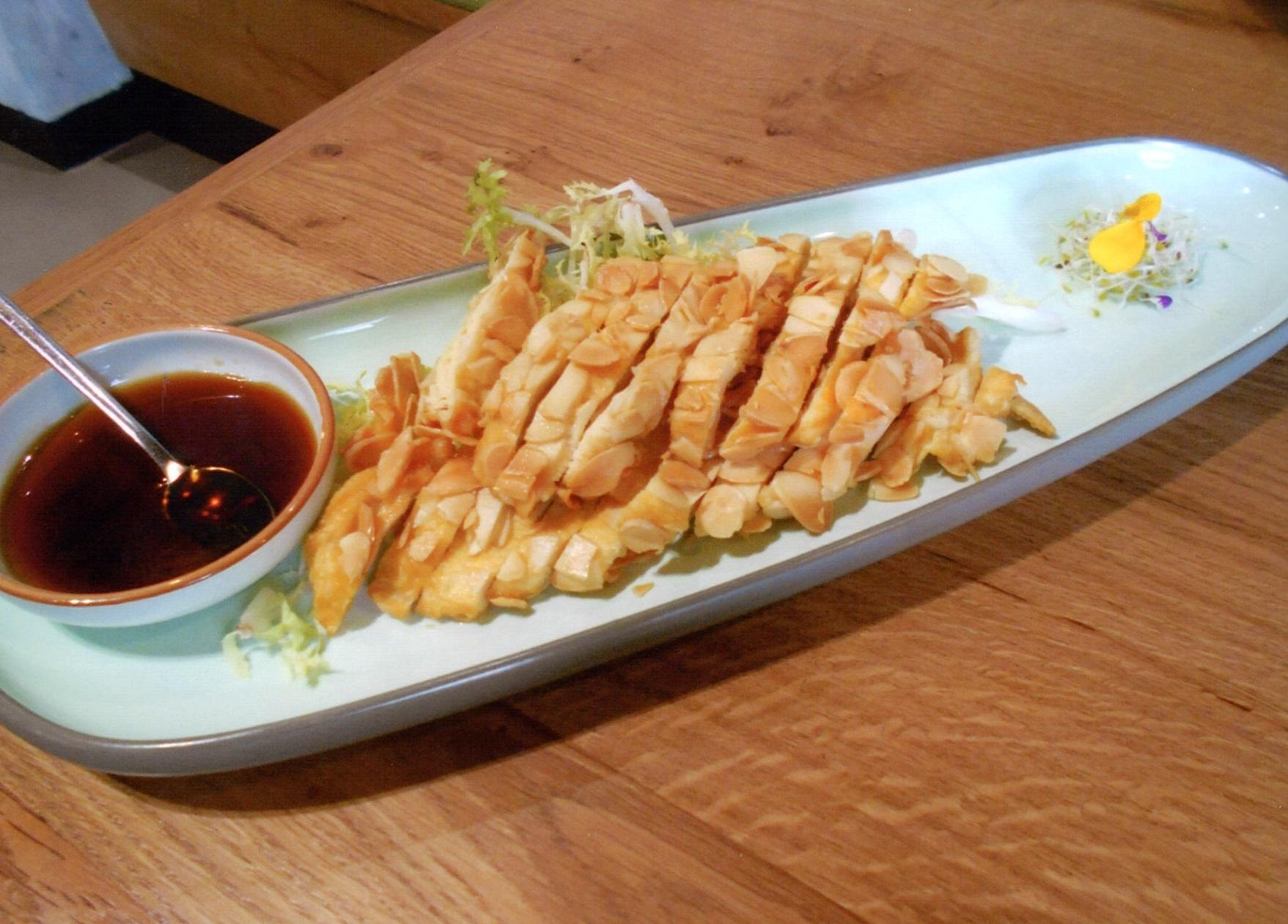 The cook sliced it up into thin strips easily picked up with chopsticks: I used my fingers as I always do with deep-fried food cut into manageable pieces. A crunchy marvel.

Called simply crispy chicken with almonds, this dish sounded as if it would be a run-of-the-mill stir-fry. But what we got was a deep-frying tour de force that was on its way to a 10, but didn’t get it because chicken breast isn’t succulent enough. They should consider doing it with the juicier meat from the thigh.

When Hemudu reopened after the confinement period they changed their menú del día: the current one is less elaborate and now costs €13.80 instead of €18.50. I think that was a wise move.

Although I thought the €18.50 menú was quite superb and a total bargain at that price, there aren’t all that many people who want to pay so much for lunch — except, perhaps, once in a while.

The €13.80 menú is shorter and much more suitable in every way — and the best news of all is that they haven’t made any cuts in quality. It is still great value for money.

We had the crunchiest spring rolls ever: four square packets made with an incredibly brittle wrap stuffed with shredded veggies. A fried noodles dish was up to à la carte standard and it even had a few deveined small gambas. And our main course of stir-fried gambas with al dente veggies came with bigger gambas, tersely cooked and also nicely deveined.