Garlic purée is so mellow

Garlic is used in many dishes. | Archives

It wasn’t all that long ago that the average Briton couldn’t stand the smell or taste of garlic. Readers used to write letters to the editor complaining about garlic and asking why it was included in so many recipes. It didn’t occur to them that they could omit the garlic from their version of the dish. But many Britons got round to trying garlic and a surprising number ended up liking it. The country now has a National Garlic Day (every April) which helps to promote the pungent bulb even further.

Garlic’s eventual popularity was helped by the fact that its medicinal properties have been loudly lauded for more than 5,000 years. There aren’t many people today who haven’t heard of its almost magical preventive and curative qualities. 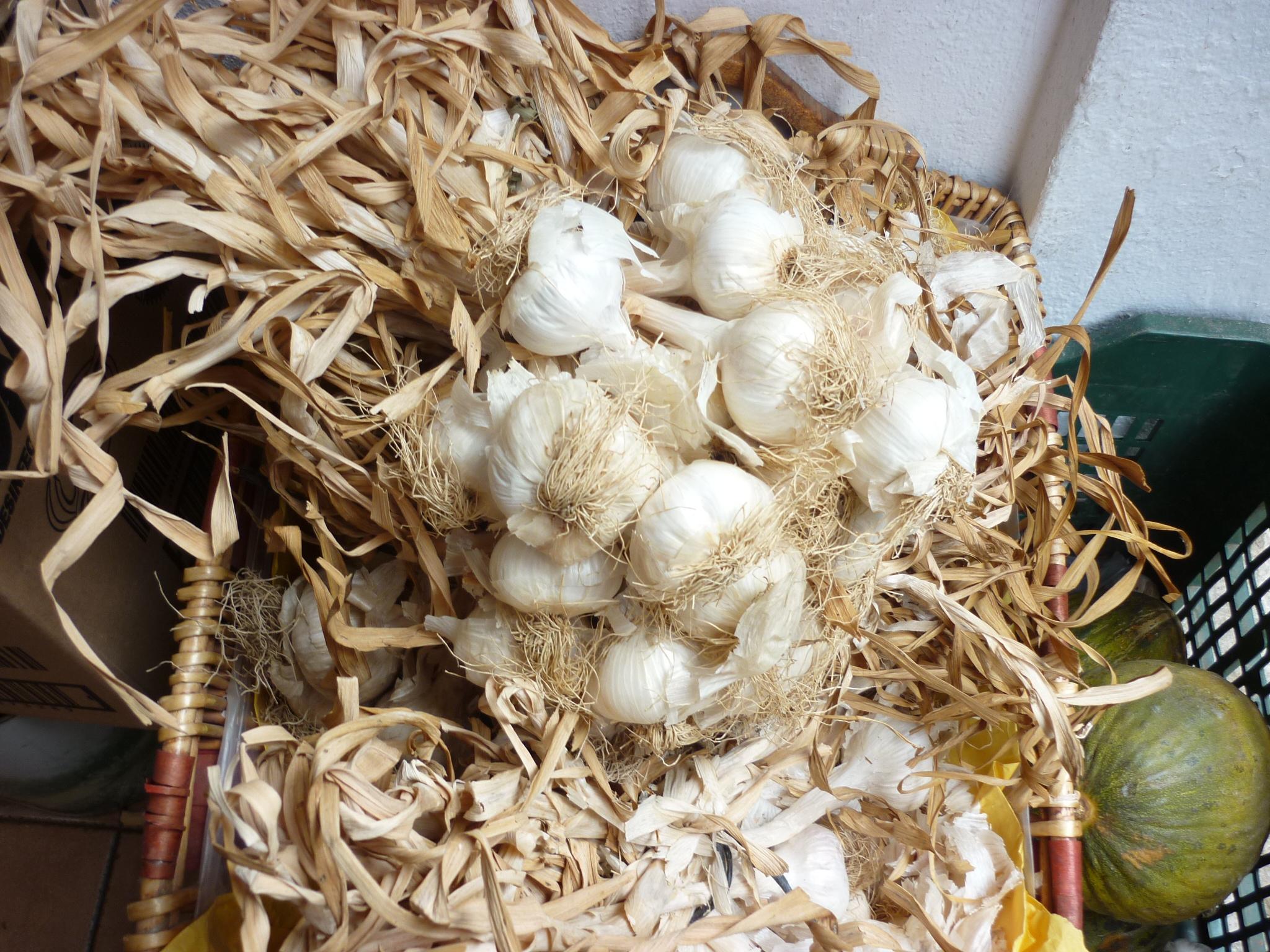 I grew up in a half-Italian home in Glasgow where garlic was always used as flavouring. That was long before the average Briton got round to trying it. In my family we were forever hearing that garlic was good for us because, amongst other things, it cleansed the blood.
That sounded like an old wife’s tale to me, even when I was only eight or so. I couldn’t see how garlic could go through our bloodstream and clean it up.

But researchers a long time ago showed (but haven’t conclusively proven) that garlic helps to keep blood cholesterol at low levels. It is thought that garlic washes off cholesterol plaque sticking to artery walls. I have been eating garlic since early childhood and my cholesterol count has always been below 165.

When garlic is well cooked it loses some of its strong taste (but none of it medicinal properties) and becomes so mellow its exquisite perfume and flavour are very much in the background. 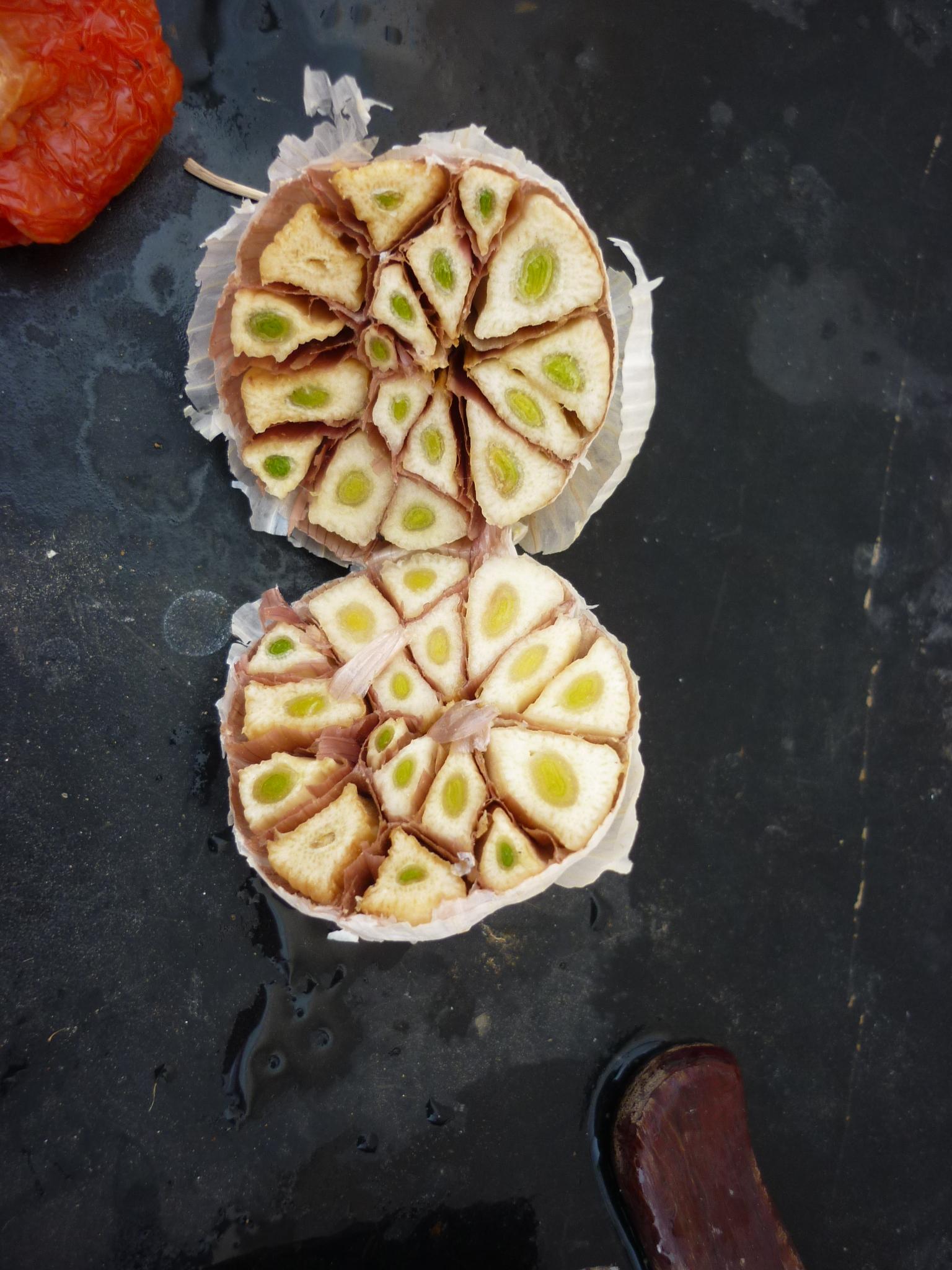 This is the case with garlic purée: garlic cooked until very soft and sieved. It loses the pungency that is its hallmark when raw and becomes so mellifluous it can be spread on toast for breakfast.

You can buy puréed garlic in handy tubes, but like all similar products made on an industrial scale, it won’t be a good as the purée you make at home: doing your own is much more satisfying and also cheaper. It keeps well and can be made in biggish amounts. And making it is child’s play: all you need are 20 large heads of garlic and some olive oil.
It is essential to buy your garlic at supermarkets where you can look through the bulbs and select only those that are very firm. You can’t do that at municipal markets, because stallholders enforce a strict ruling that customers aren’t allowed to serve themselves. They impose that rule because if an inspector sees a customer selecting fruit or veg it’s the stallholder who gets fined, not the customer.

When looking over the heads of garlic, reject those that have soft or blemished cloves, or which aren’t completely encased in their white unbroken parchment-like outer skins. Put the 20 heads of garlic on a large sheet of tinfoil, wrap them up tightly and bake them in a hot oven for an hour.

Take them out of the oven, unwrap them and when the heads are cool enough to handle, pull away the outer layers of skin and separate the cloves. Do this carefully so that you don’t split the skins on the individual cloves.

Put a wire sieve over a soup bowl and squeeze the cloves of garlic into it. Do them one at a time, squeezing the cloves between thumb and forefinger, forcing the soft garlic flesh through the root end of the clove. This sounds like a long chore but it can be done very quickly.

When the sieve is half full, pass the garlic pulp through the mesh with a wooden spoon — or, better still, a small wooden or porcelain pestle. Repeat until all the cloves are emptied. Season the purée with salt to taste and stir in 2-4 tablespoons of virgen extra olive oil.
Transfer the purée to ramekins or similar small containers, level the surface with a small spoon and carefully pour over olive oil until the surface is well covered. Cover with clingfilm or tinfoil and store in the fridge.

It makes economic sense, especially in these times of financial crisis, to roast the heads of garlic when the oven is being used for another dish, such as a leg of lamb or stuffed chicken. It’s also more economical to make the purée with more than 20 heads of garlic, but start with that number and see how it goes.

The purée doesn’t have a strong taste of garlic because the high hour-long heat tames the bulb’s aggressiveness, leaving just the essence of the flavour. 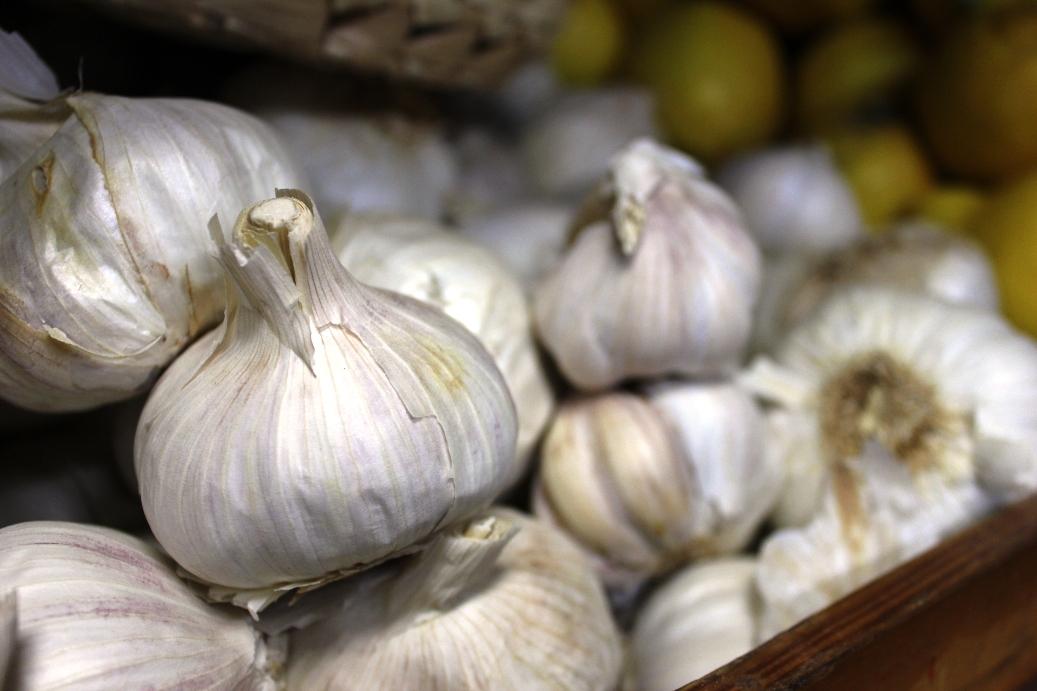 Garlic purée has interesting uses and can help to turn quite ordinary dishes into something special. You can use it to add extra flavour to other purées or mashed vegetables. Try stirring a good tablespoon of garlic purée into a bowl of mashed potatoes. It also enhances baked or boiled potatoes as well as adding loads of taste to broccoli or cauliflower.

Mashed celeriac with garlic purée makes a delish side dish for grilled or roast meats and it perks up mashed parsnips and turnips. If you are doing roast lamb, beef or pork you can make an extra special gravy by stirring garlic purée into the pan juices.

A well-reduced and highly concentrated fish fumet, carefully bound with garlic purée, makes a superb sauce for steamed, grilled or baked white fish, as well as a dip for boiled gambas or langostinos.

The purée adds a memorable soft garlic flavour to vinaigrettes, giving the dressing a lovely silken texture that will even temper aggressive vinegars.

You can also stir the purée into soups and a wide variety of rice dishes. It is especially good when mixed into risotto two minutes before serving it. On snippets of toast or toasted pita bread, it makes an appetising nibble with a glass of sherry or other pre-prandial drink. One of the best uses for this purée is as a spread on slices of Majorcan country bread (pa pagès or pan moreno) toasted over charcoal. Served with Majorcan black panssides olives and a glass of red wine, it makes a delicious mid-morning or afternoon snack.
There are many ways of using garlic in cooking, ranging from the whole unpeeled head, whole peeled and unpeeled cloves, thickly and tiny sliced cloves, or pounded to a paste. Each method gives different results because in each case the chemical breakdown is quite distinct.

Garlic gets its flavour from the sulphurous substances it contains, as do other members of the Alliaceae family such as onions, chives and leeks. When garlic is cut it produces a breakdown chemical called diallyl disulphide, which gives it’s special odour. Cooks have known this since ancient times, although they weren’t aware of the actual chemistry involved.

Cooks also realised very early on that when garlic is sliced or chopped finely it will taste stronger — that’s because of the greater amount of diallyl disulphide that is created.
In a dish that will be cooking for a long time, such as a lentil stew or other casserole, Spanish cooks often add a whole and unpeeled head of garlic. As each clove is snug in its tight inner skin as well as several layers of outer skin, the head of garlic releases its aromas and flavours throughout the cooking time. 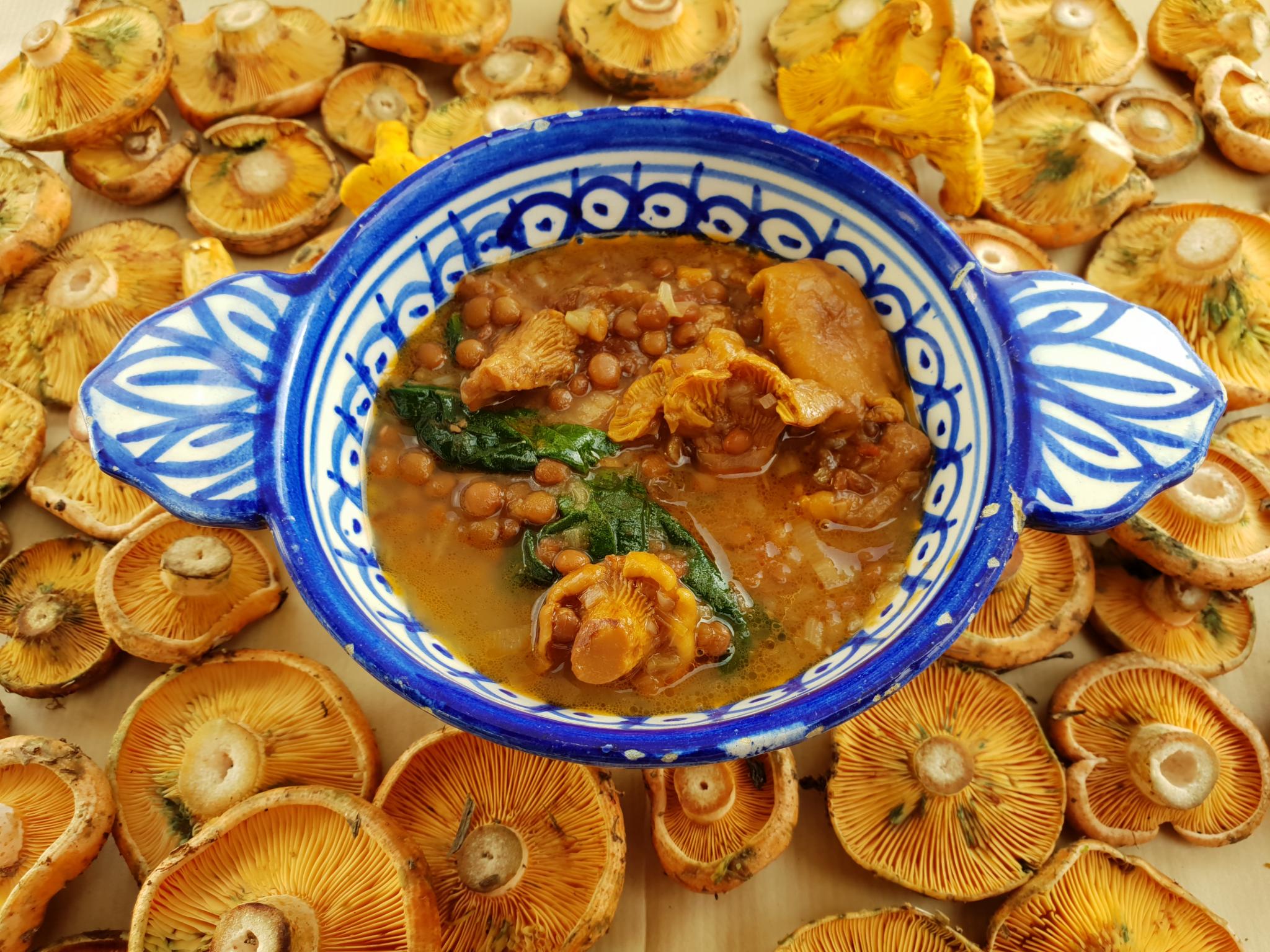 When Spanish cooks want to give a dish a slight garlic flavour, they sauté a couple of whole peeled cloves of garlic until golden and then they discard them before continuing.
If a stronger flavour is called for, the whole peeled cloves are crushed with the back of a knife (or simply with a blow from a closed fist), thus releasing some of the diallyl disulphide. The crushed clove, when golden, is sometimes discarded or is left to cook with the other ingredients.

If still more flavour is required, the garlic is thinly sliced and it cooks with the other ingredients. For even stronger results the garlic is finely chopped, as when it is added to a sofrito, the basis (along with onions, tomatoes and other condiments) of many a soup, stew or casserole.

If the cook wants a mellow aroma and flavour, the garlic is added at the start because the cooking time will temper the garlic. But when the cook wants a heady concoction of aromas and flavours, the finely chopped garlic is added five minutes or so before the dish is served.
And when a final explosion of garlic pungency is called for, the raw garlic is pounded to a paste (thus releasing maximum diallyl disulphide) and added (with other flavourings) a few minutes before the dish is served. The heat helps to release the garlic’s flavour but doesn’t temper it very much.

When frying garlic in oil on its own, you will avoid culinary pitfalls if you learn a couple of golden rules. Garlic burns very quickly so the oil must never be very hot when finely chopped cloves are added. The heat can be increased when other ingredients are stirred in.
Th frying must be over a lowish heat and it must be stopped as soon as the garlic turns golden. From that moment the garlic can change to a dark brown colour in an eye blink. Some cooks accept this dark colour but I prefer not to use it because it already has a somewhat bitter taste. If you actually burn the garlic then you must bin it and start again. Burnt garlic has an acrid taste that will spoil a dish.

In the preparation of a sofrito, or on any other occasion when onions and garlic are cooked together, they must be done separately. Onions take much longer to cook and if the garlic were added at the same time it would reach the crucial golden stage long before the onions were even half done.

If garlic burns when being fried with onions then you must ditch everything and start again. So fry them separately and you’ll avoid the risk of a mini culinary disaster.

If you want a really strong fix of garlic, a quick and most efficient way is to serve it with spaghetti, fettuccine or some other long pasta. Finely chop the amount of garlic you are using and have it ready. When the pasta is cooked al dente, drain it. In a frying pan big enough to take the pasta, sauté the garlic over a moderate heat in virgen extra olive oil.
Sizzle it for no longer than a minute and then add the drained pasta. Turn the heat up and vigorously toss the pasta and the garlic until well mixed. Serve immediately.

Garlic freaks add nothing else, not even parmesan. But you may want to stir in some finely chopped parsley or fresh basil when in season. Some Italians like to mix in fresh breadcrumbs sautéed to a nice golden colour.

For best results you must use a good amount of oil. Butter also produces excellent results. But the important thing is that intense flavour of garlic. If you’re worried about garlic breath, chew a couple of sprigs of parsley afterwards — including the stalks.