Golden oldies are doing a comeback

Scotch eggs in the past often had a bad press because they were tasteless and heavy — sometimes more like rubber ammo for riot police rifles than a delectable bar snack. But there is so much competition in the bar and restaurant trade these days that practical cooks have been taking extra care with the old favourites.

The result has been a revival of customer interest in some of the pub food classics of yesteryear, including Scotch eggs, croquettes and Welsh rarebit.

Although I was born in Scotland and lived there until I was 20, I never came across Scotch eggs — either in my home, friends’ homes, bars or restaurants. When I lived in England before coming to Mallorca, Scotch eggs were never part of the extensive range of pub food that was available in those days.

My first encounter with Scotch eggs was in cookbooks and I didn’t actually taste one until some time after arriving in Mallorca — and I was more than a little disappointed. They were encased in the traditional sausage meat, breaded, deep-fried…and served cold. Anything that has a breadcrumb coating and is deep-fried must come to the table straight from the fryer. If not, then I don’t want to know about it.

But Scotch eggs that have been freshly made and arrive in a straight line from the deep-fryer are a gastronomic delight — if the cook knows how to make them. It’s relatively easy to make Scotch eggs, but they do call for top quality sausage meat, oil at the right high temperature and a crisp breadcrumb coating. 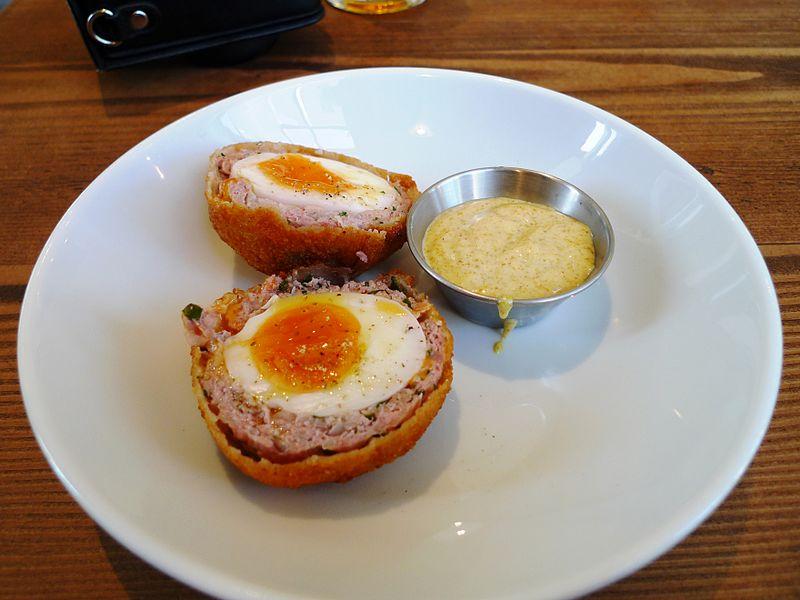 Few cookbooks have recipes for Scotch eggs, so I’m giving one by Theodora Fitzgibbon. She wrote some 30 very popular cookbooks including a splendid one called The Taste of Scotland, which also contains old Scottish food-related pictures, some of them from the late 19th century.

She did a series of these superb ‘Taste of…’ books that took in Ireland, Yorkshire, Wales, England, the West Country, London, Paris and Rome. She was born in London, her parents were Irish and she eventually settled in Dublin. Her ‘Taste of…’ books contain the best of authentic local recipes, often studded with interesting historical details.The old pictures alone are worth the price of the books.

If you come across any of her books, either new or secondhand, snap them up because they are the kind of cookbooks that provide a good read as well as genuine recipes, some from old family manuscripts.

Her recipe continues: “Boil eight of the eggs for 10 minutes in boiling salted water, then take them out, cool them under the cold tap and shell them. Beat up one of the eggs with one tablespoon of water.

“Season the sausage meat with mace, salt and freshly ground black pepper. Dip the hardboiled eggs into the beaten egg and cover it all over with the sausage meat, pressing it firmly on with the hands.

“Beat up the last egg and carefully roll the sausage meat covered eggs in this and then the breadcrumbs, pressing the crumbs into the sausage meat. Then deep-fry them one by one in the hot but not smoking oil until they are golden brown, drain well and serve on a very hot dish garnished with watercress and accompanied with mustard.” As watercress is difficult to find in Palma, you could use rocket (rúcula) or lamb’s lettuce (canónigos).

A recipe for a quite different kind of Scotch egg is given in The Glasgow Cookery Book, which was compiled for use by students at the Glasgow and West of Scotland College of Domestic Science. The main difference is that there is no sausage meat, the eggs being covered in a panada paste mixed with finely chopped cold meat.

Recipe in The Glasgow Cookery Book

You will need: 3 hardboiled eggs, 100 grs chopped cold meat, 150 mls stock, 30 grs butter, 30 grs flour, seasoning to taste. “Make a panada with the butter, flour and stock. Add the chopped meat and salt and pepper to taste. Shell the eggs, coat with a little flour, and cover with the panada and meat mixture. Egg and crumb the covered eggs and fry in hot fat. Cut in halves, arrange on a dish, and garnish with parsley. Serve with or without sauce.”

In Everyday Cookery, Mr Beeton also gives a recipe in which the eggs are covered with a croquette-like paste, but she uses chopped cooked ham or anchovies to give the paste extra flavour. She recommended that the taste of ham or anchovies should “predominate, as it should be very relishing.” She added there was no need for breadcrumbs if the paste-covered eggs are carefully fried.

Another variation on the theme is in an interesting book called Good Cookery, by W.G.R Francillon and published in 1920. Francillon, who learned to cook at the Gloucestershire Training College of Domestic Science, wrote the cookbook for students in general who had no formal training in cookery. It was adopted as the college’s official textbook in 1924.
Francillon’s recipe differs from all others I have seen in that the egg ends up encased in a rectangular box of sausage meat. It is also served in an unusual way.

Cover the eggs completely with the sausage meat, flattening the ends so that a rectangle of meat encases the egg. Coat the rectangle with flour, dip in beaten egg and then cover with the breadcrumbs, pressing them well into the sausage meat.

Deep-fry in not but not smoking olive oil, turning them over until they take on an all-over deepish golden colour. Drain well on kitchen paper. Cut each egg lengthways with a sharp knife and place each half, egg side up, on a slice of fried bread. Place on a hot plate and spoon the sauce round the bread. This recipe makes an attractive light starter for lunch or dinner.