Where to eat this autumn/winter in Mallorca

Cheers to all the restaurants taking part. | josep bagur

The Majorca Daily Bulletin salute restaurants remaining open in these difficult times, reinventing themselves to provide their customers with excellent daily menus and innovatie cuisine. This week more restaurants have joined us. Check below for new listings. 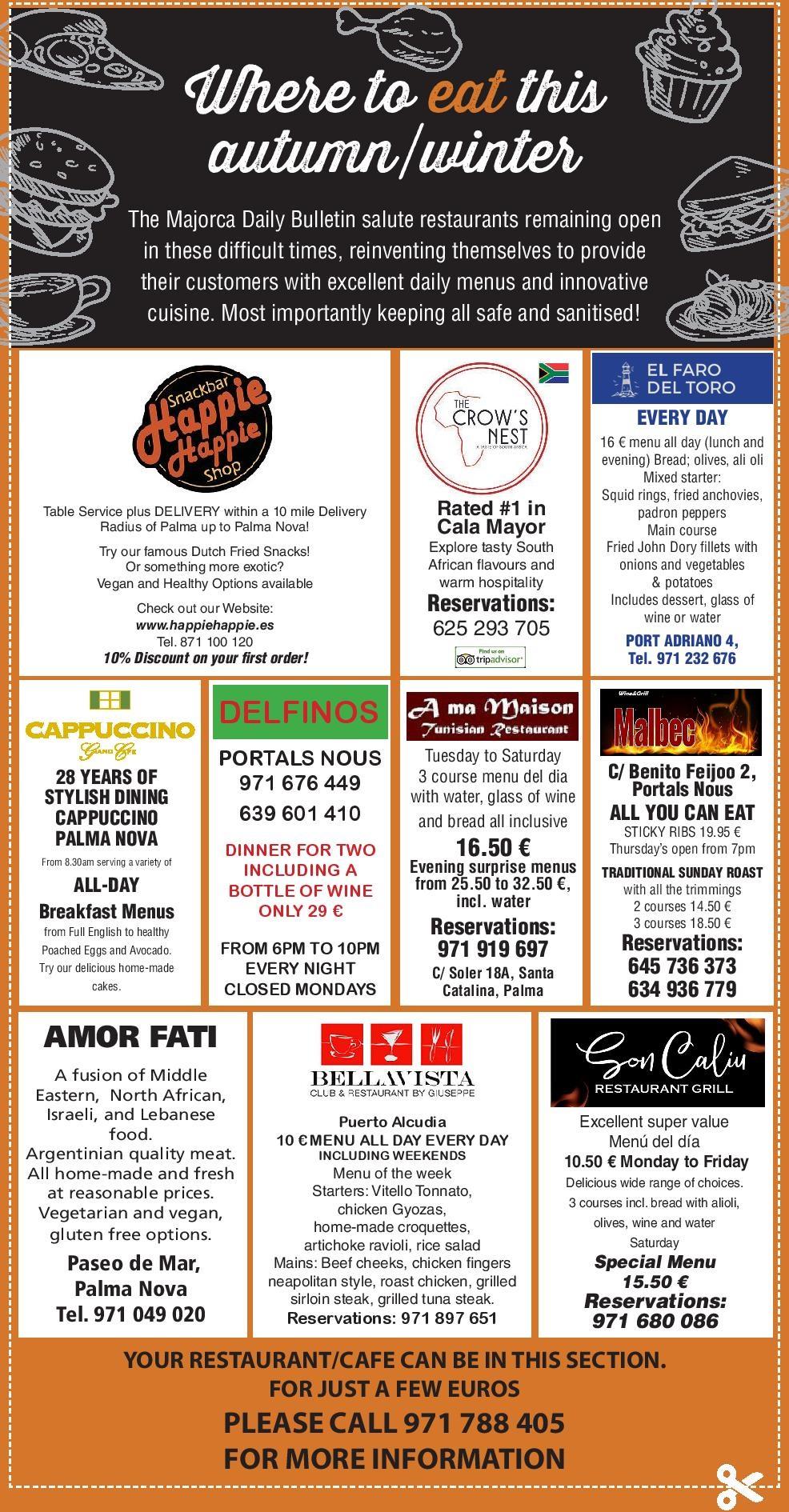 Here are three reviews of different restaurants in Palma by our Bulletin Restaurant Critic.

Restaurante La Vieja
It’s always a splendid experience when a meal starts with a 10-rated dish — and especially when it’s such an unusual one as the twice-cooked egg. It was a poached egg that still had a totally liquid yolk even after it was breadcrumbed, deep-fried and served on a bed of potato purée with cream of wild mushrooms. You need loads of chutzpah to even attempt a dish like that. Making it work so beautifully gives Canary Islands cook-owner Jonay Hernández something to sing about. The giant cannelloni with a boiled beef and hen filling packed in lots of taste but the sauce was disappointing. The salted leg meat of a Majorcan black pig roasted in a kamado oven sounded good in print but was unexciting on the plate. I expected batter-fried skate for the sandwich but it was a mish-mash, although very tasty.

Taberna Vasca Jai Alai
Basque restaurants are the best in Spain (although those in Madrid, Barcelona and other places would never agree) but that doesn’t mean everything they serve is top rate. The bomba de patatas (large potato croquettes) were indeed made on the premises but that doesn’t put them directly into the champions league. They could have been better and the €12.90 price was too high. They came with a nice enough sauce made with wild mushrooms plus a separate slightly piquant sauce that was totally superfluous. It was there mainly as an attempt to justify the high price. The fried eggs were flawless: soft yolks and crisp and frilly edges. It’s a pity the fried potatoes were so stale. Best of all were the mussels. The perfect ones were the best I’ve ever had, but four that were just normal brought the score down to 9.6…which is still rather splendid.

Vermutería La Rosa
· You must bear in mind that portions at La Rosa are very generous and always far too much for one person. You should share every dish you order. When four share, the cost of the meal is most reasonable. The Spanish potato tortilla is a very filling dish and ideally should be shared by four. It’s enormous. It comes runny, which is how many people want it nowadays. If you would rather have it fully cooked through, tell them so. Ask for it to be ‘bien cocida’. I had ordered a portion of chips, but even before I finished the tortilla I cancelled the chips — it would have been far too much. The albóndigas were all meat and cooked spot on. The cañas (at the local bar price of €1.50) came in the highly acceptable short wide glasses known as ‘chatos’. (Rambar, please take note).

There is a bar next to the Sant Felip Neri Church. They are open and they serve drinks until the early morning hours, which is rather unusual these days. 10/10

Steve Baggaley | over 2 years ago

Went to the Delfinos in Portals Nous last night and had some excellent fish and chips. The staff were very pleasant and attentive. A place that we will certainly go back to.