My French ‘onglet’ with Polisha Monika

It’s never happened before. To me, at any rate. I went to a French restaurant for a French onglet and I ended up eating it (but not sharing it) with the Polish waitress called Monika.

I didn’t even offer her a morsel of meat so she could taste for herself and see it was perfectly cooked. But there was a good reason for my apparently stingy frame of mind. It all sounds a bit strange, but there’s a simple explanation.

Les Artistes is a French restaurant that opened just before the start of the pandemic, and since then (like all restaurants) it has been opening and closing, so it hasn’t had much of a chance to get noticed. I finally booked one of the four pavement tables last week and went for an all-French meal. 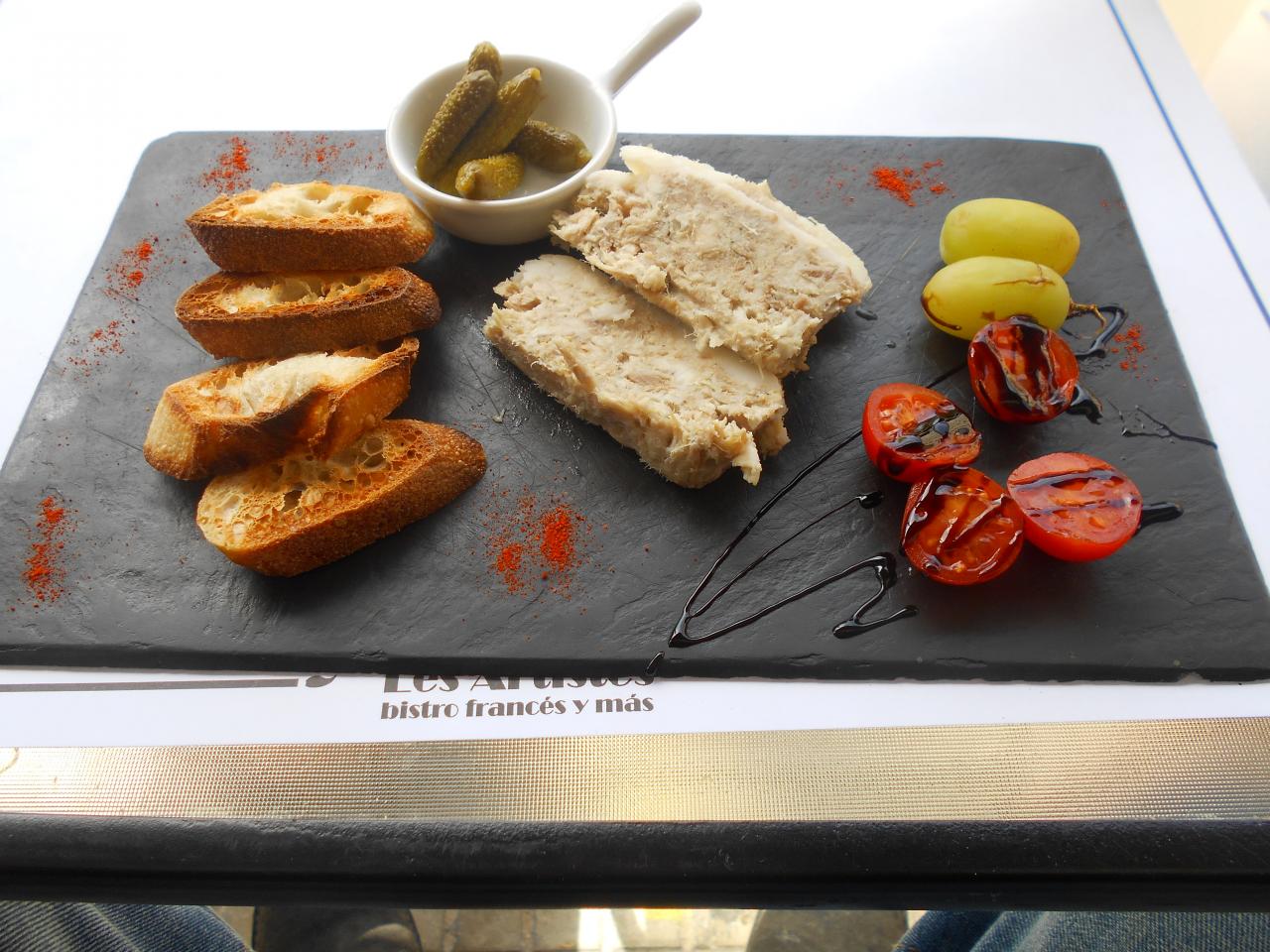 Cook-owner Alain Alzerat speaks very little Spanish, so there was a lack of communication, and because I asked questions about his dishes (and took pictures of them) he thought I was a spy from another restaurant.

When I had started on the onglet, he asked me why I took pictures of the dishes. As I wouldn’t be ordering anything else and he couldn’t influence me in any way (by serving bigger portions, for instance) I was intending to tell him I was doing a review.

But his Spanish vocabulary wasn’t good enough to understand my explanation, so eventually he said: “I’ll send someone who speaks Spanish.” That was when I met Monika, who came and sat opposite me, coffee cup in hand.

She is Alain’s Polish waitress but she’s on the dole at the moment, because with only four pavement tables, Alain can serve the dishes as well as cook them. Monika had just looked in to say hello and Alain had asked her to find out why I was taking pictures of his dishes.

But as I had a superb onglet and a mound of piping hot chips in front of me (I already knew both were worth a 10) I wanted to eat, not talk. So I fired a couple of questions to get Monika talking…while I listened.

Actually, one question would have been enough because Monika turned out to be a tsunami of words and I was able to listen, enthralled, while I got on with my onglet and chips and she told me about the countries she has worked in. 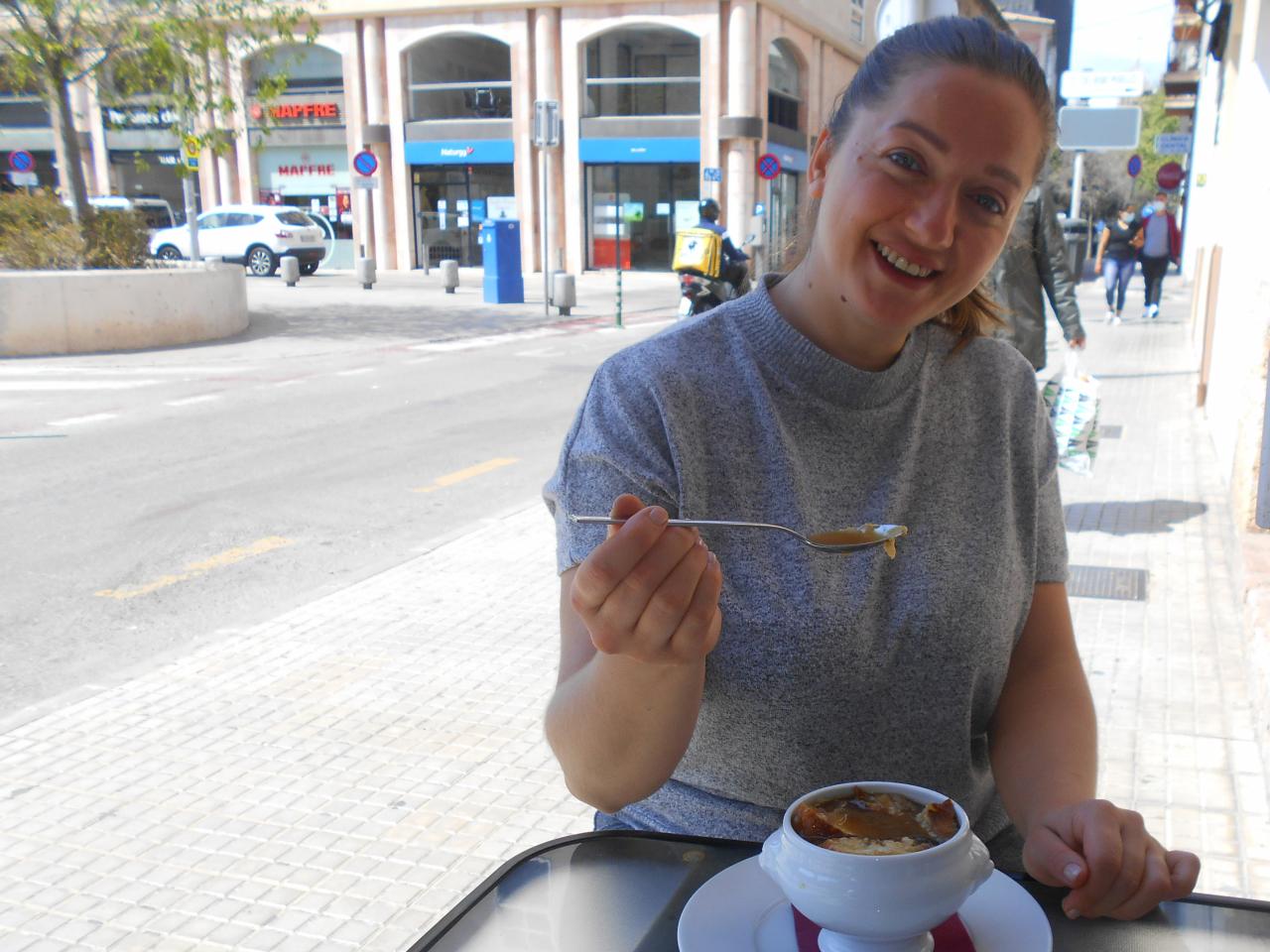 At one point, like the good waitress I’m sure she is, she asked about the onglet and I said it was perfectly cooked. But I didn’t offer her a piece to try, because I already knew she has been a vegetarian since the age of nine.

In a quiet moment, Alain stopped at the table and finally discovered I’m not a restaurant spy and that I write reviews. He took that opportunity to invite Monika to lunch and she had French onion soup with an unusual rhum baba for dessert, which she recommended highly.

But I passed on dessert, took a picture of her rhum baba and also tasted it.
It was a super lunch, and most unusual in every way. And I thoroughly enjoyed meeting Monika. It should happen to me every week. 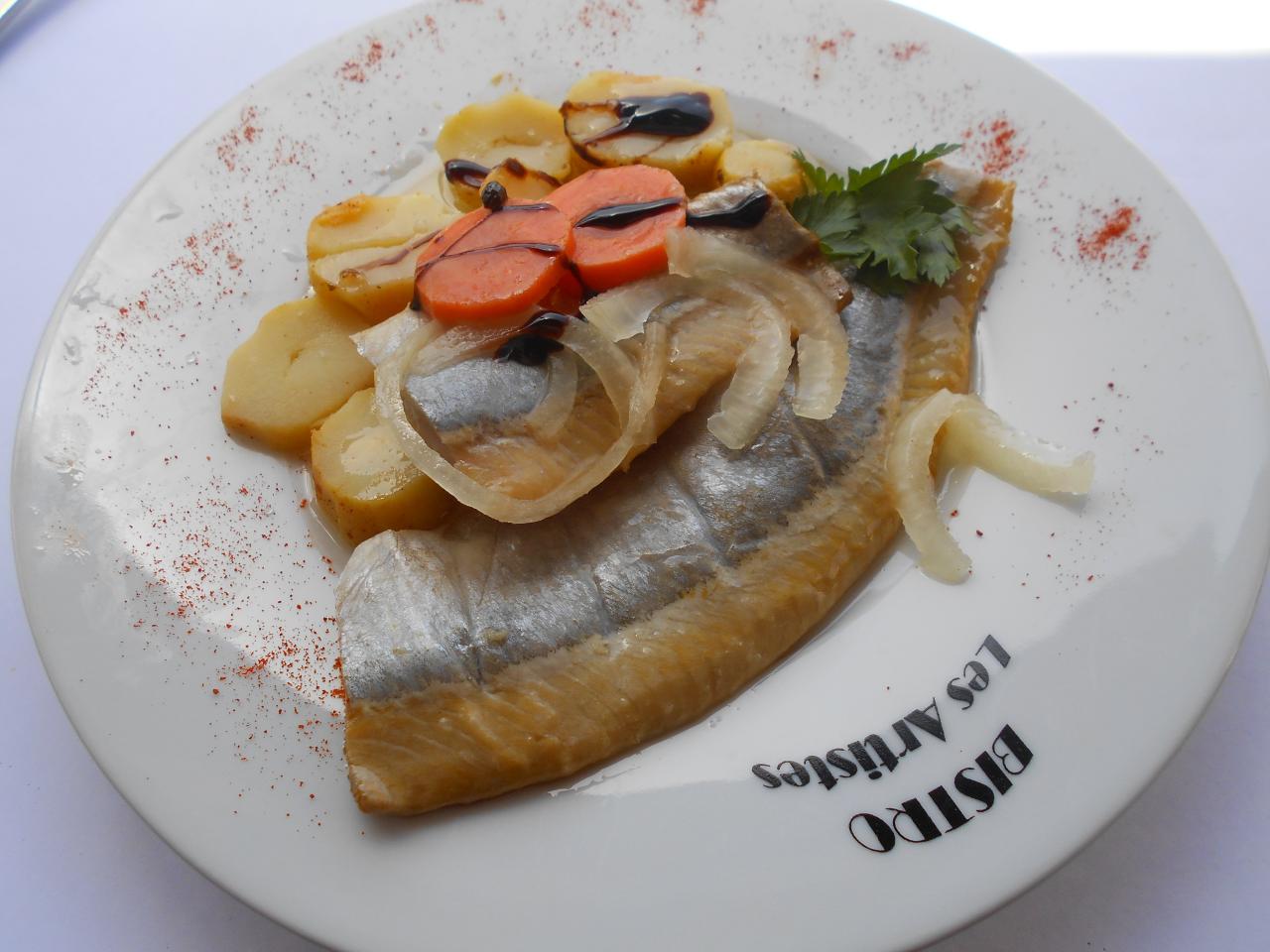 For an incorrigible Francophile like myself there are few things better than sitting down to a meal that is French from start to finish — including a glass of chardonnay from a French winery.

However, I seldom get the chance to do so unless I cook the meal myself, because these days there is a dearth of French restaurants in Palma.

The allure of indian spices

But last week I caught up with the city’s latest French place which has a real French name (Les Artistes) a genuine French cook (Alain Alzerat) and some true French dishes such rillettes de porc, filet de hareng and onglet, the most celebrated of the special French cuts of beef.

And because of an impromptu turn of events, the restaurant’s off-duty waitress sat down at my table and ordered two other French classics: onion soup and a rhum baba dessert. That’s a very French kind of French meal.

The rillettes de porc and the filet de hareng brought back memories of happy meals in France because they were (and still are) two of my favourite bistro dishes.

The nicely presented rillettes were moist and tasty, although I prefer them when the meat is pulled apart with two forks — it gives a better shredded finish. The herring fillet was silky, soft and scrummy. I wish I knew where to buy herring like that. 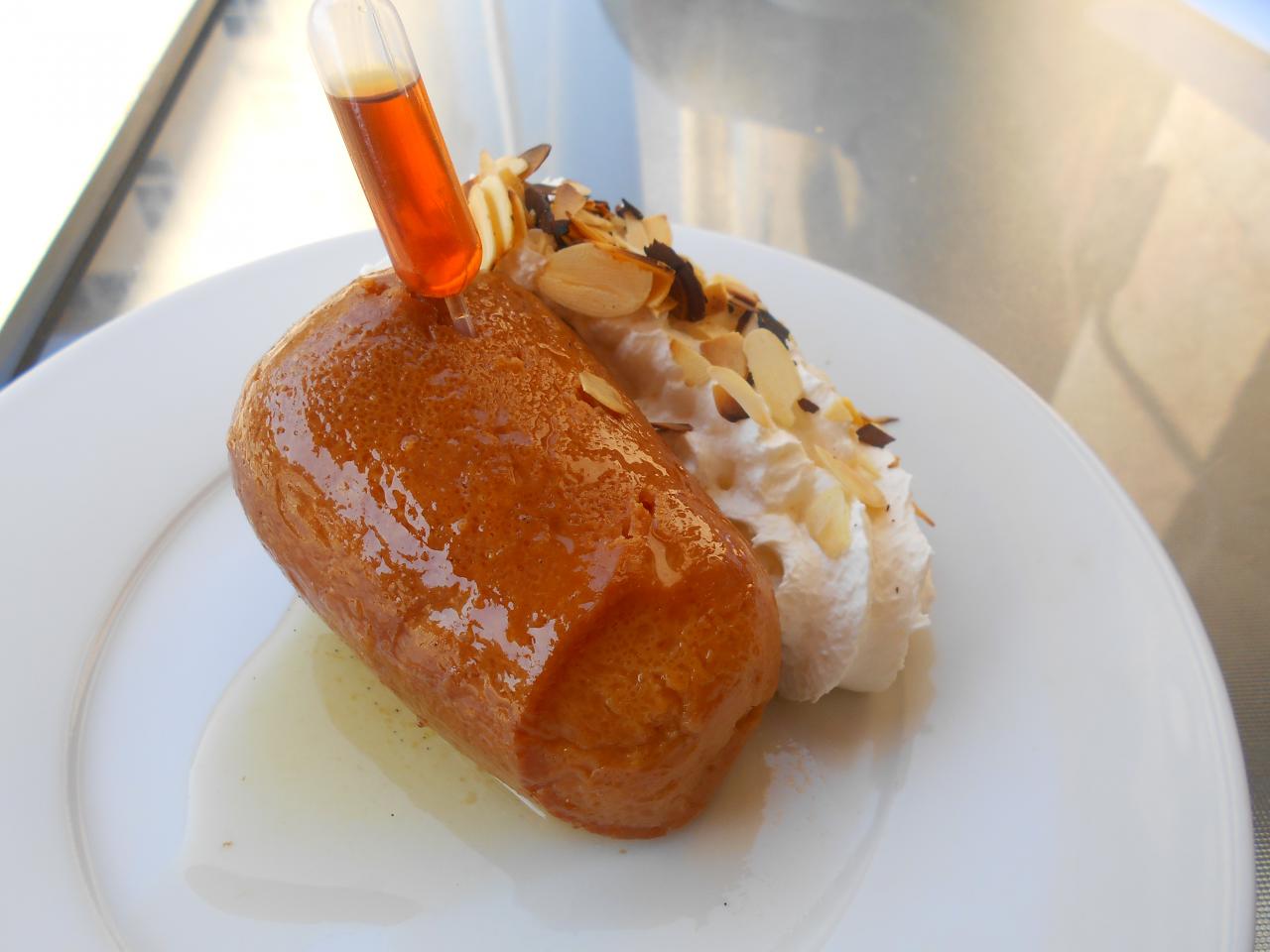 The main attraction of this meal was the onglet, one of the three smallish French cuts that are known as the butcher’s piece because he took them home for himself and his family.
It’s a meat with long fibres that comes from the thoracic and abdominal cavities.

It is deliciously tender and tasty when cooked rare and cook-owner Alzerat did a superb grilling job: the meat was incredibly tender and brimming over with flavour.

It didn’t take me very long to decide that this onglet was worth a 10 — and so were the chips. The chips were so memorable I ordered seconds, partly to see if they would be as splendid as the first batch. They were.

The baba, which cook Alzerat gets from a nearby French bakery, was unusual in my experience in that instead of being drizzled with rhum, each diner uses a small plastic syringe to inject the rhum in different parts of the surface.
Monika said: “It gives the baba a very light texture. Like a cloud. Like a rain cloud.”

This was a very French meal and the best (and most authentic) one I’ve had in recent years. The rillettes de porc was a good version, although I prefer the meat to be shredded with two forks rather than chopped. The hareng was a lovely fleshy one and reminded me of bistro meals in Paris.

The onglet is a special cut consisting of two muscles separated by a layer of connective tissue and it has long fibres that give it a lovely texture — if it is grilled rare. It is all too easy to overcook it and make it tough. But it was beautifully grilled, incredibly tender and so tasty. It was awarded an immediate 10.

The chips were superb in the best French style and were also worth an instant 10. Monika’s rhum baba, of which I had a little taste, was splendid and I loved how it was injected with the rhum, thus leaving the exterior dry and providing a nice contrast of textures.

Restaurant Les Artistes, Plaça Comtat de Rosselló 4, Palma. (The square on the east side of the Mercat d’Olivar). Tel:871-50 48 83. Closed on Sundays.

As there are only four small pavement tables you should make a reservation to avoid a wait. If it’s a sunny day you’ll have a sunny lunch because there’s no shade on that side of the market.