Wild Mallorca: a question of orchids

It's a busy time for nature

We have looked at several orchid species this year in my recent articles, including Bumblebee, Pyramidal, Mirror, Bee, Man and Naked Man Orchids, but April will see a few more specialities coming into flower, with the Bug Orchid being one of them, along with the beautiful Little Early Purple Orchids and a slight change with Wild Gladioli which are coming into flower now, all adding a touch of dark colours to the woodlands and open fields.

It is certainly that time of year when the flowers begin to show off their multitude of colours and when the birds are singing their hearts out to claim both a territory and a mate. It's a busy time for nature and a good time for us nature lovers with plenty to see and photograph.

My first Bug Orchid was alongside the main path leading into the Albufera Marsh, where I was guiding a group of birdwatchers from the University of the Third Age (U3A) from England.

We had stopped to look at some roosting Night Heron's in the Tamarisks along the opposite bank when I noticed the orchid right by my feet, I had almost stood on it as not only was it small but it blended in well with the grasses.

A Cettis Warbler was calling alongside us in the vegetation but just wouldn't show itself. This orchid gets its name from the odour it exhales, supposably reminiscent of bed bugs. Grassy areas, maquis and open woods are where they flourish, where the 2 - 4 leaves taper to a lance shape. 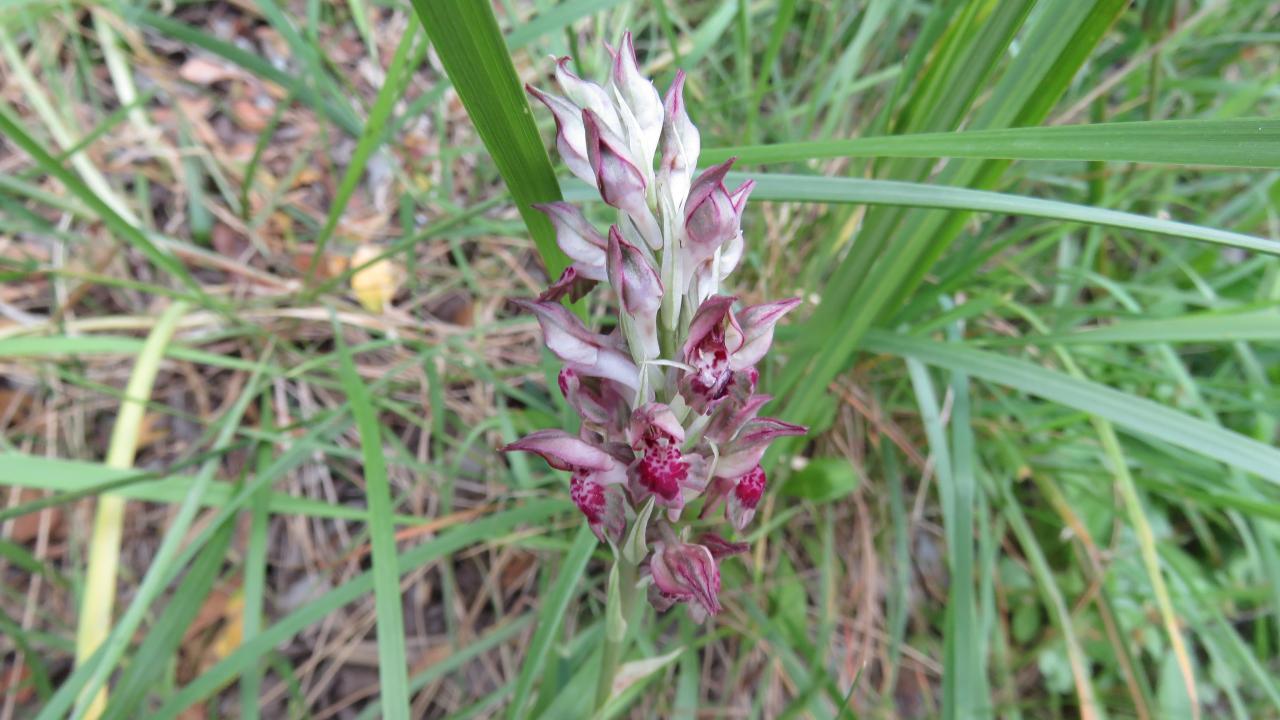 The pointed sepals form a beaked hood and the flowers can be brownish, red or green. What struck me most about this orchid was although once seen it was obvious and eye catching, but prior to that it was blending in so well with the other plants.

The group certainly liked seeing it too and in fact it was a new species for all of us. This is what I love about the orchids, when you specifically search for them it is exciting when you actually find them, but when you stumble across some by chance it is equally as exciting.

A walk along the edges of the Holm and Turkey Oak woodlands, sunny hillsides and open slopes will reveal a lovely orchid species that can either be found growing solitary but more often in groups.

One year I counted 93 growing on one open bank. Nothing looks more pretty amongst the different greens of the trees and the darker colours of the woodland floor than a group of these dainty orchids growing, and if the sunlight is poking through the canopy, they look magnificent.

They are a perennial herbaceous plant with stems up to 10 - 25cm in height, green at the base and purple on the apex. The root system consists of two tubers. The leaves (grouped at the base of the stem), are oblong-lanceolate, pale green and sometimes with brownish-purple speckles. They can produce around 6 to 20 flowers gathered in dense cylindrical spikes. 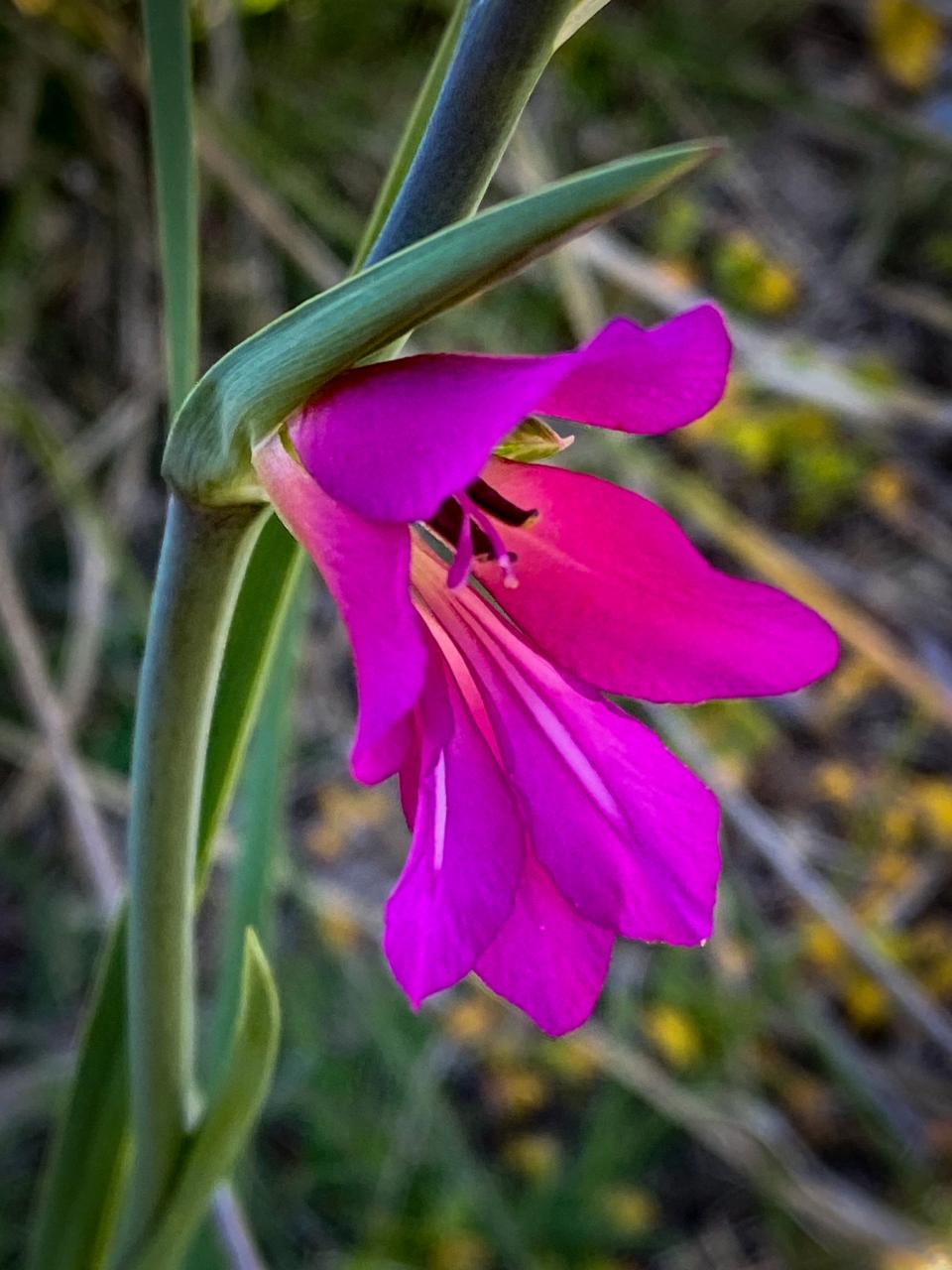 The flower size is about 1 inch and the colour varies from pinkish-purple to a deep purple. They bloom from April to June adding a splash of colour wherever they grow.
This orchid attracts pollinating insects such as Bees and Wasps of the genera Apis, Bombus, Eucera, Andrena, Psithyrus and Xylocopa. On occasion, Beetles can be attracted too with the appearance of its flower which mimics other species.

Nicole T Benitson has written a great book on the Orchids of Mallorca which forms part of my reference library. Of course, the woodlands in April don't just entice me in for orchids, there will be bird song too, and nothing beats looking on the ground for orchids and other plants and being serenaded as you go along by songsters such as Blackbirds and Nightingales, with the softer calls of the Great Tit and Chaffinch, and the Blue Tit (if you are at a higher altitude than normal). Woodland glades are also home to the dainty little Speckled Wood butterfly too, and if you're really lucky, you may have stumbled across a woodland pool which attracts Crossbills down to drink.

Now, I know what you're thinking, the Gladioli is not an orchid, but on occasion I have been shown pictures by people who had mistaken them for marsh orchids. Besides, they are in flower now and are a delightful plant adding a splash of colour to the fields and edges. Gladiolus (from Latin, the diminutive of gladius, a sword), is a perennial cormous belonging to the iris family.

It is sometimes called the 'sword lily'. Gladioli grow from round, symmetrical corms, (similar to crocuses) that are enveloped in several layers of brownish, fibrous tunics. The genus Gladiolus contains about 300 species.

Their stems are generally unbranched, producing 1 to 9 narrow, sword-shaped, longitudinal grooved leaves, enclosed in a sheath. The leaf blades can be plane or cruciform in cross section (see the close up shot courtesy of Lesley Atterwill - @LesleyAtterwill)

They will flower from March to June, sometimes longer and can occur in large numbers. I recall one year down at S'Illot waterworks where the surrounding fields planted with crops had an abundance of Gladioli growing as well, it was a sea of green interspersed with deep pinks. The flowers of unmodified wild species vary from very small to perhaps 40 mm across, and inflorescences bearing anything from one to several flowers. 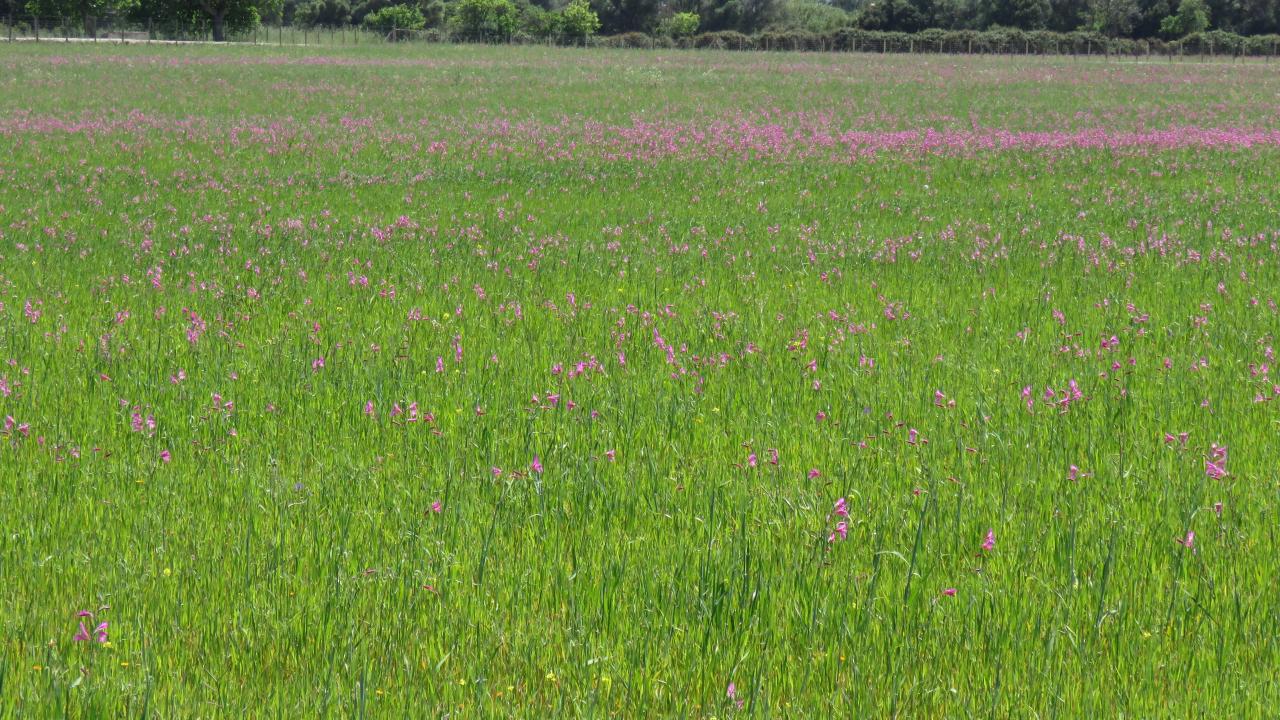 The flower spikes are large and one-sided, with secund, bisexual flowers, each subtended by two leathery, green bracts. The sepals and the petals are almost identical in appearance, and are termed 'tepals'. The flowers are variously coloured, ranging from pink to reddish or light purple with white, contrasting markings, or white to cream or orange to red.

Where the Wild Gladioli grow, birds feed, as both do well in the open fields and plains. The Corn Bunting will be present, perched at the top of a tree to give out its' 'jangling keys' like call, and groups of white Cattle Egrets will be feeding amongst the tall plants searching out food.

In the more open areas, a Thekla or even a Short-toed Lark may be feeding with Red-legged Partridges scurrying about here and there, and the ever present little chattering groups of House Sparrows never far away.

Turtle Doves passing through on migration will be perched up on trees or fences. One thing for sure, is that orchids and other plants mean one thing - you have to be outdoors in different habitats to find them, which is good for your wellbeing.

For me, the open plains offer the chance of seeing Wild Gladioli in good numbers, and where I know that the breezes will be moving across the fields and through the crops, where I will be looking out for a number of bird species as well.

The wooded areas on the other hand, offer the chance to be alone, surrounded by trees and shrubs, serenaded by bird song and looking around on the ground for a splash of colour or for an orchid that lacks colour such as the yet to flower Bird's Nest Orchid, and all the while watching where I am going, I still have the memory of walking once into a low branch and seeing stars not orchids.