Thumps up or Thumps down?

There are some extremely good menús del día in central Palma (and elsewhere) but sometimes the choice of dishes isn’t as varied as it at first seems. Even when we can select from four starters, mains and desserts, it’s amazing how many possibles get rejected almost at once. And that’s the non-fussy eaters…some of the finicky ones have a really tough time of it.

But last week at the Gastrobar of the Hotel Saratoga in Paseo Mallorca, I came across a menú del día that solves this little problem brilliantly. They call it ‘Our Menu, Your Way’ and it offers 24 dishes listed in five sections such as ‘from the sea’, ‘from the garden’ and ‘from the countryside’.

If you’re having a half menu (€9.50) you choose one of these dishes, plus a drink (choice of four) with a dessert (choice of four) or a coffee. Those ordering the full menu can select any two dishes from the list of 24.

Among the dishes you won’t see on every menú del día are grilled salmon with wild rice, risotto with seasonal mushrooms, salad greens with avocado and salmon, green salad with goat’s cheese and crispy bacon, endives with blue cheese cream and nuts, warm mushrooms and prawns salad, Iberian pork fillet with sobrasada sauce, moussaka, fillet steak carpaccio, fish and prawns cannelloni, and marinated free range chicken breasts — that’s only 11 of the 24 on offer.

This is a very convenient way of arranging a menú, both for the kitchen and the customers. It’s especially suitable for people who work in the centre of Palma and eat out most days between Monday and Friday. There’s enough variety in those 24 dishes to make for adventurous eating on a daily basis — for those who can afford the €16.50 price.

In these days of strict anti-covid measures when restaurants can serve food only on terraces, the Gastrobar of the Hotel Saratoga is suitable for another reason: diners are well-sheltered from the elements. Some of the tables are under the Paseo Mallorca arches and you can have a dry meal even on a rainy day.

Our waitress was young and Italian and was kept very busy throughout the meal, dashing from table to table and to the kitchen. But she always had time to stop when a customer requested her presence — and at all times she had a lovely smile for everyone. She was also extremely efficient.

She was on her way to a 10-rating until I asked about the streak of powdered spice across the dessert plates. It had an indeterminate aroma and didn’t taste of any spice I have ever come across.

The waitress should have known which spice was used, but she didn’t. That cost her one decimal point. She sniffed the spice and then confidently announced it was cinnamon. But you could see the spice on the plate didn’t have cinnamon’s talcum powder texture. And there was no trace whatever of any cinnamon aroma. So she lost another decimal point. However, 9.8 is still a pretty good rating. 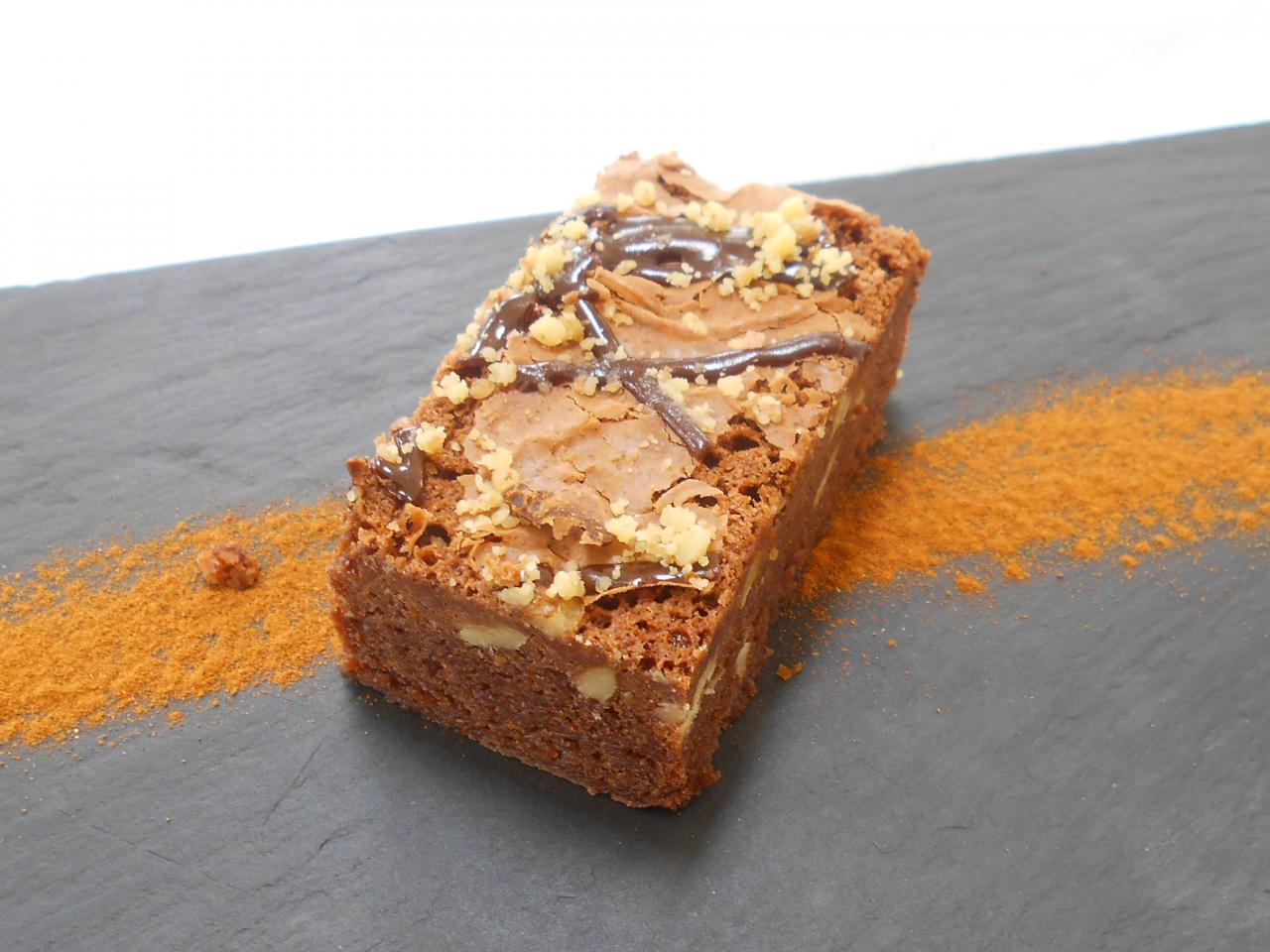 Certain dishes catch my eye when I see them on a menu and there are some I come across so infrequently I immediately order them when they finally put in an appearance. One of these is skate, always available at the market, but seldom on restaurant menus.

My French ‘onglet’ with Polisha Monika

When I saw it on the Gastrobar menu and done in the Andalusian batter-fried way, I immediately knew I’d be eating there and that skate would be my starter.
There are two main kinds of batter in Mediterranean cooking — the soft and the crisp. Sometimes the soft is acceptable, such as that used by some Mallorcan cooks for calamares a la romana.

For the fillet of skate a soft batter was used and it most certainly wasn’t the right one. Skate, and any kind of soft white fish, needs a crisp batter — to provide some contrast of texture. The skate was most edible and enjoyable — but it would have been so much more memorable with a crunchy batter.

The pork spare ribs were braised to a lovely off-the-bone tenderness but they had a good consistency and weren’t at all stringy, which all too frequently happens at other restaurants. 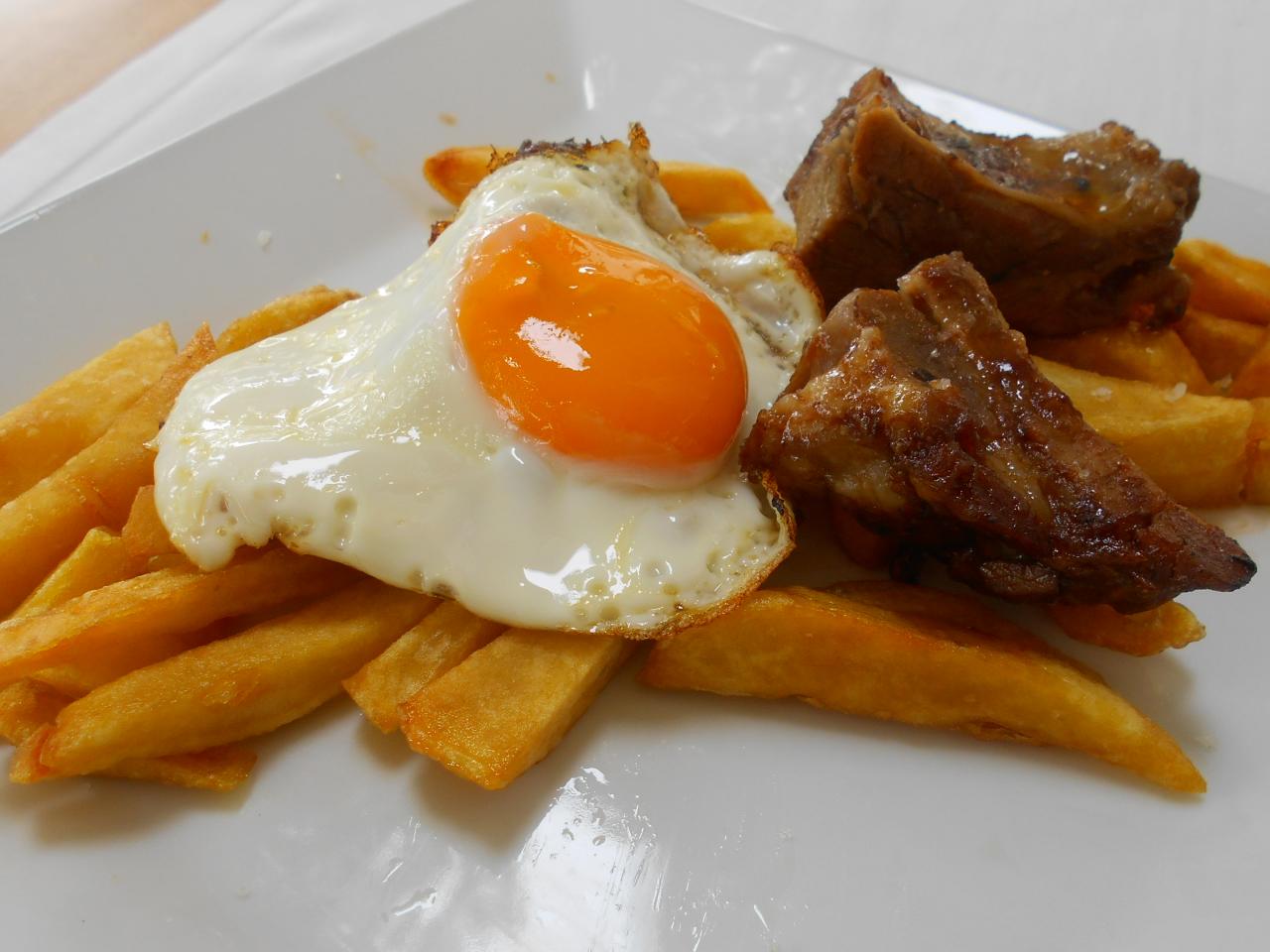 It’s a pity the egg was done on a hotplate — the dish would have been so much better with an egg fried when needed in a pan with 3 cms of olive oil. This is one of those examples of restaurant cooks doing what is most convenient for them instead of what is best for the dish.

Although I’m not a dessert man (for me it’s the least important part of a meal) I prefer restaurant cooks to take good care of this section of the menu. Apart from anything else, it’s good for business — the vast majority of diners want to end a meal on a sweet note and the better the dessert, the more pleased they are.

No one will have any complaints about the brownie made with dark chocolate, or the cheesecake. They both fulfilled their mission of producing a scrummy finale and both were nicely balanced in texture and taste.

This was the third time I’ve eaten at the Gastrobar of the Hotel Saratoga and the meals have always been most enjoyable and good value for money. One of the good things about the Gastrobar is that the kitchen is making an effort to produce interesting dishes, including some you won’t find at other places in the centre of Palma — or in other parts of the island. 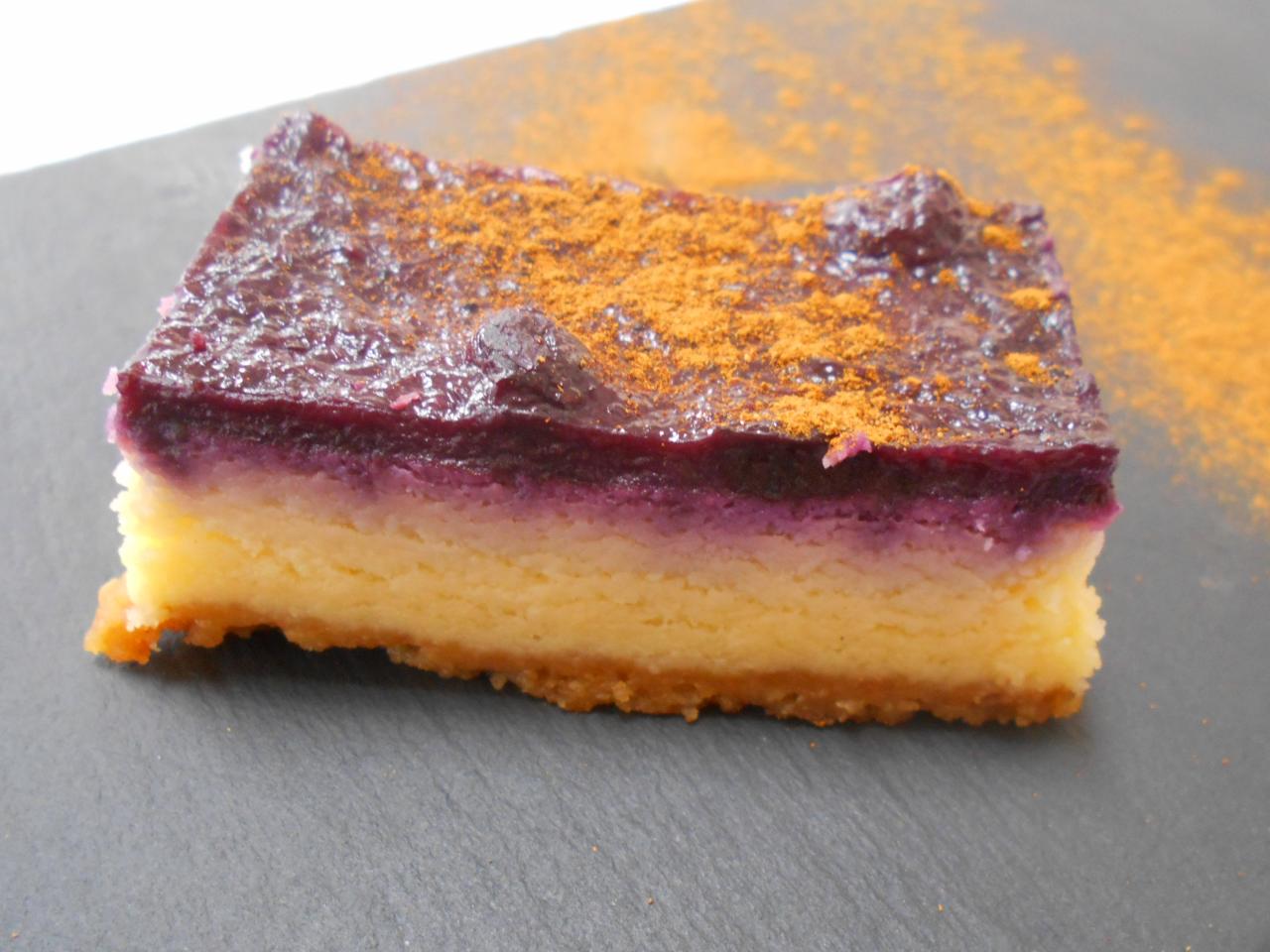 Their batter-fried skate was a good example of this initiative: so few restaurants have skate on the menu. It’s a pity the batter wasn’t a crisp one — but the kitchen can solve that little problem by making a crunchy one. The pork spareribs were thick pieces and very nicely braised — which means falling-off-the-bone tender but without being stringy. The brownie and the cheesecake were moist and tasty. Someone is taking good care of the desserts.

Gastrobar of the Hotel Saratoga, Paseo Mallorca, Palma. Their menu is served every day between 1pm-5pm, with last orders at 3.30pm. They have gluten-free and vegan options, so ask the staff about them.

I had the full menu at €16.50 but needed an extra picture so I had a second dessert, a slice of cheesecake for which there was a charge of €5.90, making the total cost €22.40 with VAT. The cheesecake was a menú del día portion at à la carte prices. But I’m not complaining: the batter-fried skate, the pork spare ribs, the brownie and the well-pulled caña added up to a most enjoyable meal and good value for €16.50. 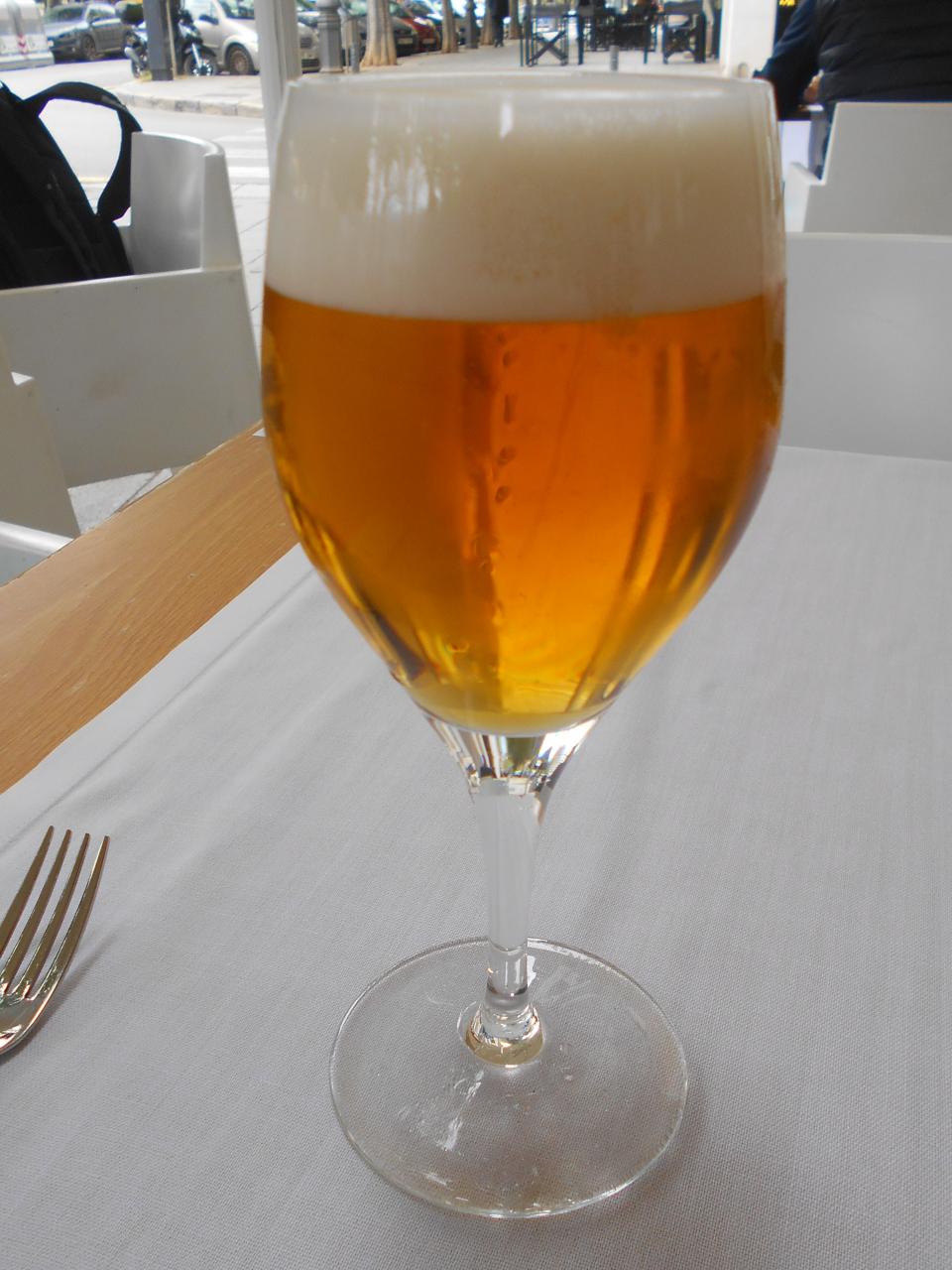