Enjoy Majorca: The first of May and all that in Mallorca

The first of May holds a special place in the Mallorcan calendar. It is the day when "summer" starts. The island has long had a disregard for the niceties of conventional seasons, content to ignore two of them and to rationalise four down to two - summer and winter.

Tourism has been the reason. The summer starts on the first of May and finishes on the last day of October. And summer equates to the "season", not in either astronomical or meteorological terms but rather as a uniquely touristic device for determining - among other things - the start and end dates for job contracts.

There was a time, and I used to wonder if I simply imagined it, when the first of May heralded a distinct increase in activity. It wasn't imagination. There genuinely was a change. For example, where transfer coaches hadn't been visible at the end of April, they now were - bang on May 1 and in accordance with contractual arrangements.

The first tourists of "summer" would step down from the coaches, eyes blinking against the bright spring (sic) light. All that seemed to be missing were ranks of local authorities dispensing gifts in grateful thanks for the new season and the new arrivals. Back in Franco's day, they probably did. Ah yes, Franco, I'm coming to him.

The first of May is not just representative of the island's tourism heritage. It is also intimately linked to a cultural heritage of religion and fairs. The first day of summer contrasts with the first day of winter in a most saintly of fashions. The first of November is All Saints' Day, when islanders honour all the saints as well as their dead and lay flowers and wreathes in memory of the summer that had died the day before.

The first of May, on the other hand, is all to do with one saint, who - until recently - was Mallorca's only homegrown saint. Catalina Thomàs, La Beata, was born on May 1, 1531. Ten years from now, I think we can safely assume that there will be no shortage of events to commemorate the five-hundredth anniversary.

The May fairs, some of which are the first of May, will alas not be taking place once more. The oldest is that of Sineu, for which there is some debate as to when the first was held. The generally held view is 1318, but Mallorca's history would not be Mallorca's history without there being competing theories. Perhaps there can be agreement on one thing - it was an awfully long time ago.

Spotlight on Soller: It’s off to work we go...

While the gathering of crowds prevents the fairs from returning in their full glory, some dispensation will be given for a gathering in Palma's Parc de la Mar this Saturday. Numbers will be strictly limited for what will be the annual May Day rally. May Day is Labour Day, and this is where Franco comes into the story.

During the 1960s, celebration of Labour Day and International Workers' Day was highly clandestine. It would be at homes, although some would go onto the streets and trust that they wouldn't be detected as they daubed graffiti to commemorate the day. 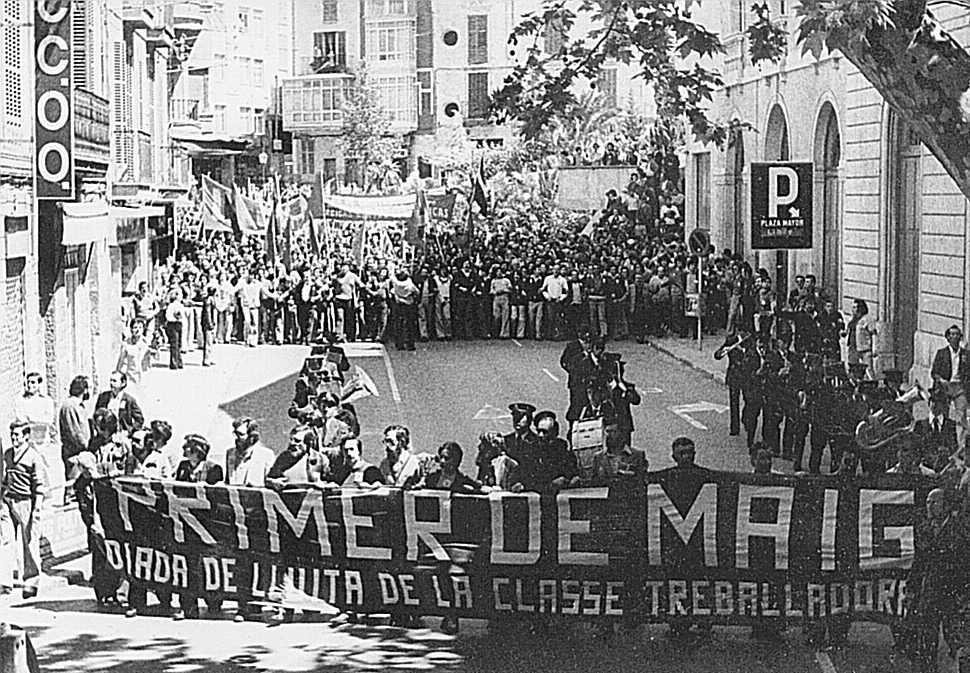 By 1970, there were small gatherings in forest areas. Communists would come together with those of other left-wing persuasions and contemplate unity against the dictatorship and spreading an anti-capitalist message to the main industrial and tourist centres. Bellver Forest was one location for such gatherings; behind the cemetery of La Vileta in Palma was another.

In 1975, a few months before the death of Franco, the most significant of those May Day protests against the regime occurred. Its significance lies in the fact that thirteen people were arrested and also in the venue - Lluc Monastery. What happened was that a group of people threw documents from the monastery that contained the manifesto of the outlawed Junta Democrática de España. A report of events suggests that there was not "excessive alarm" among crowds who had gathered (as it was a holiday) when the Guardia Civil intervened.

The thirteen were taken to Inca and appeared before a court. Meanwhile, the Vicar General of the diocese had, so it was reported, taken an interest in the case of those who had been arrested. This interest may have been relevant; the thirteen were released around nine o'clock on the evening of May 2.

The following year, and circumstances had changed. Franco was dead and reform was afoot. But repression hadn't gone, and there were concerns about the style of the transition. Nevertheless, May Day 1976 marked a shift, as the political steering committee for the organisation of the communist left in Mallorca and the Balearics demanded the replacement of a political regime that had served the financial and economic interests of the bourgeoisie.

May Day in Mallorca was about to become more important. But forget the politics, as somewhere along the way the start of the summer season was invented.