The Spanish like to decorate the potato salad with tinned white asparagus, red pepper and olives

One of the most popular dishes in any typical Spanish tapas bar is a Russian salad, known here as “Ensaladilla Rusa” or more simply as just plain old “Ensaladilla”!

It’s a common dish prepared all over the country and every traditional Spanish cookbook has an ensaladilla recipe in it somewhere. I’m a huge fan of ensaladilla and it became one of my favourite Pinxos some years ago when I lived in San Sebastian, where it was often topped with a fresh, tender langoustine and served with crunchy little breadsticks called picos.

Quite why it’s called a Russian salad I have no idea. It obviously has its roots somewhere in Russia or in Moscow to be more exact. Apparently it was a Belgian chef called Lucien Olivier who invented the original, classy version of a potato salad, while working in the exclusive Hermitage Restaurant where it was known as salad Olivier.

Unfortunately, the secretive Olivier took the original recipe to his grave, but food historians think that it was probably topped with expensive ingredients such as venison and caviar. Spain’s classic dish doesn’t much resemble Olivier’s wealthy man’s version and a typical ensaladilla rusa recipe includes more humble ingredients such as potatoes, peas, and carrots with the addition of tuna, olives and hard-boiled eggs.

For me the key to a good ensaladilla Rusa is making a homemade mayonnaise, but if you want to use jarred mayonnaise it also works perfectly fine. I also like to mix all the ingredients while they are still luke warm and serve the salad without being refrigerated but it is also delicious chilled and can be made in advance and served as part of a selection of tapas or as a side dish to grilled fish or barbecued meats.

The Spanish like to decorate the potato salad with tinned white asparagus, red pepper and olives and if you’re feeling a little more decadent, serve with some fat, juicy cooked prawns cooked “a la gabardina”!

Boil the potatoes in their skins until just cooked. Drain and leave to cool.
Boil the diced carrots until just cooked, drain well and place in a large bowl.
Add the cooked peas, chopped beans and tuna meat to the carrots. Peel and dice the potatoes and add them to the other vegetables. Fold in the mayonnaise, chopped egg, olives and serve immediately or refrigerate until required.

In a large bowl, whisk together the eggs, flour, baking powder, salt and paprika. Add the beer and leave in a warm room for 20 minutes.

Heat a good amount of vegetable oil in a deep heavy-bottomed pan until a breadcrumb sizzles and turns brown when dropped into it. 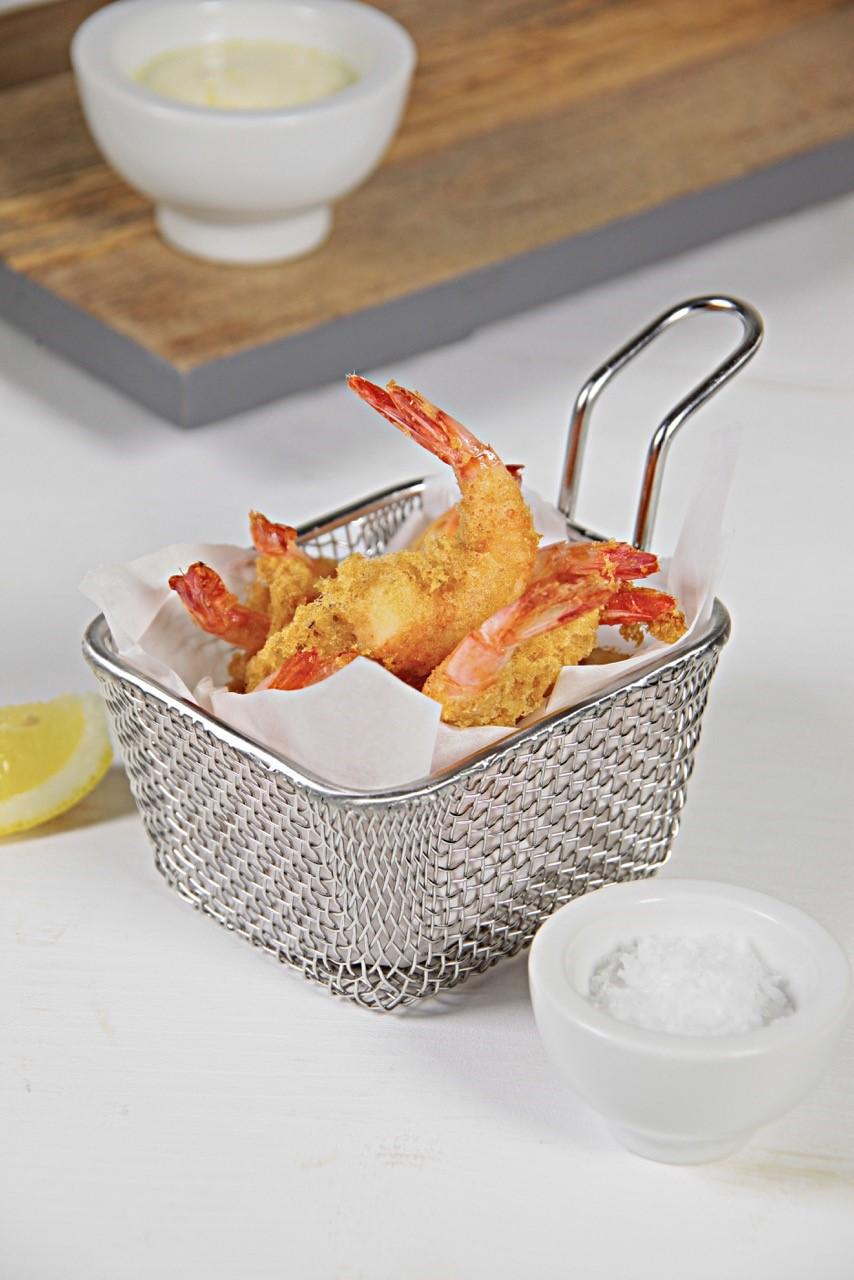 Dip each prawn into the batter (holding by the tail) and add to the oil.
They will cook very quickly. Cook for about 1 minute until golden brown.

Remove to a paper towel to absorb the oil. Serve hot with a little garlic aioli for dipping and big spoonful of Ensaladilla.