Balearic Helicopters is now offering the experience of a lifetime from its base at Son Bonet airfield on the outskirts of Palma.

Owner, Captain Jonny Greenall is now ready to take off into the post-Covid era with an exciting expansion plan with the recent arrival of a luxury five-seater Eurocopter EC120.
“The pandemic has obviously been extremely frustrating; still is.

Last year, flying time was some 70 per cent less than usual; clients quite simply were unable to get here from other parts of the world. But instead of sitting at home crying about it, I decided to make the most of the lockdown and think about the business and our future. It’s something I’ve never really had the time to do.

It’s normally hands-on, flying, training and running the business. I’ve never really had the time to sit back and think about the business and plan for the future. That is exactly what I’ve done, and we have a very exciting project ready to take off once we can all get flying again, especially our clients.”

Jonny has lived in Majorca since 1993 and learnt to fly the Robinson R22 & R44 with Sloane Helicopters Mallorca. He then went on to complete his Commercial Helicopter Licence and Instructor Rating with Sloane Helicopters (at Sywell and in Mallorca). Jonny also has his JAA fixed wing licence. He has been flying in Majorca since 1999 as well as having made numerous trips around Europe and the UK. Jonny is also a Core Team Member of EHEST - the European Helicopter Safety Team. 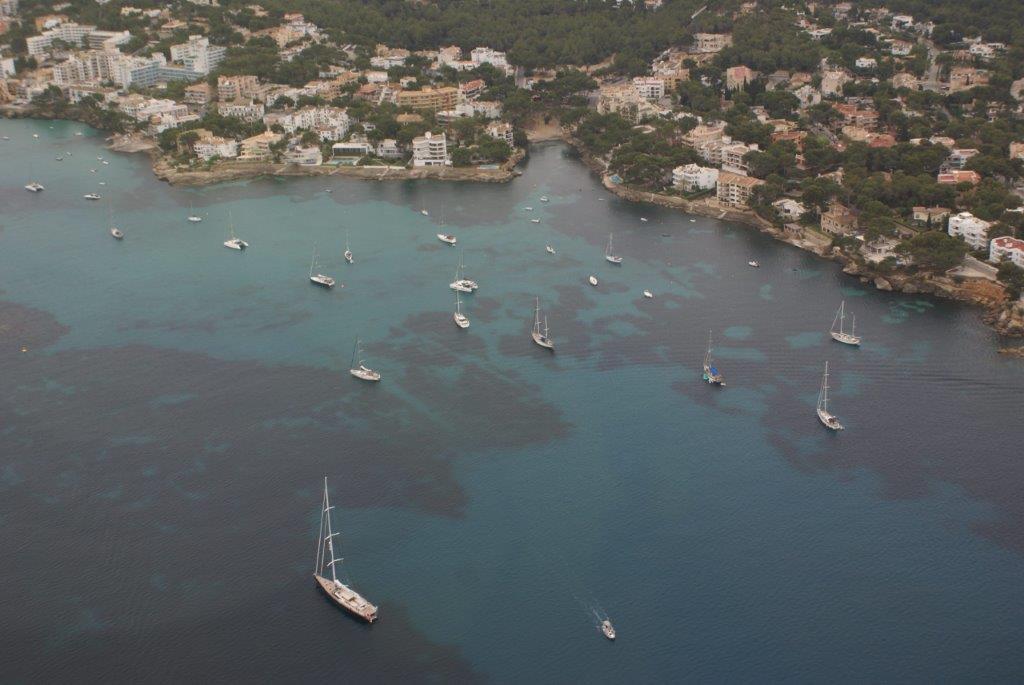 And now, to ensure that growth continues, Jonny has not only leased a five-seater luxury Eurocopter EC120, he and his crew will be using the latest edition to their fleet of helicopters as the foundation for a bespoke luxury service the island has never seen before.

“The new helicopter will be used primarily for the various tours we offer of the island, be they to the best restaurants, hotels and vineyards or sightseeing and transfers from Palma airport’s private jet terminal to hotels, villas or yachts,” Jonny said this week.
“What is more, we are also offering inter-island shuttle services and also flights to the mainland. 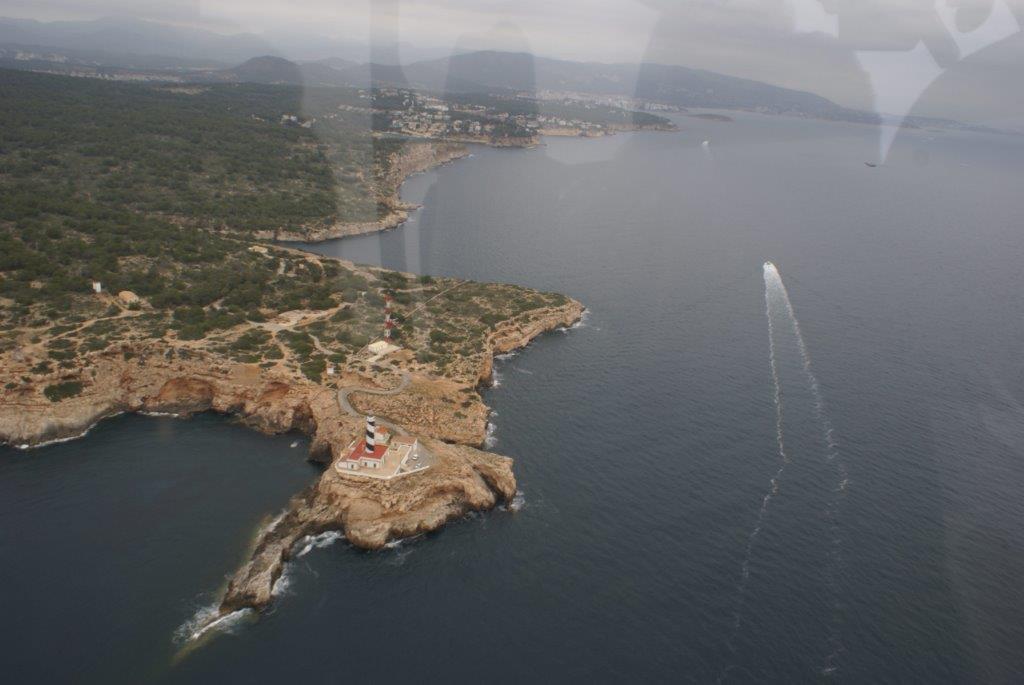 “No sooner has I brought the new helicopter down from Germany last weekend, we were already taking bookings for a picnic flight and luxury sightseeing tours. Seating fours passengers plus the pilot, the experience is second to none in the Balearics.
“With a maximum speed of 277 kilometres per hours and a cruising speed of around 200 kilometres per hour, it can only be compared to lying in a luxury limousine. It’s so steady and quiet, it really is a joy to fly and to travel in.”

And, I can vouch for that. As we skimmed over the water along the magnificent north east coast of the island, I just sat back and soaked up the view at a steady 180 kilometres per hour. The flight was so smooth I had no idea how fast we were flying until Jonny told me.
“Another new tour we are offering this year is a sunset flight which has to be booked three days in advance, but of course, all of the services we offer can also be carried out on board our three other helicopters. 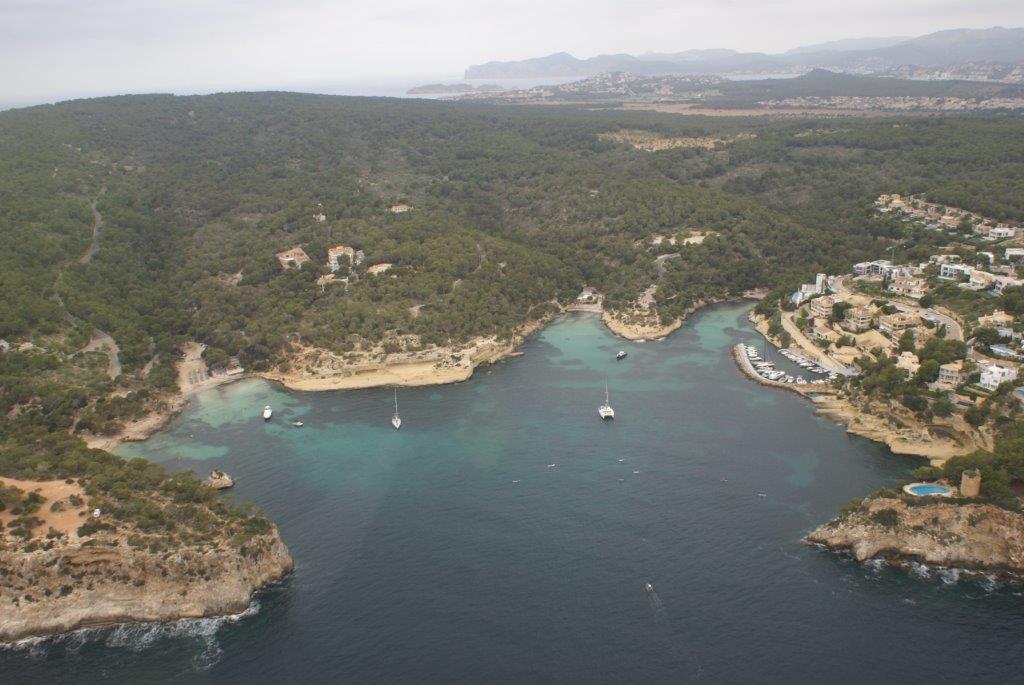 “More and more superyachts are being built with helipads so the skippers and crew need to be fully trained in how to handle helicopters landing and taking off from the vessel and Balearic Helicopters is playing an important role in training crews across Europe.
“We are also providing the yachting industry with a one-stop management service.

“With a significant increase in superyachts returning to Balearic and Spanish waters this summer, many are coming from all over the world and need assistance with regards to permits and general knowledge of the areas they are sailing. So we are not only taking care of superyacht helicopter operations but the yachts as well.

And, from the response we’ve already had this year, I think it’s going to be a busy superyacht season for the Balearics and the rest of Spain as we cover the whole country,” Jonny explained.

Balearic Helicopters has also managed to secure clearance from the Civil Aviation Authority in the United Kingdom to train UK pilots here in Mallorca and their Spanish licenses will be recognised in the UK, something which was very much thrown in to doubt as a result of Brexit.

“It took months of hard work but we were granted permission in the end and that is another major breakthrough for us this year and moving forward. That said, the Covid travel restrictions are holding us back. We have a mounting waiting list of clients, be they for leisure or training, but many, in particular the British, still face travel restrictions.

“However, what we are seeing is a gradual increase in demand from second home and yacht owners as some countries do begin to ease travel restrictions.

“One important change in the market we have noticed is that the top end is not only opting more to charter private jets but also enjoy more controlled and private experiences such as luxury helicopter flights because that way they can remain in their own bubble.

“Our clients are in a totally Covid secure zone, they hire the helicopter and it is all theirs for the duration of their tour or airport transfer and that is an extremely important feature because people are changing the way they travel, they are more safety conscious and Balearic Helicopters offers the ideal solution.”