Food for thought: Tuna and swordfish

In the old days, when friends and family visited me throughout the summer months, feeding them was never a problem: they were all fish lovers and especially liked tuna, swordfish, sardines, fresh anchovies, monkfish, cap roig, squid, cuttlefish and anything else from the Med that I grilled or deep-fried for them.

Everyone adored, more than anything else, tuna and swordfish steaks. That was partly because both were difficult to find in Scotland or England in those days and, when available, they were rather expensive.

The tuna and swordfish steaks suited me nicely because there was always plenty of both at the Mercat d’Olivar — and they were an easy-peasy lunchtime dish.

I always sautéed the steaks in butter and olive oil over a high heat for two minutes on each side. My big Le Creuset frying pan could take six steaks at a time, so the logistics were no problem. I served it with a simple salad or atop tumbet or ratatouille at room temperature.
I always did a variation on the gazpacho theme as a starter — and dessert, by popular request, never changed: every time it was melon and watermelon. Never has doing lunch for six people been such a doddle.

Tuna has such a rich meaty flesh in looks and in texture, that is is called buey de mar (ox of the sea) in Spanish. If displayed at a butcher’s you’d take it for meat.

It was once so popular in Spanish monasteries during Lent and days of abstinence, when meat was off the menu, that it became known as Carthusian beef.

Although I have always done my tuna and swordfish steaks as described above, both are also excellent when chargrilled as they are enhanced by the smoky aromas. The steaks also benefit from being marinated in plenty of virgen extra olive oil. Baste the tuna steaks with this oil while they are being chargrilled.

The Basque Country, Catalonia and Andalusia are the three areas of Spain where you find the best tuna dishes, especially along the coast. Many of them are simple basic dishes, the kind that can be easily cooked by fishermen at sea.

The most famous of the Basque tuna dishes is marmitako, a stew that features mainly chunks of tuna and potatoes. The Basque restaurant Azabache in Avda Argentina 49 (Tel:971-222461) does a good marmitako as the dish of the day on Thursdays.

A well-known Catalán dish is putaco tarraconense in which tuna is cooked with onions, red peppers, tomatoes, courgettes, potatoes and snails with the final addition of a picada made with garlic, saffron, parsley, toasted almonds and vino rancio, a rancid red wine used as a flavouring.

Andalusians cook tuna with finely sliced onions (atún encebollado) which keep the fish moist and succulent. The onions are sautéed until soft and golden and the tuna (cut in steaks or nuggets) is quickly seared in another frying pan and finished off in the onion mixture. Rabbit cooked this way is a popular dish all over Spain.

In Andalusia you’ll also find large pieces of tuna that are roasted in the oven after being larded —just like a piece of beef. The larding is done with small pieces of anchovy or salted pork fat. Iberian cured ham, that great Andalusian speciality, is also used for larding a tuna roast. It gives the tuna a very special flavour and is worth trying. I’ve never seen this dish in any restaurant here but it’s an easy one to do at home. It simply needs careful timing, which depends on the thickness of the tuna. 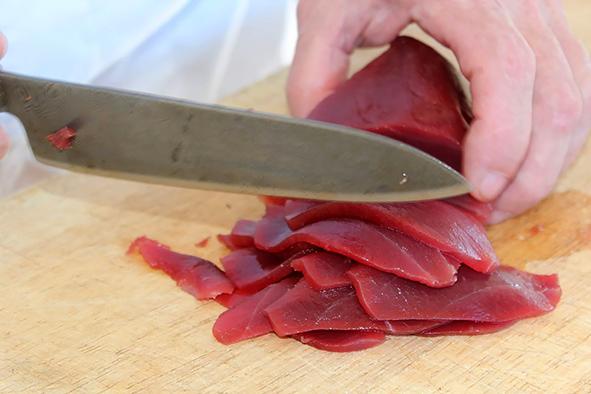 At the fish counter of El Corte Inglés on Sunday there was a very nice piece of tuna that would have been ideal for roasting. It was selling at €19.95 a kilo.

Tuna has become so popular that most of us are inclined to forget about swordfish, which in Spanish is called pez de espada or emperador. Raw tuna has the colour and texture of beef, but swordfish, with its fawn hues and finely grained flesh, reminds of us milk-fed veal.

Swordfish is found in the Atlantic and Pacific oceans as well as in coastal areas all over the world and it is common in the Mediterranean. It is in season here from July to November, so it will be at its best for the next five months. 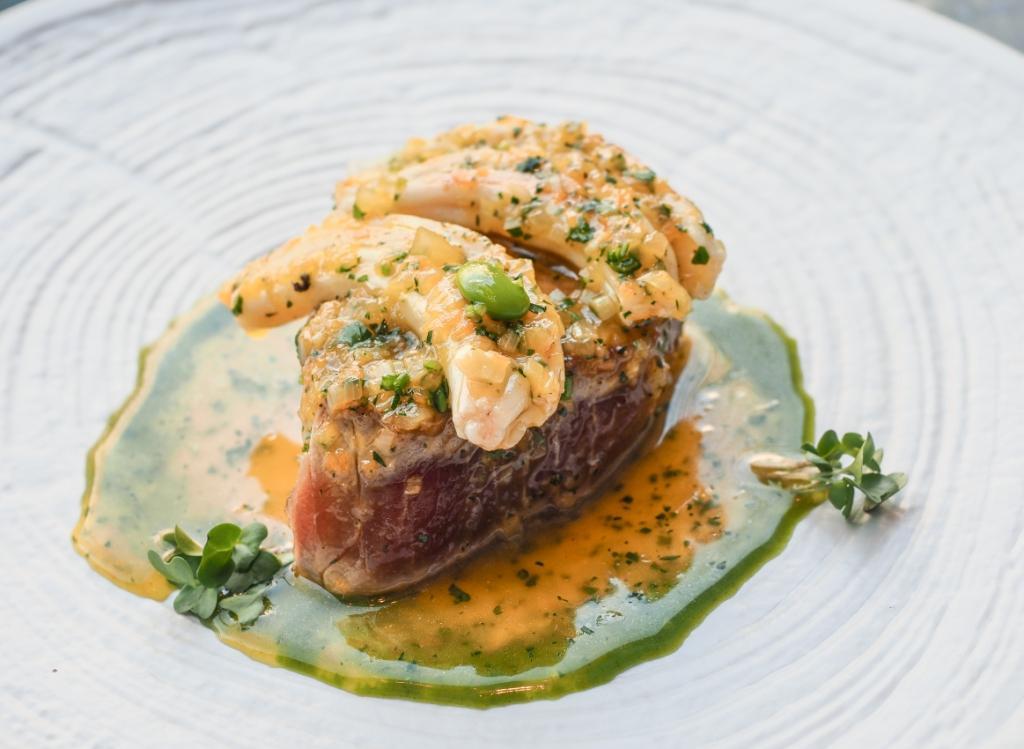 The swordfish is one of the great mysteries of the deep because marine biologists know little about it. It is one of the sea’s great loners, living in the deeper parts during the day and going up to the surface at night to feed.

It is such a strong and ferocious enemy that many fishermen consider it to be the sea’s number one killer. It takes on the big mammals, frequently attacking whales, dolphins and porpoises.

It will ram and penetrate these mammals with its long protuberance, but it seldom uses it as a sword when feeding. It prefers to swim into shoals of smaller fish, lashing out in all directions with its sword and stunning or killing its prey, which it then gobbles up.
The flesh of the swordfish is firm, oily and well flavoured. At the fish counter of El Corte Inglés supermarket last week, it was selling at €13.90 a kilo, which is a good price.

This was a biggish chunk from which good looking steaks could be cut. This is the best way to buy steaks. At other supermarkets, swordfish steaks (if they have them) are often cut and packaged and they are usually on the thin side.

But just like a beef steak, swordfish and tuna are best when cut thick and they should never be overcooked. Swordfish and tuna steaks can be pan-fried, grilled or done on a hot plate, although they are at their best when barbecued — but only if the cook knows how to use a chargrill. It’s all too easy to make a complete mess of a beautiful swordfish steak when grilling it on a barbecue. 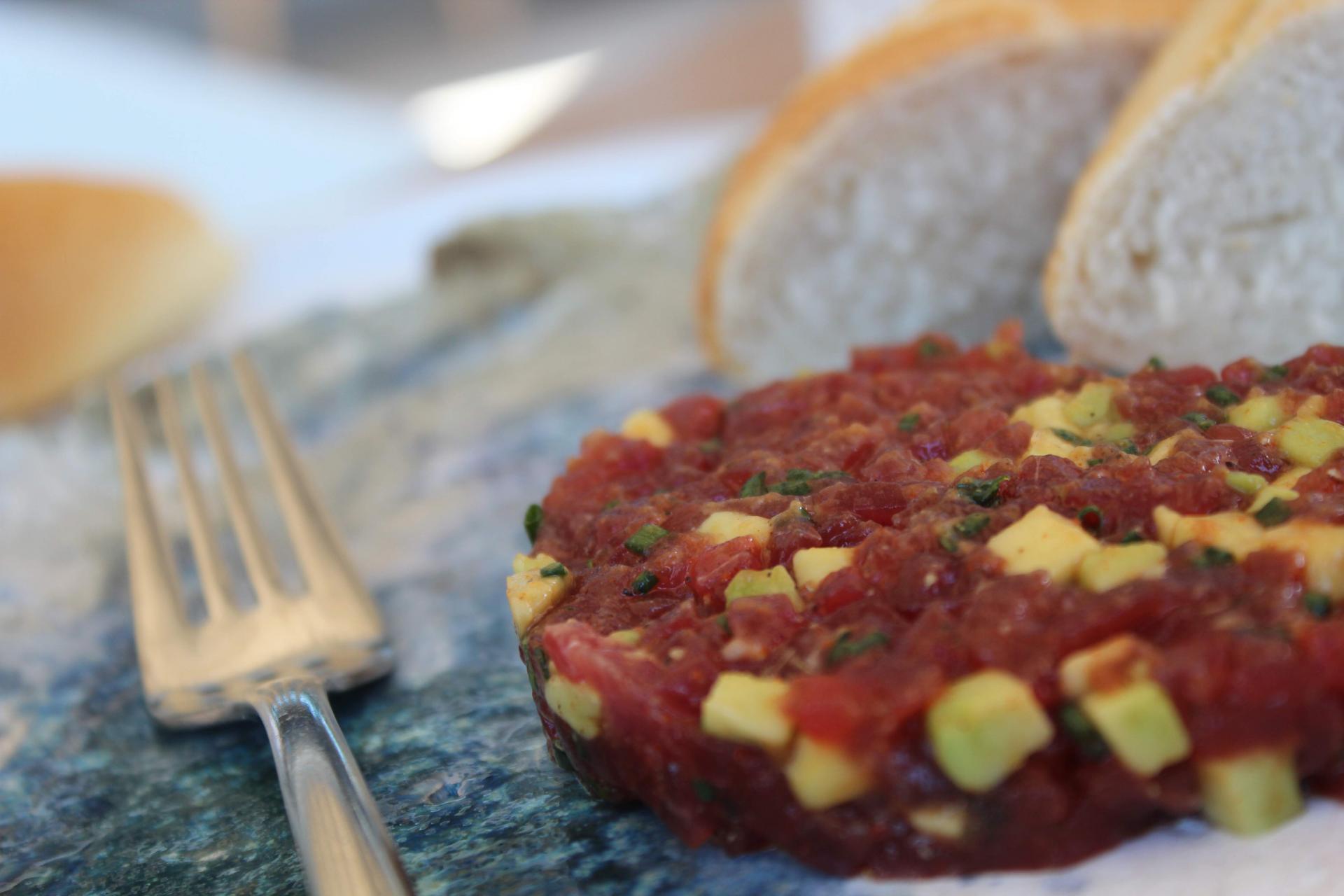 The first step, no matter how we apply the heat, should be to rub the piece of swordfish with butter or olive oil, although many cooks prefer to marinate it for an hour.
Either way, the swordfish is inclined to dry out, so it must be basted frequently with butter, olive oil or its marinade. Swordfish flesh is so delicious that good cooks don’t want to mess about with it too much, so marinades are kept as simple as possible.

The Greeks prefer to marinate it only in olive oil and lemon juice, and sprinkle it with fresh thyme as it cooks. The Turks don’t use a marinade but generously baste the swordfish with olive oil as it cooks.

When nuggets of swordfish are being grilled on skewers, Turks first marinate them in olive oil, vinegar and herbs. Lemon juice is squeezed over the swordfish when the skewers are on the plate.

If swordfish steaks are grilled or sautéed in butter, you can serve them with pats of butter well flavoured with lemon juice, fresh thyme or parsley. When cooked and plated, you can also moisten the steaks with beurre noisette, made by heating butter in a small frying pan until it is of a delicate brown colour. Another way of doing swordfish uses freshly ground black pepper. Coat the steaks with flour and grind over black pepper to taste on both sides. Press the pepper into the fish with the heel of your hand.

Drizzle the surface with olive oil and sauté in butter until nicely browned on both sides. The cooking time will depend on the thickness of the fish. When the fish is done to your liking, salt it to taste and transfer to a serving dish.

Add a little more butter to the frying pan with 50 mls of white wine or sherry. Stir it vigorously over a very high heat for one minute and spoon it over the fish. Serve it with boiled new potatoes or the Mallorcan patató.

An interesting variation on this recipe is to use snipped rosemary spikes instead of black pepper. Rosemary gives a most unusual flavour to swordfish when cooked this way.
Although boiled new potatoes pair beautifully with grilled swordfish steaks, they are even better when served with succulent Mediterranean dishes made with tomatoes, onions, garlic, red and green peppers, aubergines and courgettes.

That means serving them with Spain’s strips of roasted red peppers well dressed with virgen extra olive oil, Mallorca’s tumbet, the French ratatouille or Sicily’s caponata, a mélange of sautéed diced aubergines, onions, tomatoes, capers, olives and anchovies.
The beauty of these dishes is that they are cooked in good amounts of olive oil and that, plus the succulence of the vegetables, adds lubrication, thus counteracting swordfish’s tendency to dry out unless cooked carefully.

When grilling swordfish steaks, some cooks prefer to use a barbecue sauce instead of a marinade. A typical one is made with 10mls soy sauce, 2 freshly chopped garlic cloves, 4 tbsps ketchup, 2 tbsps lemon juice, 2 tbsps chopped parsley, 1 tsp oregano, 100 mls fresh orange juice and freshly ground black pepper to taste.

Mix the ingredients in a big deepish dish and leave the swordfish steaks to marinate for two hours. Brush the steaks with this mixture while they are being chargrilled or done on a hotplate. This is a robust hearty dish that can be paired very nicely with fried white beans.

Biggish thick swordfish steaks can also be baked in the oven. Dust two steaks of about the same size and thickness with flour and drizzle them with virgen extra olive oil. Put one in a well oiled baking dish and sprinkle it generously with finely chopped fresh dill and a layer of thinly sliced onion previously sautéed until soft and golden. Dot with snippets of butter and season to taste with salt and pepper.

Place the second steak on top and cover it with sliced onions and dill and dot with butter. Pour 50 mls of white wine or sherry into the oven dish and bake at 220C for 15-20 minutes, depending on the thickness of the fish. Be sure to baste the fish several times during cooking time.

Transfer the fish to a hot serving dish. Add another 50 mls of white wine or sherry to the baking pan and bring to the boil. Gradually stir in 250 mls of thick cream well mixed with three egg yolks. Stir over a lowish heat until well thickened and smooth, but without letting the sauce come back to the boil or it will curdle. Pour this sauce over the swordfish steaks and serve.

If someone were to cook this dish for me I would eat it with relish and interest, especially if it were served atop buttered basmati rice or fresh spaghetti or fettuccine.

But I wouldn’t want to make it myself. I think marinated and grilled swordfish and tuna steaks are perfect dishes — and I never mess about with perfection.