The Origin roof top bar in Palmanova is hugely popular and has an incredible sea view. The owners have just teamed up with German owned Greeny+ and they’re creating sustainable gardens in plant towers that can grow fruit and vegetables, cheaper and much faster than on land. 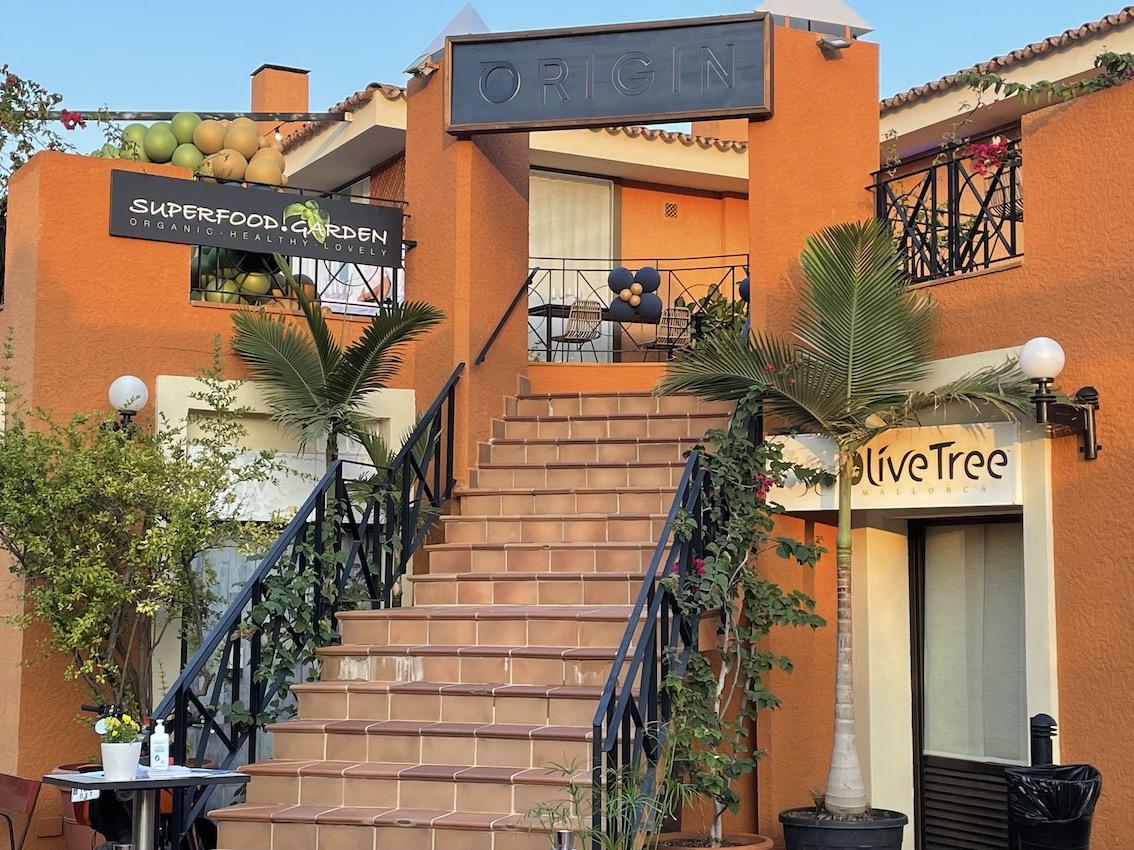 Origin co-owner, Mark Whiteside moved from Glasgow to Mallorca a few years ago to work at the Olive Tree in Palmanova for 6 months, but after spying a gap in the market he decided to stay and launch Origin with business-partner, James Wood who's from Hull.

They are over the moon about the new partnership and say Greeny+ is a perfect match for Origin.

“Our original plan was to have a bar with a roof garden and have pilates and yoga classes, so for Uli to come up with this idea seemed like a weird joke, because it was exactly what we had in mind,” laughs Mark.

The organic towers at Origin are already overflowing with fruit and vegetables, but Mark says there's still a lot to consider. 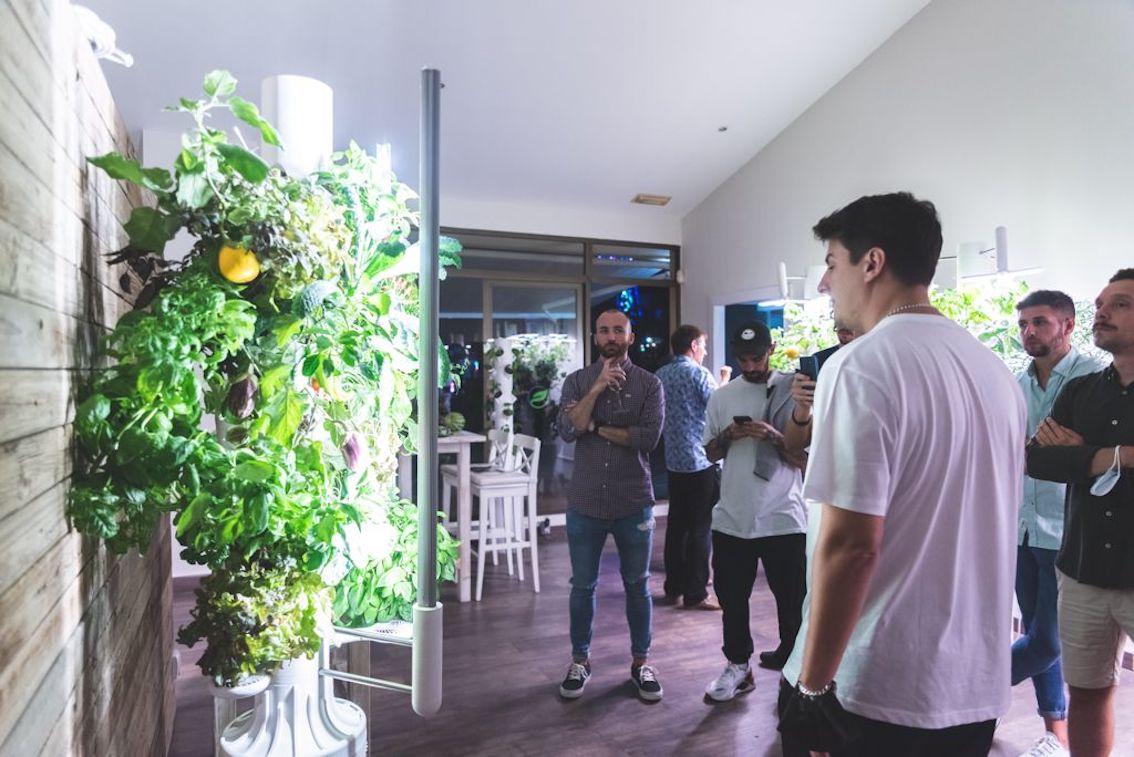 "The towers are amazing, they’re made from milk lactose filament and contain zero plastic, so they’re completely biodegradable and they also use 75% less water than conventional growing methods,” he explains. "Small herbs and spices are ready to use after three weeks and things like cherry tomatoes are ready in 4 weeks. We are testing about 30 different products at the moment, including aubergine, peppers, basil, mint, limes, blueberries and raspberries and the intention is to dedicate a certain number of towers to each plant." 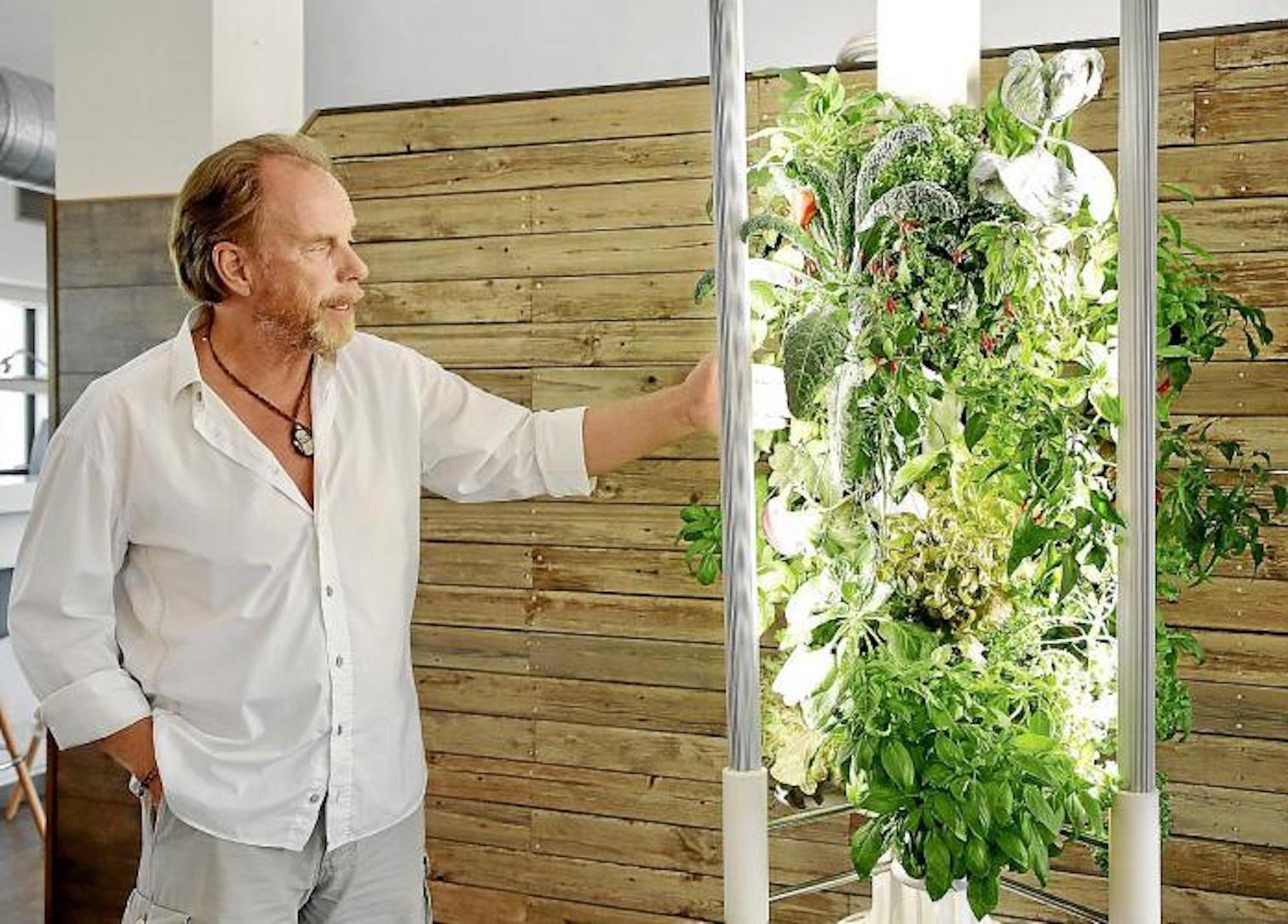 The towers were invented by Uli Schwartau, a German technician who’s lived in Mallorca for more than 20 years.

He came up with the idea in April/May last year during the Covid lockdown and immediately started growing micro-greens, tomatoes and cucumbers and other herbs and vegetables in the towers.

“I wanted to do something for our immune system and that’s why we started the superfood garden at Origin,” says Uli, who believes the towers could revolutionise the future of agriculture. “Micro-greens have up to 40 times more vitamins, minerals and nutrition, so they’re very healthy and good for the immune system.” 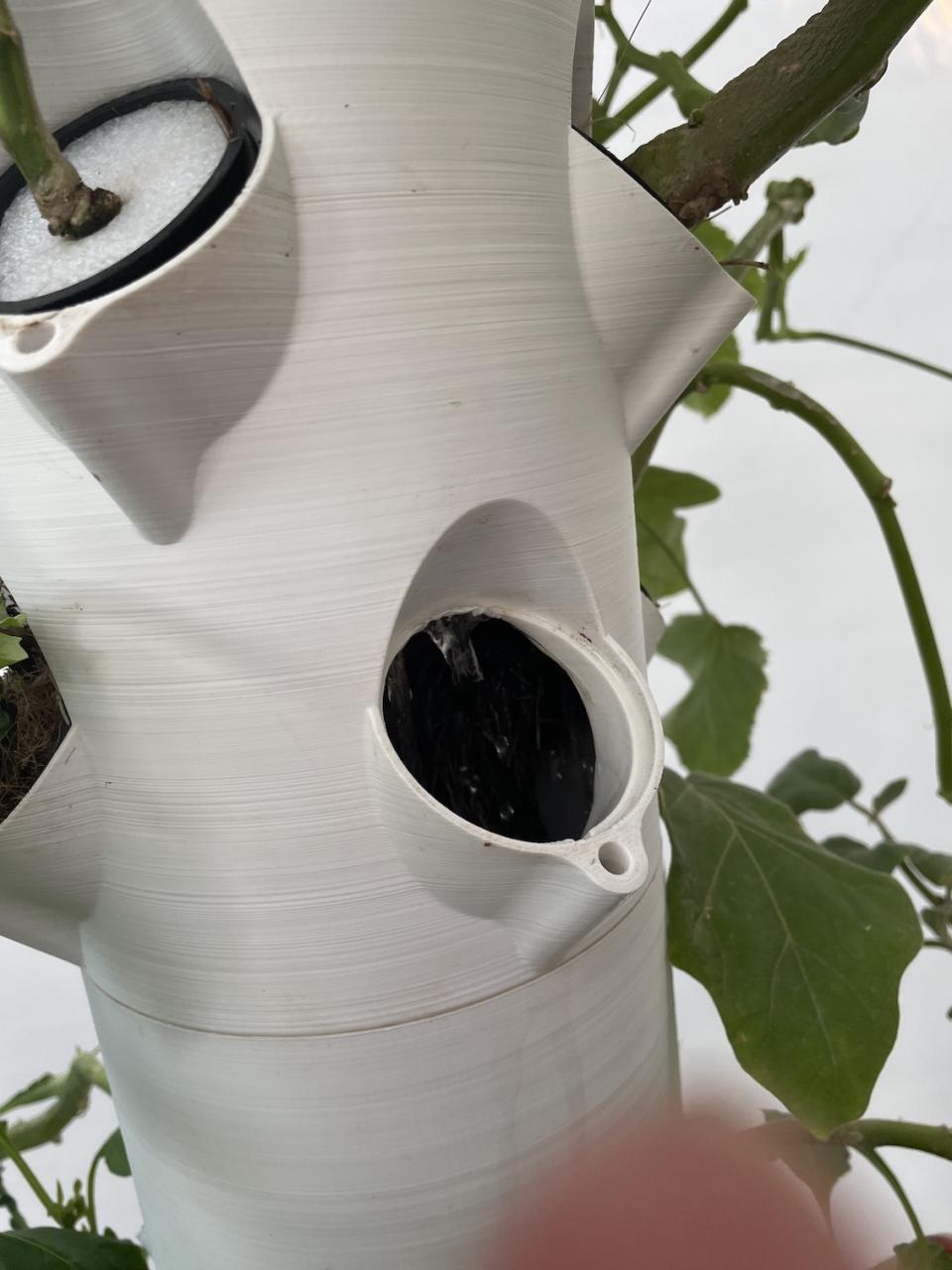 “The Greeny+ garden towers are an aeroponic system, so there’s water in the bottom in a little tank and a few times an hour it comes up the tower to rinse the roots of the plants and we add natural minerals to the water,” explains Uli. “The beauty of this system is that when the water is not running the roots get oxygen, which is crucial and it’s one of the reasons these plants grow six times faster than they would on land.” 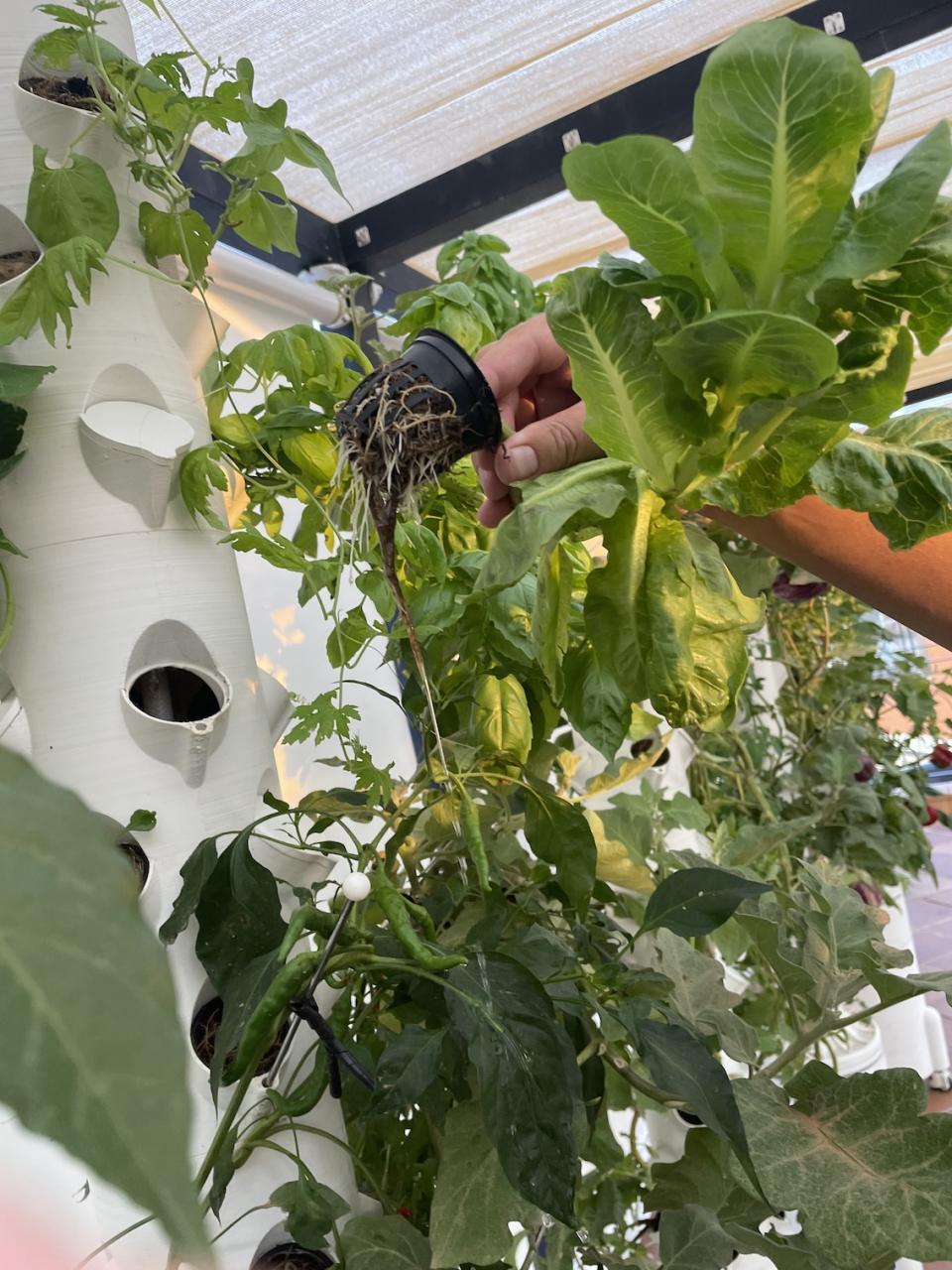 The most fascinating thing about these towers is that they don’t need any earth, because the plants grow in cocoa fibre, so there’s no mess either!

A Greeny+ garden tower will set you back €1,240 without lights and €1,470 with lights and the price includes the tower, the seeds, cocoa fibre and nutrition supplies for one year. 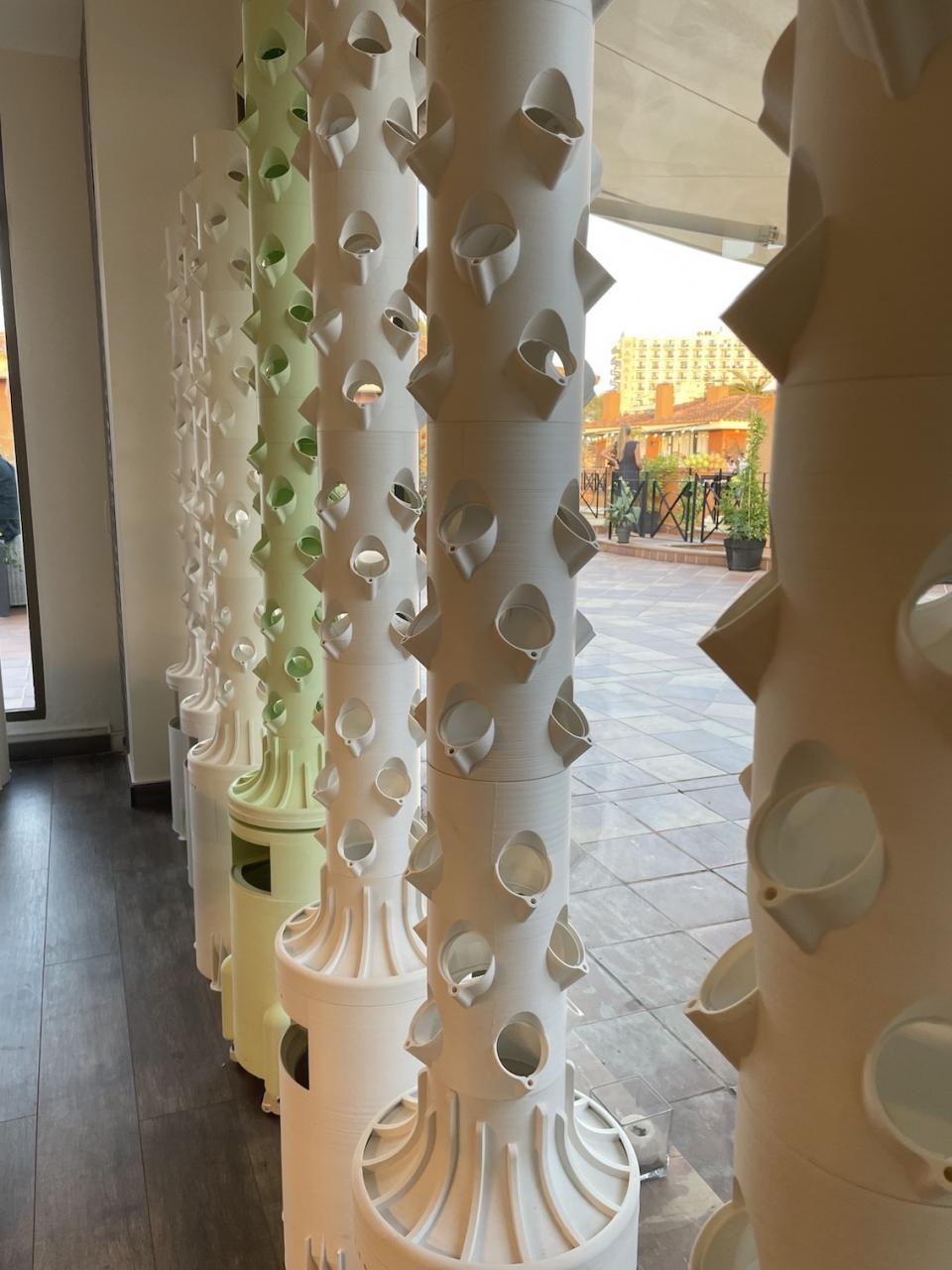 Uli is constantly thinking of new ways to use the towers and is working on a couple of really cool ideas.

“We will be making a smaller tower for salads that will fit on the kitchen counter or on a desk at work, so people can pick the leaves and have them for lunch,” he explains. “I've also invented a greeny garden for mushrooms and for truffles and one that can grow potatoes without soil, so you can pick potatoes like apples from a tree. 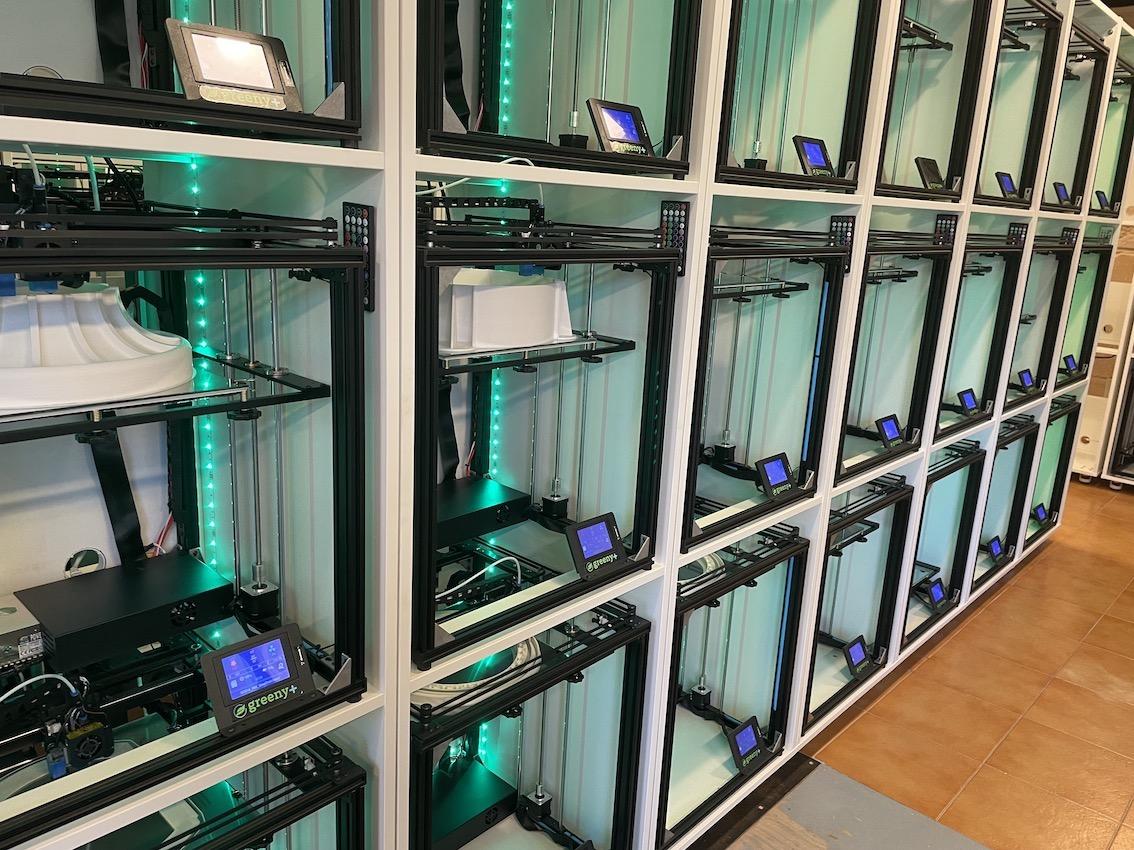 These biodegradable planters are produced downstairs at Origin, where there's a room stacked with more than 160 3D printers churning out the towers piece by piece and once they’ve been assembled they’ll be stuffed with fruit and vegetables that will end up on customer’s plates in a matter of weeks. 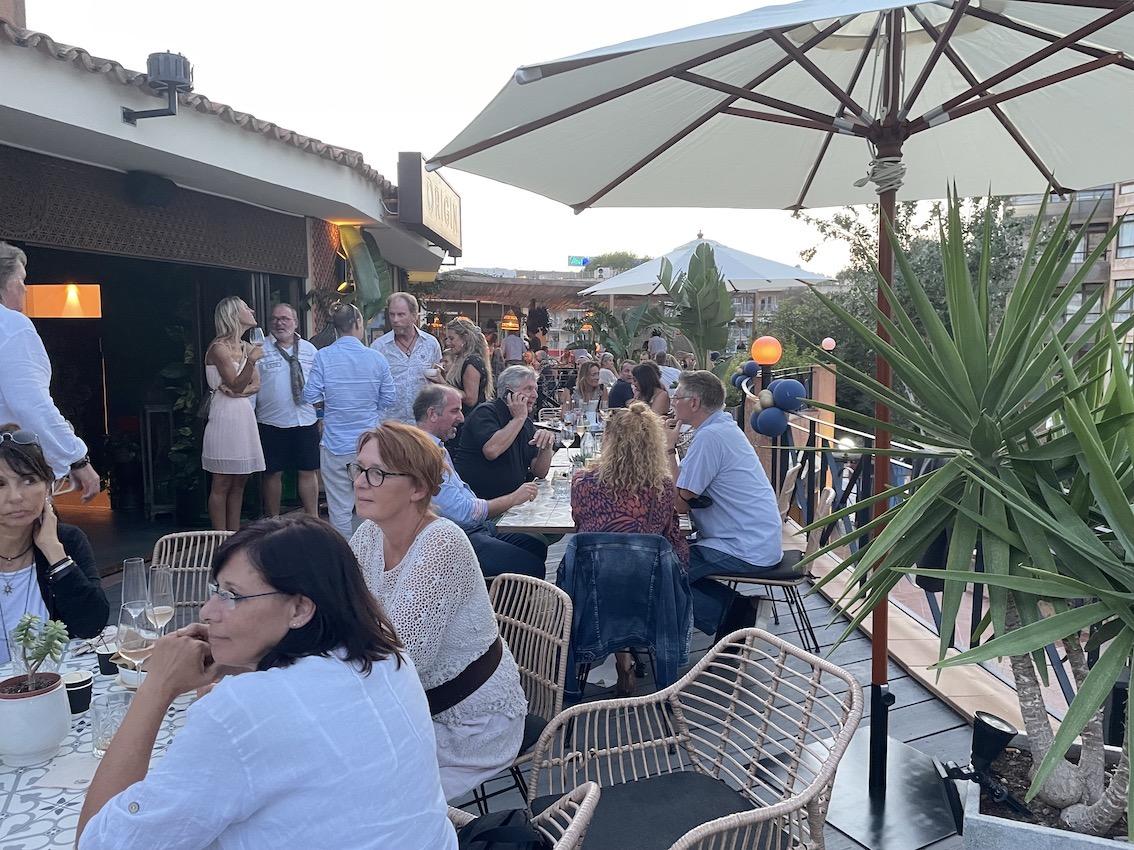 Mark is determined to use as much local produce as possible and not only does Origin have its own farm in Calvia, he's struck a deal with a group of local farmers to supply all of the beef, pork, lamb and milk Origin will need.

Mark buys in craft beer from Adalt in Palma and has linked up with the British owned company, Palma Gin, which has already won a raft of awards and just scored 3 stars at the Great Taste Awards. 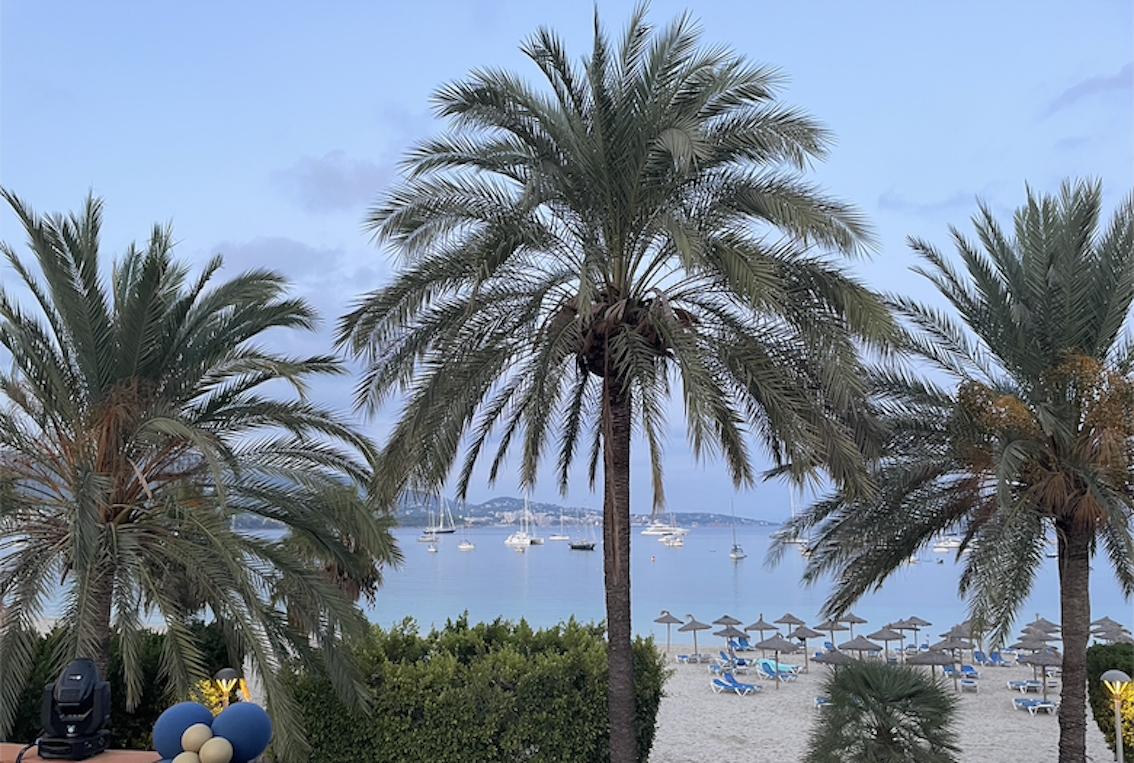 Customers will be able to enjoy the spectacular sea views at Origin until December 31 and Mark is already planning to hold Make Your Own Mojito Classes, Gin Masterclasses and Food Workshops and attendees will be able to pick their own garnishes and produce from the Greeny+ towers. He also wants to invite school children to Origin to learn about composting and soil and how to grow stuff that they can keep tabs on as they mature. 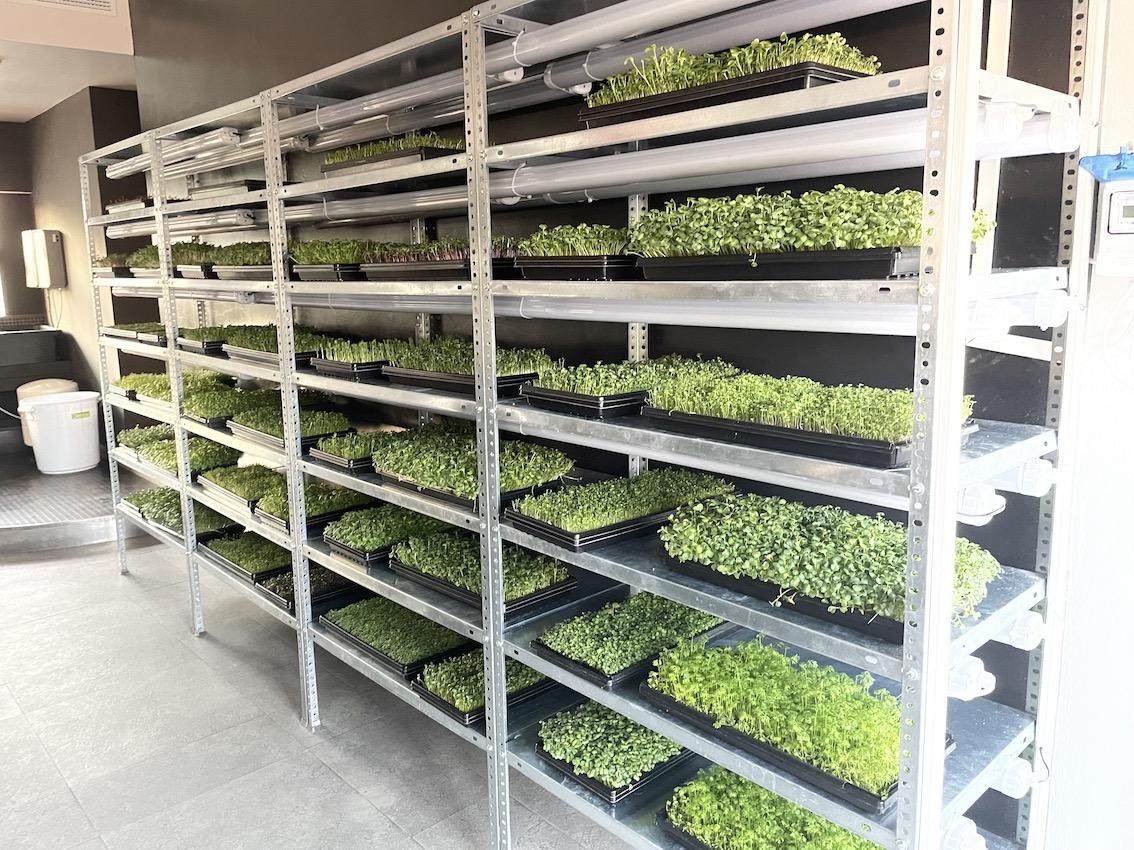 Next year Origin will be open for breakfast and brunch serving fresh eggs and vegetables from the Origin farm in Calvia and herbs and salads that are grown on the terrace in Palmanova. 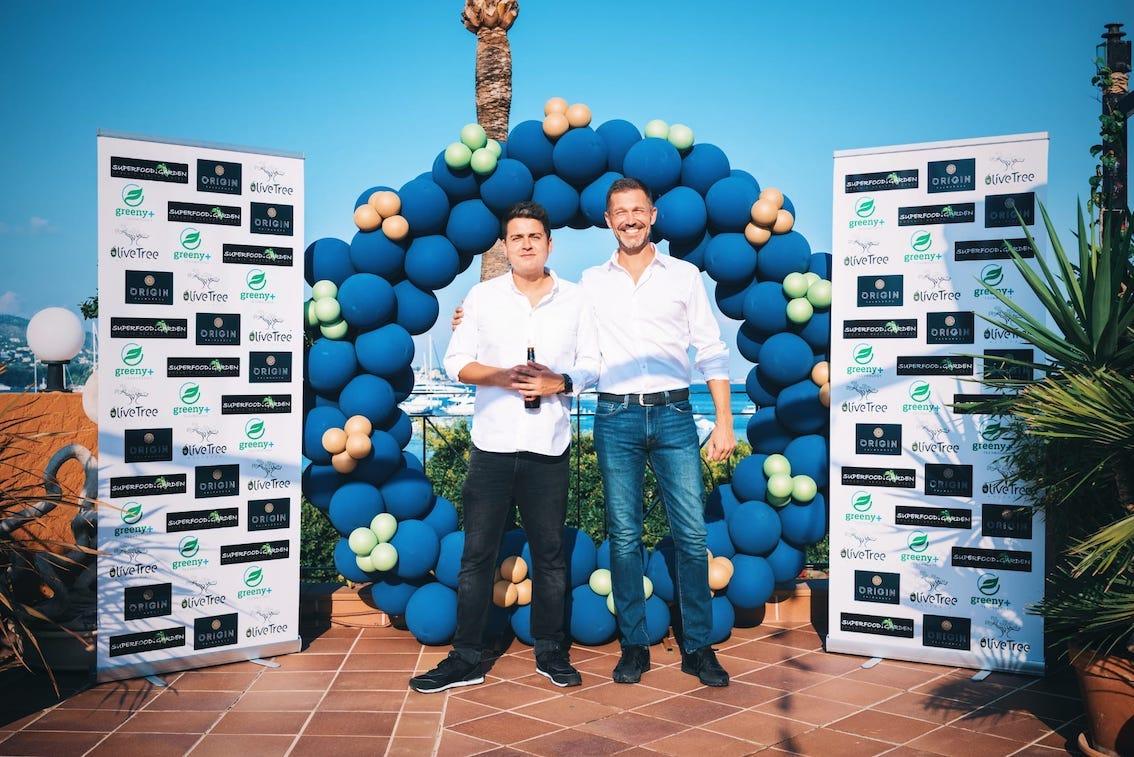 After the sheer hell that Covid wreaked on businesses all over Mallorca, Mark and James are counting their blessings that things are finally on the up and up.

“Covid was horrendous for so many business owners, including us and now all of a sudden, we’ve been offered this opportunity and a great partnership, so it’s very exciting.”