The Olive tree, is an evergreen giving a vast variety of fruits

Wherever you go on Mallorca, you will see Olive trees, either from the roadside in the vast groves or on the terraces erected on the mountain slopes. They are an iconic sight and are steeped in history, with records of oil being produced as early as the 13th century with its heyday in the 19th century, when Oive oil made up 80% of Mallorca’s exports, producing over 100,000 litres of oil annually.

Some of my favourite Olive trees can be found in Alaro near the Es Verger mountain restaurant, where there are some ancient, gnarled trees, packed with character. I often wonder what history these trees have seen. There is also one particular old tree on a section of the Albufereta back roads, which always makes me stop to take a look.

Here,we have two kinds of extra virgin Oive oil, one a fruity oil and the other a bitter and spicy flavour. There are three varieties here - Mallorcan which is mild and sweet, Arbequina which has a raw flavour, and Picual which is the spicy and bitter one, one of my favourites. Olives are very good for you as they can help to strengthen bones by limiting the loss of calcium.

Vitamin E is also present which can absorb free radicals, notorious for their damaging effects on the human body. But to be honest, when I am sat at a traditional bar in one of the villages, watching the world go, listening to the chirping of the House Sparrows close by and the ‘screaming’ of Common Swifts over the roof tops, the health properties are the last thing on my mind.

I am instead savouring both the taste and the characteristic atmosphere around me. I love it whilst waiting for my food to arrive and they bring over a bowl of Olives to tuck into while you wait, and sometimes there is a mix of them which is great. I like to support the local shop or market when buying Olives, and try to find those labelled ‘Oli de Majorca’, an organism that controls its quality.

Shops, supermarkets and fruit and veg shops all sell a variety of Olives, but for me, nothing beats seeing them on the market stall in their different varieties, enticingly laid out before you, with the offer ‘try before you buy’. It is such a lovely feature seeing them laid out like this and I can never resist trying some.

Olive groves are packed with character, and wildlife too. Rabbits can unfortunately cause some damage to young trees where they eat the bark. Voles and Mice also do damage by eating the roots of Olives. During the hottest parts of the day, look carefully at the base of the trees as often the Stone Curlew will be huddled up close taking advantage of the shade.

Occasionally, a group of Red-legged Partridges may be present and the canopy will be visited by insect eating birds such as Pied Flycatchers, Common Redstarts, Blackcaps, Wood and Bonelli’s Warblers amongst others, and even the islands smallest resident, the Firecrest will be having a go.

Mallorca’s only species of woodpecker - the Wryneck is regularly found in Olive groves, well heard at least, as their cryptic plumage blends in so well with the bark of the trees. Open groves may well see the resident Thekla Lark feeding on the ground and on occasion the summer-breeding Short-toed Lark too. My favourite bird can also be fond of the groves, more on that later. 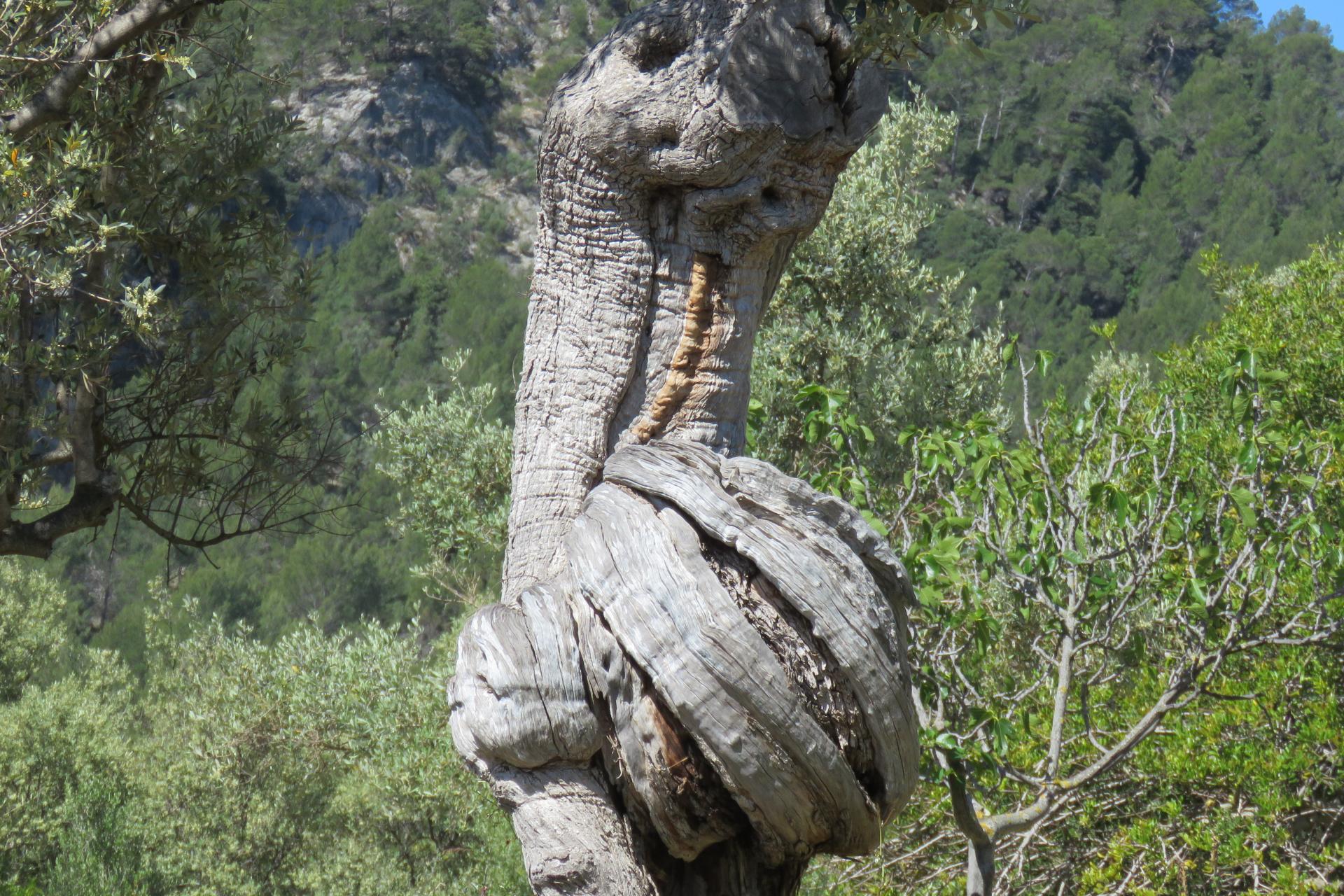 The Olive tree (Olea europaea), is an evergreen giving a vast variety of fruits. Drought resistant, very hardy, fire resistant and to an extent, disease resistant, the strong root system can regenerate if need be if the tree above ground is destroyed. What I love about them is that the older they are, the thicker their girth and the gnarled appearance that gives them that really-old look comes into its own.

The production of Olive oil here played a key role between the 17th and 19th centuries, as a barter product (in exchange for wheat for example) and export product and in the diet of the inhabitants. Their colour also has some significance, varying from greenish-yellow to golden-yellow. Rarely exceeding 26-49ft in height, this generally short but stocky looking tree produces white, feathery-like flowers.

When I was on my way to the salt pans in the south, I used to stop at the famous Olive shop on the outskirts of Felanitx (for those that can remember,the dinosaur models were present outside too). I bought a number of items and watched through the viewing glass how they made the different objects made purely from Olive wood. In all the times I stopped off there, I always came away with at least one item.

A staggering 90% of the Olive trees here will be at least 500 years old, can you just imagine the history they have seen?. Olives known as ‘trencadas’ are the classic variety here, so called because they literally break open after being struck. We get the word ‘Olive’ from the Latin ‘oliva’ - olive fruit or olive tree, and Classic Greek ‘elaia’ - olive fruit / olive tree.

The word oil, ‘oleum’ originally meant ‘olive oil’. The dark-skinned variety (moradas) - a word that also means ‘bruise’ are much loved here as is the favourite green variety (trencades) - a word that means split. They are cracked open with a small stone, cured in brine which allows the salt solution to penetrate into the heart of the Olives flesh, and this makes them ready for eating sooner.</p

The islands favourite black Olives seem to be the variety called ‘panssides’ - which are left to ripen allowing the skins to become wrinkled. Throughout Spain there are 300 million Olive trees and the fruit (also called an olive) is a major agricultural resource and one of the core ingredients in the cuisine here. The plant family also includes species such as Lilac, Jasmine and Forsythia, and fossil evidence indicates they have origins dating back to 20-40 million years ago in the Oligocene.

Some Olive groves have seen the soil between the rows constantly turned over by either a rotavator or small tractor. I think that leaves the soil exposed to wind erosion, whereas any weeds or grasses can be removed from around the base of the tree if necessary?. To me, a wildlife and environmentally orchard is one that has weeds and flowers left growing in the rows, not just adding some colour, but providing a valuable food source to Bees and Butterflies, and a variety of insects that in turn attract a great variety of bird species - including my all time- favourite - the Hoopoe, with its iconic plume of feathers on its head, its moth-like bounding flight and black and white wings.

So, the next time you see an old looking Olive tree, stop and look more closely, imagine what history it has lived through, what wildlife has used it, the changes it has endured and most of all, admire the gnarled, twisting bark from many years of growth.