They were in a big stew for Xmas - and loved it

There are many ways of celebrating Christmas and I’ve come across a few of the more unusual ones — those who do it on a shoestring and others who (some 30 years ago) took out a £3,000 bank loan to cover expenses for Christmas and new year celebrations — and then spent the next 10 months paying it back.

One of the most curious cases was of a couple who had had a poverty-stricken childhood that meant no frills whatever for Christmas. They both ended up with well-paid jobs (he was head of the patents office of a big multinational and she was a highly-paid glossy magazine and book illustrator) and they spent vast sums of money on all 12 days of Christmas.

Starting with a late family lunch on the 24th, they put on magnificent spreads for family and friends on alternate days. Main course dishes included goose, whole suckling pigs sent over from Madrid via Harrods, poularde and capon from Bresse, the best venison and game birds from Scotland and some of the finest wines, champagne, whisky and brandy being drunk in London during the festive season.

Over the 12 days of Christmas they never visited any members of the family or their best friends — they wanted everyone to come to their home to see what wonderful Christmas feasts they could put on. It made up for the bitter memories of bleak Christmas days during those years of dire poverty.

At the other end of festive season meals were those lunches of a German friend in Palma who had a son and daughter in their late teens and early twenties.

Although she thought nothing of picking up a limping stray cat and taking it to the vet and paying 10,000 pesetas (a lot of money 40 years ago) for having its leg treated, she had never participated in Christmas celebrations nor did she spend much time or money on festive fare — which was most unusual for a German.

She had a simple solution for their meals on Christmas Eve, Christmas Day, Boxing Day and the day after. She made a huge pot of what sounded like a superb stew — and that was it for those four days.

She made the stew with the usual onions, leeks and vegetable sofrito and instead of adding water, stock or wine she used a black German beer if there was one at her local supermarket. If not, she settled for any other kind of dark beer including Guinness and other Irish or English stouts.

I never got to taste this stew but I am sure it would have been excellent and would have made a delicious English steak pie. I offered her one of my English pie dishes, the old fashioned enamelled ones with a wide rim for getting a nicely raised edge, but she had simpler ways of ringing up the changes. 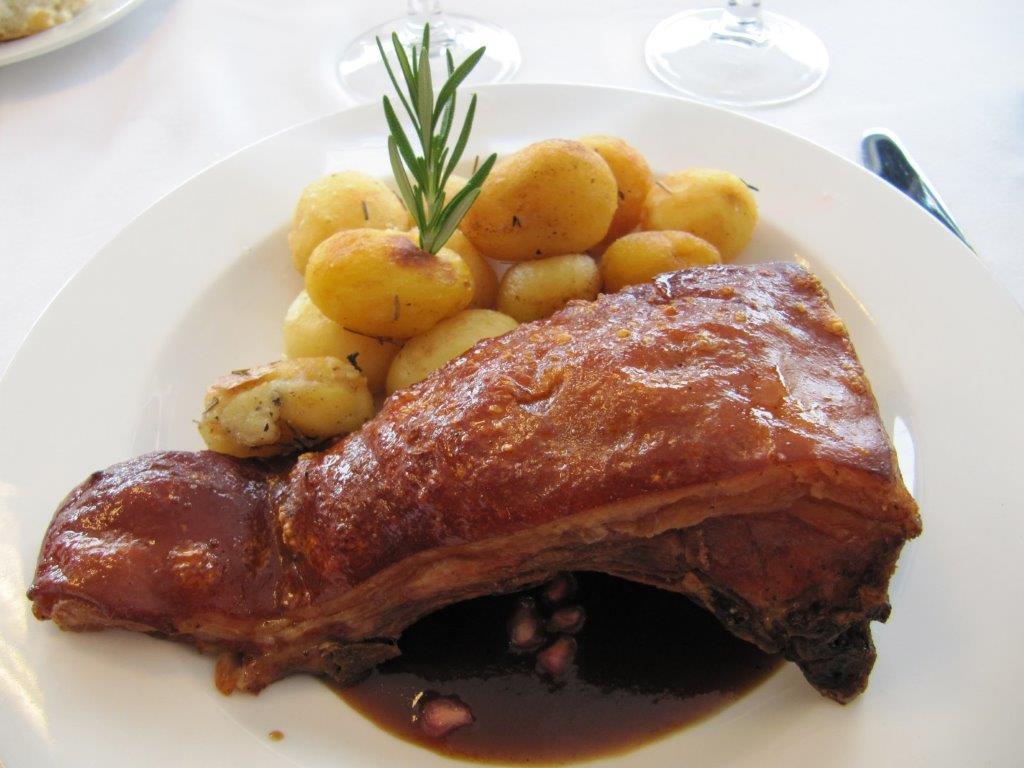 The family favourite was mashed potatoes, but she also did boiled or deep-fried patató (the Mallorcan potato the size of a walnut) as well as fluffy long grain rice. On one of the days she did spätzle, the German pasta that can be in the shape of tiny dumplings or like short broken noodles.This festive stew was the family’s favourite meal and it was also used for birthdays and other celebrations of any kind. As she said one year: “It’s one way of celebrating Christmas.”

As one who has celebrated Christmas Eves past with homemade fish and chips and Christmas Day lunches with pigs’ trotters, I could hardly disagree.My German friend knew a thing or two about good cooking, and she was well aware that a fine stew needs a longish time on a very low heat. She was also very careful about reheating the stew that was made to last for four days.

On the first day, the meat was à point and ready for eating. On day two she took out of the big pot the amount she needed and reheated it until very hot. That way the meat never overcooked, stringy and tasteless.In last week’s pages on roasting beef, we saw that meat shrinks and some of the juices are forced to the top, where they ooze out for form a protective tasty crust. Some of the juice also falls into the roasting pan where it is later turned into gravy.

The same thing happens when we stew meat, but in this case the juices go into the small amount of liquid being used, thus enriching it and making it very tasty.Stewing is one of the basic cooking techniques common to all countries. It is more popular in northern climes than in the south, but winters in the south can also be cold, so there are also plenty of southern stews.

It’s the components of the stew that vary. In the north, root vegetables such as carrots, turnips, swedes and parsnips are an essential part of stews. Potatoes are usually cooked in the stew or served separately. In warmer countries, where root vegetables are less common, other ingredients take their place.

In Arab cooking, rice or cous-cous takes over from potatoes and rice is the favourite starch in Asia. It can be cracked wheat, as in the Balkans, or the beloved pasta and polenta of the Italians.

What is common to stews everywhere is that there is some form of carbohydrate to soak up the rich flavours that have been achieved through the judicious use of herbs and spices. At the end of a good stew, the conscientious gourmet uses the greatest staple of them all — bread— to mop up the last delicious drops of succulent sauce.

It is no accident that stews are so brimming with flavour: everything we do to them, from marinating the meat or adding wine to the sauce, is a means of achieving extra layers of taste. If a stew is made with a modicum of care it will be scrummy.

The length of time we cook a stew and the intensity of heat used are most important. For nuggets of meat about the size of a walnut you should allow 90 minutes over a low heat. The best way to good results, regardless of where the original recipe came from, is to cook the meat slowly for a longish time. The low heat will gently soften the connective tissue, thus tenderising the meat.

If the temperature was excessively high, or if the stew was cooked for twice as long as necessary, then the connective tissue would completely disintegrate, leaving us with a mass of stringy tasteless meat.

Spanish cooks make very good stews and if you are ever having a menú del día at a restaurant you don’t know, then the stew (el estofado) will almost certainly be a good bet. The basis of a good Spanish stew is onions and tomatoes sautéed until they are reduced to a jam-like consistency. If you start off with this mixture, called a sofrito, you are well on your way to producing a good Spanish stew.

If you buy a kilo of ‘carne para estofado’ ask the butcher to slice it up if he hasn’t already done so. Supermarket meat for stew comes already cut and packed into a clingfilm-wrapped tray. For a kilo of meat you will need two medium sized onions and four or five ramellet tomatoes. These Majorcan tomatoes are sometimes sold strung together but you can also buy them loose.

You should always peel these tomatoes (they have thick skins) and they are best for cooking because their pulpy flesh quickly turns into an unctuous sauce. 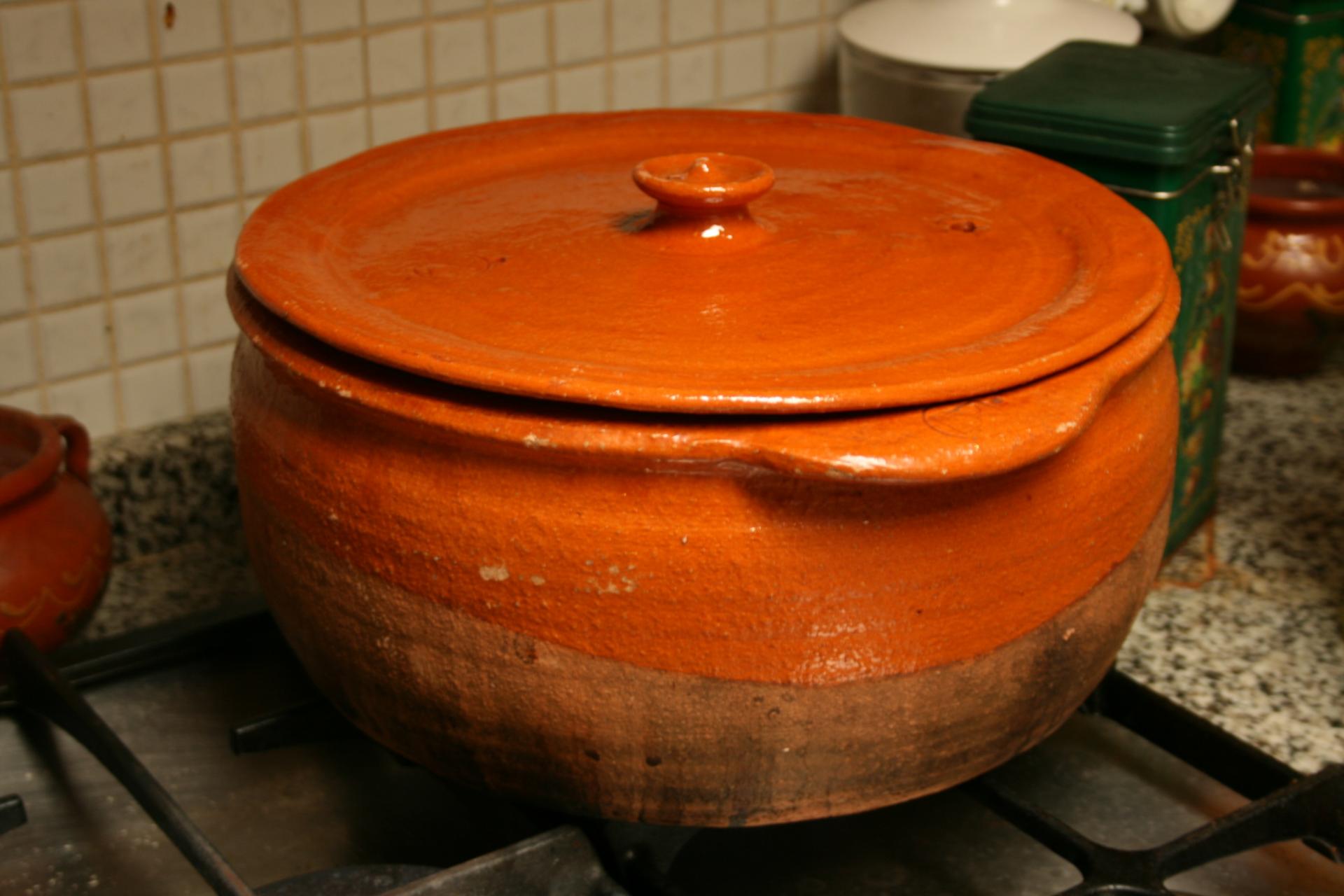 In an earthenware greixonera or your usual saucepan for making stews, heat 75 mls of virgen extra olive oil and stir in the grated or finely chopped onions. Cook over a very low heat for 15 minutes, stirring frequently. Add the chopped peeled tomatoes and continue to sauté slowly for another 15 minutes.

Meanwhile, in a suitable frying pan or wok, heat 50 mls of virgen extra olive oil over a high heat. When the oil is very hot but not smoking, stir in half of the meat and continue stirring until it is well seared. Transfer to a plate and sear the rest of the meat.

When the sofrito in the greixonera is thick and jammy, stir in the seared meat, turn up the heat and add enough red wine to just cover the meat. When the mixture comes to the boil, cover the greixonera, lower the heat and simmer for an hour, stirring from time to time. At this stage add any herbs or spices you are using. The most popular Spanish flavourings are bay leaves and whole cloves. Other good herbs for stews are fresh thyme, oregano or rosemary. Some Spanish cooks like to add a few whole black peppercorns.

Garlic is usually added to a Spanish estofado but in whole unpeeled cloves, not chopped. The cloves of garlic become soft and buttery and extremely tasty.
Real estofado aficionados eat a few cloves of garlic, sometimes squeezing the pulp on to a piece of bread and using it as if it were butter.

After the stew has simmered, covered, for an hour you can add parboiled potatoes and other root veggies if you are using them. Most Spanish cooks I know add potatoes, peas and carrots which give a nice splash of colour to what is an otherwise monochrome dish.
Many Majorcan housewives of the old school sauté the potatoes and carrots in plenty of oil until they are almost fully cooked before adding them to the stew. This makes them more succulent than parboiling, thanks to the extra virgen extra olive oil they absorb.

Spaniards use this method to make estofados out of other meats such as chicken, pork, lamb, rabbit and game of all kinds, including venison and wild boar. Partridge and pheasant, especially the older birds, are often given the estofado treatment. But as a rule potatoes and other root veggies are not added to game estofados.

Apart from the meat known in Spanish as ‘carne para estofado’, there are other cuts that make splendid stews. These include morcillo, the shin meat, the equivalent of the Italian osso bucco. But that’s another page for another day.