The Valencian paella, the Spanish regional dish that has most travelled the world, was in the news on two consecutive days this month.

The official State Gazette published the decree by the Valencian autonomous government that the paella be declared an item of cultural interest for its ‘capacity to unite’.

The decree includes a description of the ‘paella valenciana’ and the different recipes that exist throughout Valencia. It also takes in the cultivation of Valencian rice and how it is harvested.

This study was carried out by researchers headed by the anthropologist Pablo Vidal. I have one little comment to make on the findings of Sr Vidal and his team and several more serious ones. 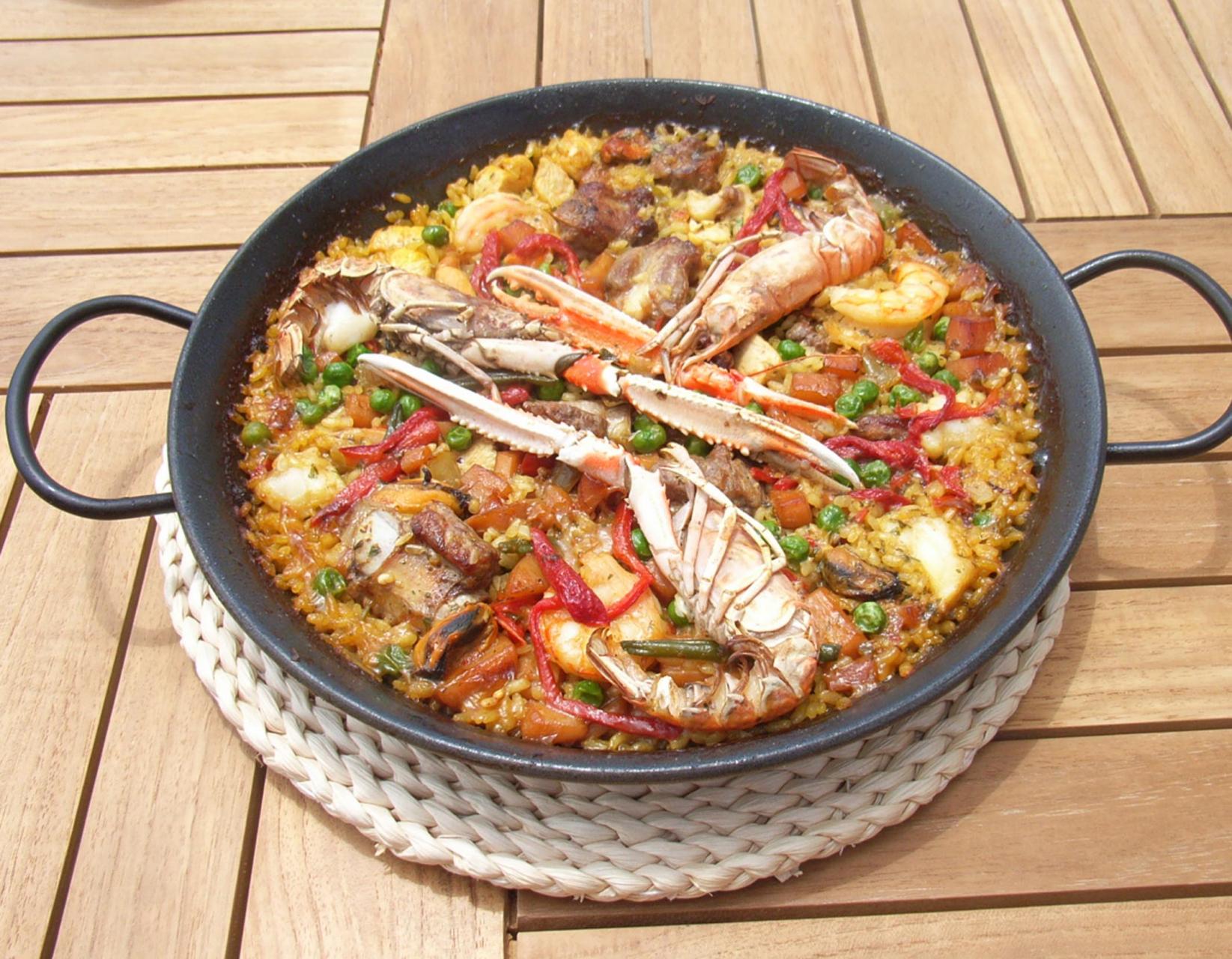 The minor one (or not so minor depending on your culinary standards) is that if a Valencian paella contains ‘colouring’ instead of saffron it is not an authentic paella. That is true whether the paella is being cooked in Valencia or anywhere else in the world.

My more serious complaint is that no one, not even Sr Vidal and his team of researchers, can confirm (‘scientifically’, as they claim) that an authentic Valencian paella contains 10 ‘essential’ ingredients.

In the days when the Valencian paella first came into being all cooking (and, therefore, all eating) was seasonal.

At that time, for instance, chicken wasn’t always available, green flat beans were strictly seasonal (and it wasn’t a long season) and tomatoes had a very definite season that finished with the end of summer.

A Valencian paella was a dish that contained what was at hand. That meant not only what was in season but what could be found for free. 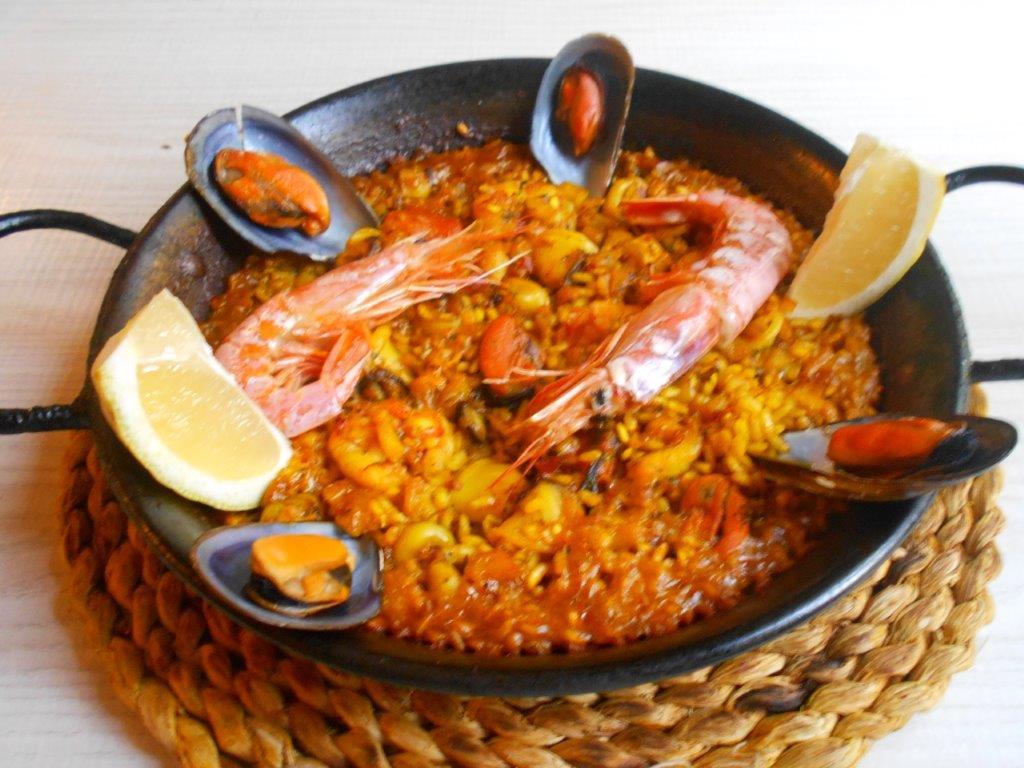 So in paellas and other rice dishes, the researchers should have found that snails, which were collected for free on rainy autumn and winter days, were one of the most popular ingredients all over Valencia.

For the rural poor, snails were an important source of protein that could be gathered by the whole family after the rain had stopped. It was an easy peasy free ingredient.

Snails had another advantage. If a family was especially good at hunting for snails, they could build up huge cache in the autumn and winter and would then have had enough for the whole year.

When spring temperatures start to go up, snails settle down and go to sleep for the hot weather months. They, and some other creatures that sleep during the summer, are said to ‘estivate’. The winter sleepers, like bears, hibernate. 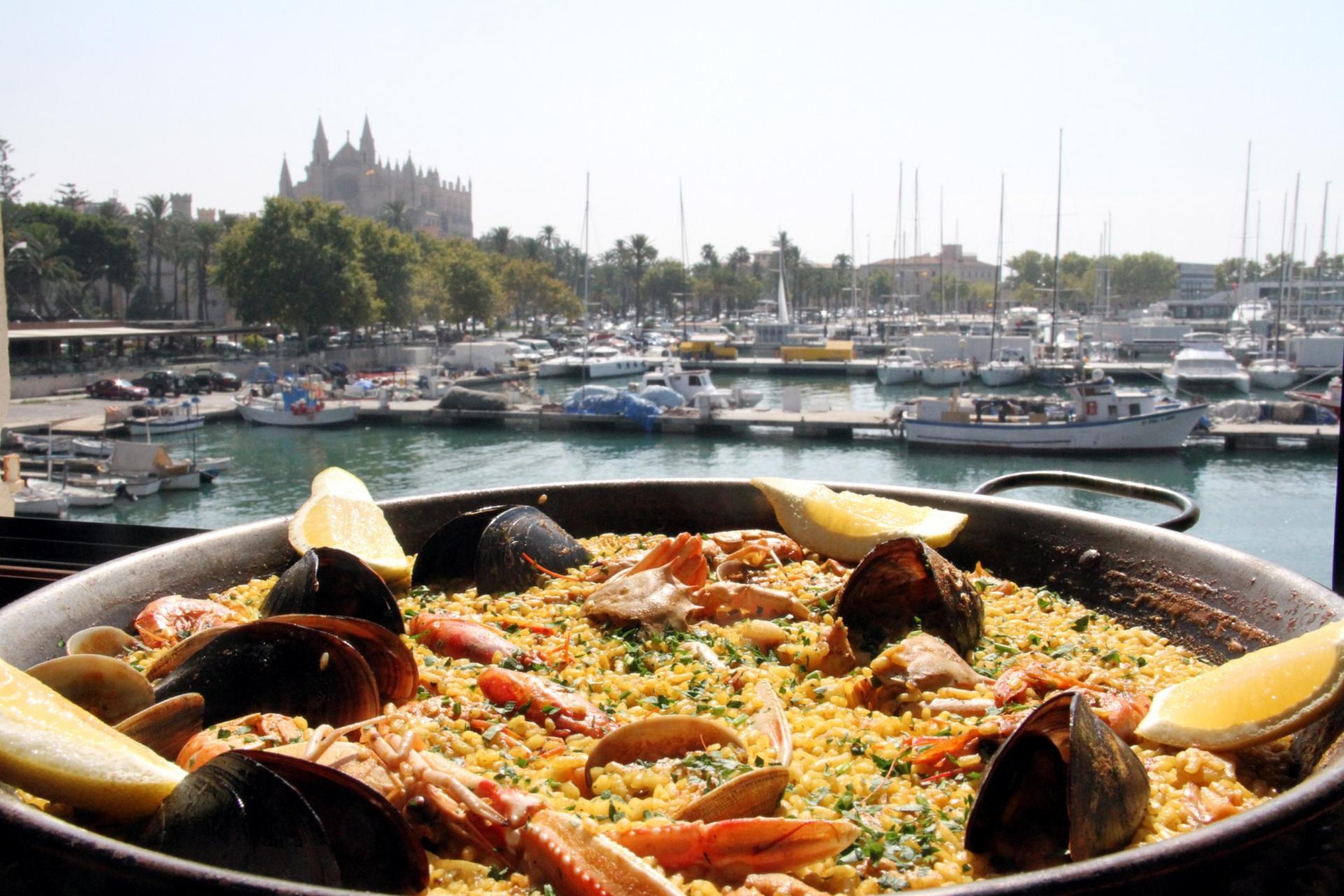 If a family had a big enough collection of snails sleeping it off for the summer, they could start washing a few to wake them up so they could be added to the weekend paella.
Sr Vidal and his researchers got one thing right. You should have noticed their 10 essential ingredients do not include onions.

That’s because the vast majority of Valencians agree that onions do not go into a Valencian paella. Valencians say onions make the rice go soft.

The last time I noticed paella was in the news was in October of 2016 when Jamie Oliver caused a bit of a hullaballoo by including chorizo in his version of paella that was shown on Spanish national television.

His use of this traditional spicy sausage was considered to be so unorthodox that it was even reported on national television’s 9pm news slot. 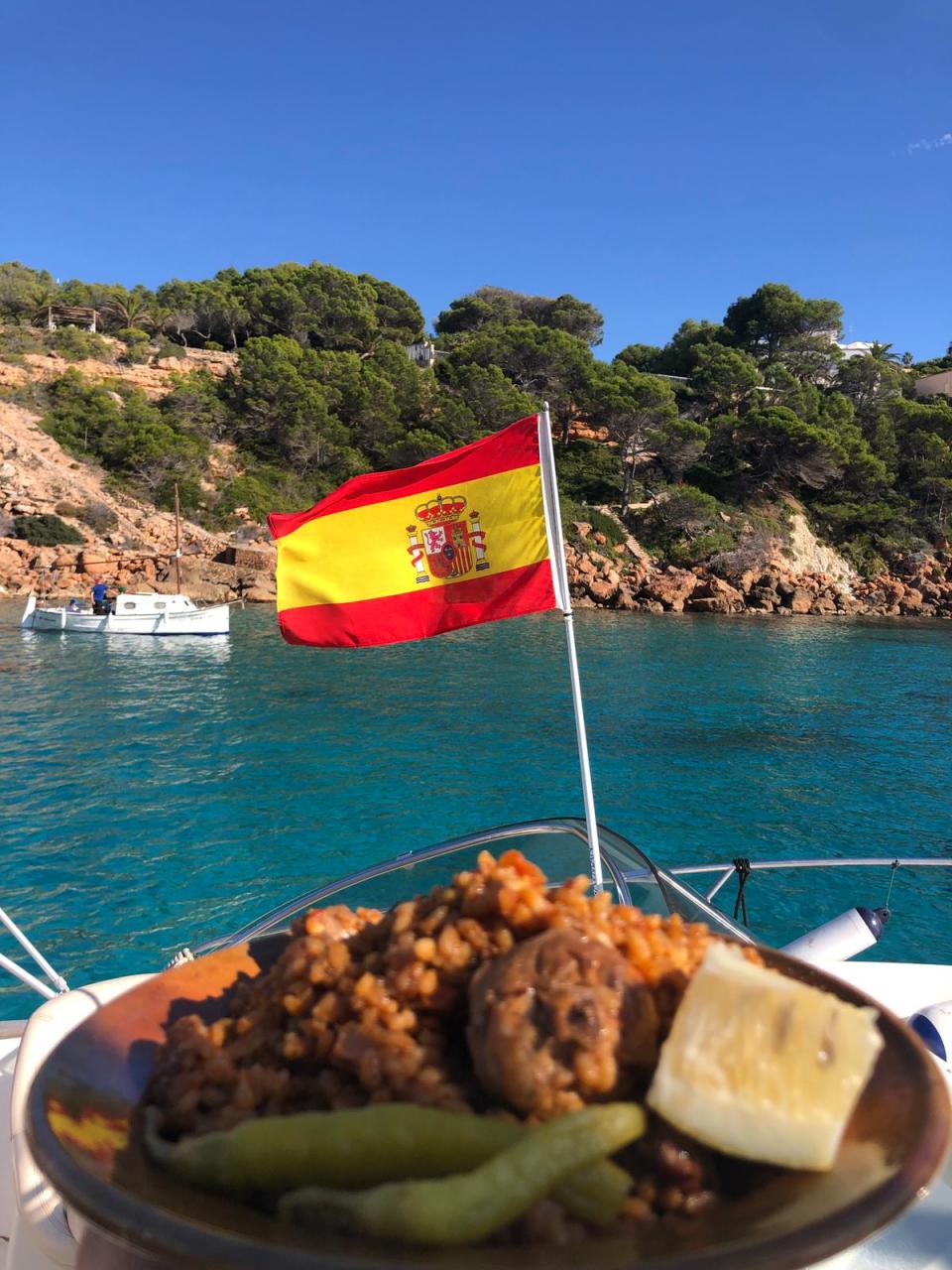 In the following days newspaper columnists all over Spain crucified Jamie for what they considered a heresy: no one puts chorizo into a paella, they all said. Well, not quite all of them.

One of Spain’s best food writers rushed to Jamie’s defence (the only one who did so from my reading of the main Spanish newspapers at the time) with a superb column in which he showed that many of the country’s most distinguished cookbook authors, going back to 1894, had given chorizo as one of paella’s varied ingredients.

He was Cristino Álvarez (he died in January of 2018) who wrote under the name of Caius Apicius for the Spanish news agency Efe, so his column appeared in newspapers all over the country.

He started off by saying Jamie’s paella recipe with chorizo was first given six years previously (2010) in a TV programme and a book. It was on a food channel, not national TV, and no one paid any attention to it. But after exposure on national TV everyone got their hatchets out. 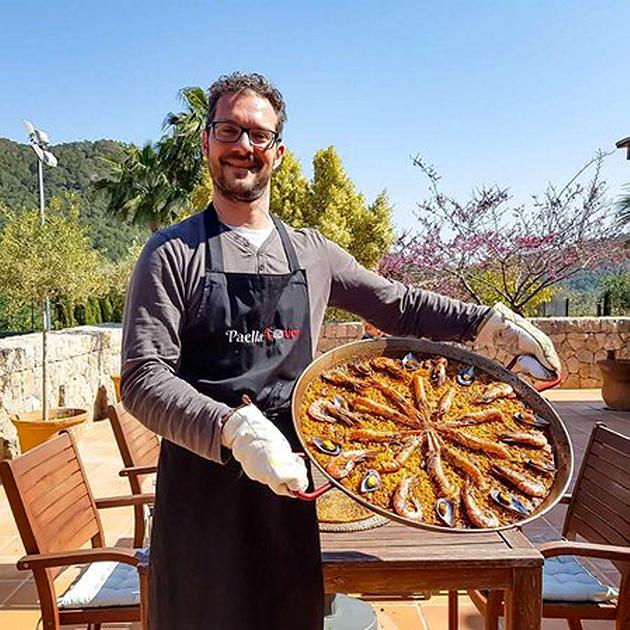 Cristino pointed out that Jamie never said he was doing a traditional Valencian paella, but simply a paella he liked. In the 2010 book, published in Spain as Las Escapadas de Jamie, he wrote that although some people say you shouldn’t add chorizo to a paella, he liked it and included it in his recipe.

Cristino said in his column he hated intolerance and thought we should all be free to put whatever we like into paellas we make in our own homes.

I have never had a restaurant paella that contained chorizo, but two Mallorcan friends always add it to theirs. And both say the chorizo makes their paellas the tastiest they have ever eaten.

The fact is there is no authentic paella recipe — not even in Valencia. In restaurants and homes all over the country, the Valencian paella is the most abused dish in Spanish regional cooking.

What is served in restaurants is a hotchpotch of weird and wonderful concoctions that may be paellas but are certainly not Valencian.

The paella had it origins in the countryside around Valencia’s rice paddies. That we know for sure. The problem is that there is no written record of what went into those first paellas.

Some experts insist that a real Valencian paella should contain nothing but rice, eels (which were plentiful in the rice paddies), snails and flat green beans. Most food writers, historians and cooks in Valencia are not quite as austere as that. 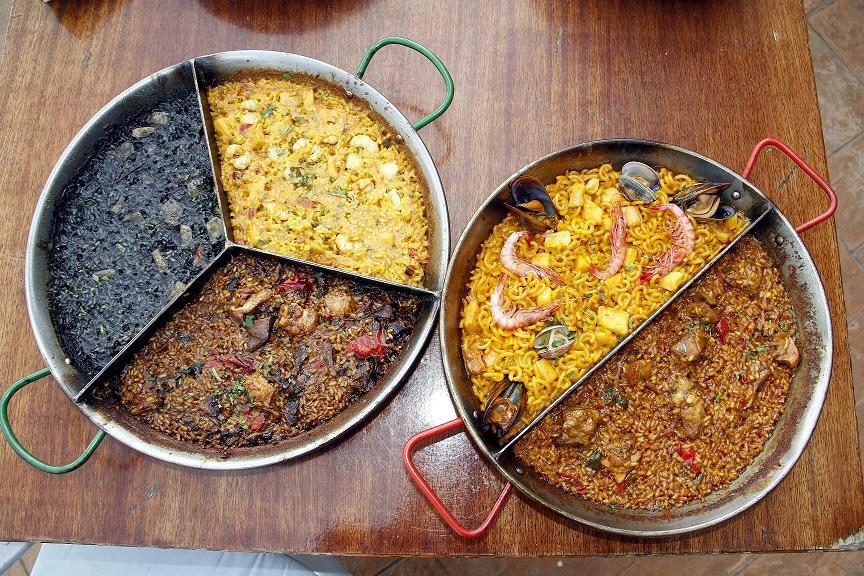 It is nowadays generally accepted that a Valencian paella can be made with chicken, rabbit, snails, eels when in season, flat green beans and fresh white beans, especially the garrofó.
It will also have a sofrito made from tomatoes, pimentón (sweet paprika), salt and genuine saffron — never yellow colouring powder. And no onions, as I’ve already mentioned.

When did you last eat a restaurant paella valenciana with anything like those ingredients? I doubt if there’s a restaurant on the island serving even a near approximation.

One of the wonderful things about cooking, however, is that some dishes need not be made within extremely strict limitations. Paella is one of them. 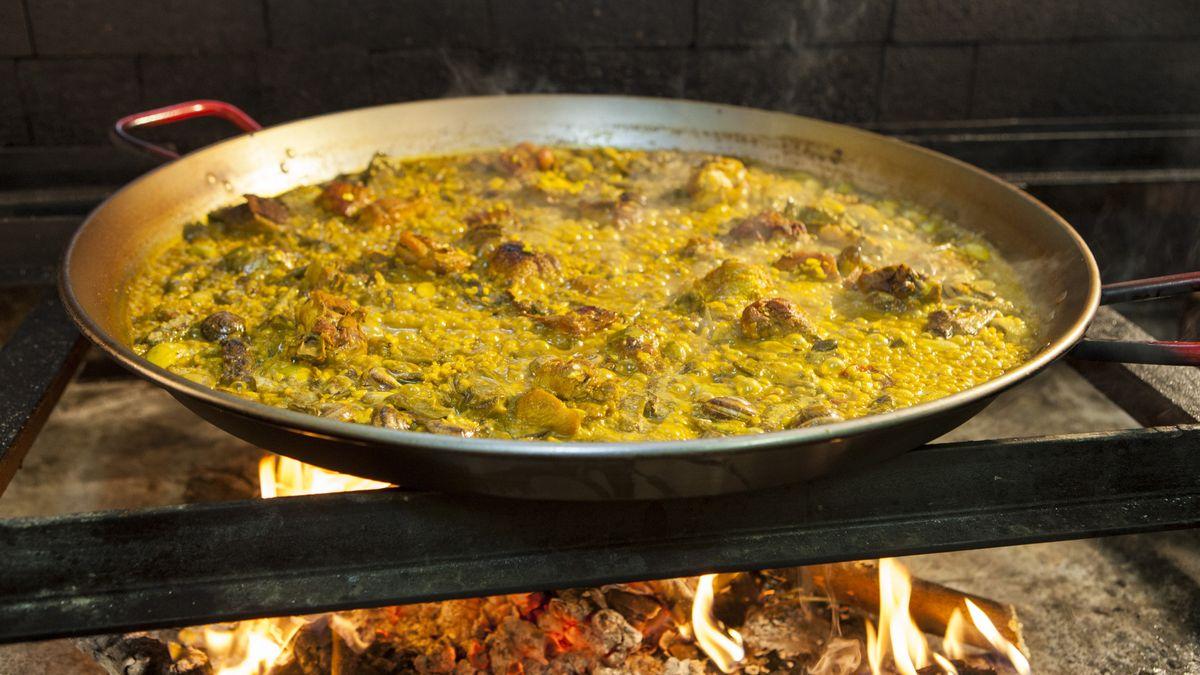 Hundreds of paella variations exist, but what we mustn’t do is call them Valencian unless they are within the bounds of the ingredients mentioned. The tremendous variety of paellas that exists nowadays can be divided into four main groups.

These contain chicken, rabbit, pork (including chopped spareribs), snails and duck, especially in the rice paddies and marshlands of Valencia.

These call for shellfish as well as fish and they are especially popular in Alicante. The people of Alicante are also fond of paellas made with octopus. Favourite ingredients also include monkfish (rape), langostinos, gambas and cigalas. Mussels are also used, particularly for decorating the surface of the paella.

These can include all kinds of vegetables and fresh or dried beans. Aubergines in slices, cubes or long purple strips are especially suitable.

This is the paella you are most likely to come across in restaurants — and more often than not under the name of paella valenciana.

They sometimes contain scrappy bits of chicken and pork, a few mussels, a little squid and one large gamba or langostino per person.

Average run-of-the-mill restaurants are not good places to have a paella. They don’t take enough care over them and they frequently cut corners on ingredients, such as using chicken wings and drumstick tips.

More often than not the ingredients, with the exception of the rice, are overcooked.
It’s another story, however, when you do a mixed paella at home and use meaty chunks of chicken or rabbit (some people use both) good pieces of pork, with fish and shellfish that’s succulent and terse instead of being soggy and overcooked.

An advantage of making paella at home is that it’s kitchen friendly, a good fun dish for the cook. There’s a fair amount of work involved but most of the slicing, dicing and chopping can be done beforehand and even in nice easy stages.

It’s never a good idea to rush a paella, so you start the preparation early and continue at a nice easy pace, taking everything one step at a time.

But if time is short, as it so often is, three or four people can do the preparation if there is enough working space. And, as the saying goes, many hands make light work.

That other saying about too many cooks spoiling the broth, however, also applies to paella. So when it comes to the final cooking stage, only one cook should be in charge.

And if he (or she) has used an ingredient you find a bit unorthodox, don’t get the hatchet as the Spanish columnists did with Jamie Oliver.

Remember Cristino Álvarez’s lesson in tolerance, and accept the unexpected and try to enjoy it.

A paella is one of those dishes that brings out the absurd in some people, especially those who are cooking it.

People who are usually flexible, tolerant and liberal-minded, suddenly become pedants when the making of a paella is under discussion.

As we have seen, paella polemics started with the ingredients, but when pedants get going they soon find all kinds of other hairs to split.

Next week we’ll have a look at some of the other controversies that can rage when a paella is being cooked. It’s one way of learning how to do a good paella.