In September 2020, the Rotary Club of Calvia once again started its planning for the 5th season of the Inter Schools Debates Competition. With one major difference: Majorca, Spain and the whole world were in the grip of the worst pandemic in a century. Obviously this was going to be a real challenge. What would normally be a programme of several debates taking place between teams of schoolchildren visiting each other’s schools was going to look a bit different this time around. And indeed the question was if any of the regular participating schools would even be able to bring a team together to compete. Kate Mentink, leading a team of Rotarians and volunteers set out to bring about something of a minor miracle in the face of some difficult circumstances. Here’s her account, in her own words:

“The first step of course was to contact all seven schools who had participated last year, plus one or two who were considering joining this year. All of the schools already had a tremendous task to organise and implement the very detailed and difficult health protocols dictated to them to protect both students and staff from the COVID-19 virus. At one point, we really thought that we would be joining the long list of social, cultural and sports events all cancelled or postponed to some time this year.

“So we were delighted when six schools took up the challenge. The Academy International School, Agora Portals International College, Baleares International School, Bellver College, Lycee Francais de Palma and Queens College. Our in-house Rotary “technical team”, Frank and Harry, got to work, and identified special speaker-cameras which we could purchase online. We were grateful indeed for the sponsorship of the health insurance company ASISA which enabled us to purchase this vital piece of equipment, without which the debates would not have gone as smoothly as they did. We held two rehearsal sessions at the Real Club Golf Bendinat which were rather amusing, and served their purpose, so many thanks indeed to Belen for offering the facilities for these meetings.

“In the meantime our team of twenty volunteers also got to terms with having to organize all nine debates on Zoom. To our own surprise things went really well, with only the occasional hiccup when wifi connections were less than stable. The prize trophies were ordered at Mian of Pont d’Inca and sponsored by Palma Pictures as previously. Our grateful thanks as always go to the MD Paul Abrey. The President of Age Concern, Jackie Codd once again offered to sponsor the trophy for Best Debater of the whole Competition. And so we were set!

“Meetings were held with the central team of Frank Garrelts, Viv Lorentzon, Harry de Lange, Julie Brogan and myself. Then on to final arrangements with schools, volunteers, judges. At this point we were still able to meet then albeit with masks and social distancing. Long time supporter John Ballard was invited to perform the official draw for which school, on which date, and with which Motion of Debate. 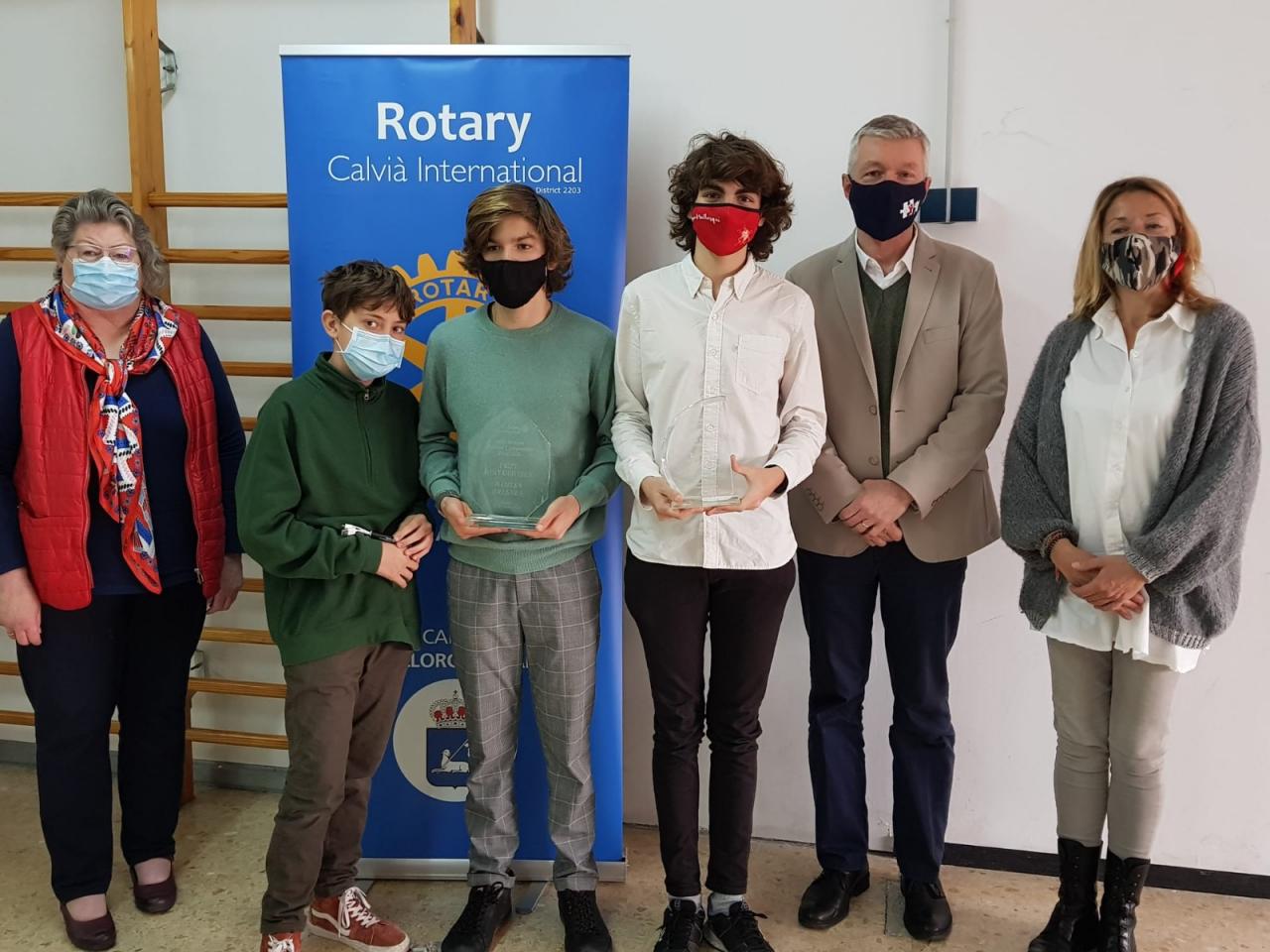 “The debating skills of these young teams, aged 14-16 years of age, was impressively high this season. Deciding the winners continued to prove to be a real challenge to the three members of each jury, almost all of whom had been judges in previous competitions. The teams showed real in-depth knowledge of the subject of debate, presence in front of the camera, passion in their defense for or against the motion, and a maturity beyond their years in the “Art of the Debate”. I would like to mention that all of the judges, volunteers, and the whole of the Rotary team extend their congratulations to every team member from each school on exemplary efforts under extraordinary circumstances.

“The final debate was held on 27th January with Agora and Bellver debating the motion “Artificial Intelligence is dangerous”. The Debate did not disappoint all those watching online. It was top class, and the jury had the most difficult of decisions. After great consideration the winners were announced:

THE BEST DEBATER of the Competition: Damien Bresnan of the French Lycee
THE WINNING TEAM of the Competition : Agora Portals, International College. Huge congratulations to all team members, teacher Eva Fitz, and Principal Rafael Barea.

“Sadly there was no get-together for a celebration with all the schools this year, but we are all already looking forward to next season starting October 2021 where we hope we will be able to hold the Debates in person. Myself, and all of the members of the Rotary Club of Calvia International wish to thank everyone who made such a special effort to make the competition possible this year.”

To see more about the work that the Rotary does visit www.rotarycalvia.com