Marc Fosh is the first and only British chef to be awarded a Michelin Star in Spain.

Here in Majorca, the annual almond harvest has recently taken place and it’s time to put them to good use. Spain is actually the world’s second largest producer of almonds and they grow all over the Spanish Mediterranean regions of Catalonia, Valencia, Murcia, Andalusia, Aragón and all over the Balearic Islands. Traditionally, during the harvest in September, the branches of helpless almond trees were beaten by hand with long sticks to release the fruit, which would drop into waiting nets below, but this method is fast disappearing. It’s hardly surprising, I tried it myself several years ago and it is unbearably hard, back-breaking work that almost put me off almonds for life. Today, you’re more likely to hear the dreadful drone of mechanical tree-shakers as they violently grip and shake the trees into submission.

Almonds have been cultivated since ancient times and are often mentioned in The Bible, although their exact origins are obscure. Unlike oranges, which have to be watered regularly, the almond tree is extremely undemanding. It gets the moisture it requires through its roots, which extend deep into the ground. Spanish almonds are generally of outstanding quality because most of the cultivation takes place on small, dry-farmed orchards. Although these are less productive than extensive, irrigated orchards, the almonds have a higher oil content which makes them moist and more flavoursome.
Almonds belong to the same family as cherries, apricots and peaches. The delicately flavoured nuts are used throughout the world in both sweet and savoury dishes and they are often paired with chocolate, apples, pears, strawberries, apricots and fresh figs. The Spanish have invented hundreds of recipes for almonds and they appear in all manner of sweet pastries and biscuits, including the famous turrones (nougat). They are often used to thicken soups and sauces and form the base of ajo blanco malagueño, a refreshing chilled almond and garlic soup from Andalusia and here in the Balearics we have gato de almendras, a light and airy, almond sponge cake.

There is nothing quite as satisfying as serving up a generous wedge of home-baked cake, and let’s be honest, nothing beats the taste of something that’s been baked at home, whether it’s a simple sponge, a banana cake or even warm fresh bread. Baking at home seems to be more and more popular these day’s and its easy to see why, it is relaxing, rewarding and great fun. 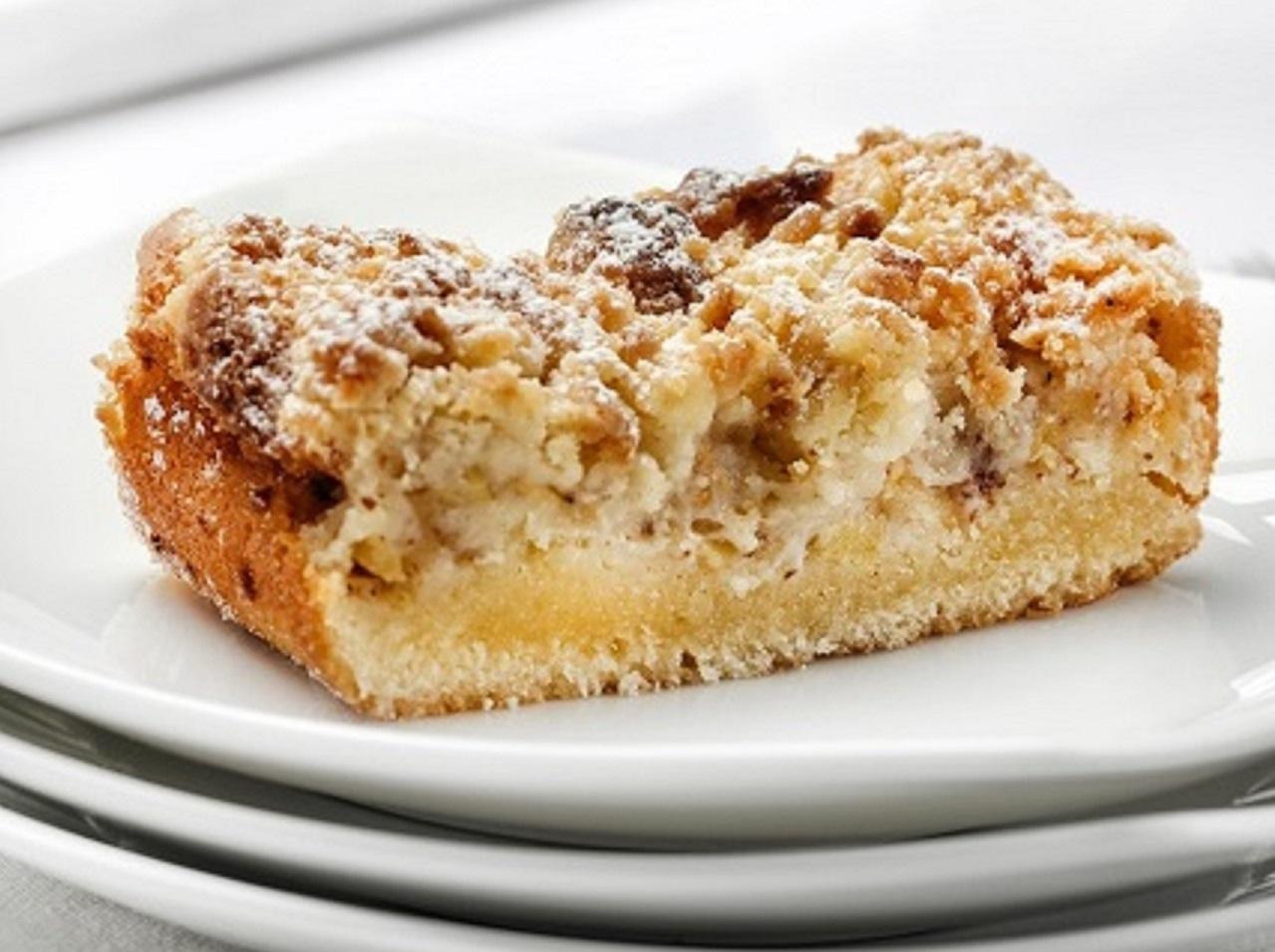 To make the crumble, mix the flour, baking powder, ground almonds, butter and sugar in a bowl until it resembles breadcrumbs. Set aside.

Place the apples, butter and cinnamon in a saucepan over low heat and cook gently for 5 minutes or until softened. Allow to cool. Place the butter and sugar in an electric mixer and beat until creamy. Add the egg and beat well. Fold in the flour, baking powder and milk.
Spread in a 20cm x 30cm tin lined with baking paper, top with the apple filling and crumble and bake for 40 minutes until golden. Cool and slice into squares. 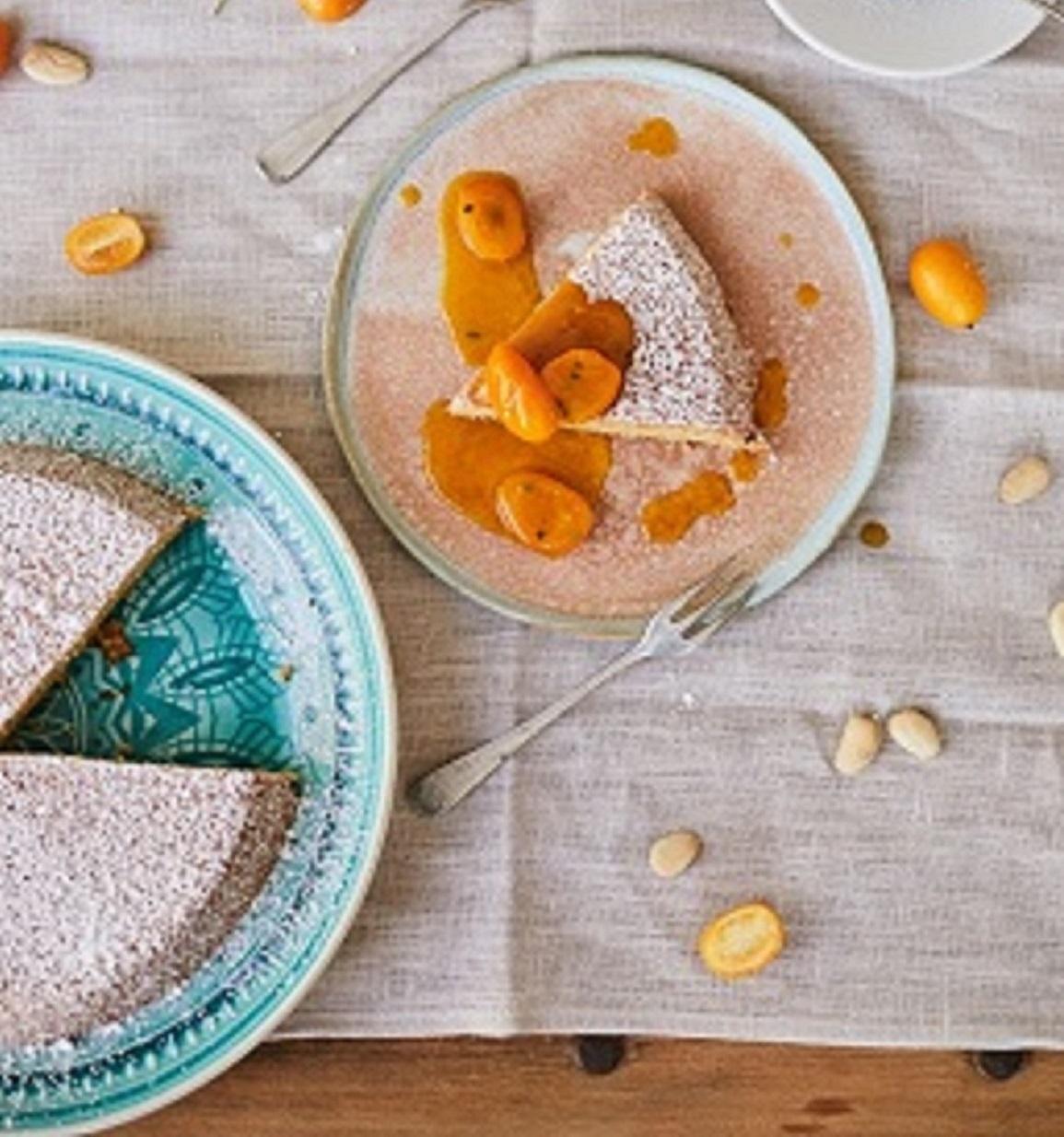 In a large bowl, whisk together the egg yolks and caster (superfine) sugar with an electric hand whisk (beater) until the mixture is light and fluffy. Add the lemon zest, cinnamon and almonds and gently fold in until just combined. Set aside.

In a separate bowl and using a clean whisk, whisk the egg whites to stiff peaks, then add to the egg yolk mixture and carefully fold in until just combined. Pour the mixture into the prepared cake pan, then bake in the oven for 45–50 minutes, until golden and well risen. Turn off the oven and leave the door ajar while the cake cools to room temperature.
While the cake is cooling, make the kumquat and orange blossom syrup. Combine all the ingredients in a medium saucepan over a medium heat and bring to the boil, then reduce the heat to low and simmer for 4–5 minutes, stirring occasionally, until the mixture starts to thicken. Remove from the heat and set aside until the cake is ready to serve.

Carefully remove the cooled cake from the pan and dust with icing (confectioners’) sugar. Slice into portions and place each portion on a serving plate. Spoon over the syrup and serve. For an extra decadent touch, serve with a scoop of vanilla ice cream on the side.