For as long as most locals can remember, the third weekend of November, here in Mancor de la Vall, has always been reserved as a window for celebrating the famous ‘S’Esclata Sang’ mushroom, showcased along with a variety of other wild and cultivated fungi across a two day event simply known as ‘The Mushroom Fair’.

Due to a political re-shuffle and some kind of disagreement as to who should organise the mushroom fair, the weekend window of 22/23/24 November is no longer spotlighted as the ‘Fira de L’Esclata Sang’ (complicated thing copyright), and the event is now incorporated into the new ‘Sa Fira de Mancor’, a small local fair celebrating culture, tradition and gastronomy including a big nod towards music with yet another ‘Rock Night’ thrown in for good measure - all promoted and organised by ‘Arrels’ here in the township of Mancor de la Vall.

Under the new administration, the humble yet evocative mushroom seems to have taken second place to a more party feel with music surfacing as the predominant vibe. However, there is still a place for the famous fungi that die hard locals, bent on real tradition, haven’t thankfully dismissed.

I knew something was definitely afoot when clandestine individuals were spotted sneaking out of the village at the crack of dawn, heading for the mountains, all a-swing with a wicker basket or two. The Majorcans are known as traditional foragers, and often seen out on mountain/forest walks enthusiastically gathering wild asparagus, garlic, fenoi, herbs and snails (Majorcan truffles). But recently, I noticed a more determined swing to the forage basket. There was definitely more gait to the stride, with an expression of sheer determination stapled to those knowing faces. Then the peseta finally dropped – it’s ‘seta’ season, and that means ‘S’Esclata Sangs!’ 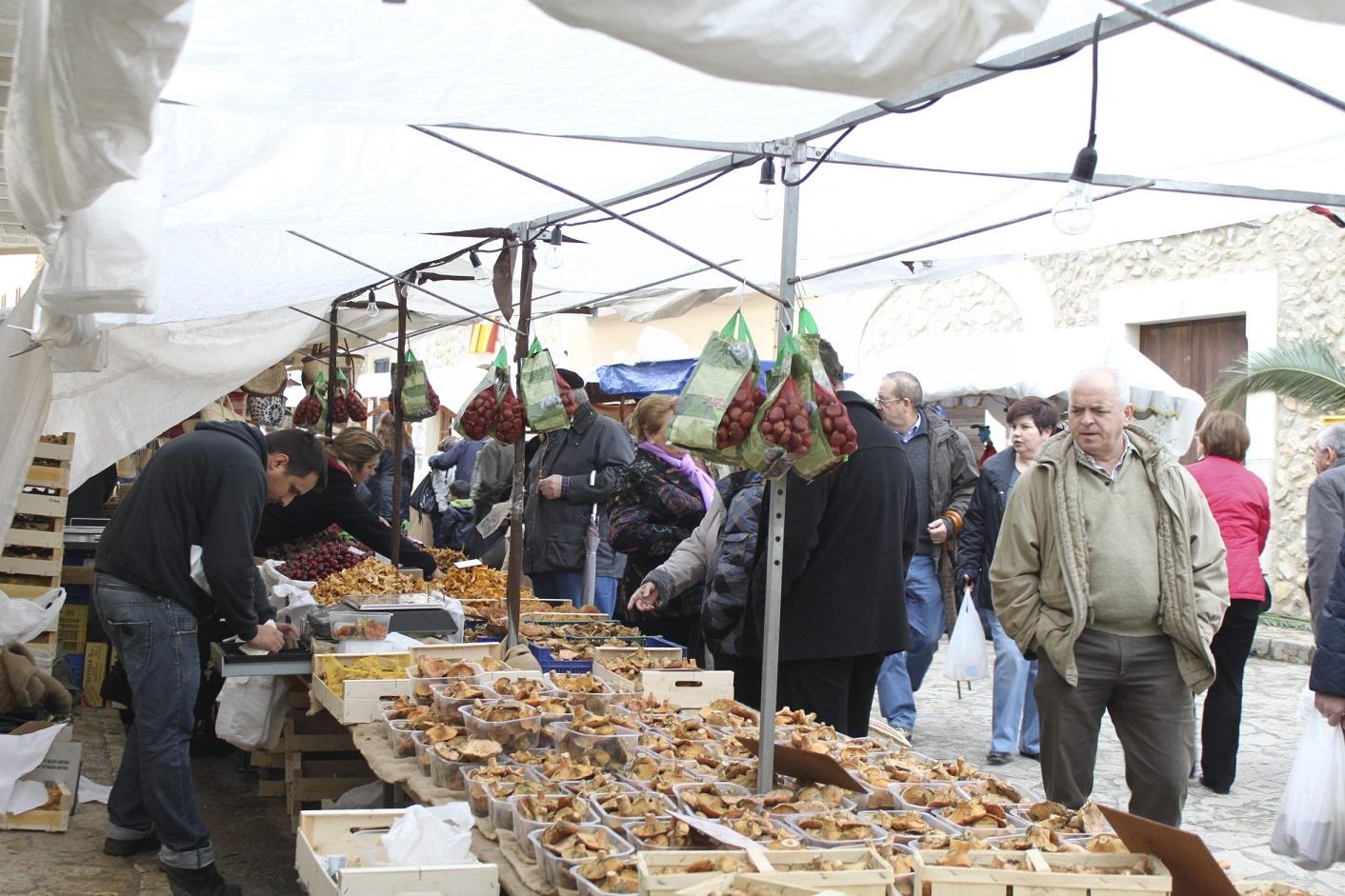 But beware! You can’t just go wandering off into the forest hoping to find a pixie sitting on something huge and yummy. It could be a toadstool! And one of the quickest ways to the casualty dept. You have to know where to go, and where to look. Each local fungi ‘aficionado’ has his or her own special spot, and would willingly die a thousand deaths (hopefully not by mushroom) rather than spill the beans . . . or the ‘bolets’ as to the whereabouts of those secret sites.

However, if trudging through the morning mist searching for ‘setas’ isn’t your thing, then sit back and let the mushrooms still come to you at one of the smallest yet most awaited autumn fairs.

S’Esclata Sang fittingly translates as ‘burst of blood’, from the distinct ‘ooze’ of red liquid the fungi presents when cut or broken. And being in short supply, as well as being the most difficult wild mushroom to find, this particular mushroom stars as the headline act of the show. Esclata Sangs (Lactarius Sanguifluus) are a particular type of mushroom with a romantic legend attached to their extremely expensive stalks.

Hearsay holds fantasy about these particular mushrooms growing on Calvary in the shadow of a particular crucifixion cross. Apparently, the blood of Christ spilled onto these said mushrooms, which bear the stigmata to this day. It’s a wonderful story, but best not to start puzzling as to how mushrooms from Jerusalem ended up on the Balearic island of Majorca! Just be satisfied to know they will hopefully turn up in basket-loads at ‘Biniarrels Sa Fira de Mancor’ over the coming weekend.

The event actually kicked off last Friday on 15 November when local bands took part in a competition to decide who would headline at the Rock Night, whilst also conveniently picking up a winning purse of €500.

Across the three chosen days of the fair there will be children’s events, a ‘Procession of the Beasts’, a performance by Mancor’s amazing Batucada drummers, and a ‘fire night’ with the infamous ‘dimonis’ and their spectacular fire run. For anyone who has never witnessed a baptism by fire it’s an unbelievable experience and something quite deliciously terrifying. We usually stand well back to avoid involuntary combustion, yet wouldn’t miss it for the world. It makes an English bonfire-night sparkler seem a tad tame by comparison. And be advised to wear clothes that won’t be ruined by the odd wild spark or ‘drifting’ red hot particles!

And if that’s not enough, the obligatory Rock Night on Friday 22nd will haunt you into the early hours of the following day. For me, that’s when two plump S’Escalta Sangs get shoved firmly into the ears! I don’t really understand why a noisy rock concert is always incorporated into local events championing art, culture and tradition, but there you go!
Saturday, the volume notches down with a gentle ‘Parade of the Giants’, plus painting and handicraft exhibitions, all shadowed by the traditional roaming of ‘xeremias’ and traditional folk troupes.

There is a special treat in store on Saturday evening, when local singer Marga Rotger presents a culturally appreciated musical concert, performing tasteful, original music from her latest cd - ‘Infinit Emocionari’- taking place in the municipal theatre of Mancor de la Vall at 23.00.

Sunday is when the mushrooms really hit town. The fair is all about showing and preserving traditional mountain activities, island traditions and Majorcan customs. From past experience there are usually stalls flowing through the streets selling an incredible variety of every wild mushroom available, including the ferias’ former namesake – ‘s’esclata-sangs’.

But until then . . . here is a tasty little lunch or supper dish for two, using all those wild mushrooms you will hopefully forage at the fair!

Method: Heat oil and butter in a large frying pan or wok. Add onion and soften for 5 mins. Add mushroom selection with crushed garlic and tarragon, gently sauté for 5-8 mins, stirring frequently until just starting to brown in places. Season with salt and lots of black pepper to taste. Meanwhile toast ciabatta bread under grill, spread with lots of butter and place on two serving plates. Top with rocket leaves lightly tossed in French dressing. Crumble the Roquefort cheese into the mushrooms and gently stir for a further minute until the cheese just begins to melt. Pile onto ciabatta toast. You can also crispy fry some chopped bacon and sprinkle over the top. Serve immediately.