As the season comes to a slow down at the end of October we slide into November. Many businesses close for a couple of weeks and holidays are taken. Sollerics are great travellers if they have the money and the time. The type of trips they take in November gives a good indication of the kind of year they have had. This year we have local business owners spending November in Japan, the Himalayas, Morocco, New York, Canada and the Antarctic. This is not to mention the extended European trips to Vienna, Madrid, Seville and good old London. I think you can safely assume that the businesses they represent have all done well this year.

As this week ends we slip into the holiday weekend around the two early December Bank Holidays. Bags are already being packed for many visiting family and friends in other parts of the mainland and European destinations. The December 6 is a holiday to celebrate the Spanish Constitution. This marks the anniversary of a referendum held in Spain on December 6, 1978 to approve a new constitution for Spain. Then on December 8 the second holiday of the week celebrates the Holy Day of the Immaculate Conception. An important date in the Catholic Church.

As there are two national bank holidays on the December 6 & 8 , people often take the day off in-between. Giving a long weekend or a few days of a “Puente” or Bridge holiday. This year, in 2019, the 6th is a Friday and the 8th is Sunday. Many will take Monday 9 as a day off in lieu to give a long weekend.

As many friends leave for their trips others flock to Soller to visit family and friends here. With this in mind a whole list of early Christmas events is planned in the centre. Shops, events, music and workshops for the children are amongst the list. In anticipation of welcoming many here the Train company has given a three-day present to visitors who arrive by train and tram. A special price ticket of 13 euros gives you a return train from Palma and a return trip of the Soller Tram. This applies to all journeys on 6th, 7th & 8th December 2019.

During this time the Christmas lights will be switched on and Soller becomes its Christmas self. Behind the scenes work goes on to make sure that needs are met for those who do not have holidays after a successful season. The Soller Valley supports a number of families with no income throughout the year. At Christmas many donate toys, clothes, food and toiletries to the Red Cross and Caritas collections. The Food Bank world of Soller will still continue alongside the evidence of plenty. 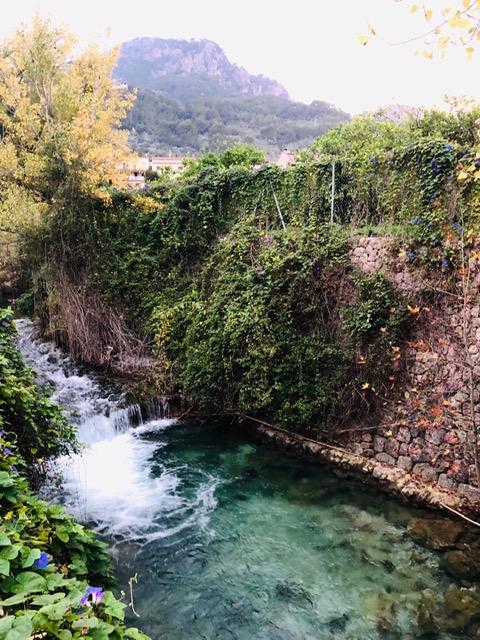 Soller is the Capital of culture as a UNESCO designation and in December it lives true to its title. The Christmas and New Year programme include concerts from our local talent. Pro Musica Chorus give us their Christmas offering on December 14 at the Convent Church. A mixed variety of Soller musicians perform on Friday, December 13 in St Bartholomews Church. The mezzo soprano Waltrud Mucher gives us a light hearted view of the season in the Escolapies Centre on December 6. Many more musical and poetry events are listed on the Soller December programme. The best way to experience the celebration world of Soller is just to float from one event to the other. Planning and organization is not high on the list for many but happening by an event is.

The Christmas events of Bunyola, Palmanyola and Esporles are also on the radar now. This is one of the benefits of no Soller Tunnel. An ad hoc decision can easily be made to see what is going on in neighbouring villages. The crossover is beginning to be understood now that the 10 euro return barrier has lifted. Soller benefits hugely from the local shoppers and participants in our world coming from our neighbours across the mountain.

The local politicians in Soller are doing their best to create a Christmas to remember here. They know they will be judged on everything for the Christmas programme to the positioning of the tree. This year the tree has reverted back to its position above the fountain. For the last few years (under a different administration) it stood outside the Town Hall.

The subtleties of change do not go unnoticed in this place. Small town magic – don’t you just love it…