Over the Christmas period, it’s a great idea to have some simple, stress free dishes to turn to when you really don’t feel like spending all morning slaving in the kitchen cooking for family and friends. It’s also a nice idea to have some meat free, healthy options that don’t leave you feeling bloated and ready to burst as you flit from one long feast to the next. With its beautiful pink-orange flesh, meaty, succulent flavour and numerous health benefits, fresh salmon is the perfect choice.

It’s extremely versatile and holds up to almost any cooking method weather it’s served raw as delicate sashimi, smoked with a variety of aromas, cured and marinated with salt, gently poached, roasted or fried, this oil-rich fish can be the perfect, delicious Christmas party centrepiece.

In my view there is no substitute to seasonal wild salmon in terms flavour and texture. The very appearance of a wild salmon is a joy to behold. It’s had a life that’s been full of adventure. Swimming up and down stream, out to sea and back again, leaping waterfalls and gorging on small prawns and other crustaceans developing that beautiful, pinkish colour and wonderful flavour. Unfortunately, wild salmon is very difficult to find these days but farmed salmon is extremely abundant and a relatively cheap alternative. Although it is not big on flavour, it is very easy to cook. Its fatty make-up allows you to overcook it slightly without spoiling the texture of the fish.

My roasted salmon recipe is so simple but elegant enough to impress at any dinner party. I often make it on days when I have less than an hour to cook.

You’ll need salmon fillets that are skinned and with the pinbones removed. You can ask your friendly fishmonger to do this but removing them really is an easy maneuver. Just lay your salmon fillet flat on a board, skin side down (even if there is no skin). Run your hand across the surface of the fish from head to tail and you will feel a ridge of the tiny bones sticking up. Starting at the thickest end of the fillet, use small pliers or tweezers to grab the tip of the bone and firmly pull it out. There may be as many as 15-20 of these bones in a whole fillet. The almond and dill crust can be made in advance and I love to serve this recipe with anchovy flavoured, creamed brussel sprouts and boiled new potatoes at this time of the year. It’s fast, healthy and delicious…what more do you need…well maybe something sweet?

I love the sweet aromas of the kitchen during Christmas time. It’s heavy with the scent of cloves, cinnamon, ginger, sweet wine, orange peel and chocolate. Its so good it should be bottled and sold! For me, Christmas festivities would seem almost incomplete without the traditional offerings of sweet, cinnamon star or gingerbread cookies. They’re simple and delicious to make, but not every gingerbread cookie is created equal. Firstly, the texture of the cookie needs to be fairly crispy along the outside with a semi-soft, cake-like inside, and like all “perfect” cut-out cookies, they definitely need to keep their shape when baked. Secondly, they must taste sweet but notably spicy, and have a rich molasses flavour. Essentially they should taste like Christmas. Wether you’re spending time in the kitchen or lucky enough to have somebody cooking for you; may the Christmas season fill your home with joy, your heart with love and your life with laughter. Bon Nadal! 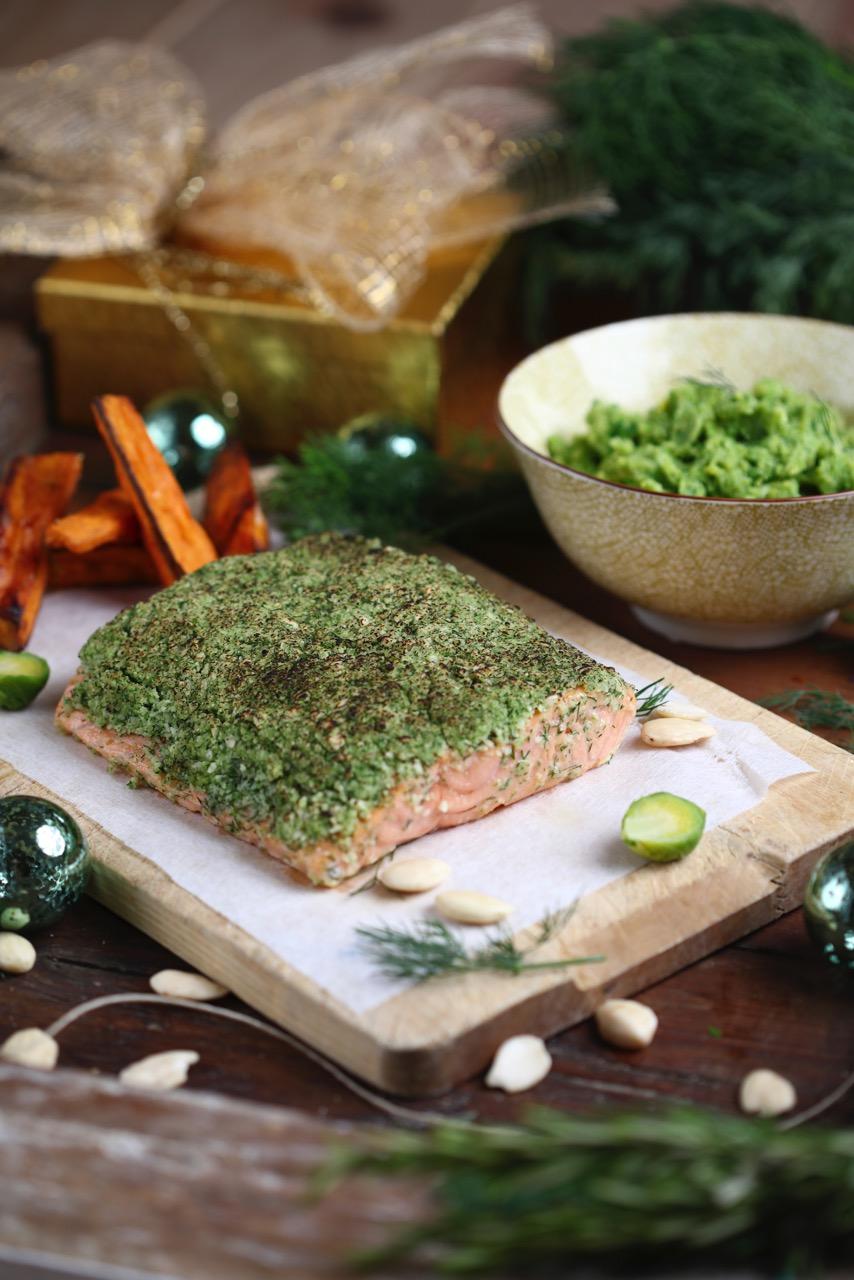 Place all of the ingredients for the crust in a food processor and pulse several times until it forms a nice green crust. Preheat oven to 180°C. Place the salmon on a baking tray lined with non-stick baking paper. Top with the almond mixture, pressing to help the mixture stick to the fish. Bake for 12-15 minutes or until golden and cooked through.

Bring a large saucepan of salted water to a boil, and cook the sprouts for 12 minutes until just tender. Drain, and then place in a food processor along with the butter, anchovies and cream. Pulse until you have a rough, creamy purée.
Season with freshly ground black pepper. 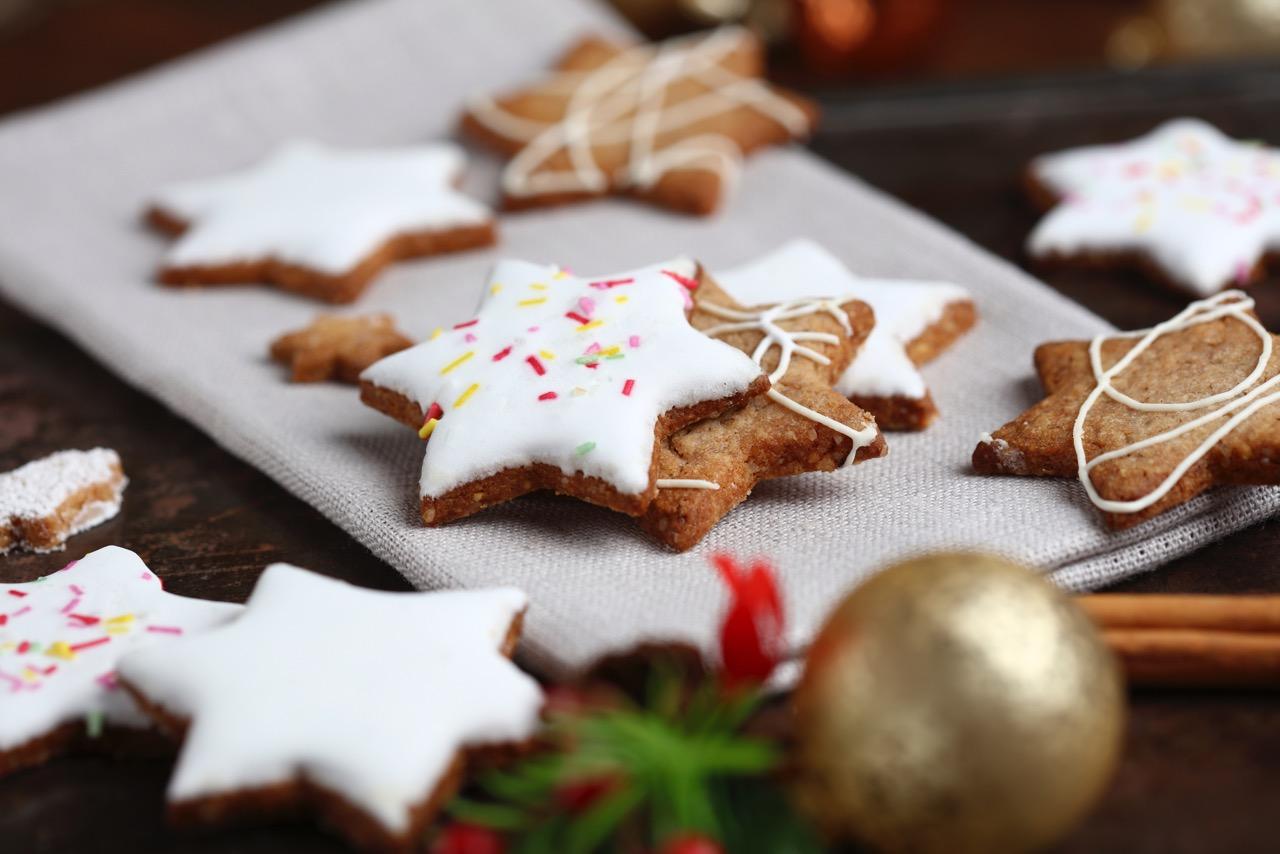 Preheat oven to 180°C (355°F). Place the butter and sugar in a food processor and beat until pale and creamy. Add the vanilla, ground cinnamon and egg yolk and beat well to combine. Add the flour and beat until a smooth dough forms. Divide the dough into 2 portions and wrap each portion in plastic wrap. Place in the refrigerator for 15 minutes or until the dough is firm. Roll out each portion of dough between 2 sheets of non-stick baking paper until 3mm thick. Remove the baking paper and use a 7cm star-shaped cookie cutter to cut out cookies from each sheet. Place the cookies on baking trays lined with baking paper and bake for 8-9 minutes or until the cookies are light golden. Cool on wire racks.
For the icing, sift the icing sugar into a large mixing bowl and stir in enough water to create a smooth mixture. Carefully spread the icing onto the biscuits using a knife and set aside until the icing hardens.

Preheat oven to 190ºC. Place the butter and sugar in the bowl of an electric mixer and beat for 10–12 minutes or until pale and creamy. Add the golden syrup, flour, ginger and bicarbonate of soda and beat until a smooth dough forms. Cover with cling film and refrigerate for 30 minutes. Roll the dough out between 2 sheets of non-stick baking paper to 5mm-thick. Use heart and star shaped cookie cutters to cut out cookies and place on baking trays lined with non-stick baking paper. Bake for 8–10 minutes or until golden. Allow to cool on the trays.Place the icing sugar and water in a bowl and stir to combine. Pipe out the icing to decorate and outline the edges. Allow to set for 10-15 minutes.