Next week is going to be the weirdest Easter most of us have ever experienced — including those who have childhood memories of the Second World War with its dire tribulations and the aftermath that included rationing and a paucity of everyday essentials.

Spain’s Easter festivities are very much to my liking and I prefer them to Christmas: no pressure is exerted for us to spend scads of money and to have a good time. For those with normal jobs, it’s a five-day holiday and a time for family reunions at a table replete with Easter fare.

A Majorcan friend has three major get-togethers every year that are attended by 37 members of his family, which consists of seven brothers and sisters, plus their children and in-laws, parents and grandparents. Easter for them is a true gathering of the clans.

But with the coronavirus lockdown it will be a tranquil time for them next week and also for the rest of us. I don’t know about the inland scene, but Palma is an urban desert. I go to the office twice a week and on the 15-minute walk I never see more than dozen people.

Most of the buses trundle past completely empty and a few of the bendies may have four passengers, sitting as far away from each other as possible.

Easter Sunday and Monday, usually such joyful outdoor occasions, will be celebrated indoors and only with those members of the family who still live at home. There will be no family bake-ins at which everyone turns up and pitches in to help with the making of the lamb-filled empanadas and the crescent-shaped rubiols with their jam or custard fillings and the Easter biscuits called crespells. 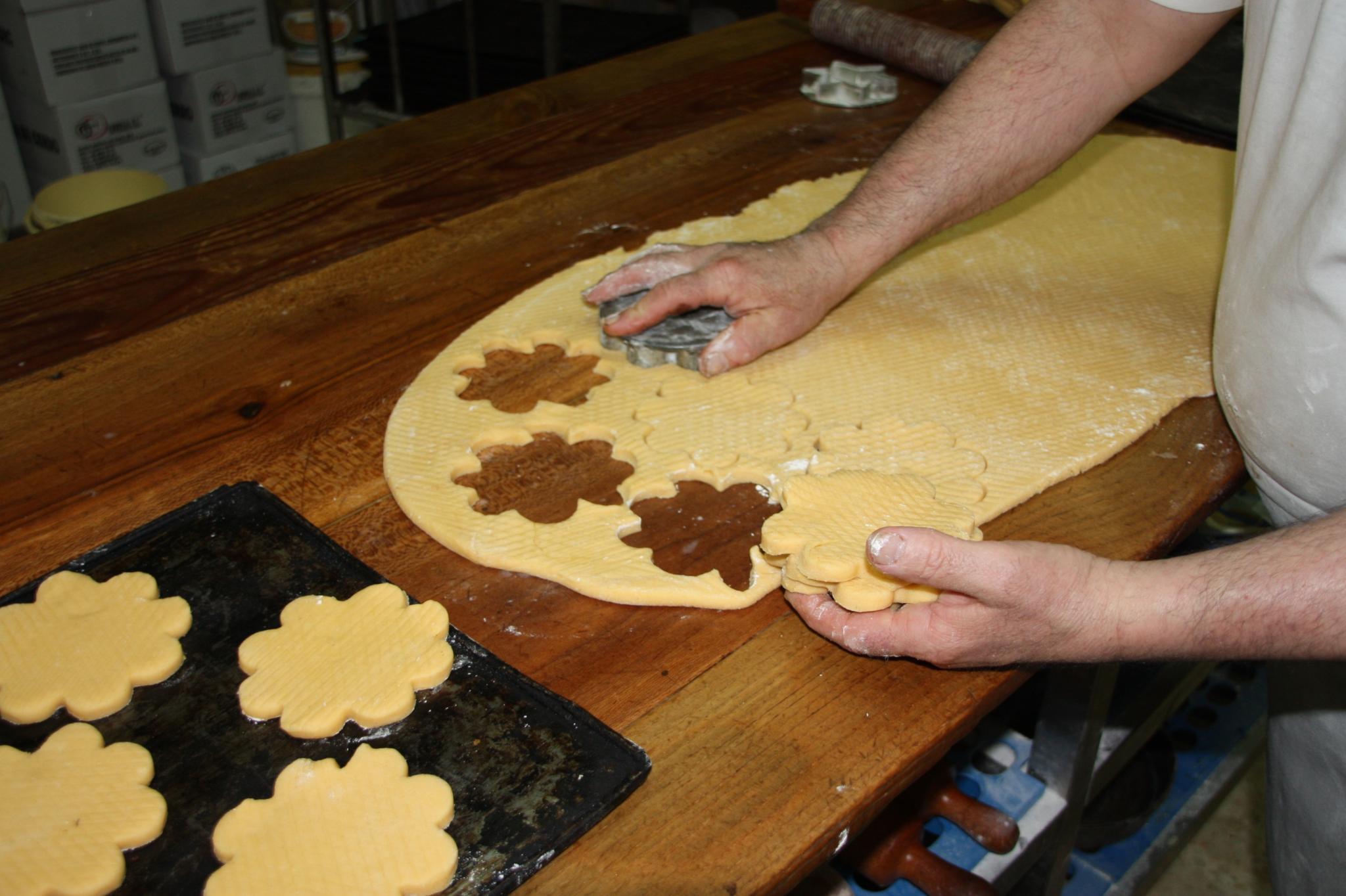 Lunch on Easter Sunday and Monday will still be special occasions and on the Sunday Spaniards will probably eat less lamb than on a normal Easter, but it will still be more than on any other day during the year. 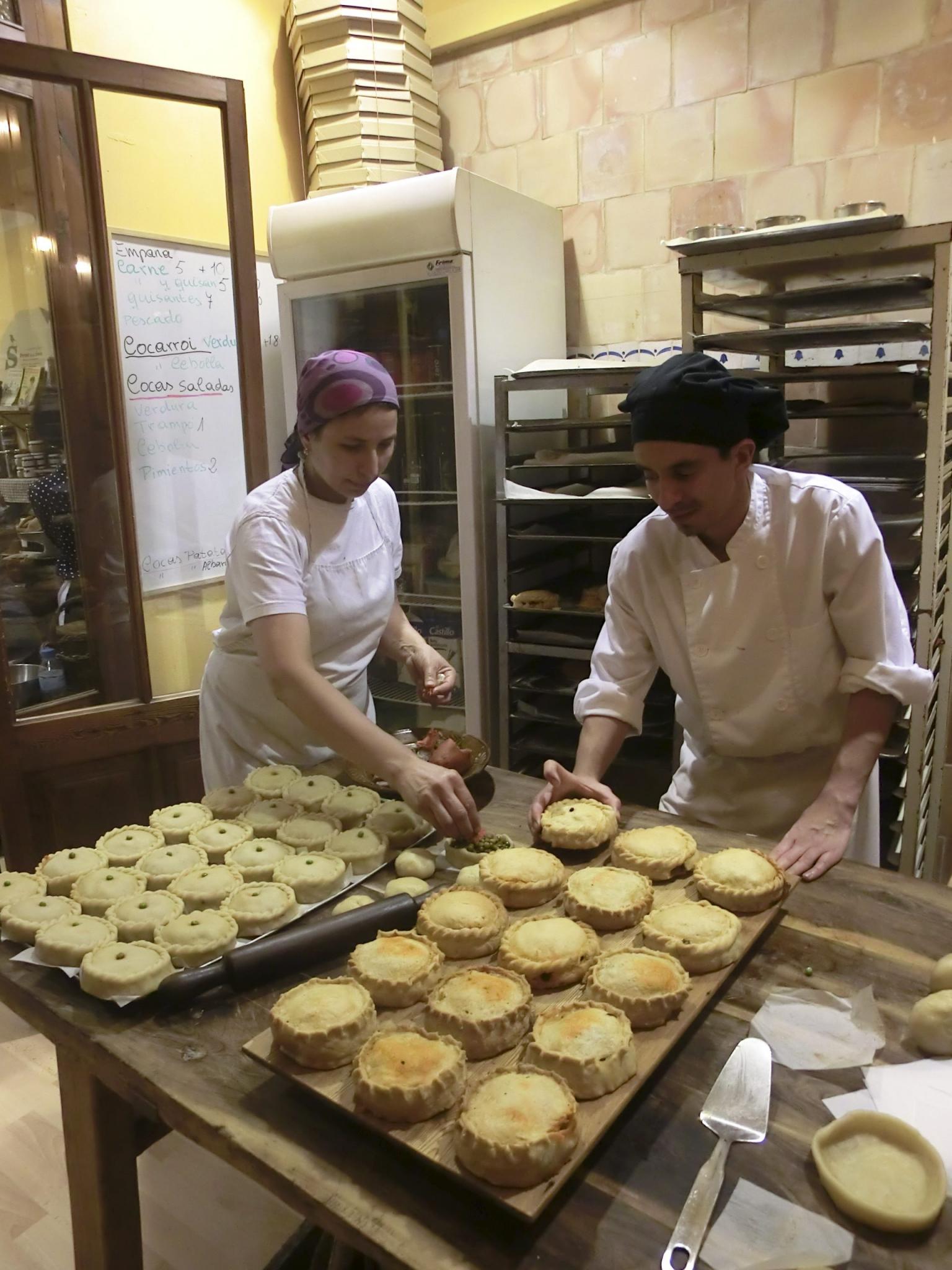 Majorcans are particularly fond of lamb and you find it in all kinds of local recipes. During Easter it’s quite common to see lamb making a triple appearance on Majorcan tables: lamb lights are used in frito mallorquín, diced lamb is in the obligatory empanadas and for many the main course will be roast leg or shoulder of lamb. 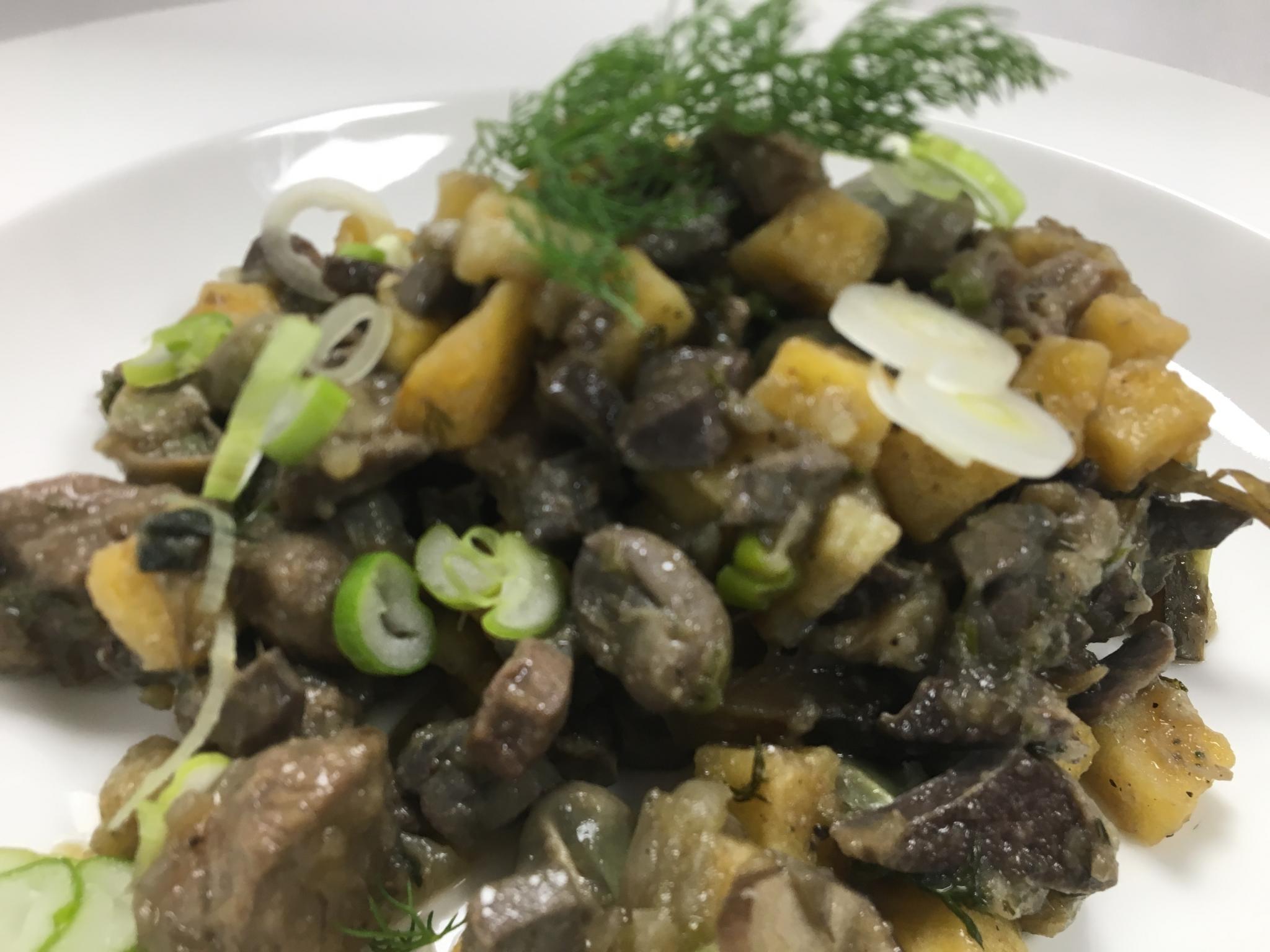 Easter roast lamb also appears on tables all over Spain as well as in Britain, France, Italy and many other countries. However, all nationalities have their on way of doing lamb — at any time of the year, not just for Easter.

Lamb is different from most other meats in that it can be cooked rare, medium or very well done — and still be a delish dish for many. The French like their lamb extremely pink, Britons favour medium done and Spaniards go in for lamb that has been roasted for a long time in a low heat.

But lamb is such an incredibly versatile meat it can survive a wide range of roasting times and everyone ends up eating lamb that is done just as they prefer it.

The only people I know who want truly rare lamb are the French and lovers of French cooking. But unlike the entrecôte steak in France, which is usually served half raw, there is never any raw meat in a rare leg of lamb: the high oven heat always penetrates the flesh and brings it to an overall pink colour.

Most Britons I know claim they like their lamb medium done, but what that means is they want it to be juicy but of a greyish colour. They don’t want to see even slight tinges of pink.

The Spanish way of roasting lamb is to leave it in the heat of a low oven for a couple of hours with constant basting. Its destiny is to be well and truly overdone — but still most enjoyable.

The French high-temperature roast is the only way of getting an all-pink finish. But for most people it takes an act of faith to roast a leg of lamb for a very short time, no matter now high the heat is.

The roasting time for a leg of lamb in France is 10 minutes per pound, meaning that a 1.5-kilo leg ( biggish one in Majorca) is in the oven for only half an hour. The flesh could hardly be less than very pink. That’s how I like it, but the friends I would eat a leg of lamb with don’t want it as underdone as that, so I seldom have it the French way.

Many years ago, when my children were young, I had a biggish leg and managed to roast it so that the thick part of the leg was French-style pink and the thinner areas were medium rare. That happened almost by accident and I rated it a huge success.

But about two years ago I was writing about underdone leg of lamb for Brisas, the weekend magazine of sister paper Ultima Hora, and I needed a picture of very pink leg of lamb. I roasted one for the French 10 minutes per pound and it was the pinkest and juiciest lamb I have ever eaten. I gave it a 10 and a gold medal.

On the other hand, there was a time when I was having English-style medium done leg of lamb for lunch every Sunday and it was always one of the best meals of the week. I never tired of it. 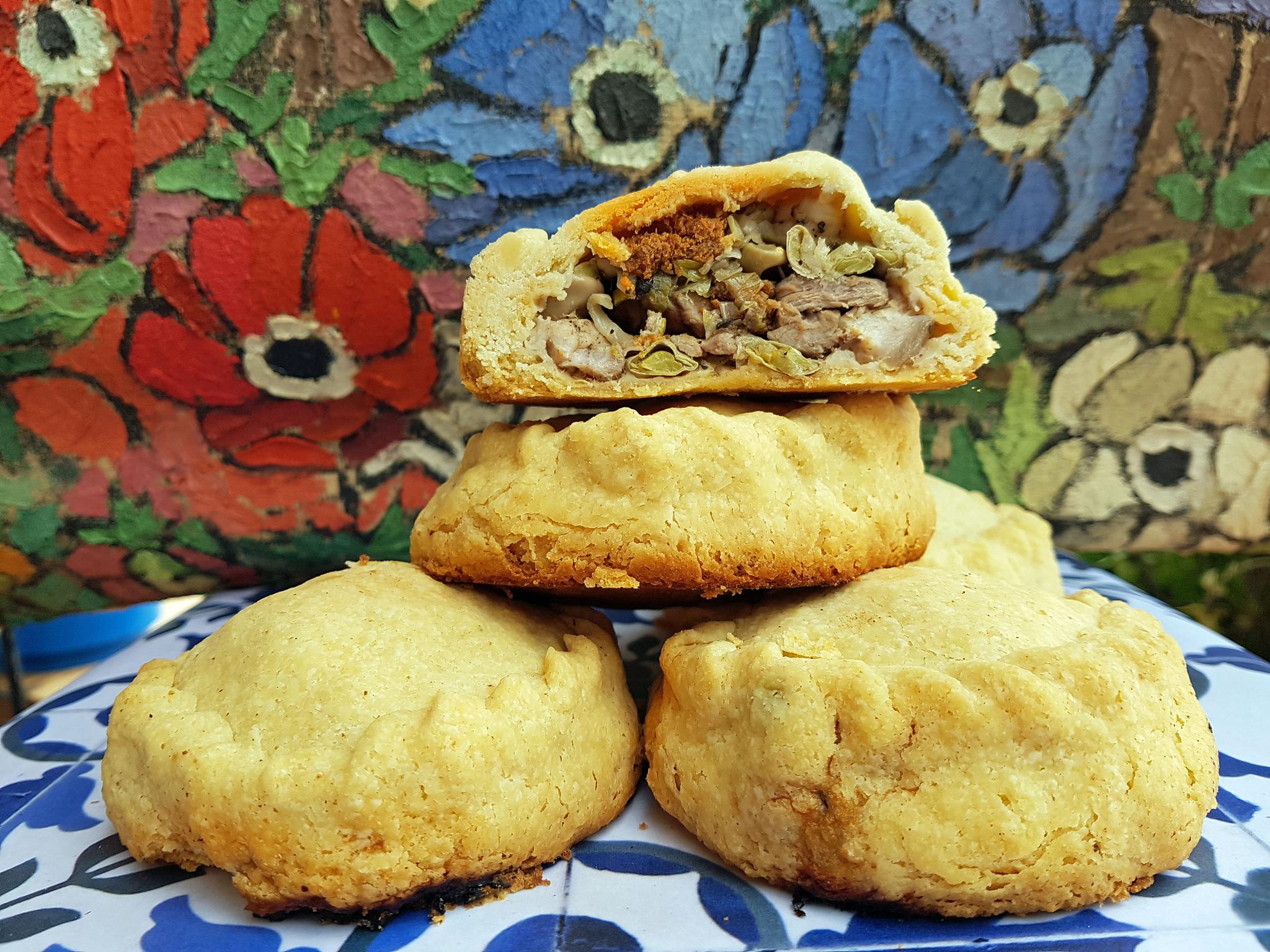 I don’t order roast leg of lamb in Spanish restaurants because it will always be much too overdone for my taste — and perhaps reheated, which is even worse. But at least twice a year I eat Spanish-style roast leg of lamb when I go to my daughter’s for dinner on Christmas Eve and for lunch on Easter Sunday.

She reckons that roast lamb is the year’s easiest festive meal. She simply seasons two 1.5-kilo legs of lamb with salt and pepper and anoints them with plenty of olive oil. The legs of lamb go into an oven at a lowish heat and she leaves them there for almost two hours.

In that time she completely forgets about the lamb and doesn’t even baste it occasionally. She opens the oven door only once: to turn the legs at the halfway stage.

Yet at the end of those two hours she produces a most enjoyable roast that everyone loves so much they always ask for seconds. After I have gnawed at the bones they go to the dog and he jealously sucks them for the rest of the day. Lamb really is the most versatile of meats — and it’s such great value for money.

Because of the lockdown I shan’t be having Easter lamb at my daughter’s this year and I’m thinking of getting a leg of milk-fed lamb that is just enough for two servings. I’ll probably pot roast it Italian style with lots of herbs and serve it atop fettuccine pasta dressed with fresh herbs and a mixture of butter and virgen extra olive oil.

All over Spain next weekend the great majority of cooks will be roasting lamb at low temperatures for a couple of hours, sometimes in wood-fired ovens. But unlike my daughter, most Spanish cooks do not abandon their legs of lamb for two hours. They mollycoddle it during that time by basting it at least every 15 minutes or so.

The basting isn’t done with the pan juices but with a special herby concoction made up to each cook’s own particular (and secret) recipe. A Spanish cook may tell you the basics of what he does to a leg or quarter of lamb but he’ll never reveal the ingredients of his secret basting mix.

But there’s no real secret to this magic potion. It even has a name: ‘brebaje’ . It consists of wine (red or white), a good dash of vinegar, olive oil and the herbs of one’s choice. The herbs can be fresh, dry or a mix. It’s their selection and quantities that make each ‘brebaje’ special.

Making your own magical brew is easy enough but you have to experiment to get the herby balance that appeals to your palate. Start with 200mls of wine (most people prefer red) of a reasonable quality. The wine you intend to drink with the lamb would be ideal.

Add a tablespoon of vinegar but not a cheap aggressive one. Look for one at El Corte Inglés made by a big winery such as Torres. You should use virgen extra olive oil because it has so much more flavour. Start off with three tablespoons.

Now comes the highly personal bit: the herbs and their amounts. Most cooks use some mint and rosemary, two herbs very much associated with lamb. But after that the herb garden is our limit and you can let your imagination (and tastebuds) run riot.

And you needn’t stick to herbs, because some of the spices pair nicely with lamb. A few coriander seeds roughly crushed in a mortar will give your lamb a very special flavour that few of your guests will be able to recognise. And a scraping of nutmeg can also work wonders.

You should write down what you are using for each new ‘brebaje’ and when you hit on the one that pleases you most you’ll know exactly what went into it.

On the other hand you can do as I do and play it like a jazz musician: improvising on basic themes and chords and getting different and fresh results every time. Cooking is often at its best when a bit of the unknown is involved, so I keep trying different condiments and quantities. It’s much more interesting that way.

If you don’t already have a butcher who supplies you with top quality legs of lamb, two of the best places at the Mercat d’Olivar are Comas and Vera. Both are easy to find. As you go into the market at the main entrance, Comas is the big stall in front of you on your left. They have a nice selection of meats and the quality is top rate. To get to Vera, turn left as you go in the main door until you come to the second aisle. Vera is on the corner opposite the Llofriu coffee shop.

The best way to shop at the Mercat d’Olivar, especially on festive occasions like Easter and Christmas, is to get there at about 8am. You’ll be served almost immediately and you’ll get the first choice of the available legs of lamb. The best legs are always snapped early in the morning and latecomers have to make do with what’s left.

If you’re cooking for two and don’t want to have a lot of leftover roast, a shoulder or leg of milk-fed lamb is your best bet. You’ll find plenty of both at El Corte Inglés and they also have a good selection of fresh and dry herbs.