‘Just do as you are told’ is the mantra. The instructions change for some workers this week as they return to work today. These are the builders who were working until two weeks ago this also means, that other companies supplying the builders can also resume work. Social distancing is teaching us all to queue without any pushing in. The conversations as you wait in line, can be the only ones you have with a physical presence all day. We are all learning how to Zoom and Skype but nothing replaces talking to another human being while you wait your turn.

My L’horta zone of Soller has a little supermarket, an organic vegetable shop, a baker and a takeaway. Last Saturday morning there were queues in front of them all so it was just a great excuse to hang about in the street with permission. The takeaway is cooking an 8 euro three course menu of the day. The elderly regard this as their Monday to Saturday lifeline and many others use it because they are fed up of cooking. 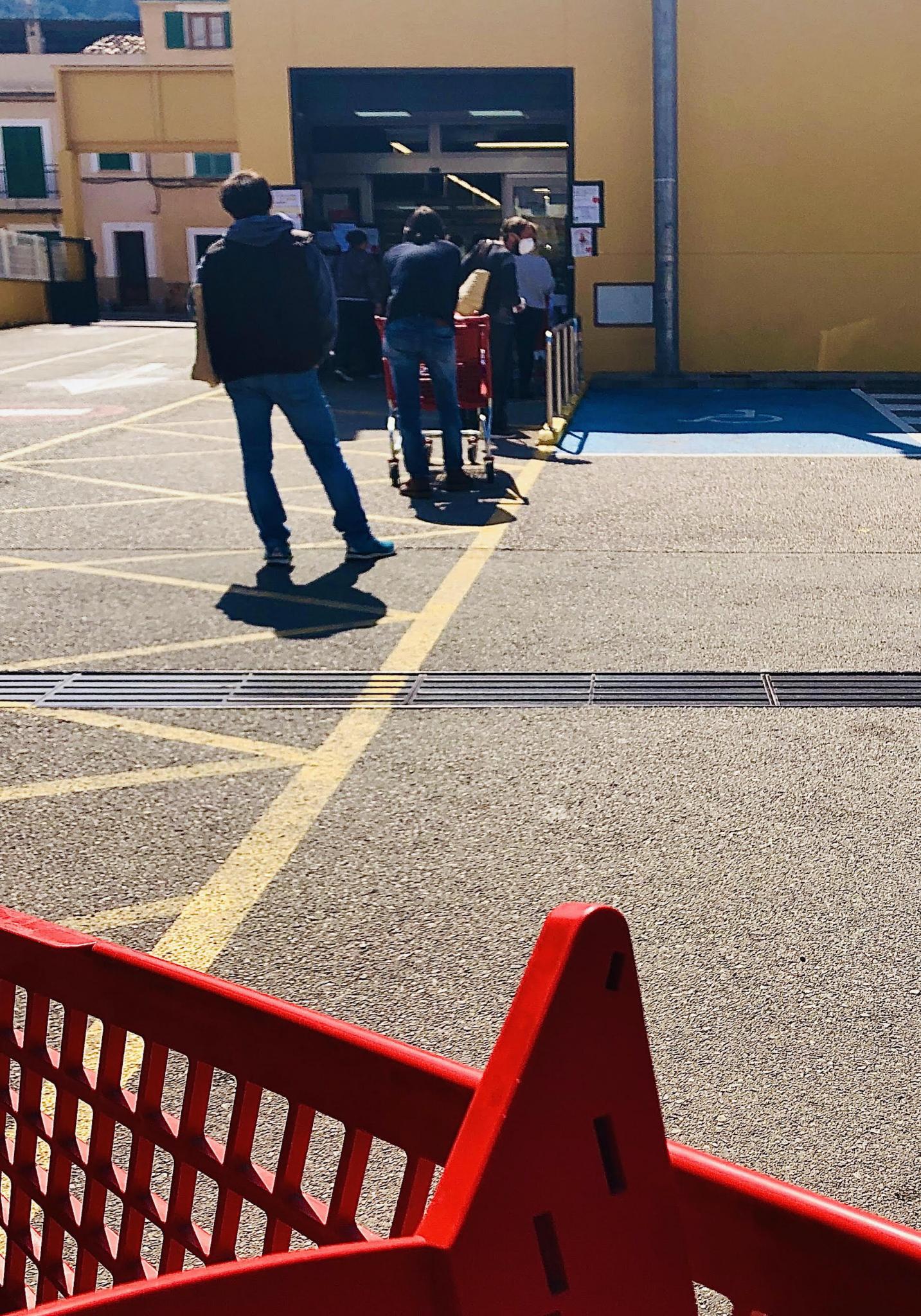 This location is near the Pont d’ Barona bridge and one of the important sites for the Soller Firo battles. The Firo has now been officially called off for this year. All done with great reluctance and the innovations have already started to keep the spirit alive. Last Saturday the Valley was encouraged to hang their Firo flags and dress in the traditional costumes for a social media Facebook opportunity. When the 8 pm claps occurred it was with the blessing of the flags and the music. The best night of all for ‘la Balangera’ to resound in our world.

Last week I told the story of resident Barry Byrne and his Go Fund initiative for the Food Bank of Soller. I am delighted to report that 4,000 euros has been achieved so far. This has been gratefully received by the Red Cross, Caritas and Soller Social Services who are organising the distribution. The English speaking community stepped up to the plate when this call went out and everyone is grateful.

The future is now occupying the thinking of many. The return to work of the builders this week allows many to think that their own offices will again be accessible. Working from home has been possible for many in the short term but is not viable for long term plans. The mixed messages about airlines flying against countries saying that all incomers will have to serve two weeks’ isolation when they arrive is now verging on the ridiculous. Soller Hoteliers are thinking along the lines of Spanish tourism saving the day for the remainder of the year once the all clear is given for travel.

Not everyone in the Soller Valley is here because they want to be. Every day there are frantic calls to the Embassies to see when the next repatriation flights are going to be. ‘Stranded in Soller’ has a good ring to it but it is very hard for those that are. One local couple on a mission to get back to the UK found a route involving four planes and a huge amount of money. They have given up, as the risk of catching something enroute with such a convoluted journey was not one they were prepared to take.

At Sollerweb work goes in keeping everyone informed about the Soller Valley. Our function is to keep the place alive in the thoughts and plans of many for the future. We are also asking for favourite pictures of the Tramuntana to be sent to us. A few words of why the picture is your favourite would be great. We will share the pictures on all the social media outlets used by Sollerweb over the next few months. Then, at the end of the year, we will create a book of pictures and comments ready to be sold. The income from sales will be used for Soller charities and to help with the ongoing work lack of income will cause locally. Put this book on your Christmas present list now! In the meantime, please send us you favourite photograph to info@sollerweb.com

So we have a book in the pipeline and we are also in the middle of recording the ‘Quarantinies’ song! Words by Georgie Insull and music courtesy of the ‘Ovaltinies’. We are being very creative in these funny old times and enjoying the ‘all in it together’ concept that is very evident. Hope that is your experience too..

Why Soller, Soller , Soller?? There are other villages and towns much more interesting. I find using a different song than that the Islanders already use to go along with their clapping ..that is RESITIRE ..so very typically English and ARROGONT.