Joaquim Verdaguer was a Majorcan writer who died in Palma in 1966 at the age of 71. He was highly educated, spoke English, German and French and was an English teacher. Part of a literary circle in Palma, he was a frequent contributor to island newspapers and magazines. His writings also appeared in foreign publications, one of which was “Paris Baleares”.

Referred to as a magazine, it was more of a newspaper and was founded in 1954 by Les Cadets de Majorque, the association of people from Majorca and the Balearics who were resident in France as well as descendants of people from the islands. Between 1954 and 1998 there were 377 issues. In the sixties and seventies it is reckoned that up to 2,500 copies were printed.

Six years before his death, “Paris Baleares” ran an article by Joaquim Verdaguer which, given its subject, was to provoke interest beyond the paper’s limited circulation. In the May 1960 edition was the headline Los Bonapart de Mallorca. The article made the case for Napoleon (and the other Bonapartes) having been descended from a Majorcan - Hug (Hugo or Hugh) Bonapart. 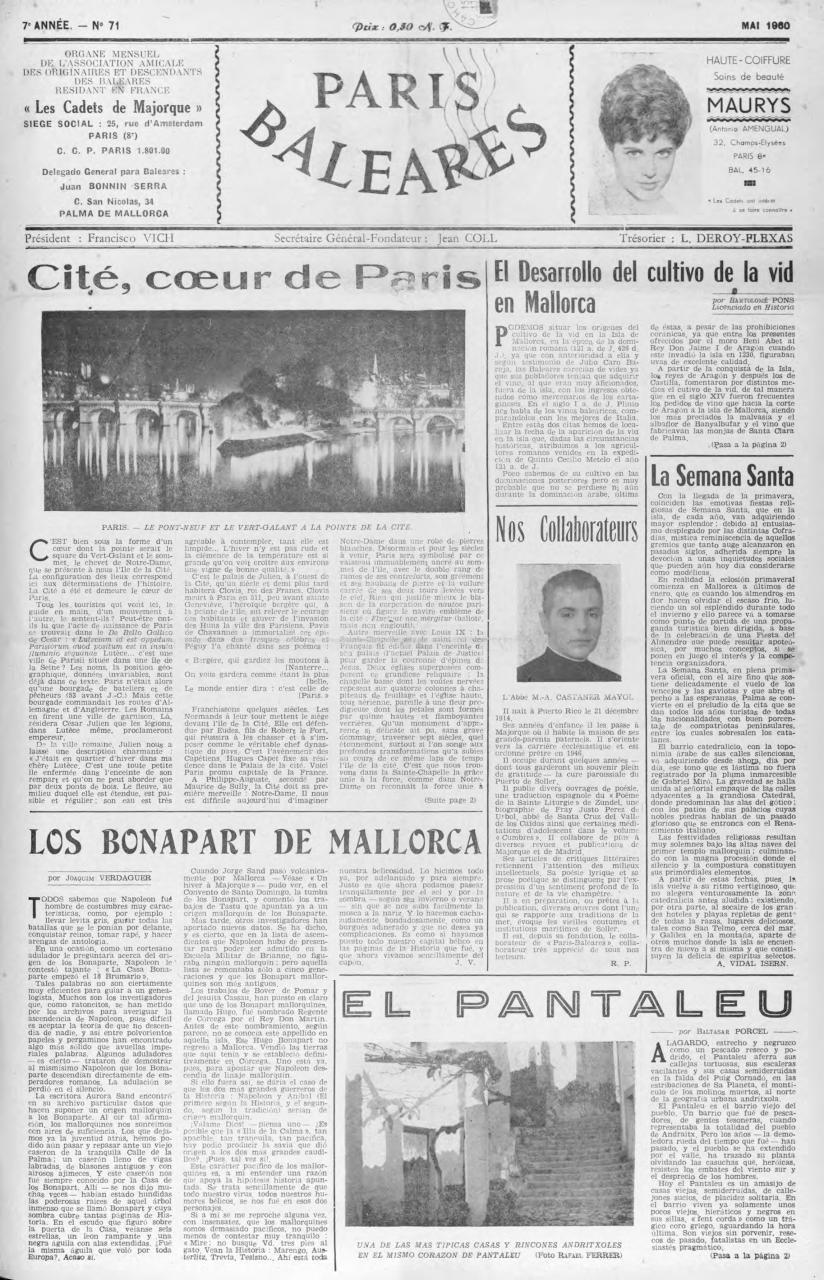 Napoleon, as you will doubtless know, was born in Corsica - Ajaccio to be precise. But what were the origins of the Bonapartes? Napoleon was apparently once asked where they had come from. All he would say was that the House of Bonaparte had begun on the 18th of Brumaire, this having been an autumn month in the French Republican Calendar that was named after the French for mist, “brume”.

In his article, Verdaguer highlighted a reference from George Sand to the tomb of the Bonaparts in the Sant Domingo Convent in Palma, which had been demolished in 1837, the year before she and Chopin came to Majorca. Her granddaughter, Aurore, was to later present the idea that Napoleon’s roots were Majorcan. Verdaguer commented that this notion was met with a “smug” smile by some in the know. There was that old house which was known locally as Casa de los Bonapart. It had coats of arms. There was a shield on the door with six stars, a rampant lion and a black eagle with outstretched wings. The French Imperial Eagle of Napoleon’s Grande Armée?

While this may have been pure coincidence, Verdaguer was interested in more historical fact, and this came from the works of “Bover de Pomar and the Jesuit Cassau”. They had made clear, he wrote, that one of the Majorcan Bonaparts, Hugo, had been appointed regent of Corsica by King Martin the Humane in 1409. Martí I was the King of Aragon and, among other places, Corsica and Majorca.

This Hugo sold his land in Majorca and settled in Corsica, never to return. Before he was appointed regent, so the research indicates, the Bonapart surname was apparently unknown in Corsica. It is possible that it had existed before Hugo’s arrival, but there is no documentation to verify this. The conclusion was, therefore, that Napoleon was descended from Hugo.

Verdaguer didn’t go into any great detail. If he had, he might have revealed that in May 1419, Hugo granted wide-ranging powers to his brother, Bartolomé, to sell his properties in Majorca. Having decided that he wouldn’t be returning to Majorca, Hugo instructed his brother to forward the benefits from this sale to the children of he and his wife, Juana de Saucis.

The first documentary evidence of the Bonapart name in Majorca comes from the mid-fourteenth century. Where the family came from isn’t known, but it can be assumed that they were from the Aragon kingdom, but almost certainly not from Corsica, which from the early fourteenth century was under the Kingdom of Sardinia, itself a part of the Aragon crown.

The lineage, from Hugo to Napoleon, seems pretty much indisputable. Seeking to establish the connection between Majorca and Corsica had predated Napoleon’s birth in 1769. In 1752, one Jerónimo Agustín Alemany, who was the official chronicler in Majorca, wanted to find out if the Bonapartes of Corsica were descended from the Bonaparts who had left Majorca in the fifteenth century. The children (Esteban, Hernando and Andrés) had all gone to Corsica as well; Juana may well have been deceased, this isn’t clear.

The contact that Alemany had was with a Jesuit named Eusebio Cassan (Verdaguer had referred to him as Cassau). He was able to confirm the connection. Several documents, he explained to Alemany, proved that the Bonapart family from Majorca had become established in Ajaccio.

As for the Bonapart family which remained in Majorca, it would seem to have died out in the mid-sixteenth century with a Bautista Bonapart.