A couple of weeks ago I was writing about how many people get into a huge tizz when cooking some of the easier dishes. In that case it was plain white rice, the kind we serve with chicken curry and other Asian and Middle Eastern dishes.

But it could also have been any of the egg dishes: boiled, fried, scrambled or omelettes. In surveys that are carried out in Britain from time to time, some 50 per cent of the population admit they run into difficulties when trying to turn out a decent egg by any of the various cooking methods.

It doesn’t surprise me that millions of Britons still have so much trouble with eggs — because hundreds of millions worldwide have the same problem.

Although cooking eggs by any of the above methods looks simple enough, the making of a competent version is actually one of the more difficult of kitchen tasks.

Of someone who isn’t a very good cook, we often say: “He can’t even fry an egg.” But it’s not at all easy to fry an egg properly and just as problematic to boil or scramble one. And poaching an egg is so full of pitfalls that even experienced amateur and professional cooks sometimes make a mess of it.

When we cook eggs by any method, the number one golden rule is: perfect freshness. A recently laid egg should have a thick collar of white round the yolk, plus a thinner ring of white. That is the essential basis of the ideal fried or poached egg.

As an egg approaches its sell-by date the white loses its elasticity and becomes loose. Eventually it’s as runny as water. When that happens not even Jamie Oliver or Gordon Ramsay could fry or poach it: the watery white spreads all over the frying pan and becomes a mess.

Lack of freshness is not a problem these days if we get our eggs from a supermarket or shop with a quick turnover. The eggs at Mercadona and El Corte Inglés are always extremely fresh. Mercadona’s XL eggs are especially large and at €2.17 dozen are great value for money.

The perfect poached egg is not at all easy to achieve and it’s the one that causes most difficulties. One common way of poaching an egg is to bring acidulated water in a small frying pan to a simmer and then swirl the water with the back of a tablespoon until a whirlpool appears in the centre.

When the egg is poured in, the whirling motion stops the white from spreading. That, at any rate, is the theory. But other factors are involved: the water must be very hot but not boiling, and the whirlpool must be going round at a fast speed.

If you attempt to poach an egg by pouring it into simmering water to which you have added a spot of vinegar, at best your egg will have ragged edges. For some dishes you would then have to trim the white to give it a neat appearance.

You can poach eggs that don’t need trimming by using muffin rings as a mould. I get good results by bringing 3cms of acidulated water to the boil in a frying pan in which I have placed two rings.

Using one egg per ring, I pour in the egg in two stages from a small coffee cup. I first add enough white to coat the bottom of the ring, which coagulates in seconds, and then add the rest of the white, trying to get the yolk as near centre as possible.

The egg then sits in the simmering water, with the lid on, until the white sets and the yolk is still runny. This takes about two minutes. The easiest way to remove the egg from the mould is to go round the side with the point of a knife and then lift off the ring.

If you pre-poach your eggs for later use, keep them under cold water until needed. You can refrigerate them for a day or two but you will get better results if you use them immediately.

Poached eggs on a toasted roll or bread are ideal for breakfast but you can also easily turn them into tasty snacks. You can sauté crustless bread in butter until golden, put a poached egg on top and cover with bechamel or mornay sauce and top with a grated cheese of your choice. Grill until the cheese melts and bubbles.

You can also make a thick bechamel sauce to which you have added thinly sliced mushrooms, chopped ham or shelled prawns gently sautéed in butter. Spread this piping hot mixture on golden sautéed bread and top with a poached egg.

A variation of this theme is to make a bed of flaked fish or shellfish in individual ovenproof dishes or scallop shells, add a poached egg to each dish, nap with mornay or bechamel sauce, sprinkle with grated cheddar or grana padano cheese and dot with small pieces of butter. Grill until golden.

Poached eggs dishes that have to be finished off under a grill or in the oven, should be cooked until the white is just set and the yolk very runny.

You can also serve poached eggs on buttery creamed vegetables such as spinach, carrots, celeriac or anything that takes your fancy. A layer of mashed potatoes, well flavoured with lots of finely chopped parsley, basil or other herbs, is also a good choice.

A friend handles eggs better than most people I know: her fried eggs are mainly good enough, her scrambled eggs more than passable and her soft-boiled eggs are quite perfect. 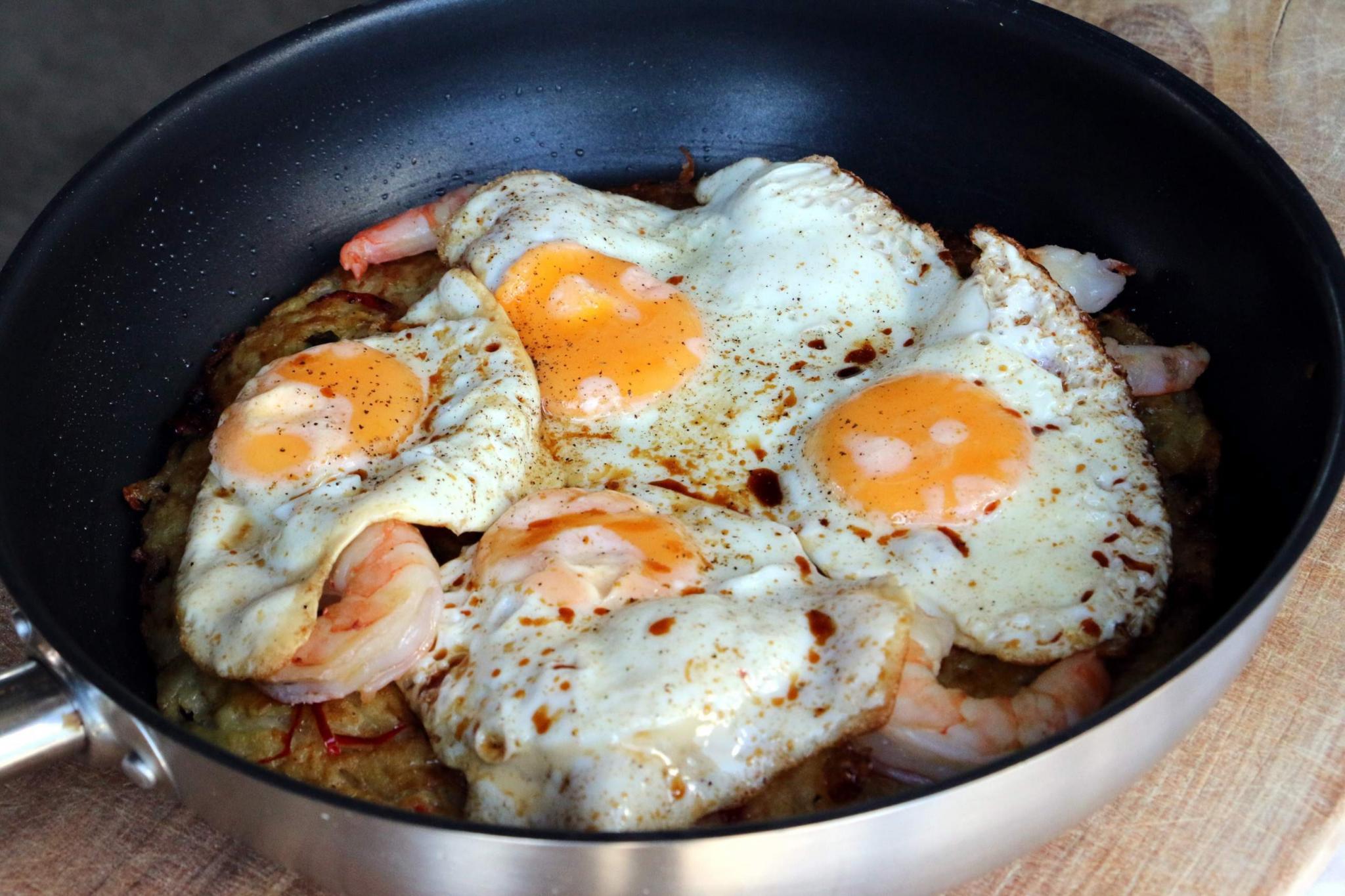 But she cannot manage a good plain omelette. Hers are always dry and leathery or they end up as an unpalatable runny mess. She wonders if there’s some secret involved in turning out the kind of omelettes she has eaten in France. Others before her have asked the same question, including a group of famous writers and gourmets who were absolutely baffled at how Mère Poulard made her incredible omelettes.

She was the cook-owner of the Hotel de la Tête d’Or in Mont-St Michel on the Normandy coast where she served a fixed menu every day of the year. It was: an omelette, cooked ham, a fried sole, pre-salé lamb cutlets with potatoes, a roast chicken and salad, and a dessert.

The omelette, which she always cooked, was extremely light and there were many theories as to how she could achieve such exquisite results with three eggs. Some were sure she had a special frying pan, others had heard she added a splash of water to the beaten eggs, others that a little cream was beaten in at the last moment. Some even thought the eggs came from a very special breed of hen.

One day in 1932, a famous Parisian restaurant owner called Robert Viel was so tired of the endless conjecture surrounding the great cook’s omelettes that he wrote to her to find out her secret. Mère Poulard, who by this time had retired, replied in the following words: “Monsieur Viel, here is the recipe for my omelette: I break some eggs into a bowl, I beat them well, put a good lump of butter into the frying pan, I add the eggs and I stir them constantly. I am happy, monsieur, if this recipe pleases you. Annette Poulard.”

So that’s how easy it is: no mystery, no tricks, no esoteric touches like special frying pans or a super breed of laying hens. But her simple words need a bit of further explanation.

Before going any further we will take a look at what an egg is: food for feeding a bird. Some mammals also lay eggs but we don’t use them in the kitchen. The eggs of all birds are edible, but cooks are mainly concerned with hen eggs and those of other domestic fowl.

It is most important to remember eggs are full of protein and they react like other animal protein when heat is applied. Meat protein is made of muscular tissue but eggs do not have muscles, so when they are cooked they coagulate and go hard.

This allows us to cook eggs in a wide variety of ways and we can also make use of the egg’s special properties, such as its ability to coagulate. This means eggs can be used to blend sauces, form emulsions, bind stuffings and to thicken the sauces and custards use in pastry-making.

When making an omelette it is important to have the right kind of frying pan but it is not necessary to keep it specially for omelettes — and it is sheer affectation to say it must never be washed.

The right size is fundamental. For a three-egg omelette the inside base should be not less than 15cms and not more than 17. That will give you an egg mixture of less than one centimetre deep which is what is needed for turning out an omelette with a characteristic layered structure.

If you have a cast-iron or copper frying pan all to the good but even the cheap metal pans with green handles sold at some supermarkets and hardware stores are suitable. Avoid stainless steel, aluminium and, most of all, teflon and other non-stick pans. It should always be perfectly clean and should be put on a high heat until the dry base is very hot.

The eggs should be mixed only long enough to lightly blend the whites and the yolks. I get better results by stirring them rather than beating them. Never mix the eggs until you’re ready to make the omelette — and add salt at the last moment.

An omelette will look and taste different depending on whether it is cooked in butter or olive oil. Butter gives a lighter texture and a more elegant flavour. Put a heaped tablespoon of butter into the very hot pan, swirl it round to cover the base and tip in the freshly mixed eggs. From this moment on you have to work very quickly.

As soon as the egg mixture hits the hot frying pan it starts to coagulate and a skin is formed on the underside. With a spatula or a fish slice, and starting at the near edge, push the egg mixture towards the centre. Keep tilting the pan so the uncooked mixture at the top keeps running backwards to occupy the space you have made for it.

This new lot of egg mixture will form a skin which should also be pushed towards the centre. As this movement is repeated you create a series of folds or layers that are the hallmark of a well-made omelette.

When the surface is still slightly runny, fold the omelette over on itself two or three times, tip on to a warmed plate and serve immediately. An ideal plain omelette should have a neat regular appearance, the interior layered effect and it should be light and moist on the inside.

The total cooking time once the egg mixture hits the frying pan should be around 50 seconds. If the protein in the eggs cooks for too long it goes past the coagulation stage and you end up with a leathery and dry omelette.