There are many things in life I never do and one of them is drink in Palma bars. There’s usually a TV set blaring in one corner and the customers are unnecessarily shouting at friends sitting or standing right next to them. I do not find that kind of din attractive in any way.

So at no time during the confinement was I longing for the opportunity to drop in for a coffee or a beer. I do go to a restaurant once a week to eat and write a review, but not for one minute did I miss restaurants, which are also places with decibels at highly stressful levels.

However, there is one little item I have longed for since day one of the confinement — my weekly caña. I have a glass of red wine with lunch every day at home but when I eat out I order a caña. One caña per week. The first sip always tastes as if I am drinking the best beer in the world. I have missed that sip and the following ones until the glass was empty.

I could have bought one of the excellent German, Belgian Czech, English or French beers in cans and bottles at El Corte Inglés and had it once a week at home. But even the finest beer I can buy in Palma is no substitute for a well-pulled ice-cold Spanish caña.

I already know which restaurant I’ll be going to when they re-open on the 25th — the noisiest and most tightly packed eaterie in central Palma with the space between the table so narrow that even a skinny six-year-old can hardly get through and with waiters and customers brushing against both of my shoulders as they clamber to get to the other side of the dining room. It is so uncomfortable in there that I am always glad to get out into the relative quiet of a broad and traffic-crammed main street.

They do very decent Spanish regional dishes which is the only reason (as well as the caña) for which I keep returning from time to time.

With the new post-confinement rules in place — which will include space enough between the tables for a mother to push her twins in their double pram and with the greatest of ease — it will be a real pleasure to eat there in peace and quiet.

And I know what I’m going to order: potato salad (it’s a house speciality) and paella (another pet yen during confinement). And, of course, my first caña in more than two months. 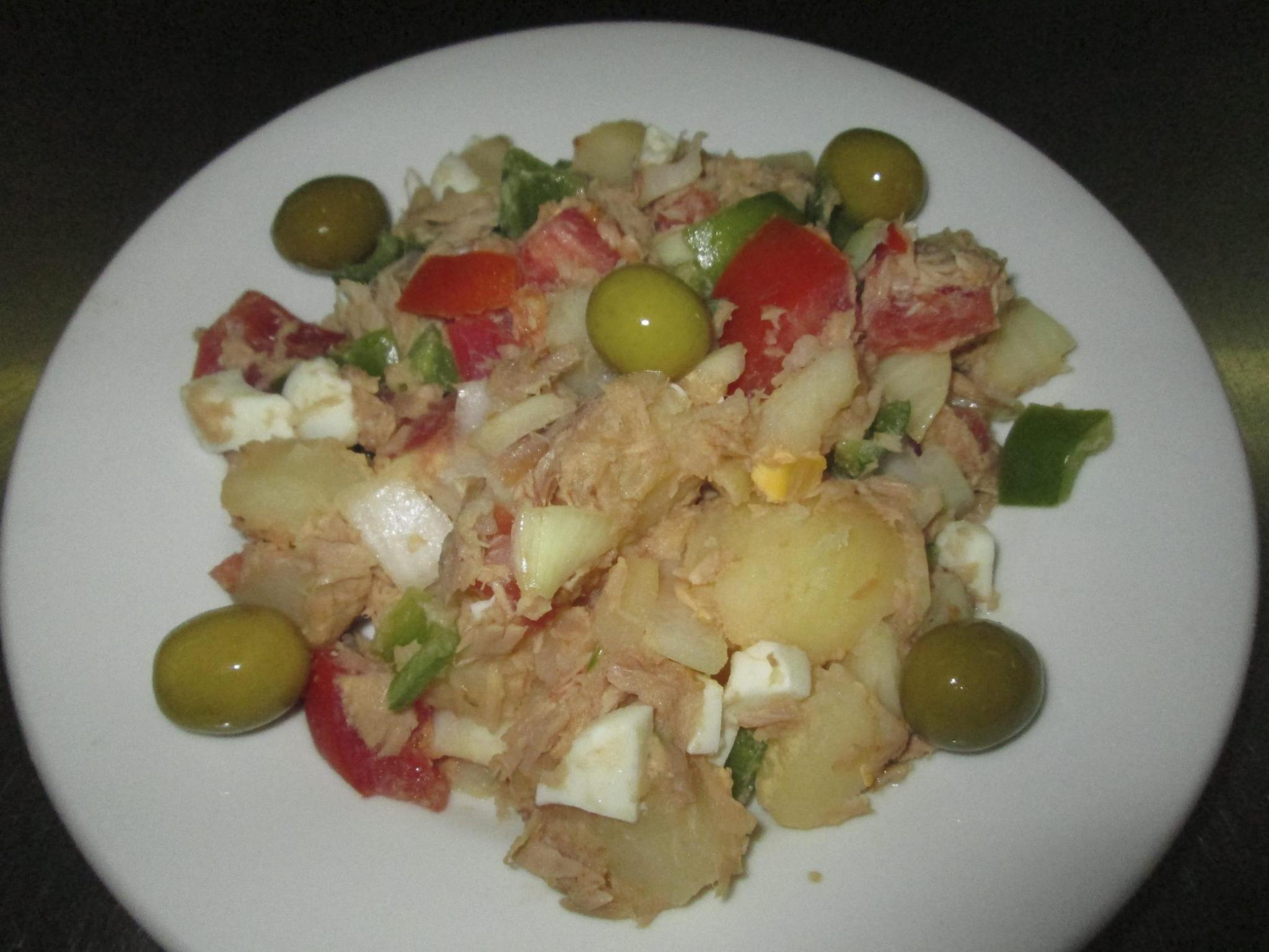 There must be some people who dislike potato salad, but I have never met one. It’s one of those dishes everyone seems to adore. Very few cooks do a basic potato salad, one made with nothing but potatoes and mayonnaise — everyone wants to add other ingredients to make their salad extra special.

Some include anchovies, others roasted red peppers, tinned tuna, boiled prawns or snippets of crisply fried bacon. Black olives are a favourite addition, both for their taste and for contributing a dramatic spot of black to what is essentially a white dish.

Some people add cold meats: leftover roast chicken, boiled ham, slivers of roast pork, thinly sliced salami and all kinds of white fish and shellfish. These ingredients can be used to raise the status of a potato salad to that of a quick luncheon dish when we don’t have time to do something more elaborate.

When we think of potato salad we usually visualise one smothered in mayonnaise, but one of my favourites doesn’t contain even a speck of mayo. It’s the classic and basic Spanish version dressed with virgen extra olive oil, a little red wine vinegar and finely snipped spring onions.

This kind of Spanish potato salad (the French do a similar one) will always taste better if you drizzle the vinegar over the potatoes as soon as they are drained. Leave them for 10 minutes before adding the oil. Most Spanish housewives add strips of roasted red peppers, anchovy fillets and pitted black olives.

You should always use waxy potatoes such as the small Majorcan ‘patató’ on sale at most supermarkets.The open-air market in the Plaza Pedro Garau on Tuesdays, Thursdays and Saturdays, usually has other waxy varieties.

Opposite the old Bulletin offices in Calle San Feliu, there used to be a tiny tapas bar that did an unusual potato salad. It was simple and basic, consisting of boiled potatoes dressed with olive oil, roughly chopped hard-boiled eggs, plus a few capers. And nothing else.

The cook was unorthodox in that she used floury potatoes, so they disintegrated when the other ingredients were mixed in, leaving only a few lumpy bits here and there. I found it most enjoyable and I usually ordered it when I nipped out for a couple of tapas and a caña.

At the time I was surprised the cook used floury potatoes but I simply thought this was her personal take on a potato salad. Perhaps it was more economical, or involved less work than a conventional version made with waxy potatoes that don’t fall apart when cooked.

But many years later, when reading Claudia Roden’s first edition of A Book of Middle Eastern Cooking, I came across the same potato salad. It turned out to be a Sephardic dish, which accounted for its presence at the tapas bar: it was almost certainly a potato salad as made in the homes of Palma’s Jewish community.

The Roden recipe differed only in that it was more sophisticated and included butter, which adds a rich succulent touch. It’s a most highly recommendable potato salad.

Peel the potatoes, cut them into wedges of roughly the same size and boil them in salted water until just soft. Drain them and put them into a deepish bowl with the butter cut up into small pieces.

Mix the butter into the potatoes with a fork, at the same time gently breaking them. Season them with a small amount of black pepper and add 70grs of the capers. Drizzle over some virgen extra olive oil, but not too much to begin with.

Shell eight of the hard-boiled eggs, chop them roughly and mix them into the potatoes. If the mixture looks a bit dry, add more olive oil. Let the salad rest for an hour and mix in more oil if necessary. The potato salad should be well lubricated but not swimming in oil.

This potato salad is unusual and so delicious it will quickly disappear when guests start to serve themselves.