In 2016, Nico Rosberg finally beat his great rival and Mercedes-AMG Petronas team mate, Lewis Hamilton, to become F1 World Champion. Five days later he dropped a bombshell, he was retiring from motorsport. Nico’s dream was to win once and, having achieved his dream, he was able to walk away full of confidence and gratitude. 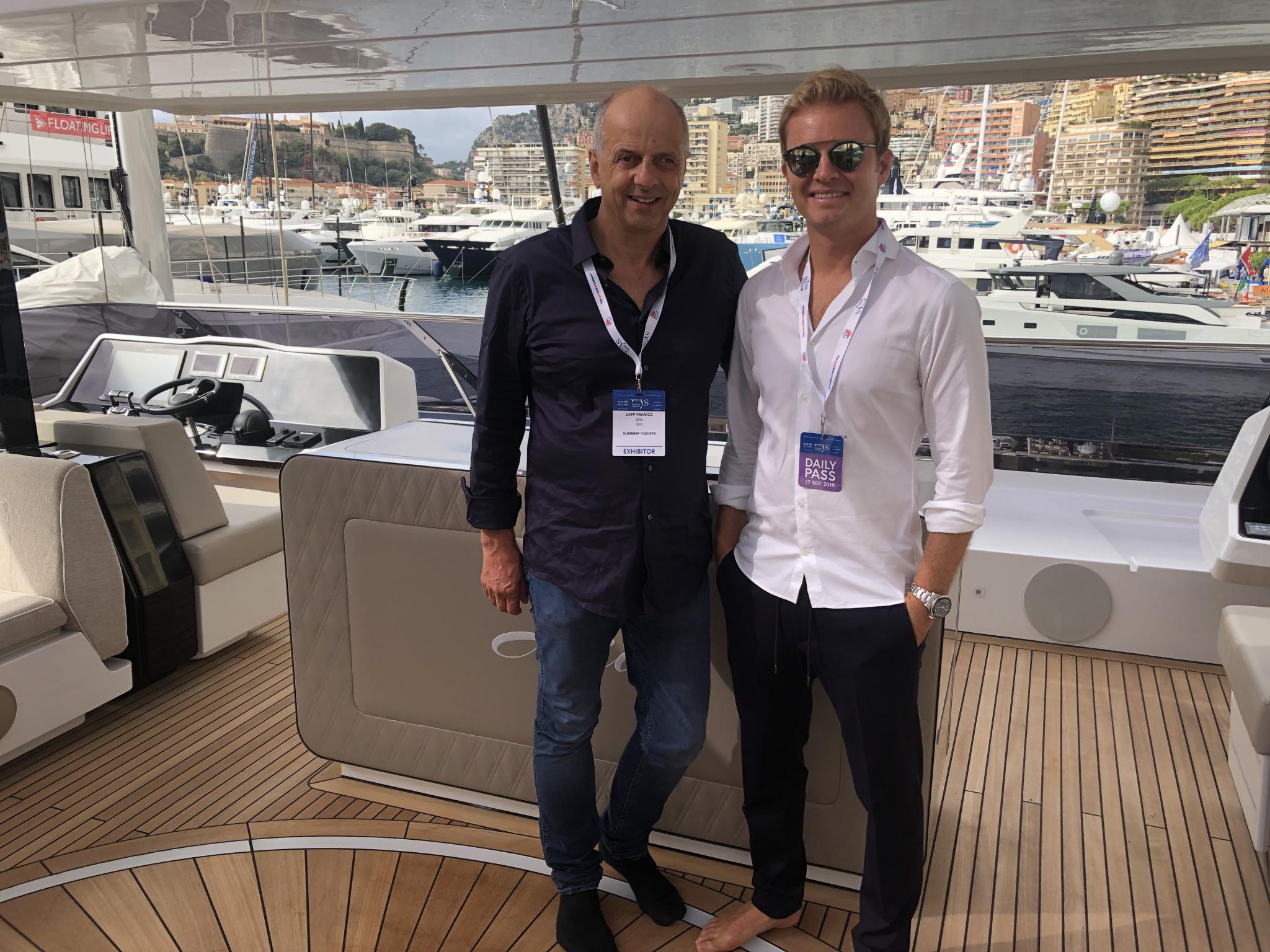 Nico sees himself as a man who wants to be of service, do good, bring benefits to others and bring happiness to himself, and one of his great passions is to instil sustainability into everyday culture. Inspired, in part, by Elon Musk, the 34 year old has now reinvented himself as an eco investor and entrepreneur, and is juggling projects in everything from electrical vehicle racing to air taxis. Nico also hosted his inaugural GREENTECH Festival in Berlin in May 2019, but has inevitably postponed the follow-up 2020 edition until later in the year.

The current pandemic has not knocked Nico off course, far from it. Instead, it has given the charismatic Monaco-raised German more time to be creative and delve deeper into the newest green technology. Sunreef Yachts is one company that he has turned his attention to. Nico has taken note of the Gdańsk-based builder’s new ECO range of sailing and power yachts - claimed to be the most sustainable luxury yachts in the world. Sunreef Yachts’ Founder and President, Francis Lapp, has a passion for F1 and a passion for eco innovation, so the two gentlemen have plenty in common. 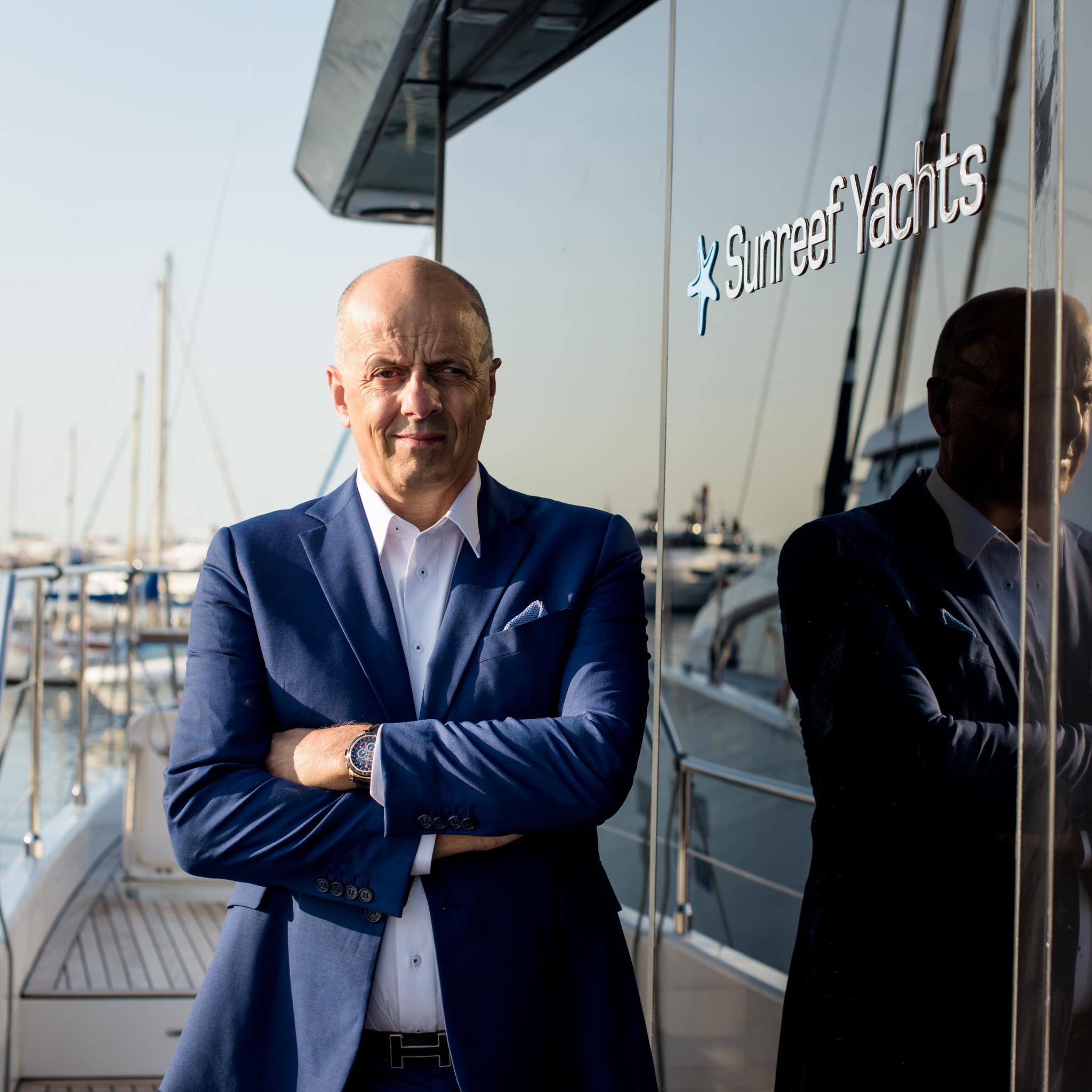 In fact, Francis is pretty inspirational himself. Born in France in 1958, he started out his career in electric power and construction and, after holding managerial positions in major companies, decided to found his own. An avid rally enthusiast, he visited Poland to take part in a race held by Warsaw’s Automobile Club and was impressed with the country’s immense development potential. Francis chose to establish his business there and became a successful manufacturer of electrical equipment, as well as providing design and installation services. 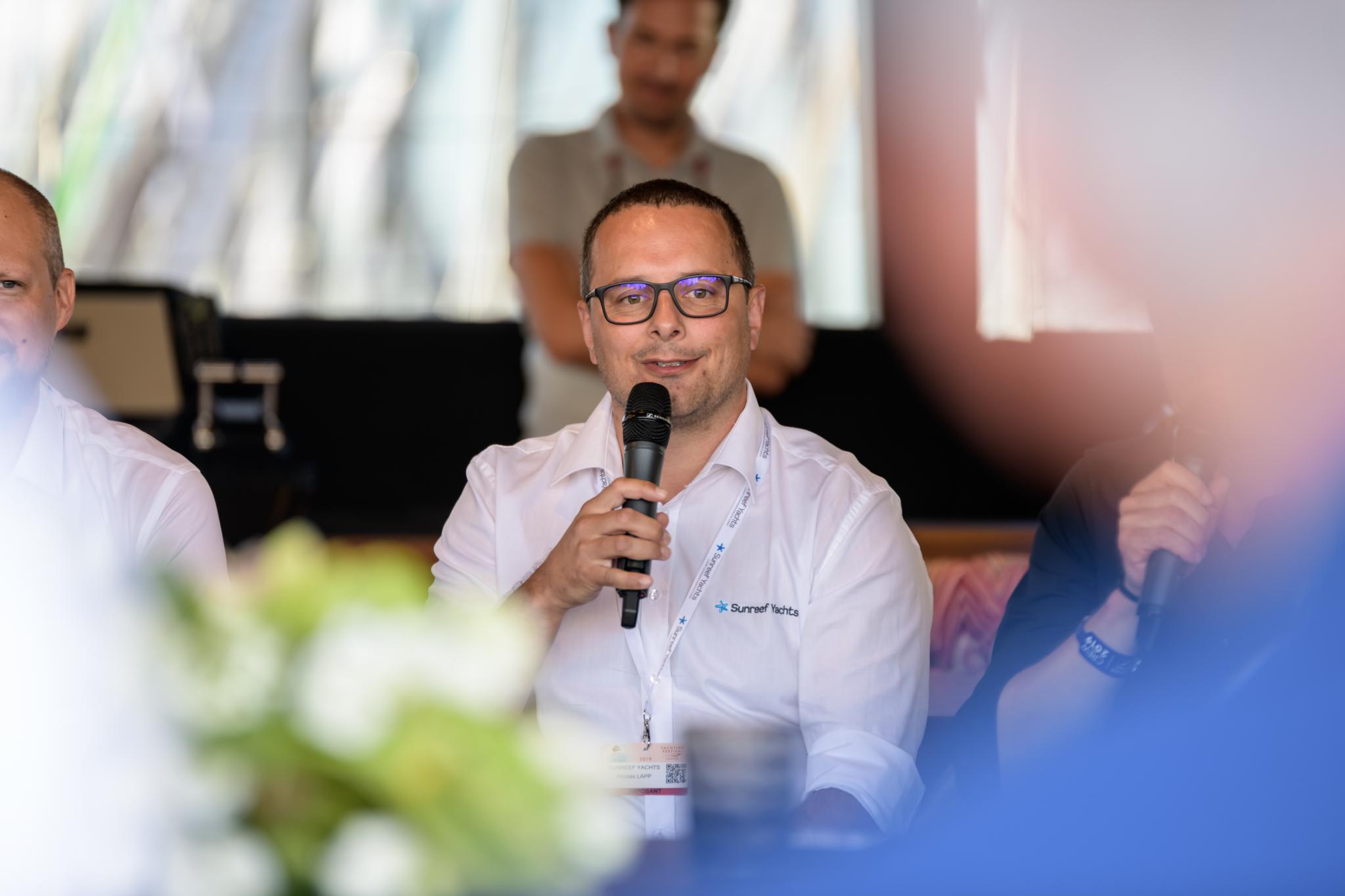 It was in Poland that Francis discovered the world of small racing catamarans and developed a new passion for sailing. He bought a large cruising catamaran and before long had a travel agency operating a fleet of charter yachts in the Indian Ocean. Clients kept asking for larger and more comfortable catamarans and, unable to find exactly what they wanted, he was inspired to build customised luxury multihulls - Sunreef Yachts was born. Francis has produced more than 100 Sunreef Yachts – both sail and motor. 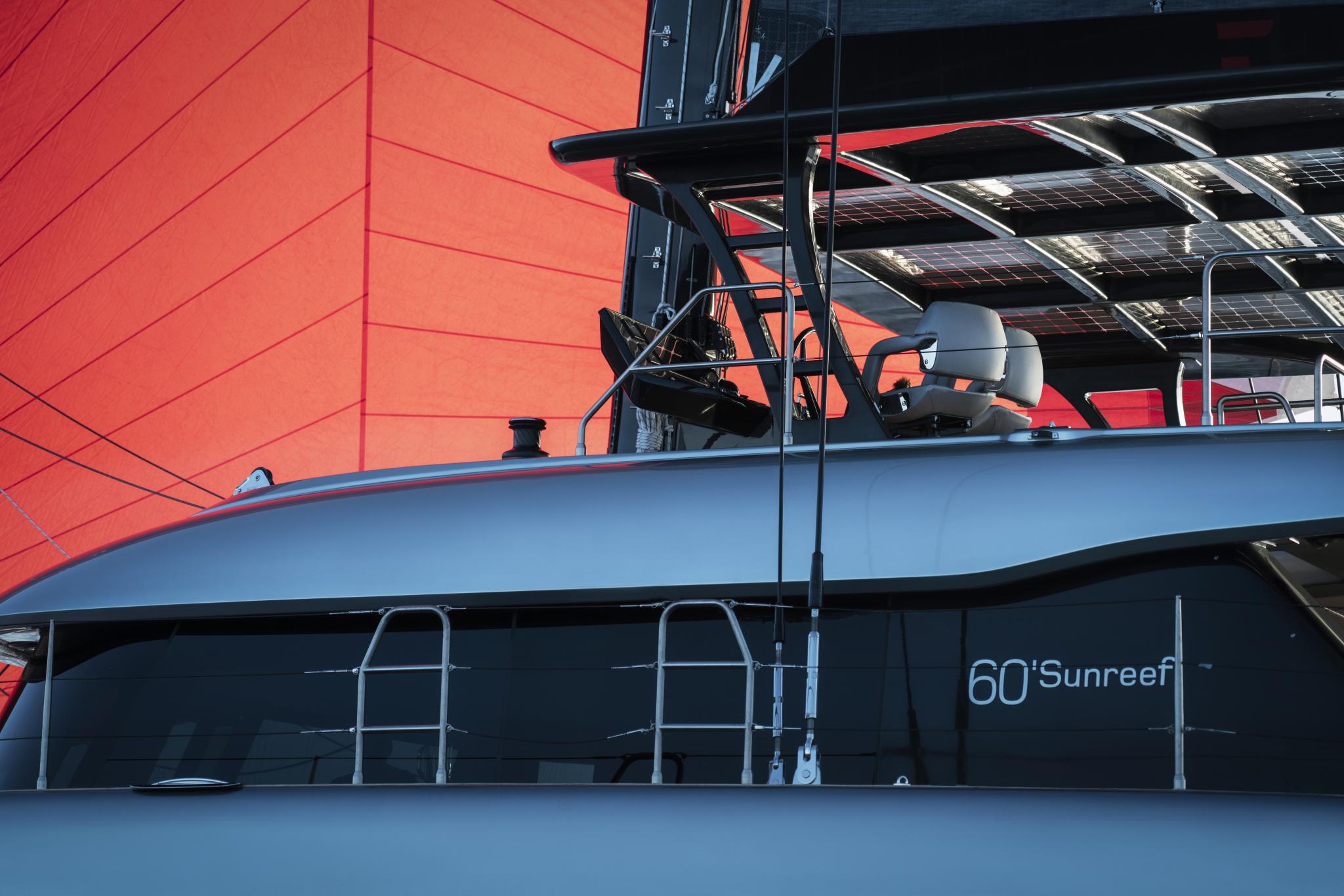 Speaking from his house in Ibiza, where he finds himself ‘quarantined’ until travel restrictions lift, charismatic Nico joined Sunreef Yachts for an online press conference to coincide with Earth Day 2020 on 22 April. During the webinar, he quizzed Francis and his son, R&D Director Nicolas Lapp, on their eco credentials. 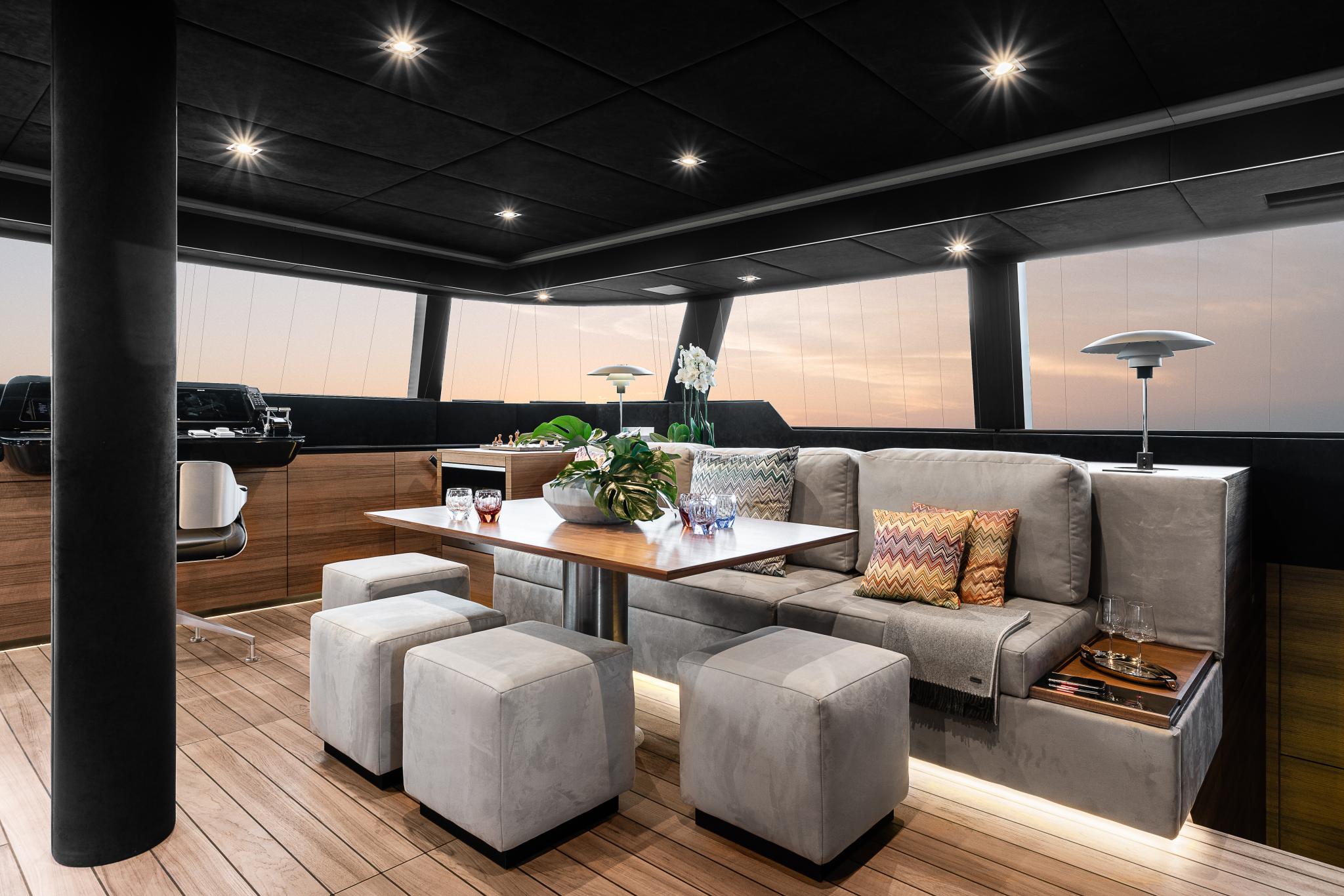 Francis explained that when he founded Sunreef back in 2002, he plumped for catamarans as they produce less drag and burn less fuel, therefore making them a more eco-friendly mode of cruising from A to B. Clients began asking the boat builder to look at ways of running the air-conditioning without the generator permanently on, so they introduced lithium batteries. And then, after more research, the first electric engines were installed about two years ago. But an eco catamaran isn’t just about the engines, it’s also about natural composites and sustainable materials, so Sunreef’s young motivated team is constantly innovating and thinking ahead. 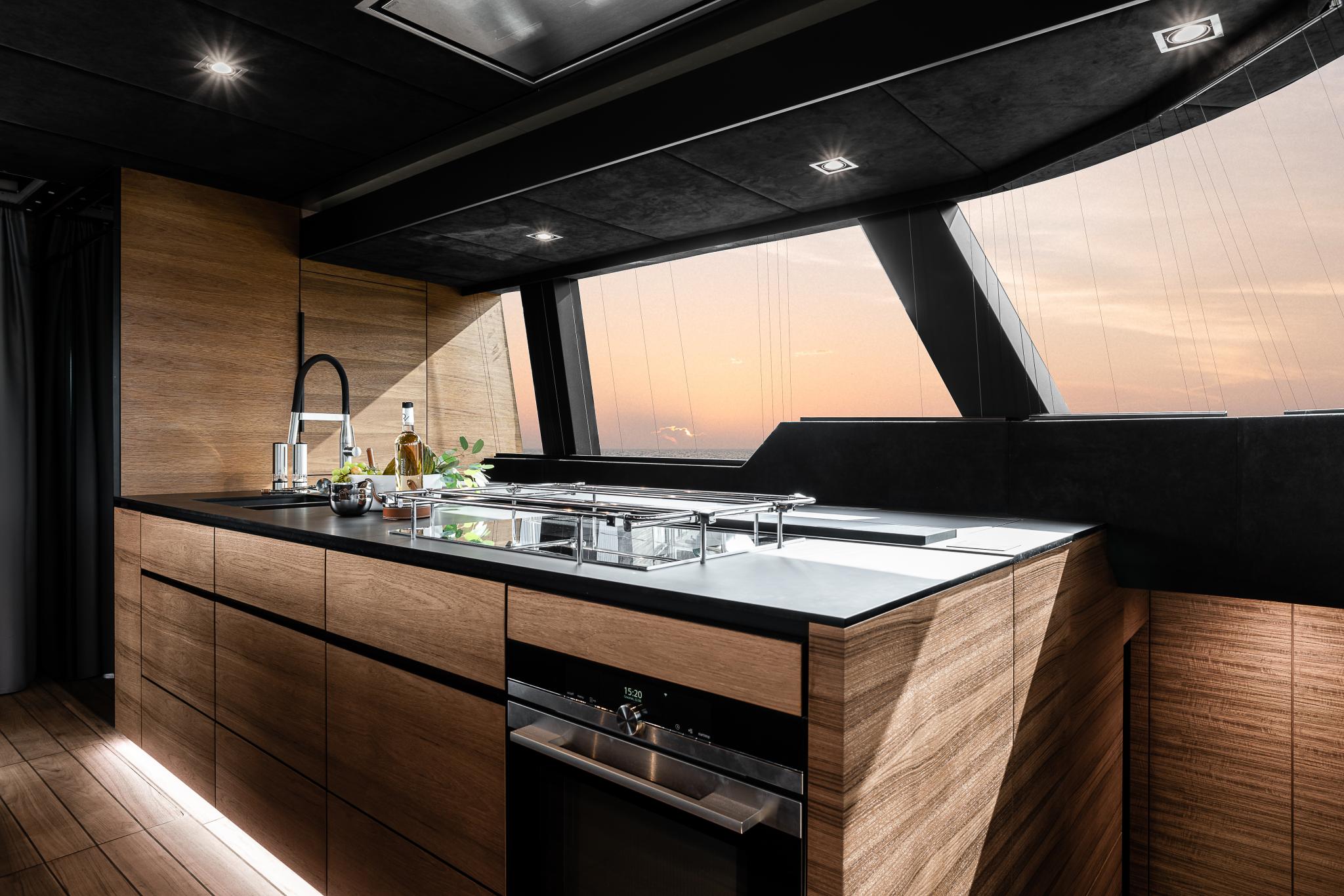 The brand has always been about quality, the luxe end of the market, and the ECO range reflects the same ethos. Many of their competitors use oversize solar panels that are not aesthetically pleasing, whereas Sunreef integrates its panels seamlessly for a more luxury feel. It wants its yachts to be beautiful, not just a big platform for solar array. Nicolas said they had developed their own solar panel, patent pending, which could be integrated completely into the hull. It offers high performance at a low weight, less than two kilograms per square metre, and, with a thickness of less than one millimetre, the panel is flexible and can be shaped in any form - unlike the thick flat panels seen on other solar yachts. The panel is also strong enough to be walked upon, so can be placed in endless positions throughout the yacht. 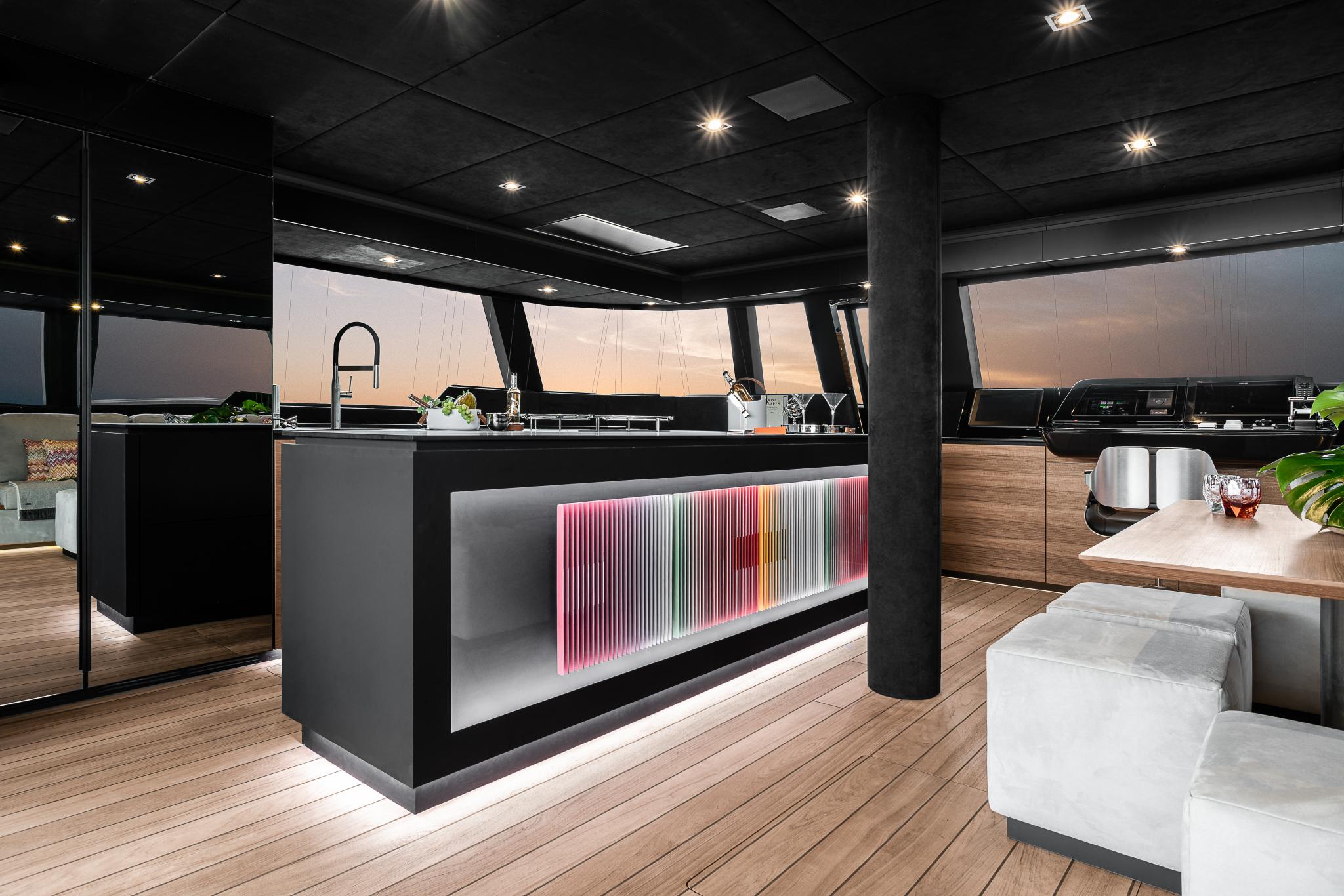 The first yacht featuring these panels is already under construction, the 80 Sunreef Power (as chosen by tennis champ Rafa Nadal to replace his Monte Carlo Yachts MCY 76 Beethoven). This long-range multihull has a maximum of 200 square metres of solar panels weighing 360 kilograms and generating 40 kilowatts of power per hour. If you compare this to using generator power, it would be normal to have two 20 kilowatt generators with each one weighing 400 kilograms. You can do the maths, the solar setup offers roughly double the power for half the weight. And, with most Sunreef owners using their yachts in warm climates, up to 12 hours of sun a day, you can imagine the energy they can harness and store. 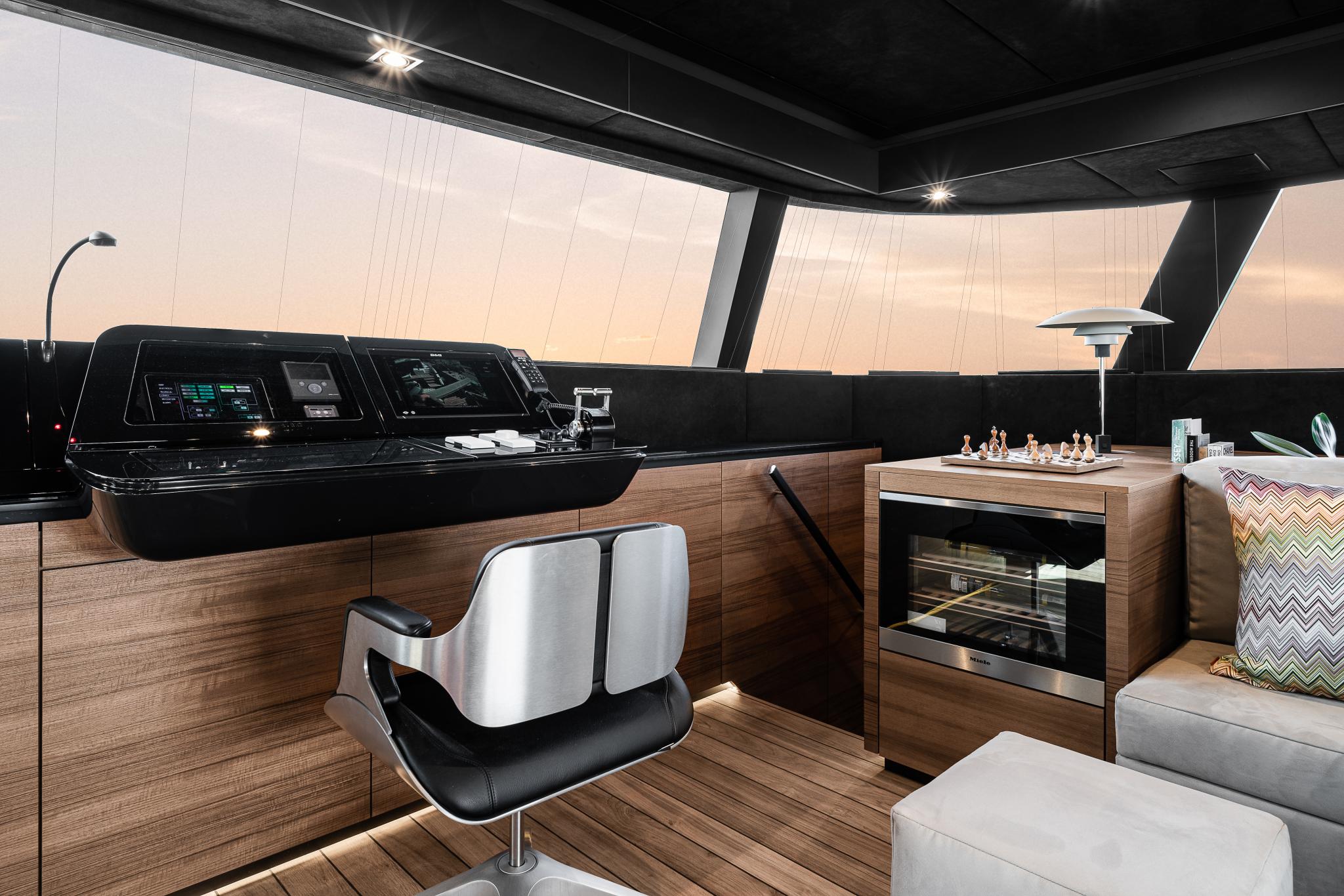 Speaking of storage, a vital consideration for producing energy at night and during cloud cover, Sunreef has worked closely with a dedicated supplier to produce bespoke ultra-lightweight batteries that can last for around 5,000 discharge-charge cycles, which should give ten years of usage before having to replace. 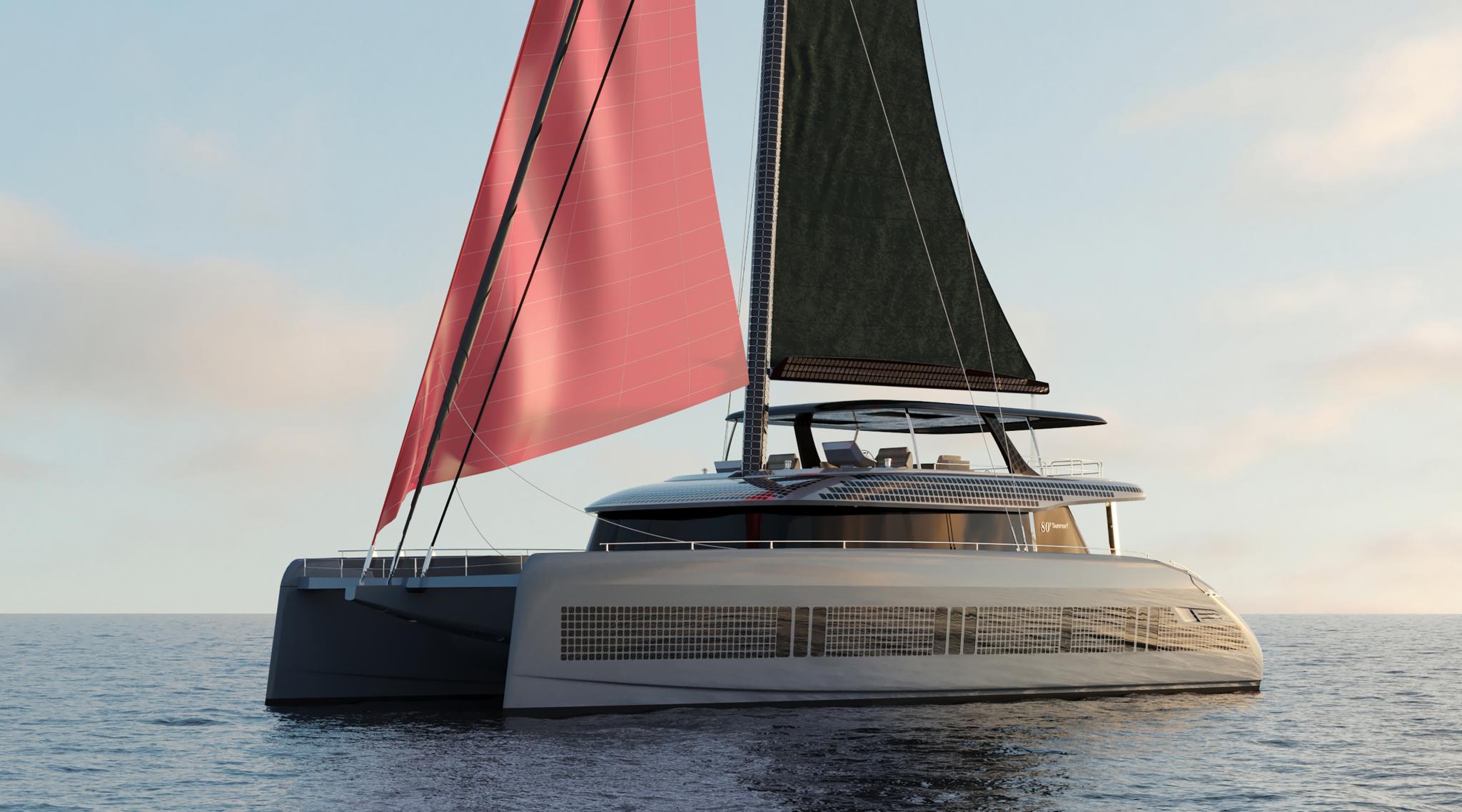 The Sunreef team concluded the virtual conference by talking with Nico about other aspects of sustainable boating, in particular the materials used both on the interior and exterior. They discussed the benefits of natural basalt and linen/flax fibre, which has similar characteristics to glass fibre but with better eco credentials, especially in combination with an eco resin. The Directors also spoke of using less animal leather, more recycled fabrics, and the varied options for decks, ranging from 100% recycled synthetic solutions to reclaimed teak, or even cork. Compressed paper was another idea for countertops - and easily implemented.

Sunreef reminded us that all of their yachts had a high level of customisation and many clients actually preferred the ‘less is more’ minimalist style, which marries perfectly with more responsibly-sourced materials.

Sunreef Yachts now has an entire website dedicated to its ECO range - www.sunreef-yachts-eco.com. Wonder if young Nico will follow in fellow world champion Rafa’s footsteps and order one of the award-winning green cruising machines for himself?