The Show Must Go On

The UP40 Crossover. | Antonini Navi

The global pandemic has certainly put pressure on the superyacht industry. Crew and boats have been displaced across the world, many high-profile yachts have already gone on the market, Monaco Yacht Show 2020 has been cancelled, and most shipyards had to close during the peak, creating refit bottlenecks. The wealthy have not had it easy. Yet, in the face of all this adversity, the yacht manufacturers themselves remain buoyant and continue to release new models suited only to the exceedingly deep-pocketed. 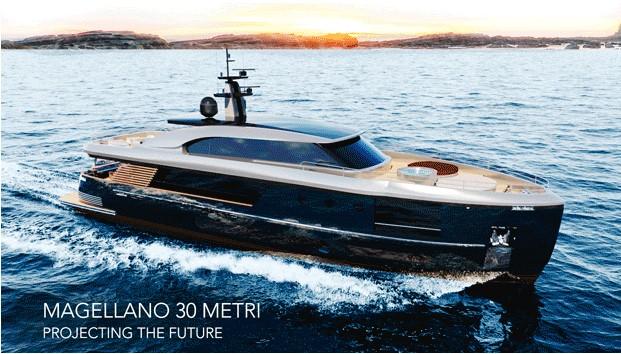 The Magellano range is inspired by Ferdinand Magellan, a celebrated Portuguese explorer credited with conducting the world’s first circumnavigation. It’s for those who savour the thrill of long exhilarating voyages and discovering far-flung destinations. A contemporary take on the traditional trawler, each Magellano has a no-nonsense near-naval appearance which shuns sporty trends therefore remaining effortlessly timeless.

Previously topping out at 25 metres, there’s a new flagship on the horizon - the Magellano 30 METRI. UK-based Ken Freivokh provides the exterior design inspiration, a man with the likes of Maltese Falcon and Black Pearl on his CV, while Italian Vincenzo De Cotiis is responsible for the interiors.

Fitting for this era, the yacht is equipped with a BCOOL system which ensures constant air circulation and sanitisation. Based on NASA-developed technology, it eliminates harmful microorganisms from the ventilation shafts and environment while also regulating air temperature and humidity levels for maximum comfort.
www.azimutyachts.com 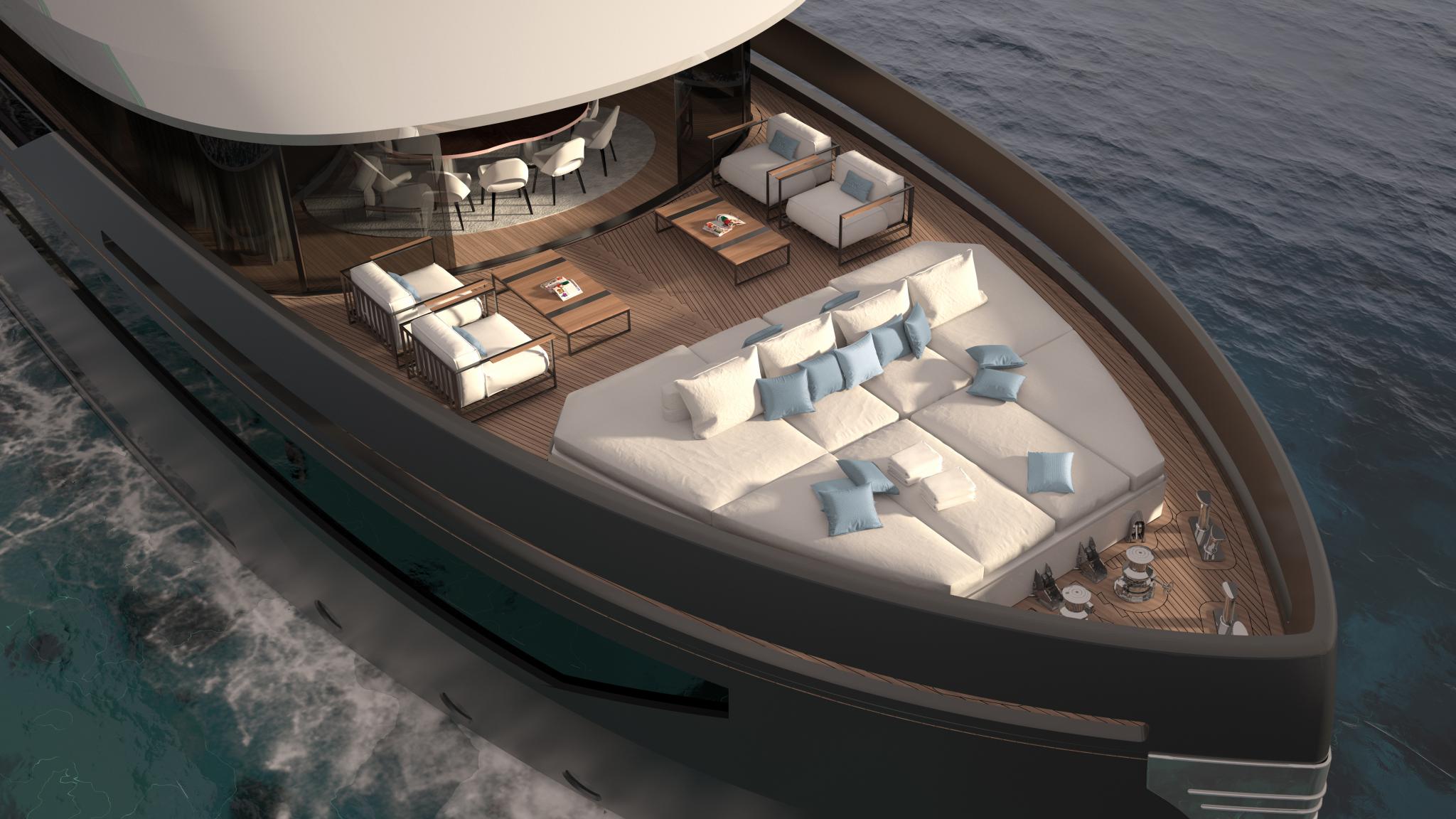 Although the B.YOND 37M isn’t quite as large as your usual Benetti, it pledges to pack the volume of a 50 metre megayacht in just 37 metres. An expedition yacht at heart, B.YOND 37m is arranged across four decks - lower deck for captain and crew, main deck for owner and guest cabins, upper decks for daytime use - with two separate connecting staircases. There is a full-beam owner’s suite in the bow, alongside four guest suites, each with sea views and kitted out like a luxury boutique hotel. Three of these suites can be fitted with a private terrace as an option. There’s space for water toys, two tenders, a gymnasium, a beach area with sauna, and oversized fuel and water tanks enabling extended cruising range. 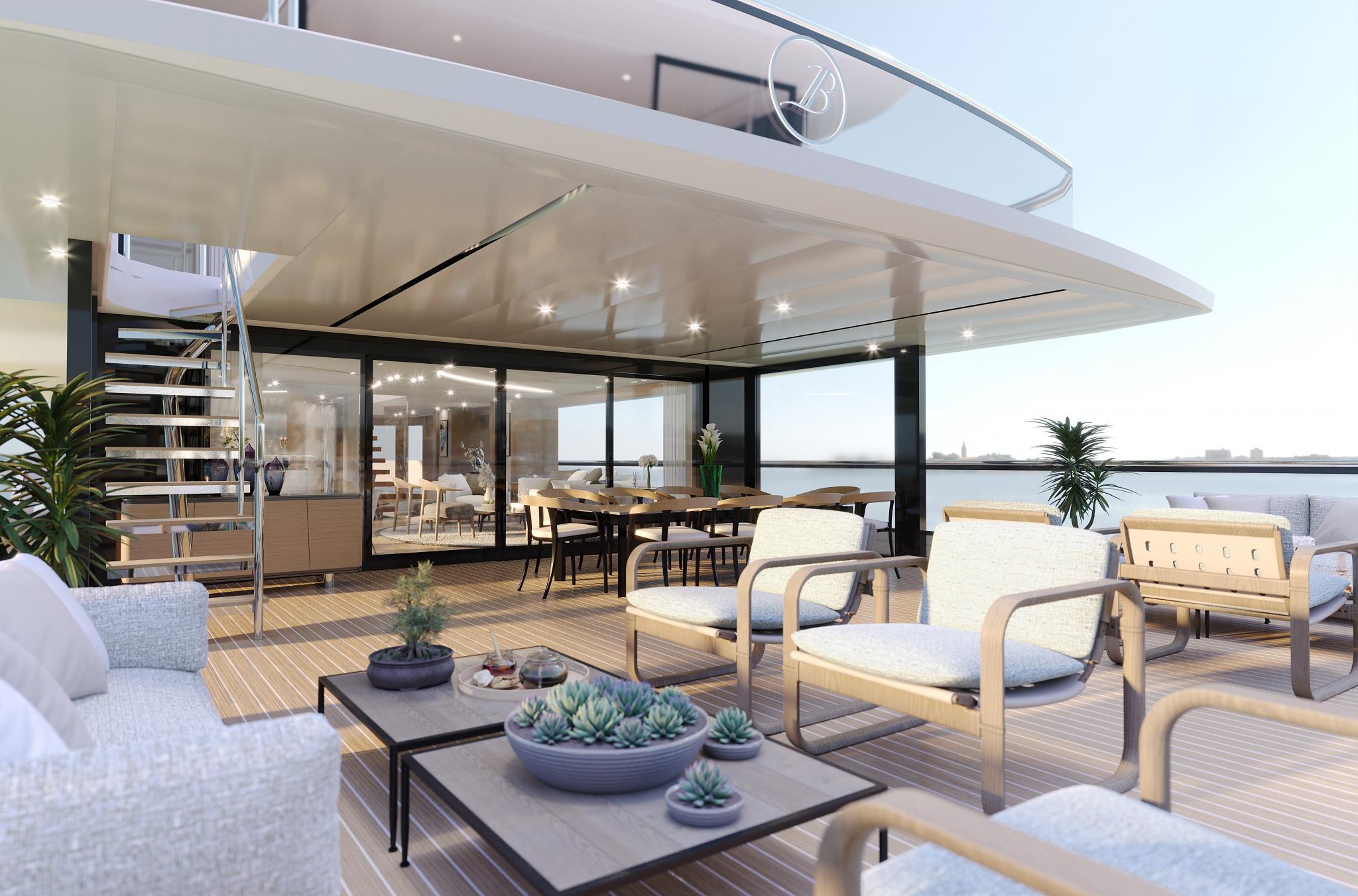 Long comfortable cruises aside, the B.YOND 37m is also created with a reduced environmental impact in mind. In the 1990s, Benetti was the first shipyard to use fibreglass for yachts over 30 metres, today it’s the first major player to return to steel. Fibreglass tends to go to landfill at end-of-life, metal can be recycled and repurposed. The final piece of the eco jigsaw is a diesel-electric propulsion system developed by Siemens especially for the Azimut Benetti shipyard. The SISHIP EcoProp system allows for four different configurations: Enhanced Comfort ideal for zero-emission night and coastal cruising, Eco Cruise/Hotel Mode for zero emissions while cruising or at anchor, Extended Range for reduced consumption on very long trips, and Eco Transfer where one engine drives both shafts to reduce engine hours.
www.benettiyachts.it

In April this year, Italian shipyard Gruppo Antonini launched its new luxury custom yacht brand, Antonini Navi. With an initial investment of over 10 million euros, it would also be drawing on the extensive knowledge, heritage and support of the Antonini family. The first Antonini Navi project is the UP40. 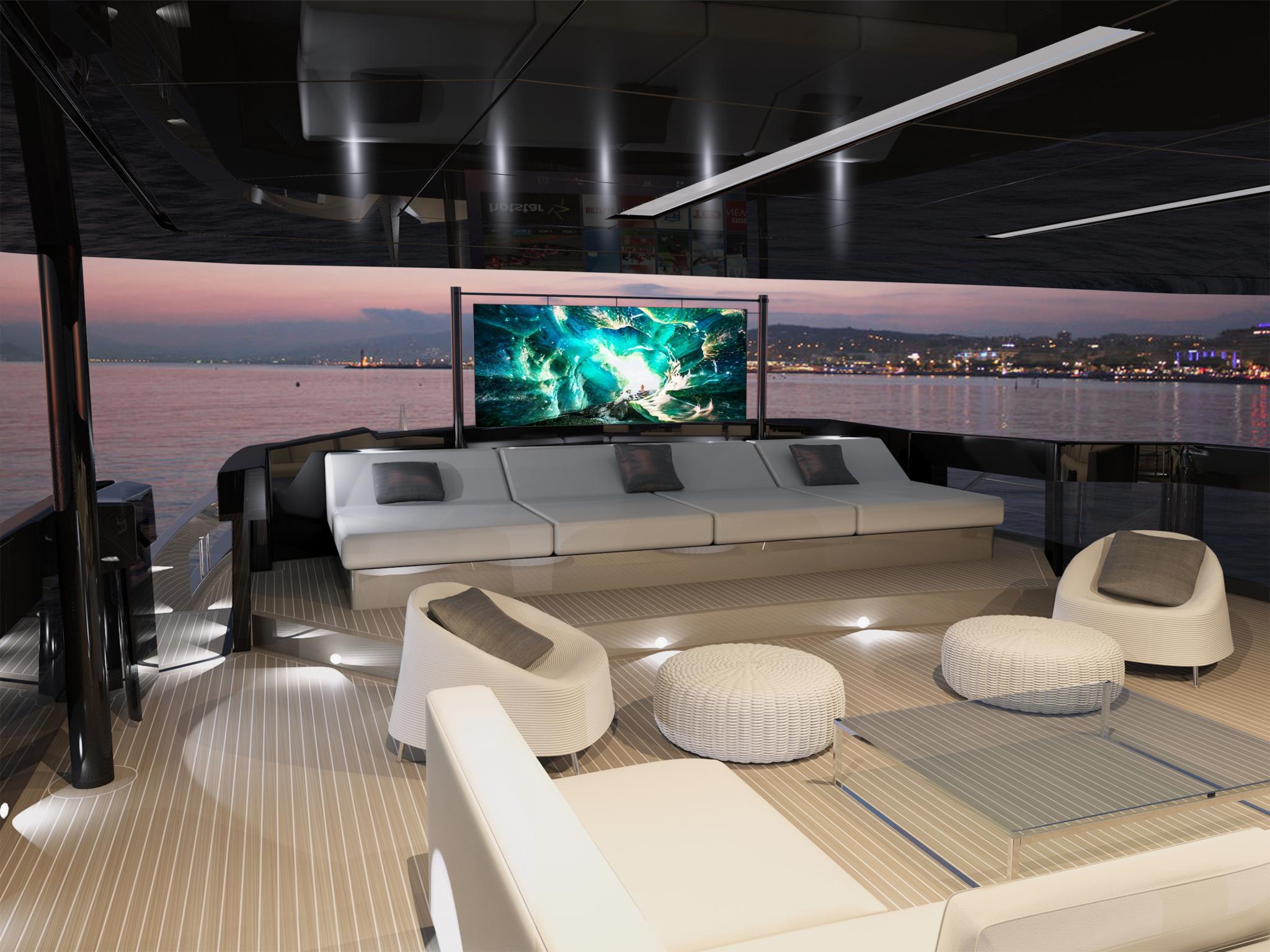 No, not a reggae band from Birmingham, UP40 stands for Utility Platform 40 metres and is, in its purest sense, a modular hull project that can be adapted to build three different types of displacement yacht - Motoryacht, Sport Explorer or Crossover – depending on the customer’s need. 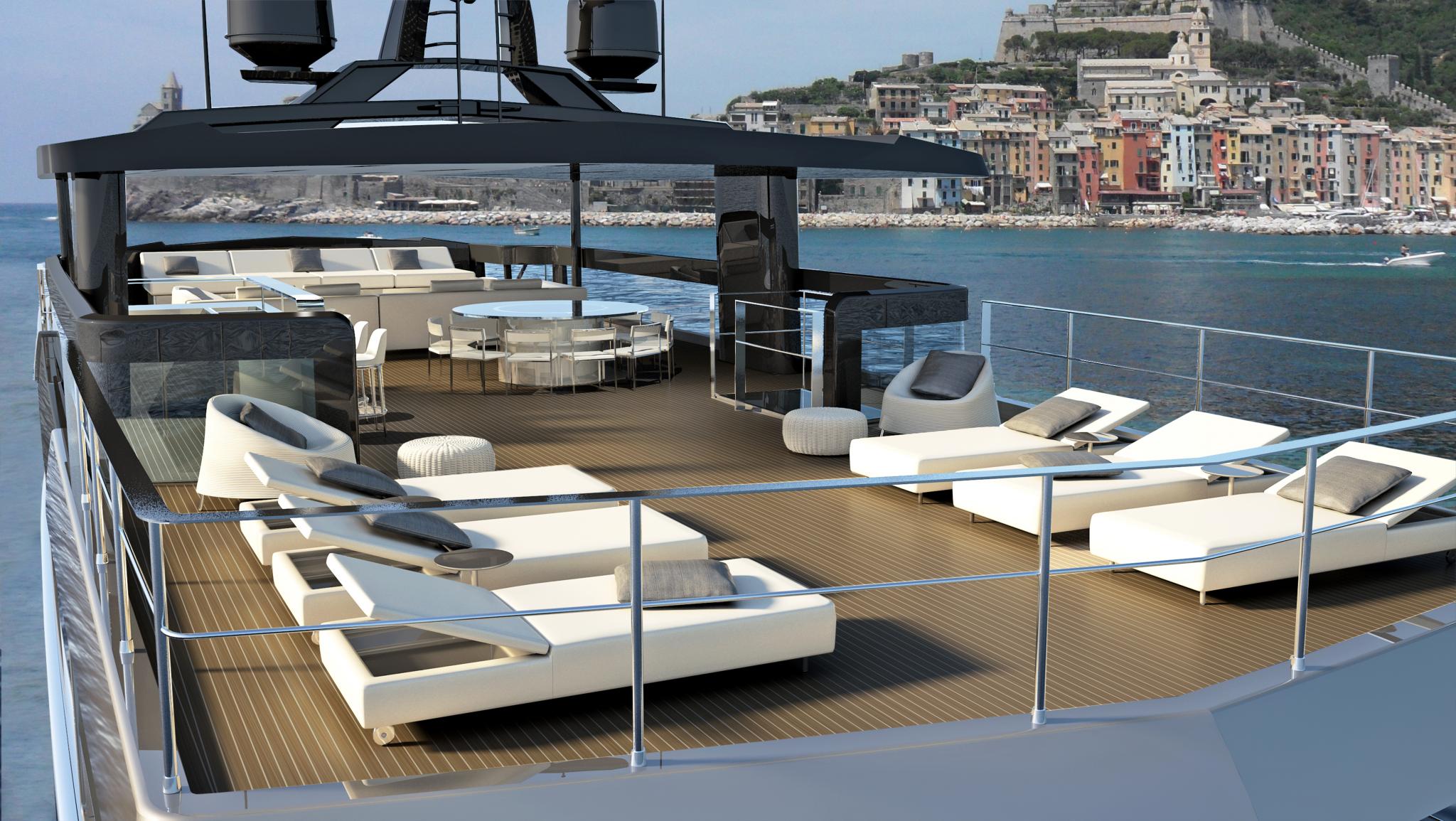 From the drawing board of internationally celebrated yacht architect Fulvio De Simoni, this back-to-basics solution, for which engineering work has already been completed, ensures fast delivery times and a generous amount of customisation on the part of the client.

Partner, Sales Director, and childhood friend of the Antonini brothers, Aldo Manna, said: “For Antonini Navi’s first project we decided to apply a construction method to steel superyachts previously used mainly for smaller fibreglass boats: we created a modular platform designed down to the tiniest detail, enabling us to start building the hull and choose the type and concept at a later stage, even half way through the construction process. This means that owners can personalise their superyacht when construction is already underway, and not only the interiors but also, and most importantly, the functional type. The result? Maximum flexibility of choice but shorter delivery times, because the hull design and construction have already been completed.”

The shipyard will start building the first UP40 Crossover in September.
www.antonininavi.com 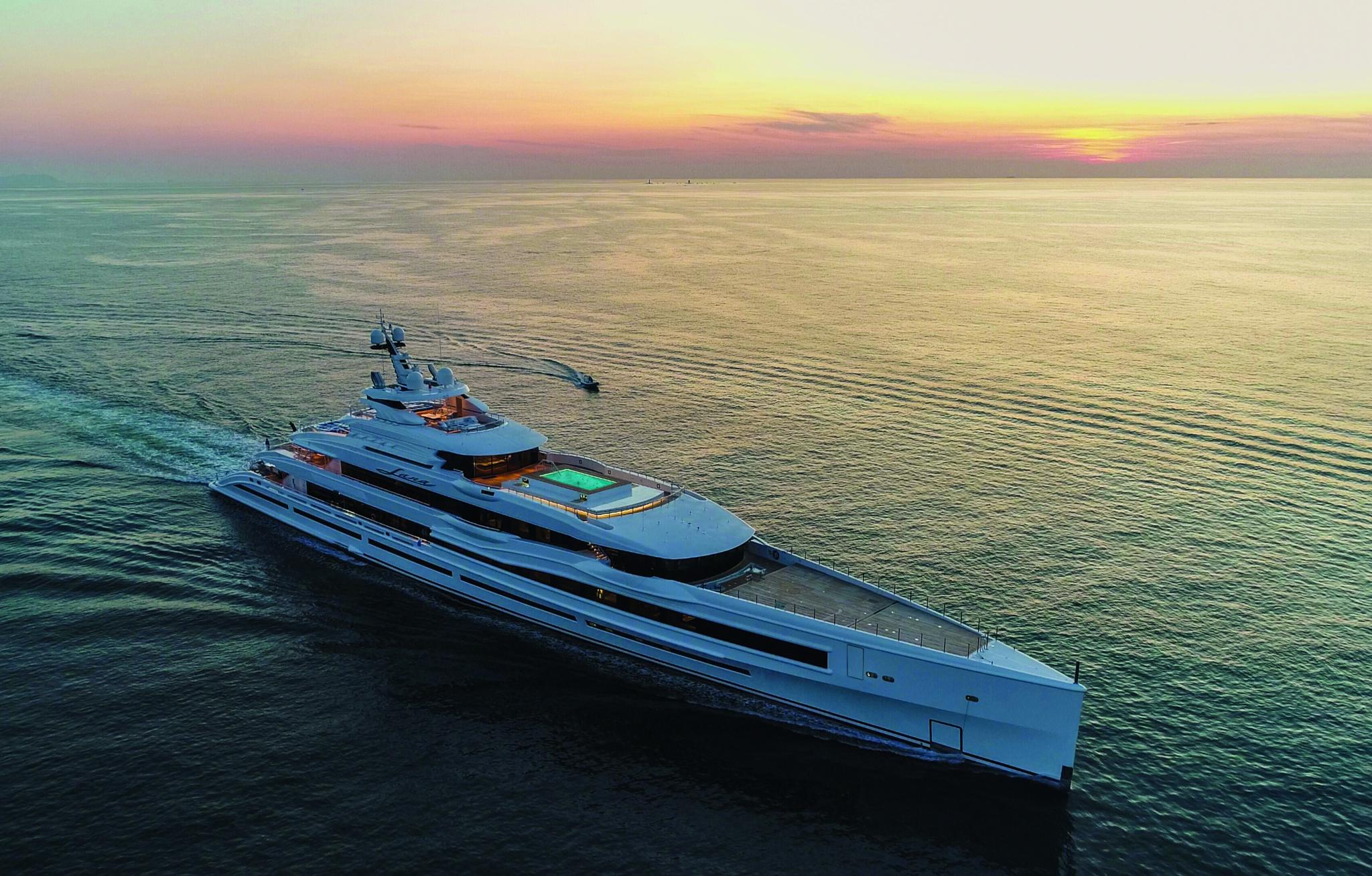 Last, and largest, back to Benetti and 107 metre ‘Giga’ yacht FB277 M/Y LANA. Officially delivered on 18 June, this is the third 100-metre-plus yacht to be released in as many months from Benetti’s growing Giga family. Following in the footsteps of FB272 (M/Y Luminosity) and FB275 (M/Y IJE), M/Y LANA is an all in-house affair with exterior and interior styling by its own team.

Her stand-out features include diesel-electric propulsion, a large swimming pool, touch-and-go helipad, a grand piano, Spa with hammam and gym, and plenty of toys and tenders. She can accommodate 12 guests across eight cabins, plus a crew of 34 to tend to every need.

Benetti’s President, Paolo Vitelli said: “We are proud to have delivered another Giga yacht in our Giga season. LANA is an example of excellence: outstanding quality, unique style, and an icon of Made in Italy. A particular thanks to the Owner who trusted Benetti for this creation. We are happy to have met all his expectations.”
www.benettiyachts.it

chris | about 1 year ago

The corona- and mask-terror destroys the economy for the little people, but, hey, the millionairs can still have fun with their yachts. I don't criticise the millionaires or yacht-builders, but the government, for destroying the lives of millions of people.