Regular visitors to Majorca will already feel like they know Benita Blue. The 33 metre spent several years moored on Palma’s Paseo Marítimo, directly in front of Tito’s nightclub, and was an instant head-turner due to her iconic blue hull splashed with a streak of russet. She may have moved to Port Adriano, and lost her russet accent colour in a comprehensive paint job, but Benita Blue remains as iconic as ever and is now for charter - and for sale. 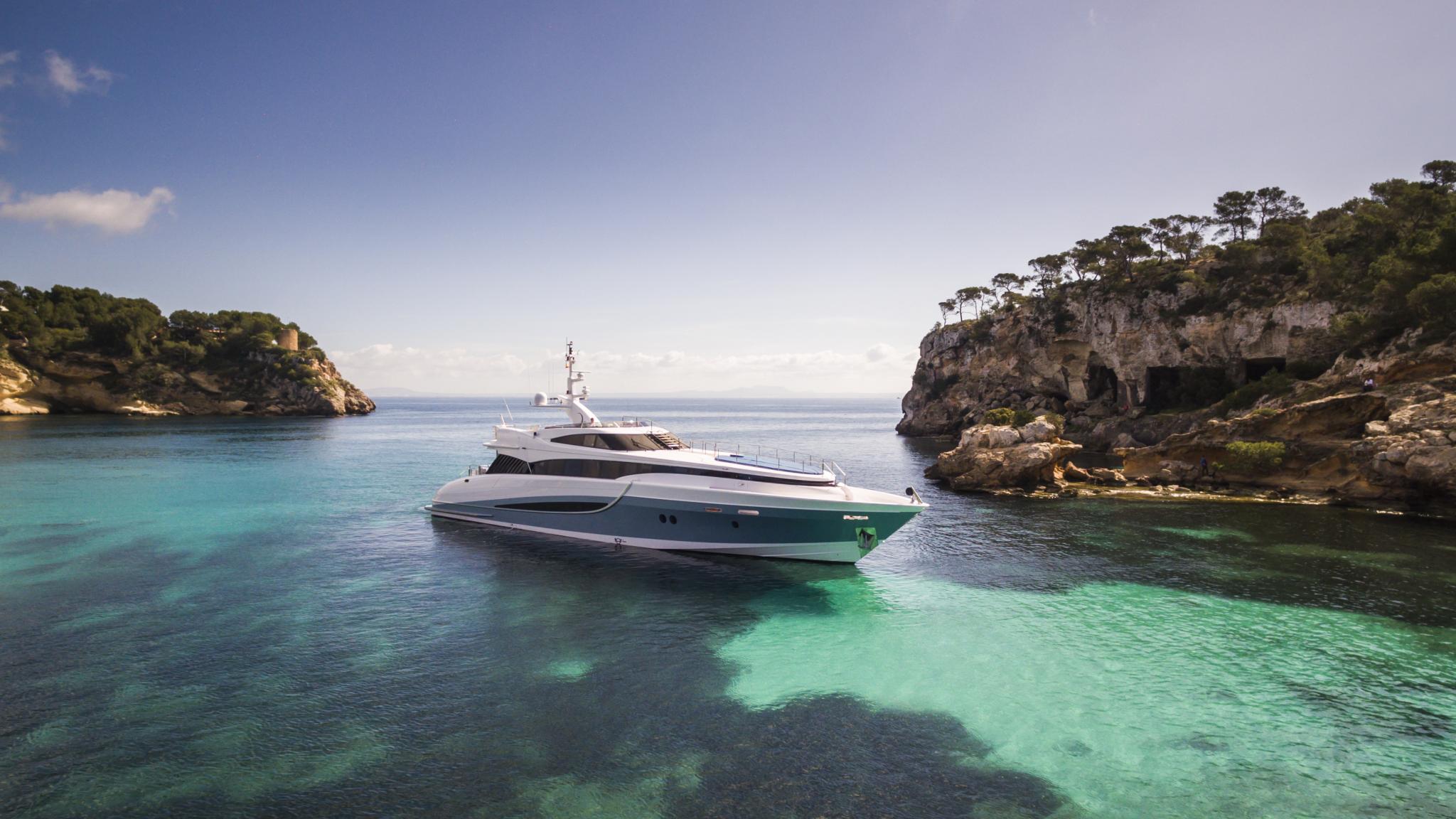 Captain Nigel Seabright has been at the helm of Benita Blue since 2014. Once an electrician by trade, Nigel’s early days of sailing centred on the European and Caribbean racing circuits. Between events, he completed his Yachtmaster Ocean and gradually stepped away from the competitive scene to embark on an impressive captain career. Nigel’s covered over 130,000 nautical miles, including eight Atlantic crossings and one Pacific, and Benita Blue is, believe it or not, his first motorboat.

Nigel explains: “Year one was busy. Having been built by Evolution Yachts in Australia in 2005, my first task was to get her through a ten-year survey before applying for a Balearic charter licence - both were achieved without a hitch. In 2017, we refreshed Benita Blue’s exterior look and last year, in 2019, we improved her charter appeal by injecting maximum flexibility into her cabin arrangements. The two en-suite doubles are now separated by a retractable wall allowing for conversion to a vast master suite, with one of the doubles becoming a sofa. Meanwhile, the two en-suite twins have been reconfigured such that the beds slide smoothly into doubles, if required. Each twin has an additional Pullman berth to bring Benita Blue’s guest capacity to ten - although I’d say six to eight guests gives the ultimate in space and comfort. 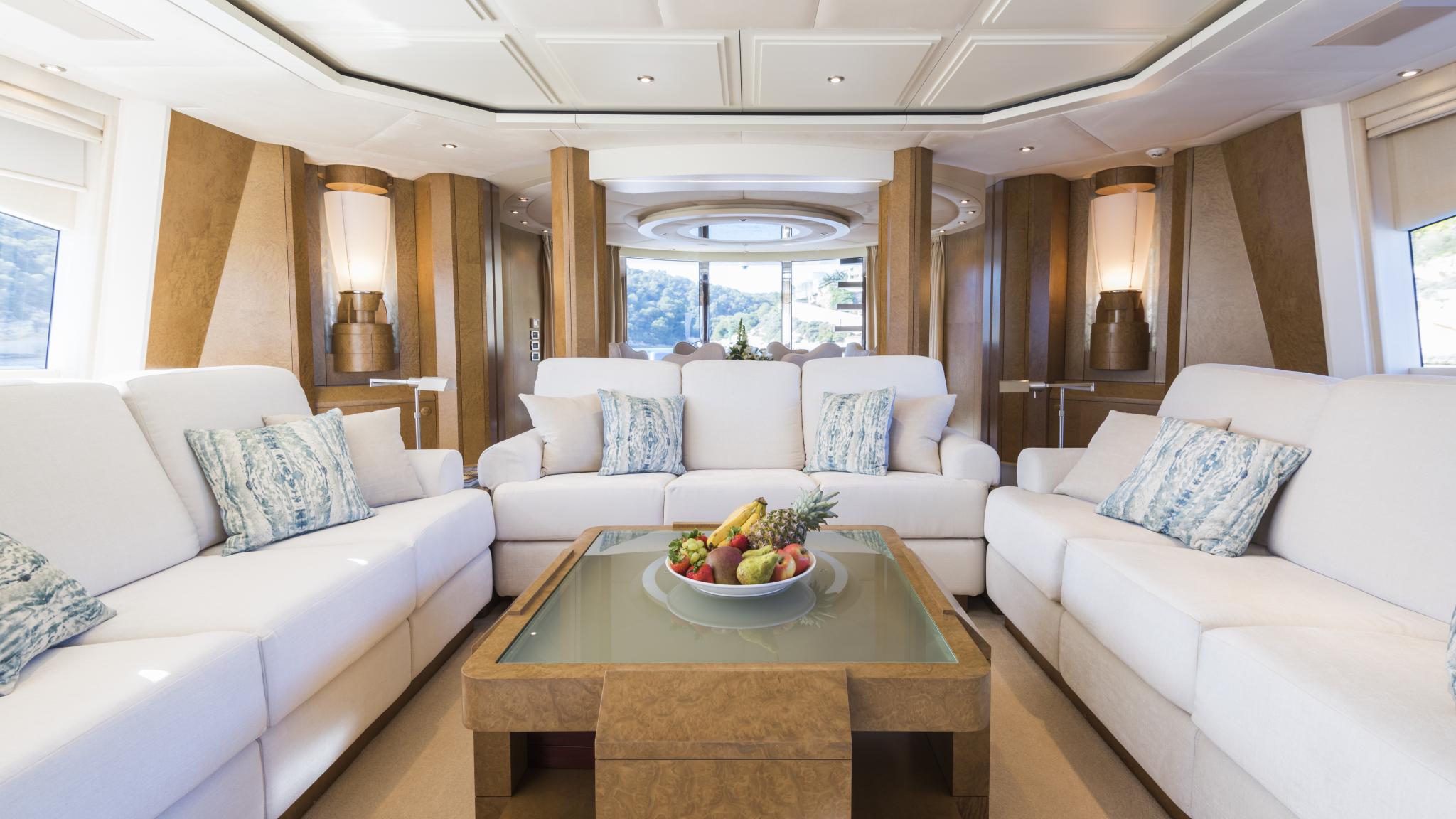 “In terms of charter appeal, Benita Blue is a good stable seaworthy boat,” adds Nigel. “She’s solid at anchor due to her being 40 to 45 tonnes heavier than a mass-produced plastic-fantastic competitor. We charter at 8,000 euros a day to avoid the rowdier customer and are able to be rather selective as we don’t need back-to-back charters. Six weeks’ charter per year pretty much covers Benita Blue’s running costs - big refit and maintenance aside. 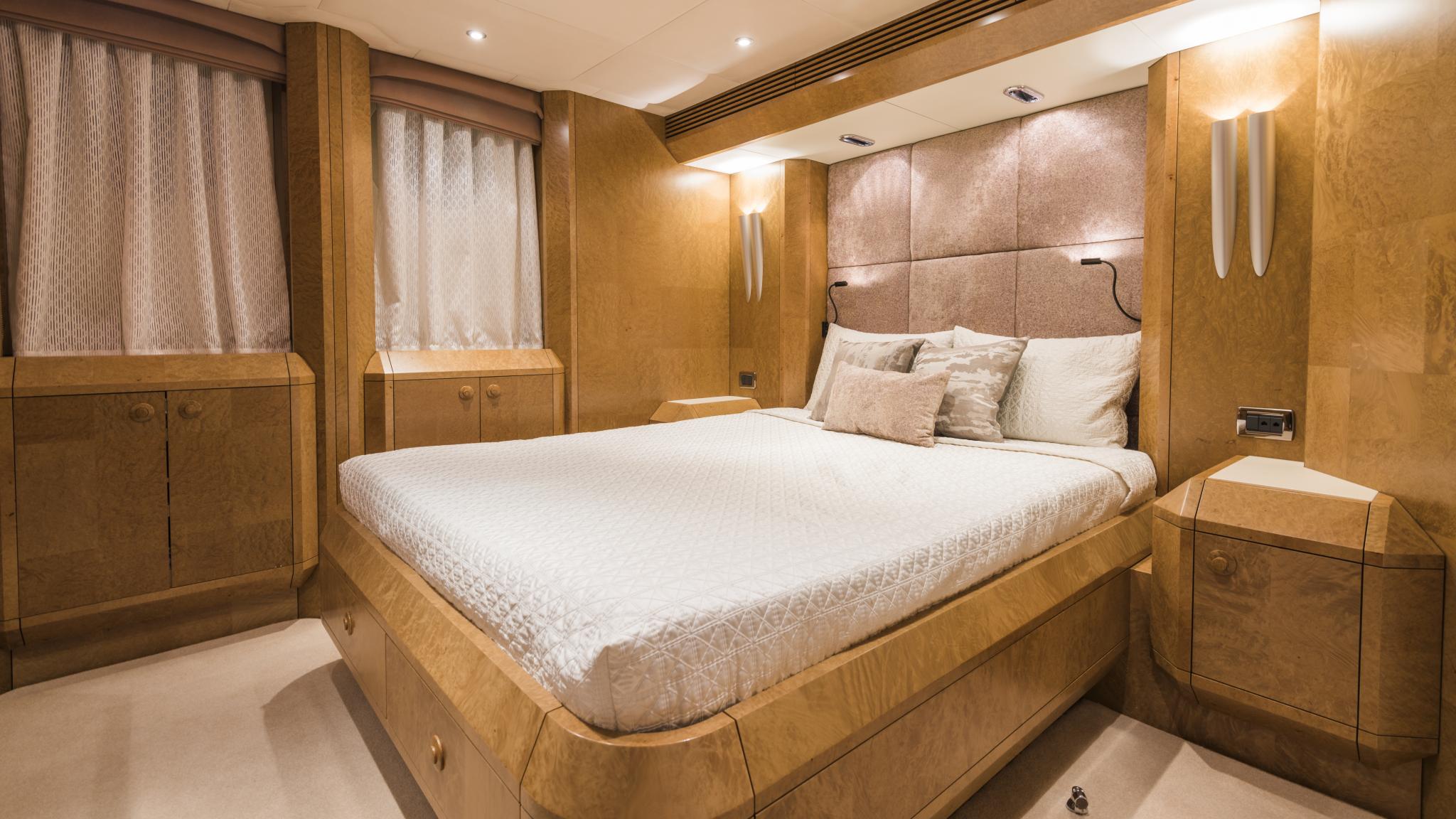 “The charter market has been undeniably tricky over recent years. Greece, Croatia and the South of France have all made themselves more attractive to visiting superyachts, while the Balearics seem to have done the opposite by hiking berthing costs and implementing no-anchor zones to protect the posidonia sea grass. We might pay 800 euros a night in a Greek marina, but fork out 2,000 euros for the same berth in Ibiza - you see the problem. And, while I used to spend my days worrying whether the food, service or atmosphere was spot on, I am now preoccupied with where I’ll put the blasted anchor. As for 2020, well, you know the story. Ironically, we had more enquiries this year than in the last three, but it’s been hard to sign contracts with various restrictions on travel - not least British quarantine. We are, however, fully booked in August.” 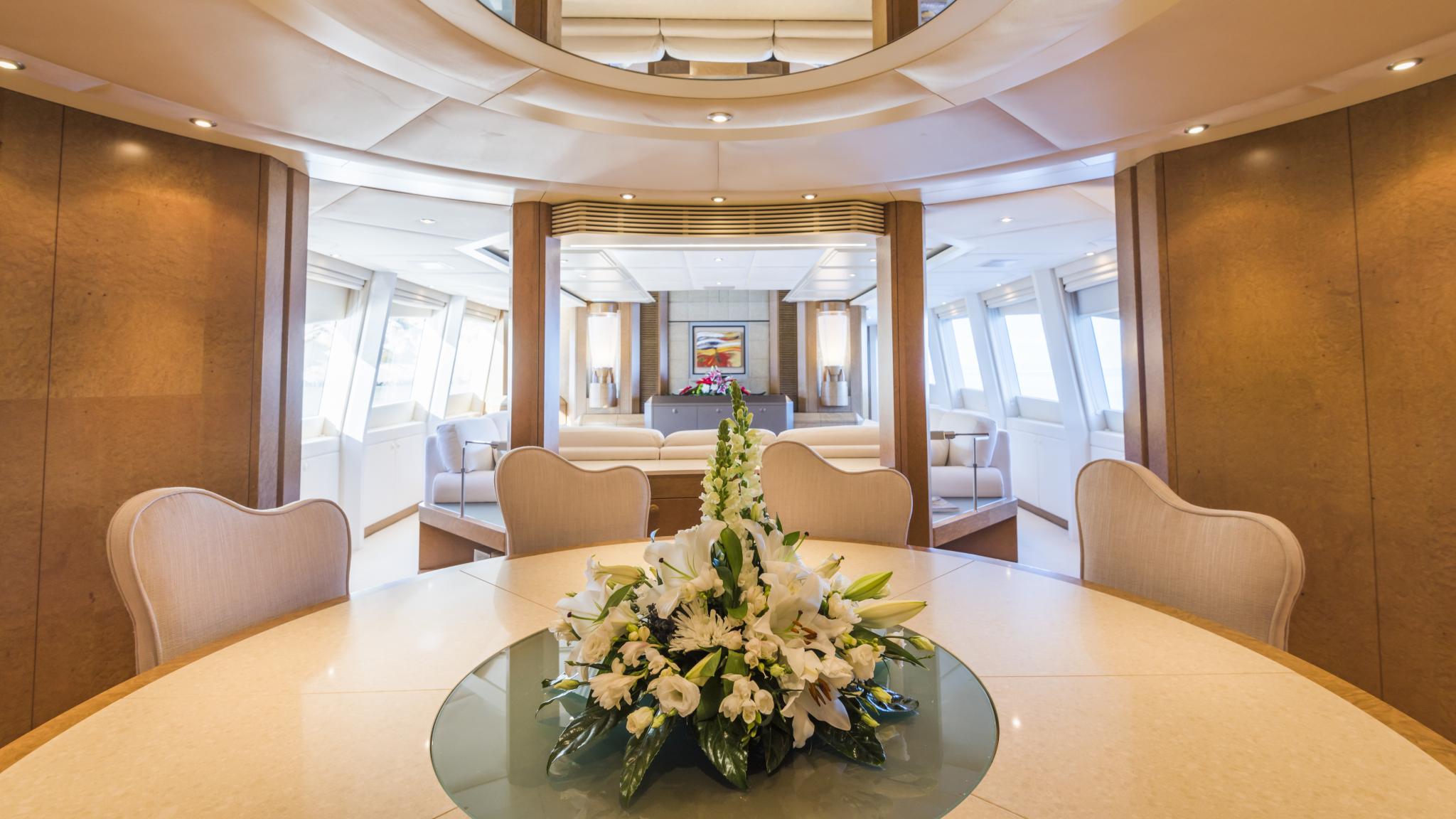 Yacht Broker Stuart Bray from Bray Marine International has known Benita Blue, and her British owner, for the best part of 15 years. He even had a hand in the design of that aforementioned paint job. Needless to say, Stuart has a lot of affection for the yacht and is keen to see her sold to the right new owner. 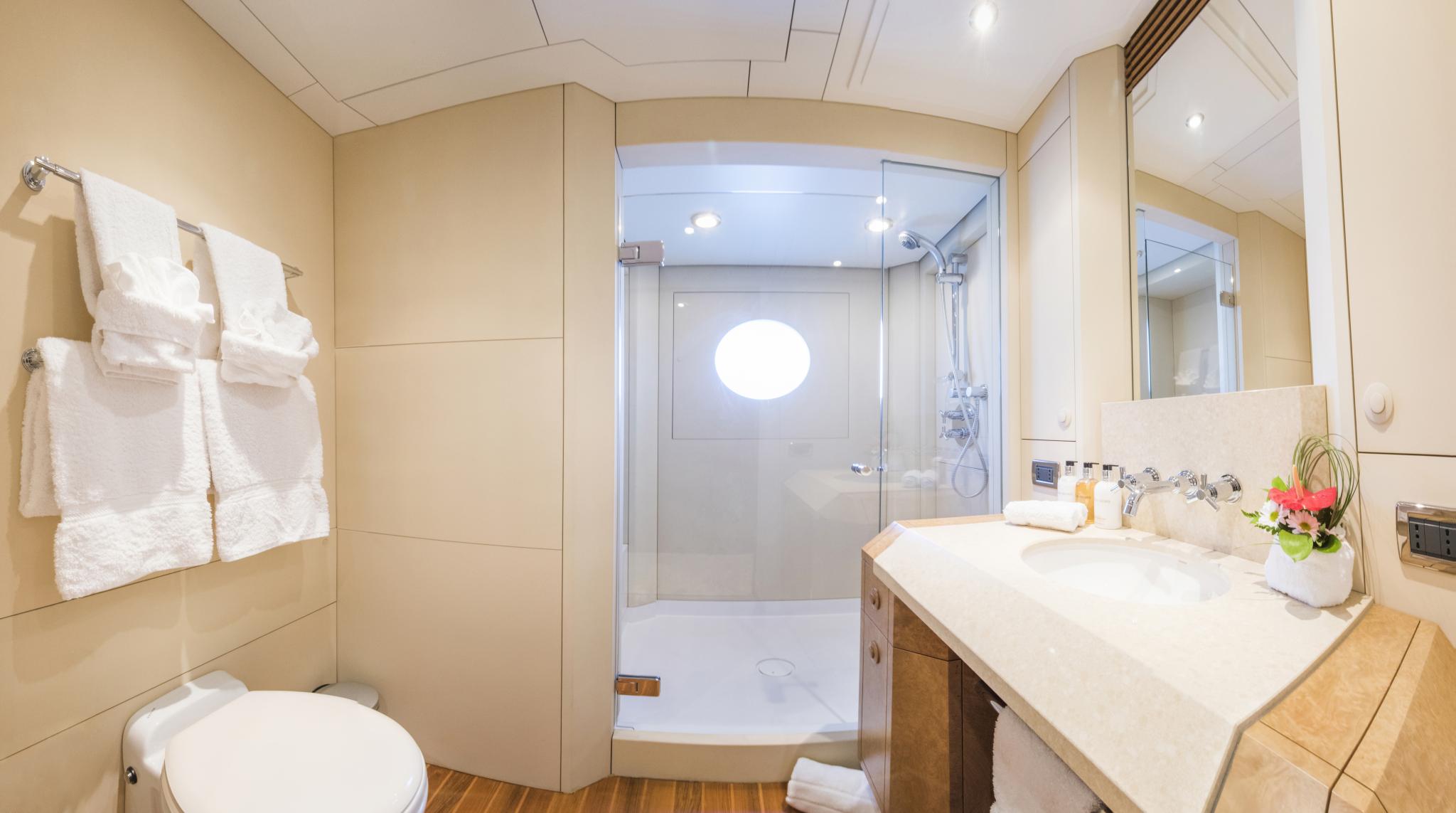 Stuart says: “Benita Blue is a clean safe buy. She’s had one owner since new, is crewed year-round to a commercial standard, in DNV GL Class, MCA compliant, with a Balearic charter licence, and all relevant taxes are paid. Well-known in the Islands, she’s the perfect size to enter most bays and marinas, and can be crewed by a team of five - including chef and captain. On the subject of crew, Nigel highlighted guest comfort, but crew comfort is not an afterthought on Benita Blue. There are two en-suite bunk-bed twins and a further en-suite double for the captain - unheard of on a 33 metre - and she has a proper walk-in fridge, separate pantry, and utility room with duplicate appliances - two washing machines, two tumble driers - which is also highly unusual for this size of superyacht.

“Benita Blue is a genuine one-off,” continues Stuart. “When she was built, the shipyard smashed up the hull moulding so there could never be another. And, unlike ‘cheaper’ builds, she won’t fall to pieces in a few years. She’s as solid now as she was 15 years ago. Her interior, created under the style direction of Sorgiovanni Designs, draws from a palette of creams, blues and natural wood, and offers scope for modernisation to suit tastes. On deck, she has a Jacuzzi, several al-fresco dining options, and space for endless water toys. Benita Blue’s speed is not compromised for her beauty and she has a cruising speed of 22 knots.

“In a similar vein to many superyachts, Benita Blue has been tentatively for sale for a number of years, with the owner keeping an eye out for a replacement. Her price has gradually dropped to 3.25 million euros and she is worth every cent all day long. Having been involved in Benita Blue’s story for so long, I will personally be sad to see her leave our waters, so let’s hope her new owners decide that Majorca suits them just fine.”
Benita Blue is available for charter with www.burgessyachts.com and for sale with www.braymarineinternational.com.