It is one of Majorca’s most popular dishes and it is frequently on the table when islanders celebrate a baptism, first communion, wedding or just a weekend family get-together. Most Majorcan restaurants have it on the menu and many foreign residents have eaten it in Génova, Inca, Algaida and other inland towns and villages.

The above description could fit several well-known Majorcan specialities, but the one I am referring to is arròs brut, one of the island’s most iconic rustic dishes.

This dish was in the news last week when the ONCE announced it has dedicated one of this week’s lottery tickets to it. The draw will be this Saturday and tickets, which cost €2 each, are now on sale all over the country. Traditional dishes from other parts of Spain are featured on other days. 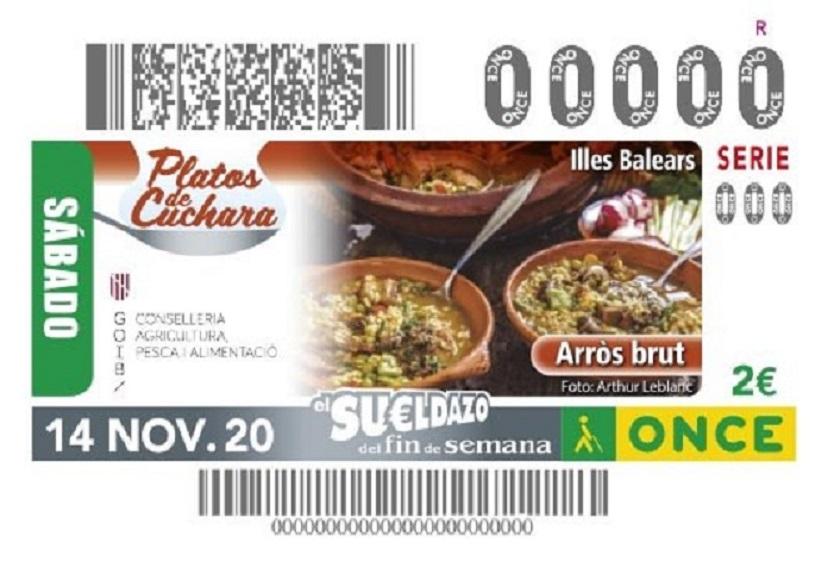 The ONCE is the national organisation that looks after the welfare of the country’s blind people, mainly with funds raised by their daily lottery known as ‘el cupón de la ONCE’.
The main prize on Saturday is a payment of €300,000 plus €60,000 a year for 20 years, a total of €1.5 million — a nice win if it comes your way.

But even if an islander doesn’t have the winning number, Majorca gains something from the draw: a nice bit of free publicity for local cooking…especially when (hopefully) some Spaniards start to ask about arrós brut. The Catalán word ‘arròs’ is similar to ‘arroz’, so people on the mainland will know it’s a rice dish. But what else is in it?

An arròs brut is one of those multi-ingredient dishes that constitute a meal on a plate. It’s hearty rustic fare for which the ingredients could be chicken, rabbit, pork spare ribs, pigeon, wild mushrooms, peas or green beans, red peppers and artichokes, with seasonings such as, onion, garlic, aromatic herbs, leaf celery and sometimes nutmeg. These ingredients are just one possibility because like so many rural dishes there is no fixed recipe for an arròs brut: all cooks have their personal list of ingredients and they never stray from it.

Some cooks would use only a few of the above ingredients and would add others more to their liking. It could be game birds such as quail, partridge (if the budget runs to one), snails, black pudding, other cuts of pork — and some recipes even call for pieces of cuttlefish.

The name ‘arròs brut’ translates as ‘dirty rice’ but the version we eat today is never as ‘dirty’ as it was in the very old days. Originally, an arròs brut included hare that wasn’t bled properly, so its meat and liver contained a lot of blood. This gave the dish a very dark colour — which is why it became known as ‘dirty rice’.

There’s no hare and no blood in arròs brut nowadays and even when it contains a dark-fleshed wild pigeon or other game, the ‘brut’ part is seldom more than an anaemic shade of grey. But I don’t know of any restaurants that put game into their arròs brut, so we are not getting an authentic version of this dish. One of the difficulties is that new laws and modern food industry methods have turned this dish into a travesty of its old self.
In the past a few thrushes were enough to give the ‘brut’ colour because this bird has extremely dark flesh. But about 15 years ago a new law banned the sale of thrushes.
During the season, people can still hunt for thrushes but they are allowed to catch only 12 per day per person — and none of them can be sold. Even if a restaurant cook hunted his own 12 thrushes, he couldn’t turn them into a dish for his customers.

This shouldn’t have presented too much of a problem, because an arròs brut can be made with other kinds of game, especially wild pigeons, quail or partridge.

But restaurant cooks, and anyone making an arròs brut for Sunday lunch, then come up against another problem: quail, partridge and other game are farmed nowadays and their flesh isn’t as dark as that of wild birds. Nor do they have the same rich strong taste, another essential characteristic of an authentic arròs brut.

The result is that an arròs brut these days is never as ‘dirty’ as it should be, except in those island homes that have access to a supply of wild game. During the hunting season, wild game is sometimes available at supermarkets and the Mercat d’Olivar, but it is much more expensive than the farmed kind.

The cost rules it out for most restaurants because it would make their price too high. And most cooks would rather roast expensive game or use it for a more sophisticated dish.
So the chances of getting a genuine old-fashioned arròs brut in a restaurant are almost nil and the only way you can cook one at home is to spend lot of money on wild game —or to go out and shoot your own.

But even with enough money in your pocket, it’s difficult to find wild game, so the only solution is to make an arròs brut that isn’t at all ‘brut’.

However, all is not lost. An arròs brut without wild game is still a most satisfying dish to make and eat — and it’s easy-peasy, partly because it allows for a certain amount of improvisation.

Like all country dishes, the ingredients depend very much on the season and what you actually have at hand. You can make use of a wide variety of seasonal veggies as well as meats including pork, poultry and farmed game.

Pound the garlic in a mortar with a little salt. When reduced to a paste, add the parsley leaves and continue pounding. Chop the livers and add them to the mortar. Pound until everything is reduced to an almost paste-like consistency.

An arròs brut must be cooked in a greixonera, the traditional Majorcan clay dish in a wide variety of sizes and depths. If you don’t have a range of this essential Majorcan cooking utensil, now is a good time to buy one…and then build up a collection of different sizes.

The above ingredients constitute just one of the many variations on the arròs brut theme. You can omit some of them and include others. Many Majorcans would want to add a few snails. If using them they should be cooked beforehand and stirred in at the same time as the vegetables. Allow at least 300 grs for four people.

A tender pigeon is a good alternative ingredient because its flavour and dark flesh will give the arròs brut a more authentic look and taste. But an old stewing pigeon (usually sold at the market as ‘paloma’) is a tough bird and would have to be simmered separately until tender. Be sure to add its stock to the rice.

The picada is an essential part of an arròs brut. It contributes extra flavour and the liver helps to add a touch of ‘brut’ to the dish. If you can get rabbit or pigeon livers, or those of any other game bird, they will give the arròs brut a more genuine colour and taste.
An arròs brut should be somewhat soupy. Some people like plenty of stock on their plate, others lots of rice and some prefer only a small amount of stock, thus making the arròs brut thick and silky. The person serving the dish at table simply ladles it out according to personal tastes.

The thick and silky finish is known as ‘lechoso’, or milky. You can get this effect by using two and a half measures of stock to rice, stirring frequently and gently with a wooden fork.

But if you know that some of your guests prefer a soupy arròs brut, then allow five times as much liquid as rice. Some Majorcan housewives make a thickish arròs brut and have extra boiling stock on hand to add to the plates of those who prefer a soupy version.
In the above text I have given several pointers on how to make your arròs brut as genuine as it can be with the ingredients that are available at market stalls and in supermarket.

An arròs brut is very much a rice dish and I’ve used the word ‘arròs’ and rice throughout the text — but I’ve given no indication of the kind of rice you should use. I’ve left it to the end in order to underline that the most important ingredient in any true arròs brut is not the poultry, the pork, the veggies or any of the flavourings. It’s the rice.

You could make a passable arròs brut with any of the Spanish round varieties, the ones we use for paella. But no matter now marvellous it turned out to be, it would never qualify as an authentic arròs brut. In a pukkah arròs brut only one rice is acceptable: it must be the variety that is grown in Sa Pobla.

This variety, known simply as ‘arròs de Sa Pobla’, could have been tailor-made for arròs brut because it is somewhat like Italian risotto rice in that it can absorb great quantities of stock without overcooking and bursting.

That alone makes it the perfect rice for an arròs brut, but it has other qualities that make it unique. It is such an important part of a genuine arròs brut that I will write about it more fully in next week’s Thursday food page.

Andrew, which is the best restaurant for Arrós Brut on the island. It is one of my favourite dishes and with winter coming a perfect meal.

Just wondering if a Chinese black chicken (a silkie) would be a good substitute for thrushes in arros brut for those living near a Chinese market.